I want to be really honest with you. I’m not someone who likes to watch courtroom shows. I did have a stint with Ally McBeal.. but didn’t we all? I think there was a lot less television to choose from back in those days. We had to watch Ally because if we didn’t… what were our other options? 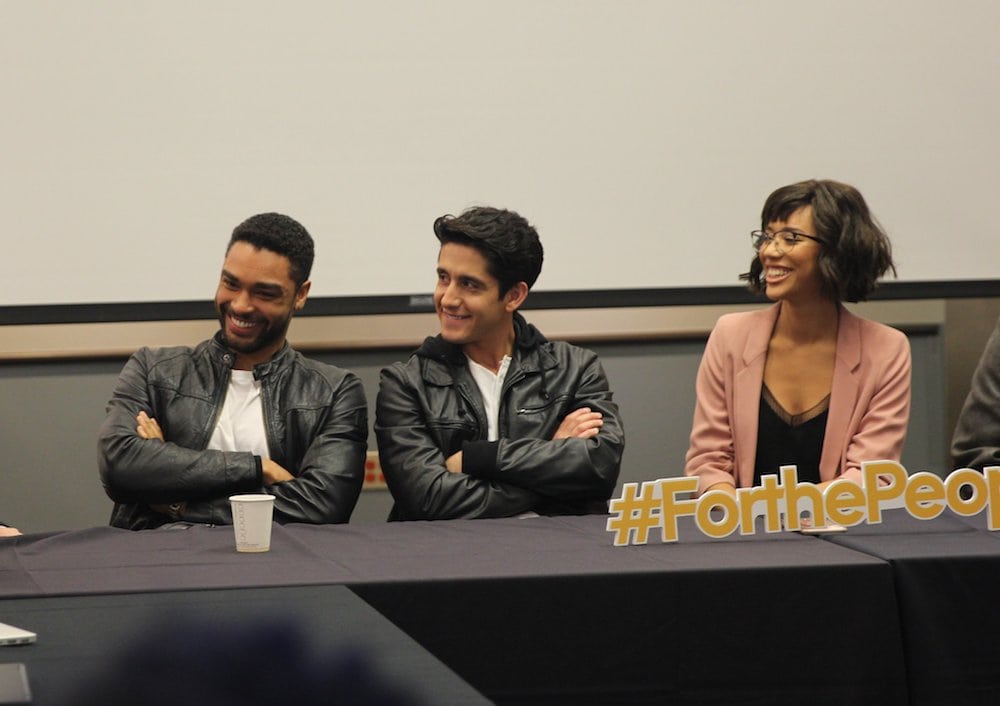 Since then, I’ve stayed away from courtroom dramas. I never really found them particularly appealing. However, on a recent press trip with ABC and Disney, I was asked to screen their new title, For The People, and was pleasantly surprised.

Not only did it show the very human side of lawyer-ing (yes, that is a word – pretend with me), it had me confused about who I was rooting for by the end of the first episode.

For The People On ABC: Courtroom Drama With A Twist

Typically, when you start watching a series, the heroes and the villains are pretty easily defined. Whether it be by their actions or by their characteristics. One eye and lots of tattoos?

Usually not the school teacher/ humanitarian. Casting is funny that way. But For the People doesn’t follow your typical formula. The good guys aren’t always what they seem and the bad guys have good hearts. So, who do you end up siding with? Noone? Everyone? How do you decide? I’m so confused! And I like it!! 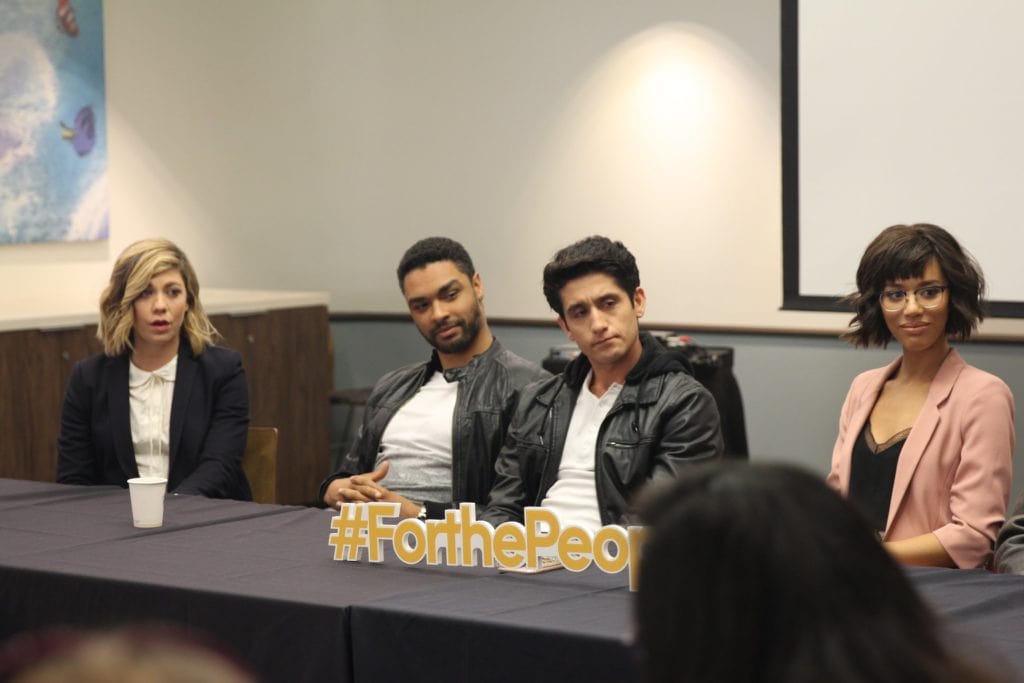 For the People Cast Interview

A full panel indeed! During our chat we opened up about why this show was important to create and how the actors prepared for the roles.

I loved to hear that a few members had very hands-on experiences. For example, Rege said that he spent some time with people in the justice department to get a real feel about what it was like as a lawyer. 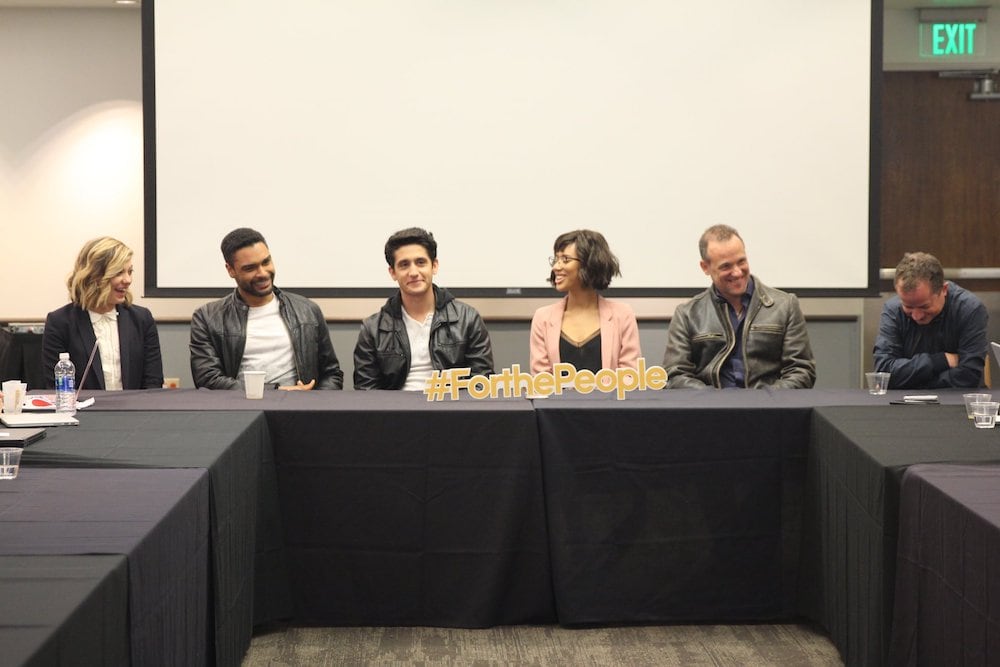 …got into contact with a couple of folks in this city.  I went to court in Compton, which was an experience. I didn’t know before I started working that everyone has the right to go and just watch justice happen. You can turn up and watch a case with very-very few exceptions which is incredible! It is so important for justice not just to be done but to be seen to be done.

Being in that environment, in a courthouse environment and feeling people work at an incredibly high level, with people’s lives in their hands every single day is an extraordinary thing and something you kind of need to feel before you can take it on.

Just the fact they walk into this courtroom every day, real people’s lives incredibly intricate complicated stories. You have to boil that down and deliver it to the jury with all the technicalities involved and essentially either save lives or not. And you are doing this with ten other cases on your back and five calls coming in every ten minutes.

I never really thought about watching court cases in action, but after hearing Rege talk about his experience, it definitely sparked my interest. For the People – on the radar. 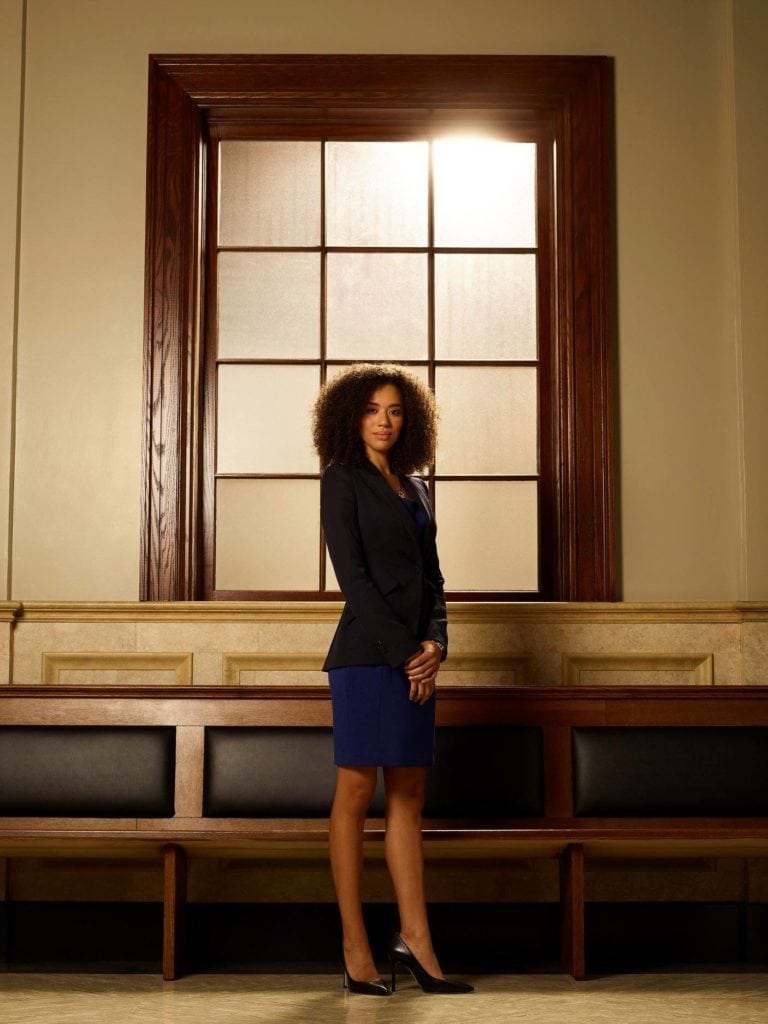 The Fort the People ABC group was very open and honest about all of their feelings towards their new roles. Jasmine mentioned that while she researched each episode, she truly questioned about whether or not she had the right job.

Some of the cases that we deal with on the show are really heavy and can be personalized to things that we’ve dealt with or that family/ friends have dealt with in life.  I think it’s a testament to the writing because every episode – around halfway through – I question whether I should quit acting and become a lawyer because this feels so good.

I can fully understand this. Imagine diving deep into case after case and seeing certain injustices fly under the court’s radar. Playing that part must feel frustrating at times. I would feel helpless thinking about all the people these fictitious storylines might coincidentally resemble.

As plugged-in social justice warriors, you can’t help but want to fight the good fight. I wonder if any of these actors will eventually make the switch? Can you imagine?! My bet is on Jasmine. 🙂 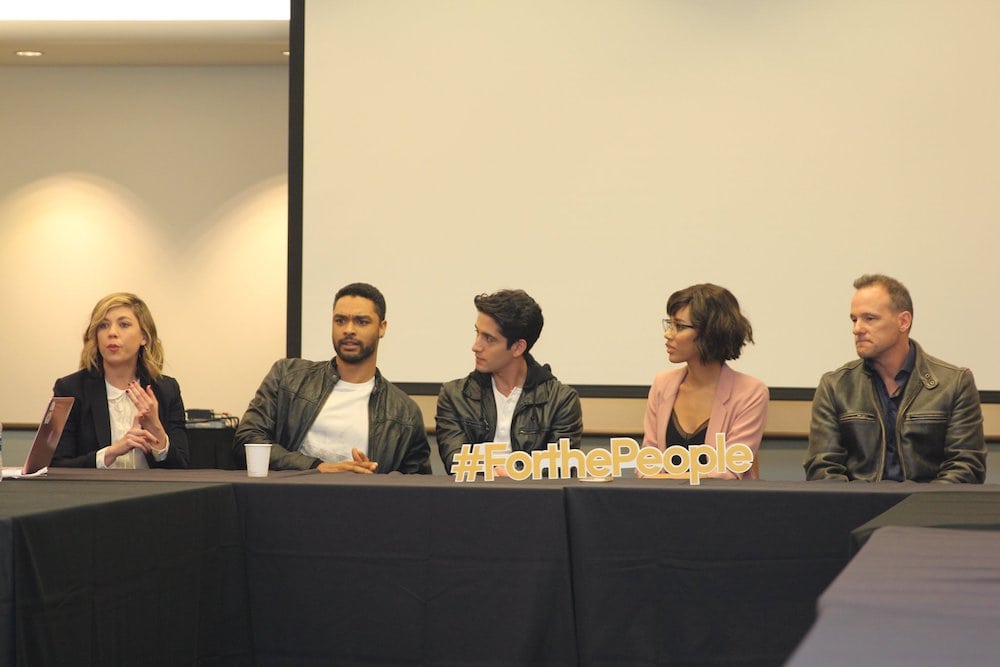 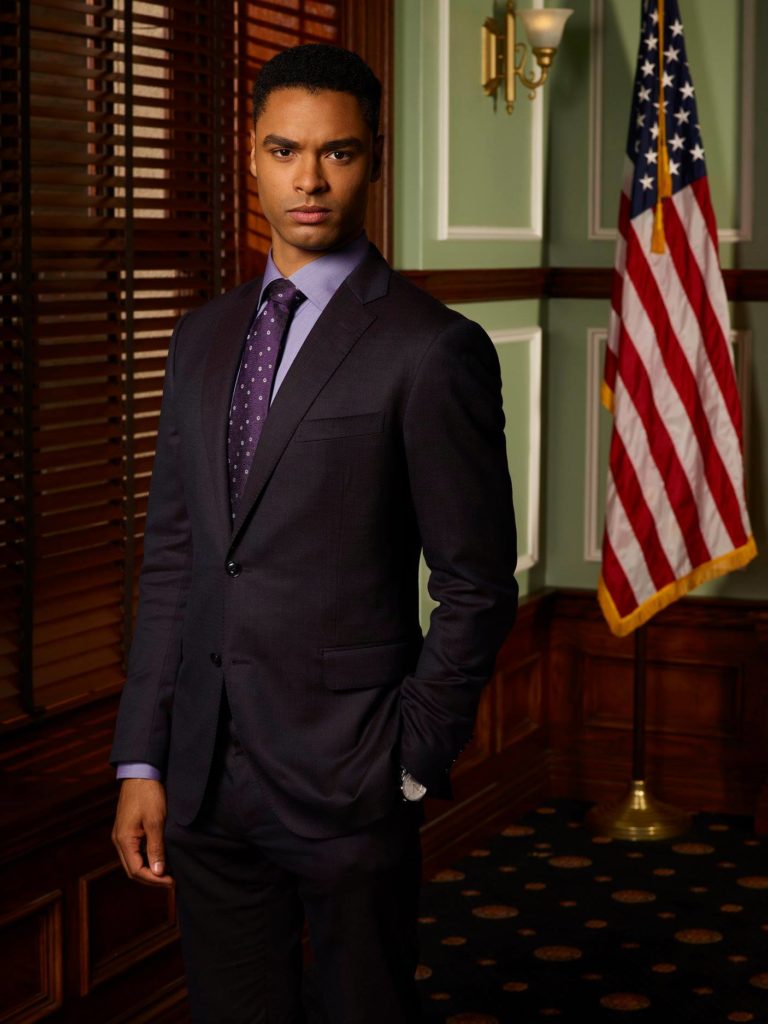 Rege said that he didn’t take this role lightly. This notion also rang true while filming Roots. The group wanted to know if he felt any pressure while working on For The People.

There are quite literally millions of people relying on you to give them something with nutritional value. And so that’s kind of how I try to approach both George (Roots) and with this because I think this is incredibly important.

I think that it will always be relevant but certainly at the moment how you react as a human, how you interact in a human way with the institutions that prop up and create this country and what does actually make it great is incredibly important.

Humanizing that and delivering that and having a conversation about that and being able to keep that in the forefront of people’s minds is important. When it’s important then it’s easy to go to work.

Nutritional value. I. LOVE THAT SO HARD! 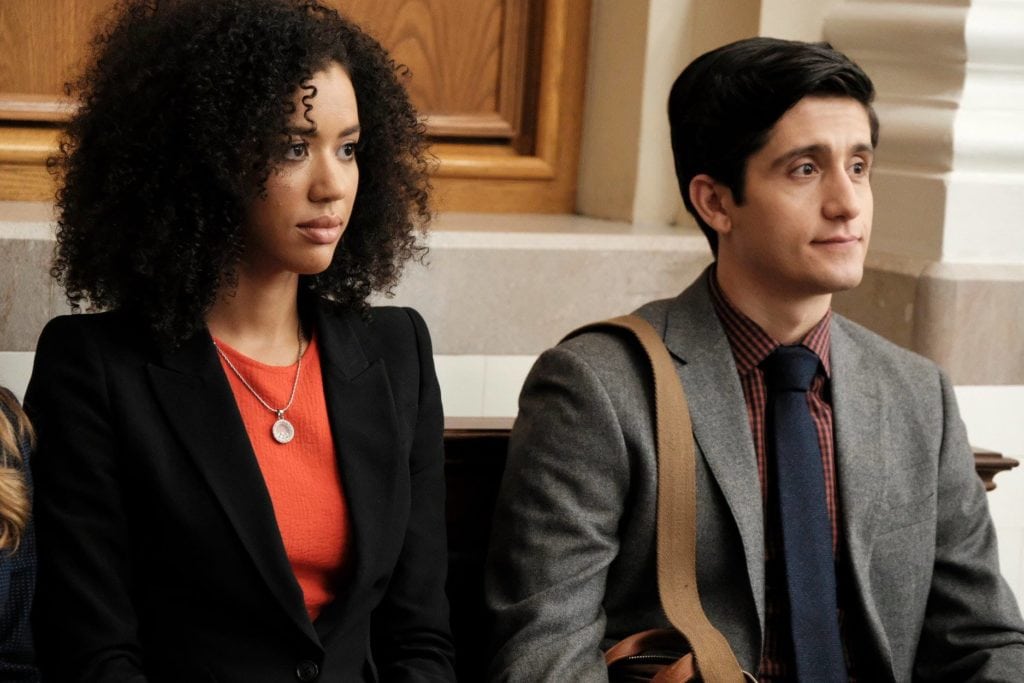 What do the writers have in store for For The People during season one and beyond? I am always curious to hear the big picture (if they allow us to).

I really wanted to stay focused on our core group. We’ve got ten incredible actors and it is a true ensemble to give everybody an opportunity. And again it’s in every episode, everybody is there and they’re doing great stuff.

But to really be able to focus on some of the individual characters through that first season. And that will probably be true through at least a portion of season two, if there is one, which I hope there is.

Then I want to continue to grow our world. So that there are defense attorneys that are outside of it.We use a little bit of that in the first season, but we really are focused on our core characters. There is a lot of room to grow and to bring new people in.

Crossover alert! Just kidding. I don’t know if there is anything up their sleeves, but we shall see. We have several lawyer shows on ABC that can totally pack a punch together. What do you think? 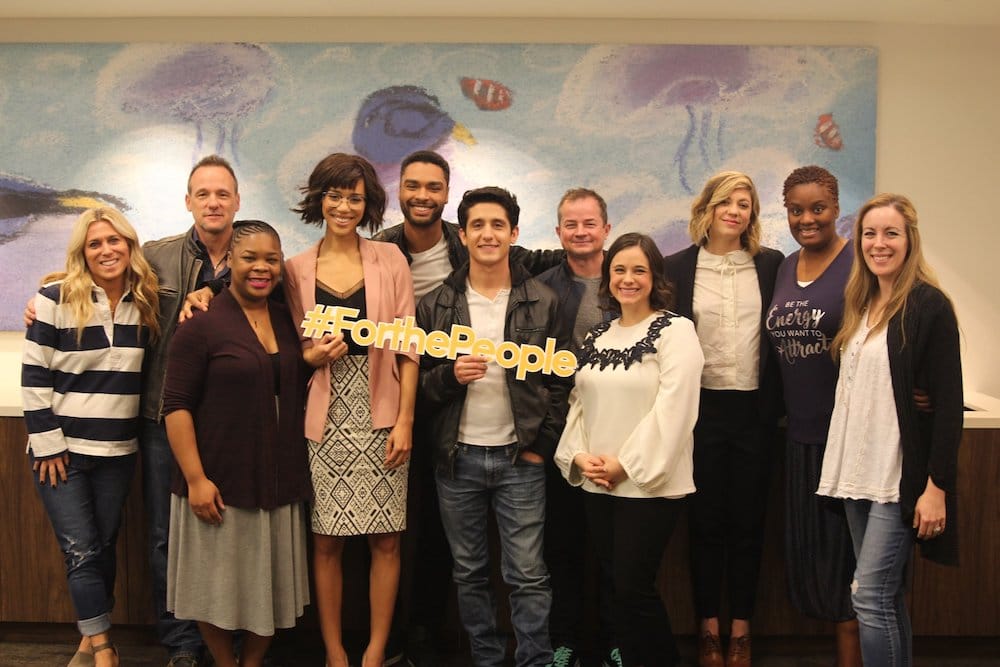