Zoe Saldana is probably my favorite person to interview. Period. I’ve done it once before while on set of Guardians of the Galaxy Vol. 2 while they were filming last year. So, it was an absolute pleasure to be able to sit down with her once again and to hear her perspective on life as a superstar, mom and all around kick-ass female. Zoe Saldana gives me life. Period. 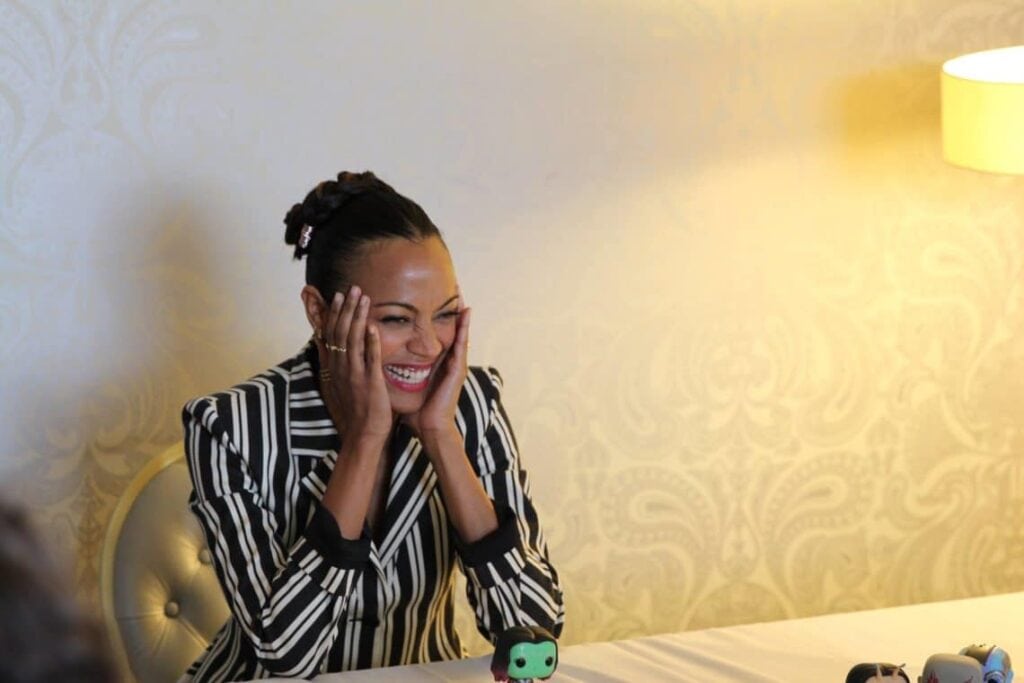 The group attended the Guardians of the Galaxy Vol. 2 red carpet premiere the day before. So, we saw the film and had plenty of questions. You know I’m not one for spoilers, but I will say that we have the opportunity to dive a bit deeper into the wedge that splits Gamora and Nebula. We get a taste in understanding why Nebula hate Gamora as much as she does. And it took us all for a spin!

I loved it. I loved it. I was very excited, there were three female, you know, characters in this movie, and they all were going to provide, like, three different essences, you know?

Like, ’cause Mantis is like, just resembles, like, such an innocent creature, and Nebula’s so angry. She’s so angry. And Gamora is so like, maternal. You know, like, she’s turned over this new leaf. Like, in the first movie, she was so selfish. It was about getting away, and running away from her father.

And now it’s like, it’s about keeping this family together, you know, and keeping them always on track. So she went, like, the opposite of who she was in the first movie. 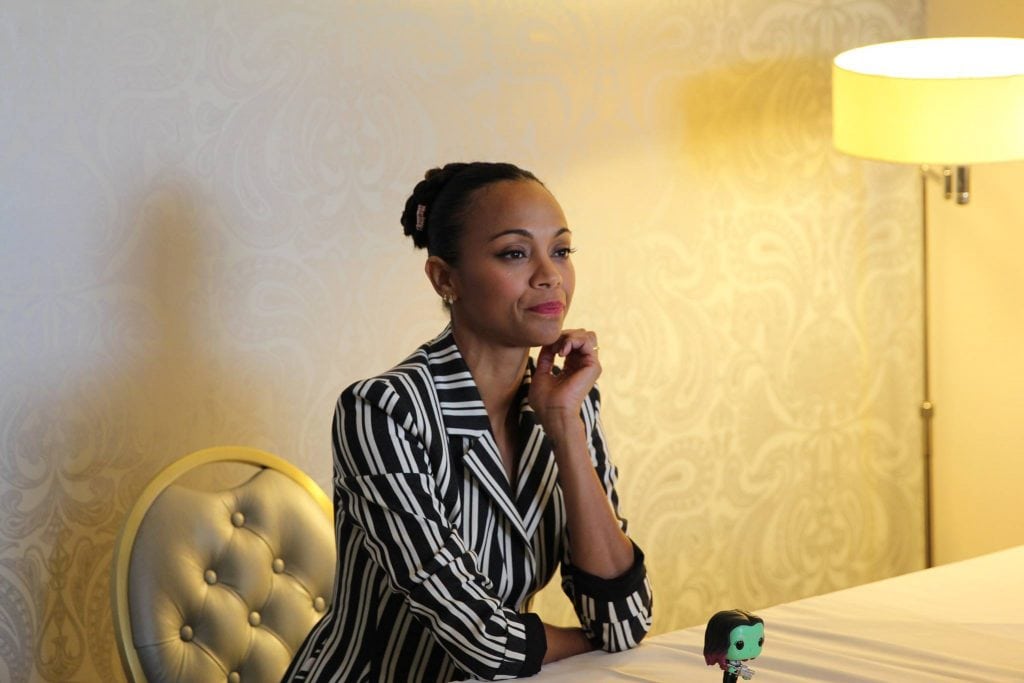 Where does Zoe Saldana get her inspiration from when playing Gamora? It’s not from within. She actually turns to one of her sisters for that!

You don’t take any responsibility, you don’t finish what you start, and you never obey your parents, you know? So, that was me. And, so channeling something in Gamora, I think I was just thinking about my sister and the responsibility that she must’ve put upon herself to help my mom, like, raise Cicely and I, my younger sister and I.

As an only child, I am utterly unfamiliar with these dynamics. My three children are too young to take on any of these roles. But I am watching!!

Related: Go one on one with DRAX – Exclusive interview with Dave Bautista 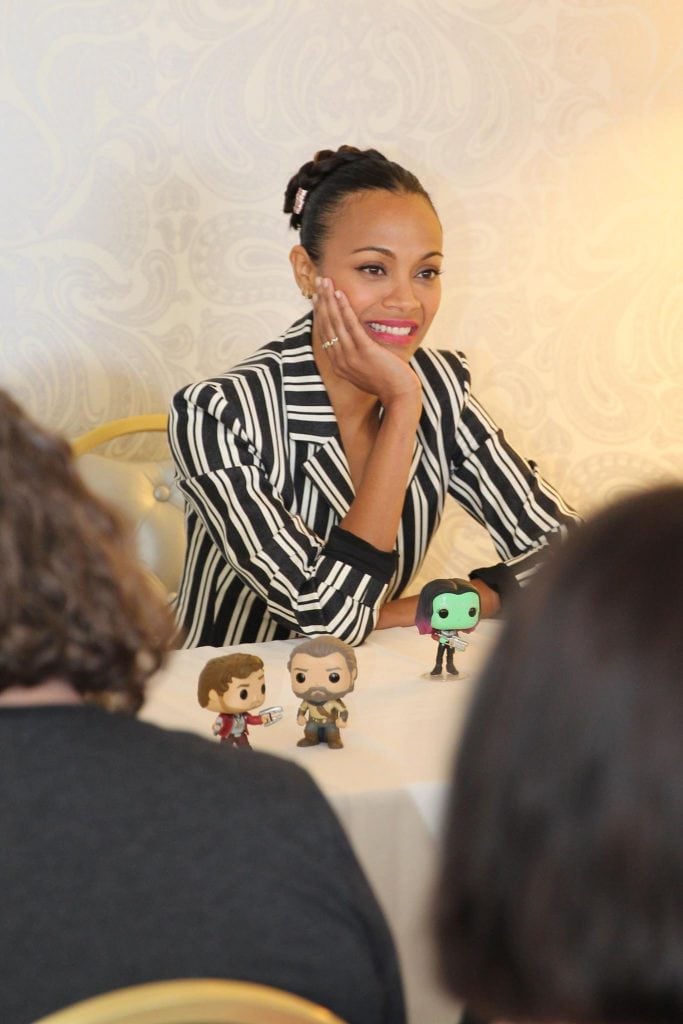 Zoe is known for her female empowerment roles. One right after the other – it seems like they are the only roles she attracts as of late. And you know what, the mom of three is ready for a little break.

I love it. I do, I do. But, you know, I, I would like to take a break from, from playing, you know, kick ass science fiction females. I’ve been doing it for over 10 years, I’m kind of tired.

When I was little, I only had two icons that I can reference, and I, I would watch those movies until my tape would break. And it was Ellen Ripley from Aliens, and it was Sarah Connor from Terminator. And I would watch these movies endlessly.

And then it was like, Jamie Lee Curtis, when Katherine Bigelow did that movie, Blue Steel, and James Cameron also did that movie, True Lies, like, I had her as a reference. But other than that, I was always like, watching action movies told through the eyes of males and stuff, but always feeling that gap, that void, you know?

I feel like I did take it upon myself to just be happy with the fact that I took a gamble on these movies for a first time, they ended up being super special, and they went into, into sequels. I didn’t think of this, trust me. It was not my idea.

And I just, I had my responsibility to fulfill them. But once I was there, I didn’t want to be better about it. I wanted to acknowledge that maybe, maybe it means something. Maybe it is important that I’m a part of those women that are filling in that gap, so that women can have, I don’t know, more options, more references to look into. 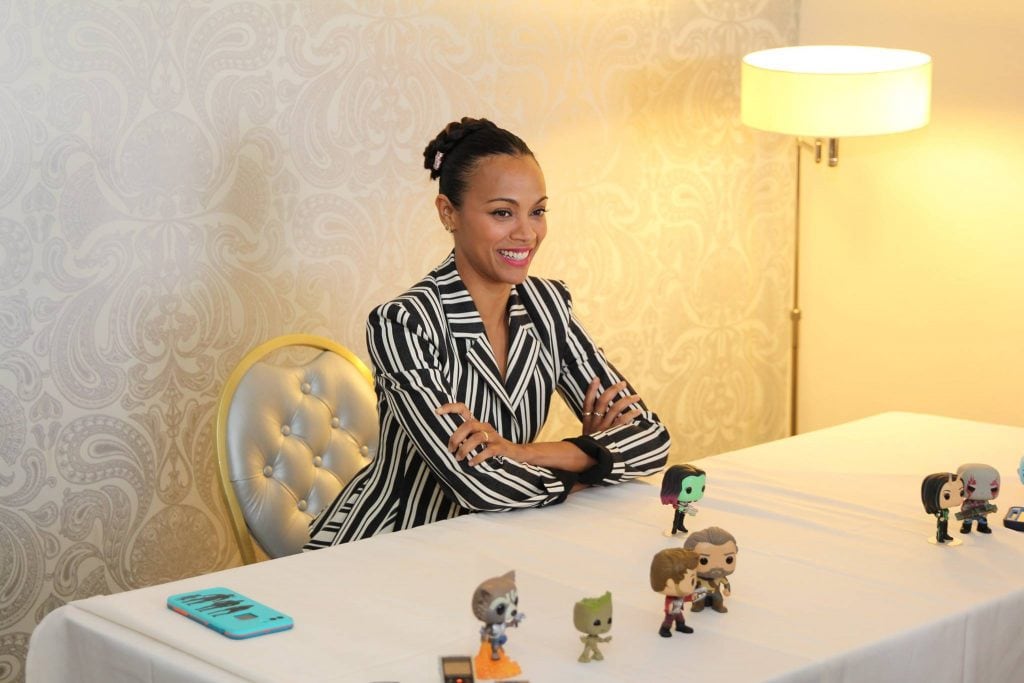 A Deeper Look At Gamora

Gamora when you look at her from a surface-value, I think right away you see strong and driven. But Zoe – having played this character in a very intimate way – wants women out there to take away other traits from her.

I think that it’s okay to still be vulnerable, and be strong, you know? I think that for some reason, we take it upon ourselves, or where we’re told, that, in, you have, you have to be one thing or the other. And I think that vulnerability is strength, and being strong that means that you have to be vulnerable.I hope young women take that. ’cause Gamora, I don’t see Gamora as a strong character. You know, like, I see her as someone that’s tired. Annoyed. And, but she’s very vulnerable.

I respected this and loved her angle. Big time! 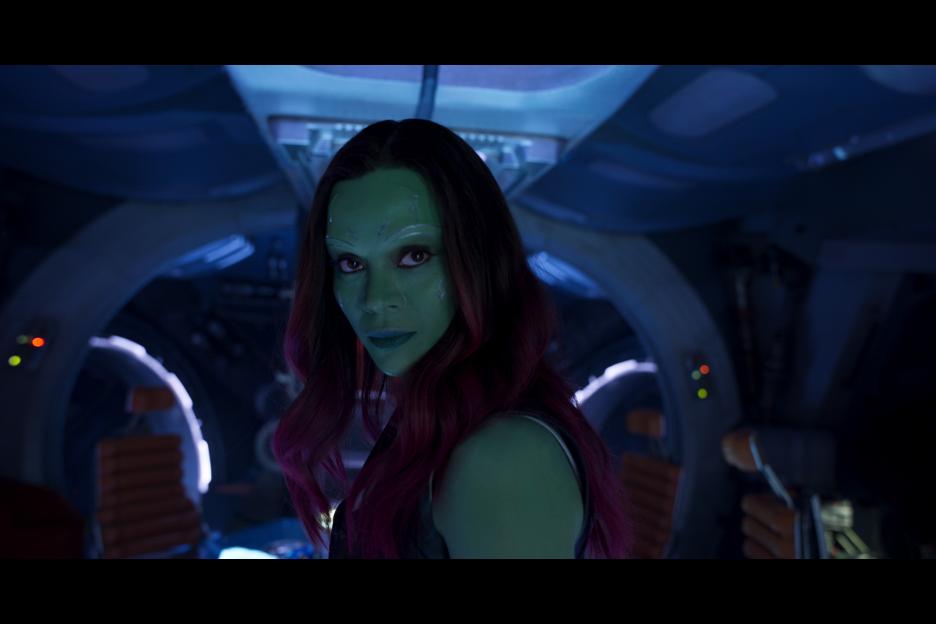 Related: All the Guardians of the Galaxy Vol. 2 Toys you want to know about – including Baby Groot dancing! 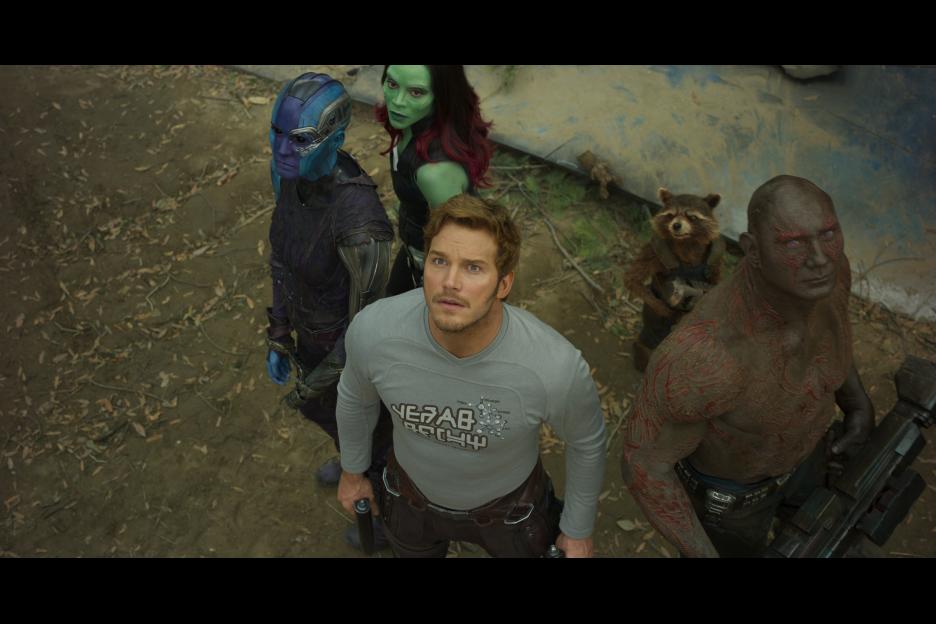 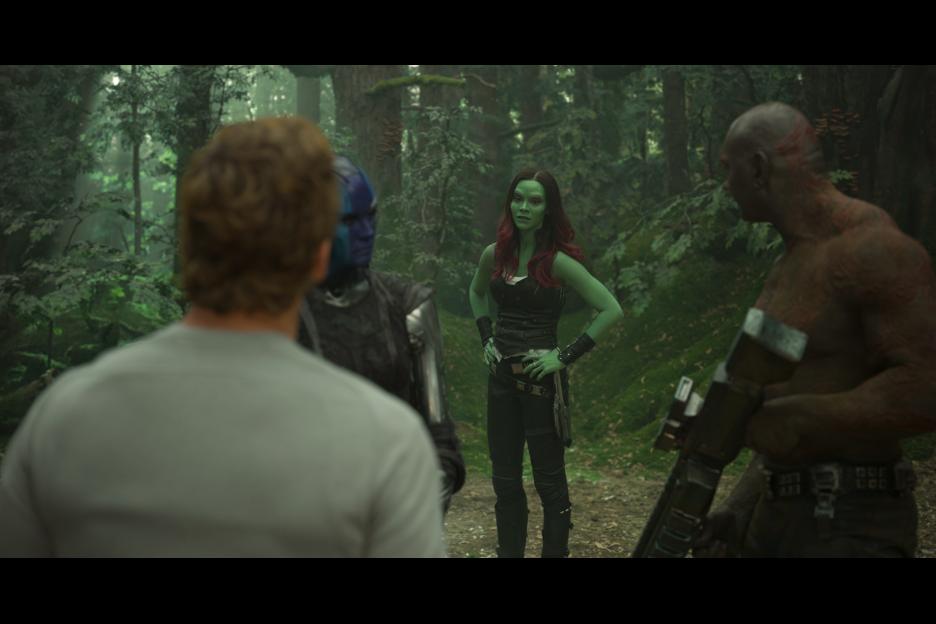 We even talked about favorite scenes – we had to ask! Zoe Saldana opened up about a very emotional one for the audience.

There’s that scene with Nebula and I, and, in the end, where I’m trying to the best of my abilities to offer her an apology for what she feels that I did to her, for what I really did to her. But I’m also trying to sort of like, bring clarity to her, so that she can understand that I, that what I was trying to also survive, you know.

And, I wish that scene would’ve been a little more emotional for Gamora’s end. But I also, now that I see the movie for the second time, I really respect the fact that James Gunn has a vision and an idea of an arc for each and every one of these characters, and what they represent, as a family unit. And Gamora is this just unbreakable support, you know, wall, that everybody sort of like, leans on to.

So there’s a lot that she can reveal, but it’s always within measure. And I think he’s pacing her out. I mean, at least I hope he is. But it was very beautiful because I felt that this is the first time that Nebula and Gamora were able to start the process of like, closure. At least Gamora would like to think it that way. She left the door open, so that Nebula can just come back whenever she wants to. 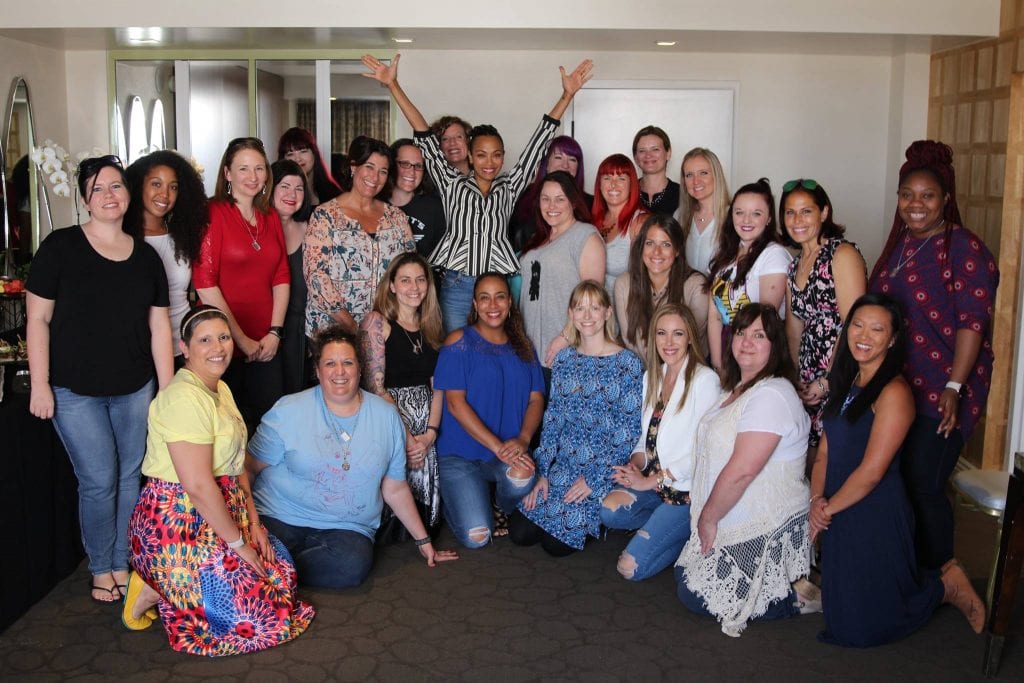 Since we are all being honest here… I wanted Gamora to feel something more there as well! Like in a big way. But I trust James Gunn and I am just going to run wherever that boy leads me!

So, if he wants Gamora to be a bit reserved this movie – you got it. I am with you! But while I was in the theatre, I was leaning in a bit hoping for more closure. I guess that’ why there needs to be a Guardians of the Galaxy Vol. 3! Right?

Are you planning on seeing Guardians of the Galaxy Vol. 2? I mean – I HOPE SO! TO see all the interviews that I’ve written up so far – including Chris Pratt – click here. 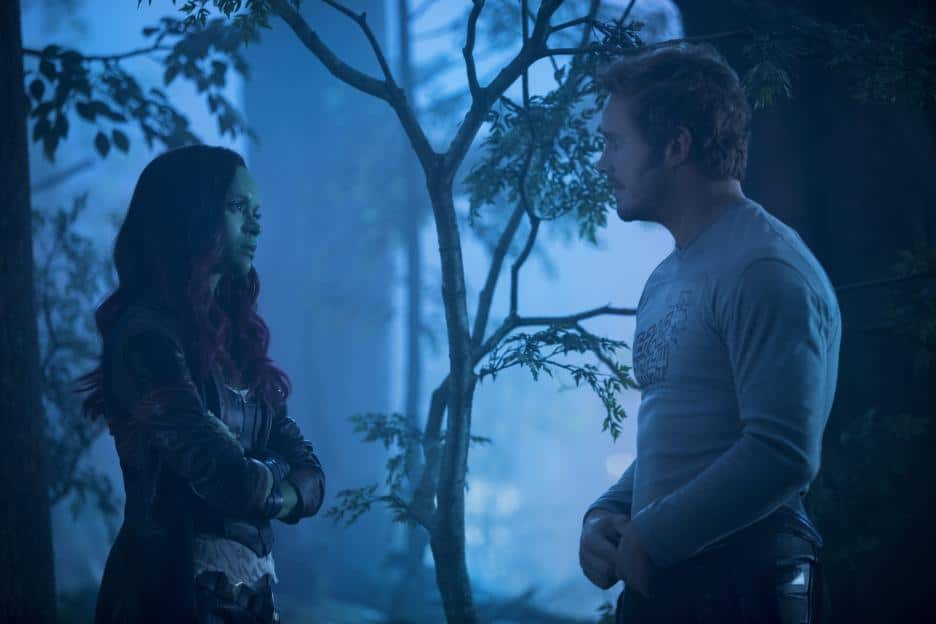 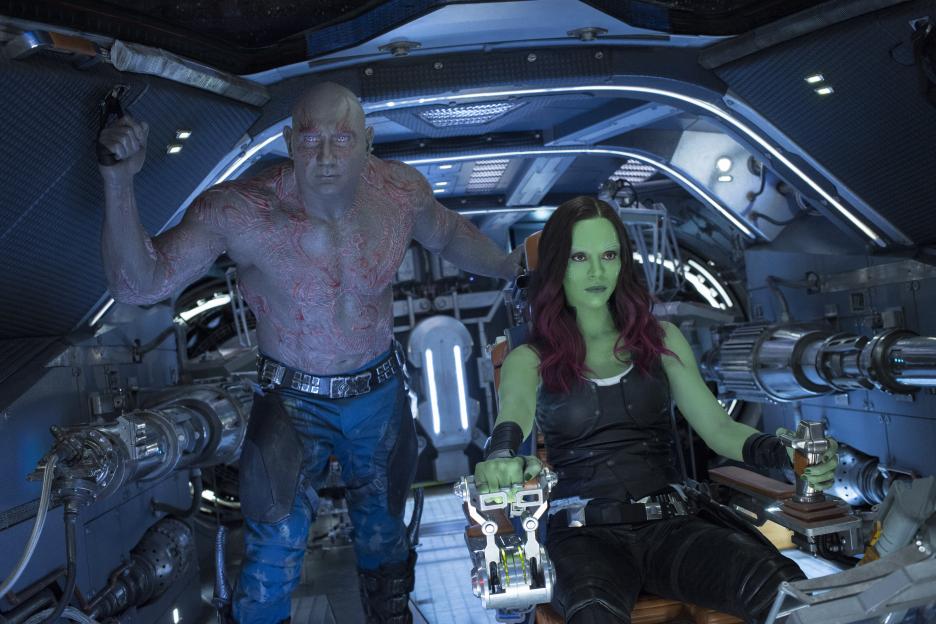 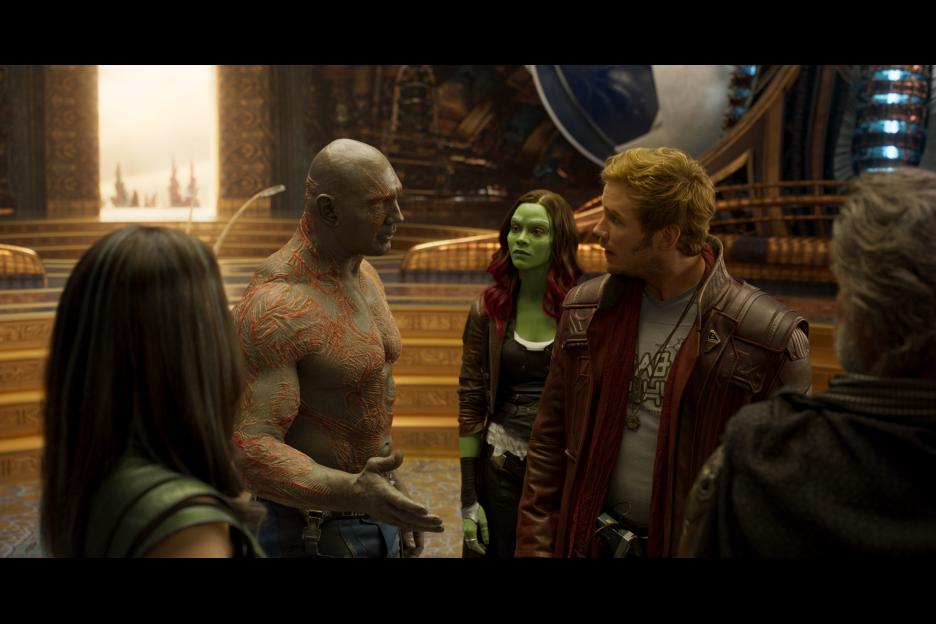 *Disney invited me to attend the Guardians of the Galaxy 2 premiere and interview Zoe Saldana. All opinions are my own.