I’ve done quite a bit of flying over the last few weeks. Heck… I even have another trip planned for this Saturday.

It seems that most of my time is being spent in the air as of late. I’m not complaining. My job sometimes requires me to hit the road and I have to go where the money is. Travel is part of my life.

‘Tis the life of a blogger. No stability and all that jazz. 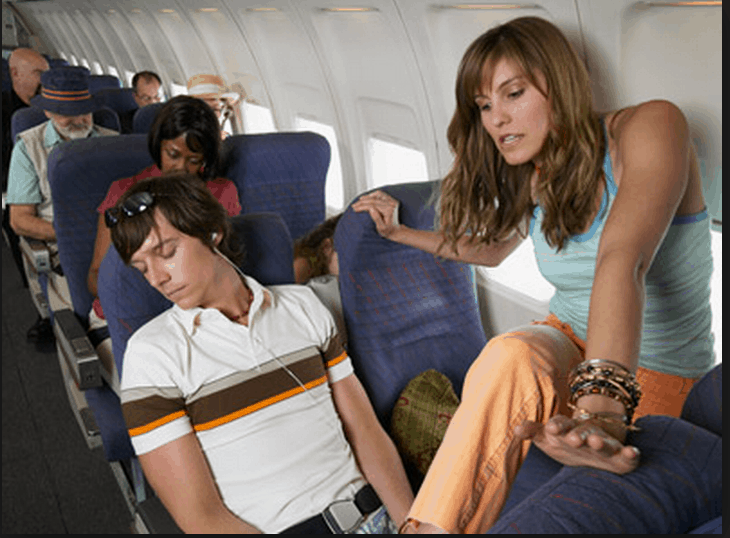 On my way to Las Vegas, I was upgraded to first class (thank you Delta) and I sat across two strangers – one uncertain woman and one overly confident man. Right away, you could tell the difference in character. I knew this travel trip was going to be a blast.

The woman wouldn’t take the initial drink because she was “all set” while the man demanded blankets and a headset all while downing two vodka cranberries before we even began to taxi away from our airport gate.

None of my business… but I do love to people watch.

The man eventually fell asleep and I noticed the woman squirming a bit. She didn’t want to wake him, but she needed to go to the bathroom.

She somehow managed to get out by jumping over his body. She connected with him which of course woke him up and then they just stared at one another as she was straddling him.

Awkward. But I get it. She was trying to be nice. I get it.

Women! Stop Climbing Over Men To Get Out Of Your Airline Seat

When she returned from the bathroom, the man was obviously awake (and what a way to wake up, right?) but he didn’t move. He stayed in his seat and let her squeeze her way back in and OVER his body. I became rigid.

That was an intentional decision. He could have gotten up at that point as he KNEW she was coming back. Yet, he decided to stay put and she didn’t ask him to get up for her.

But I was supposed to be playing video games on my iPad and not be all in their business. So, I literally bit the inside of my cheek to shut myself up.

Mind you, this is a long flight.

Eventually, the woman had to get up again. Stranger man next to her wasn’t sleeping and AGAIN she straddled him to get over him. I just about hit the ceiling.

I turned to him and gave him the nastiest look to physically portray … “YOU PIG! STAND UP. SHOW SOME RESPECT. WOULD YOU LET A MAN STRADDLE YOU LIKE THIS?? I THINK NOT.”

But he didn’t notice my stares because he was too focused on the woman’s a** in his face. I swear he was enjoying every second of this plane ride.

She was timid and awkward and self-conscious. She didn’t look like the person that would stand up for herself and all I wanted to do was SHAKE HER.

YOU DON’T HAVE TO STRADDLE STRANGERS BECAUSE YOU DON’T WANT TO INCONVENIENCE THEM FOR 2 SECONDS. MAKE THEM STAND UP!!

I was literally PISSED the entire plane ride to Vegas. I hated the man sitting next to me and I hated every man just like him.

I wanted to befriend the woman and teach her to value herself and I wanted to enact a law in Congress that forced all passengers to get up for those in the window seat – no matter how tired they feel. And then we landed.

I gave one more stank eye to the man before I left. He literally had no idea why I was so upset and honestly, I wasn’t going to get into it with 100 passengers behind us trying to get off the plane.

But I sent him all type of ill wishes and made a promise to myself right then and there that I would write this. Flight etiquette should be announced somewhere along the ride.

“No smoking in the lavatories. Stand up for the passengers next to you when they have to go to the bathroom. Devices over 2 pounds must be put away for takeaway.”

It’s really only one sentence but I think it would make the world of a difference. The LONG SHORT of this entire brain dump? You are worth the move.

I've never had any question about whether I have to stand up in such situations. Being 6'4", my knees are already pressing into the seatback in front of me, even when I sit bolt upright. So, the poor lass in this case would have had to pole-vault, which is somewhat impractical.

But in this case, I think that like many guys, this dude simply was in his own world and not taking the hint that he should move. In such cases, equal responsibility is on the other party here (even if it was a long-bearded biker dude and not a lady) to tell the fellow, "Hey - I could try to clear you in a long jump, but my feet may end up nailing you in the lap. Would you mind standing aside so I can get in?"

YES YES YESSSSSSSS!!! I had a guy refuse to get up for my KID in COACH. It took a lot of self control not to smack him.

Wow! I got angry just reading this! What an awful man! I have to say, I used to be like that woman. I don't know if it was turning 30 or having kids that made me realize I needed to learn to stand up for myself.