Last month, I flew to California and took part in an Adventures by Disney tour. It was the first time I ever participated in a group activity with Disney like this before. The focus of the tour was created for true Disney fans.

We got a behind-the-scenes look at Disneyland and into Walt Disney’s personal life. I cannot reiterate how much I loved this west coast trip! My Adventures by Disney review will give you the inside scoop of everything that happened while we were in the hands of our incredible tour guide.

I was invited to participate in this tour by the Walt Disney PR team. They hoped that I would be able to share some of the ins and out of their ABD trip. The tour I took is currently available for booking online.

You do not have to be part of the media to join one of these groups. It felt completely VIP and it IS, but this adventure is very much for the general public.

My Adventures By Disney Review

Before I tell you about my personal trip, I do want to note that Adventures by Disney tours are available in dozens of countries all around the world. You don’t have to limit yourself to the continental United States. I have friends who have taken trips all over Europe with Disney and came back oozing with pixie dust. Truly magical!

I remember when I first heard about these tours. The tour guide told me all about what my children could expect should I book a trip to Rome. Dressing up as gladiators and fighting with fake swords in the Coliseum.

Can you imagine? Each country, each trip uniquely offers something special – that only Disney can provide. This Adventures by Disney review is specific to the Californian route. 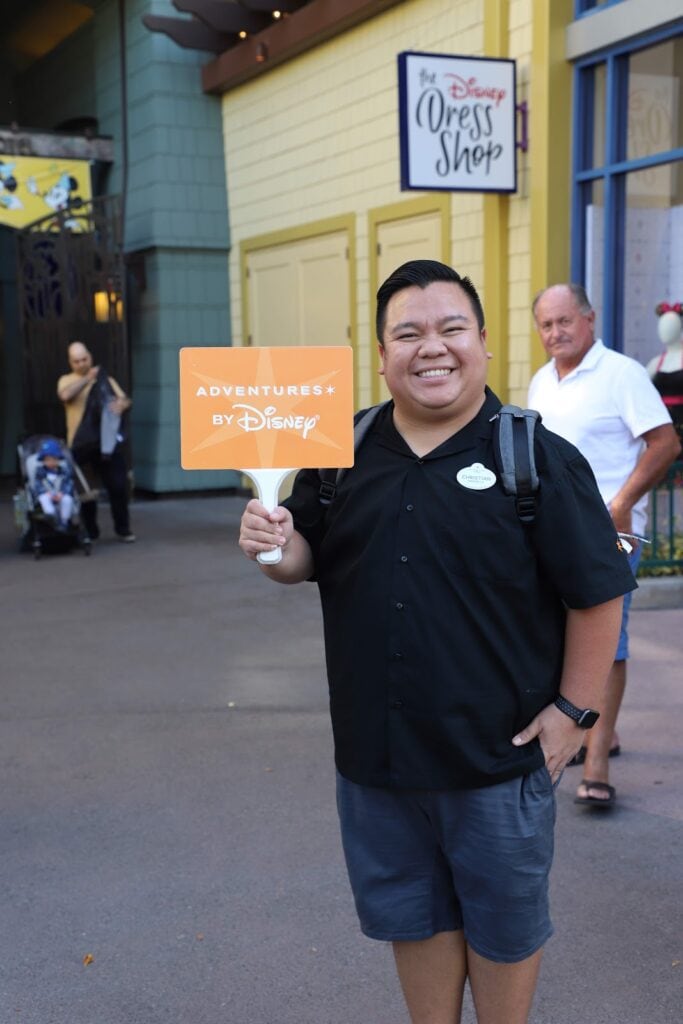 I had the pleasure of having two tour guides during my trip and this is actually quite standard. Because you spend so much time with your group, everyone ended up becoming fast friends. Whether you are traveling with your family, with a best bud, or if you decide to head off on your own, do not worry. Disney ensures that the group feels like… well, a tightknit group.

Within a matter of hours, we were all laughing and sharing old stories. I think that’s part of what makes Disney special. Everyone on the trip had a common bond – our love and affection for the mouse. When you kick off a trip with that kind of a foundation, how can you end up on the wrong foot? It’s impossible!

Favorite princesses. Best new songs! Fastest rides in the parks. We were immediately talking about our happiest memories. It was very easy to get to know one another.

When you travel outside of the US, it isn’t uncommon for Adventures by Disney to welcome local guides into the mix to ensure a better cultural understanding of wherever your group is visiting. I actually love that idea as well.

And no matter where you go, your guide will be able to speak the language. There will be no language barriers to worry about! Just because you can’t speak the local dialect doesn’t mean that your guide won’t be able to!

Disney wants to make it as easy as possible for everyone on the trip. So, book with confidence.

Related: Where Is Disney?

So, this was super fun. The first time we all gathered around in a circle, we learned that on every day of our vacation, we would each receive an Adventures By Disney exclusive pin on our trip.

This pin was one that Disney fans could only get on that particular tour. That meant that only people who took the California Adventures by Disney tour would have access to my pins.

Heading to China? Great! Then you will get a number of pins that only other visitors of China received. There are no duplicates. Do not trade these!! These are totally exclusive!! My family loves to trade Disney pins, but these puppies are not for grabs.

I thought that was such a nice touch! Getting a brand new pin every single day – and the pin always related to what we did that day! Super cute. 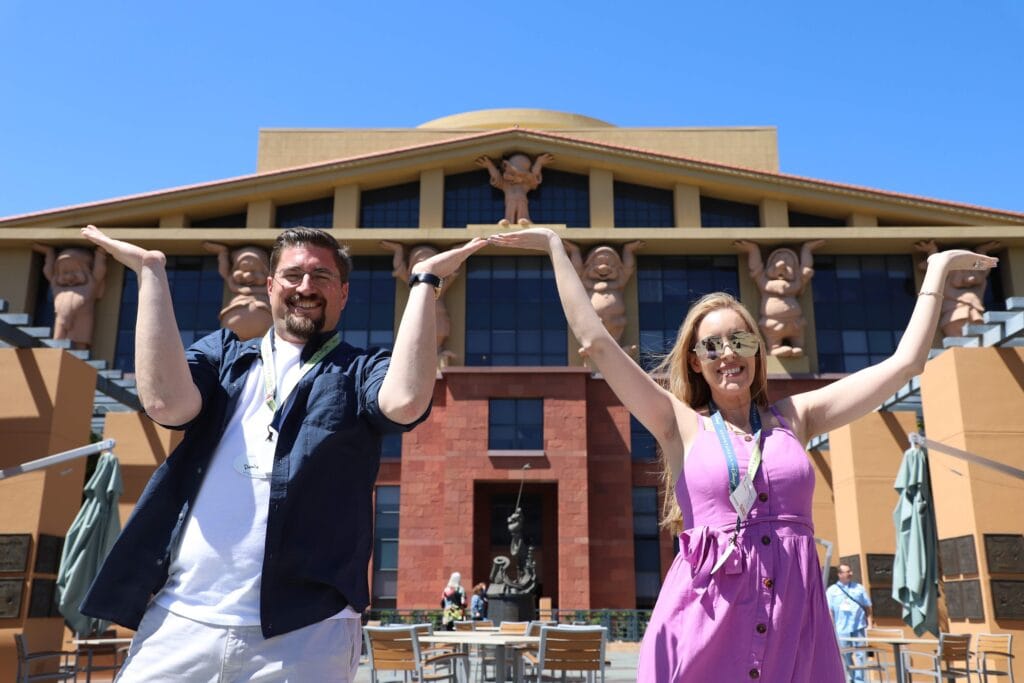 Exclusive Tours And Inside Information

Here’s what I love the most about Adventures by Disney and it would be a total MISTAKE if I left this out of my review. The company puts its itinerary on their website – most of it anyway. You could technically follow what they say they are going to do and get a gist of what the trip would feel like.

But know this, they leave out SO MUCH of the trip. They want it all to be a surprise PLUS you would miss out on all the exclusive details and secrets that only the Disney tour guides know. 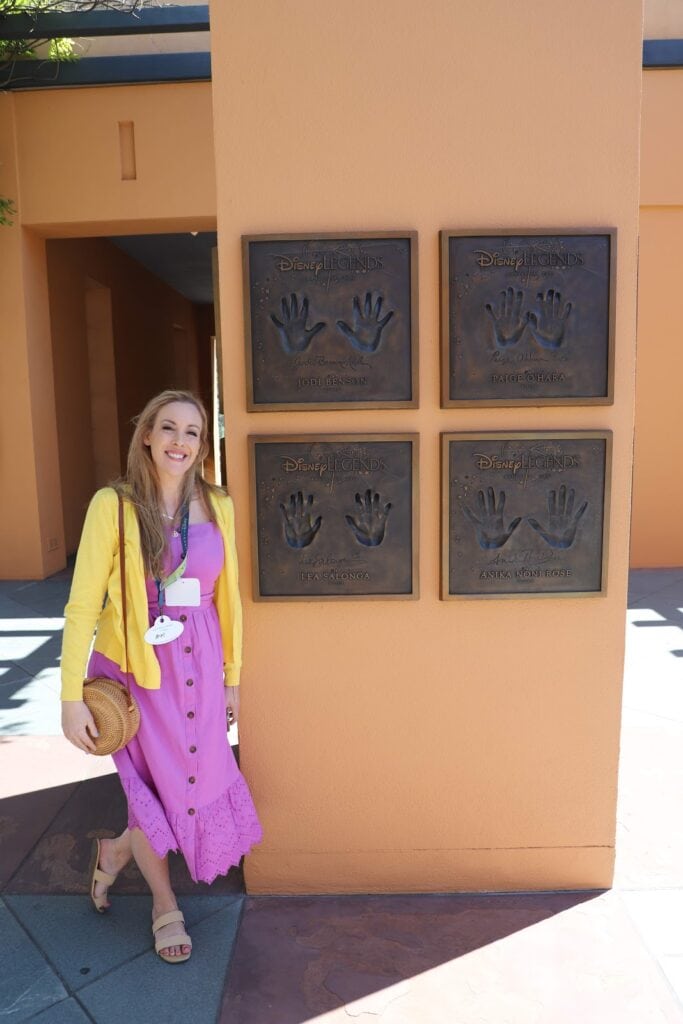 For example, I’ve been to The Walt Disney Studios a thousand times before thanks to the relationship I have with their movie department. I’ve gone to 11 movie junkets and premieres and those trips always place me right in the middle of this square. HOWEVER, I never heard the story about why the Seven Dwarfs are the ones holding up the top of this building. 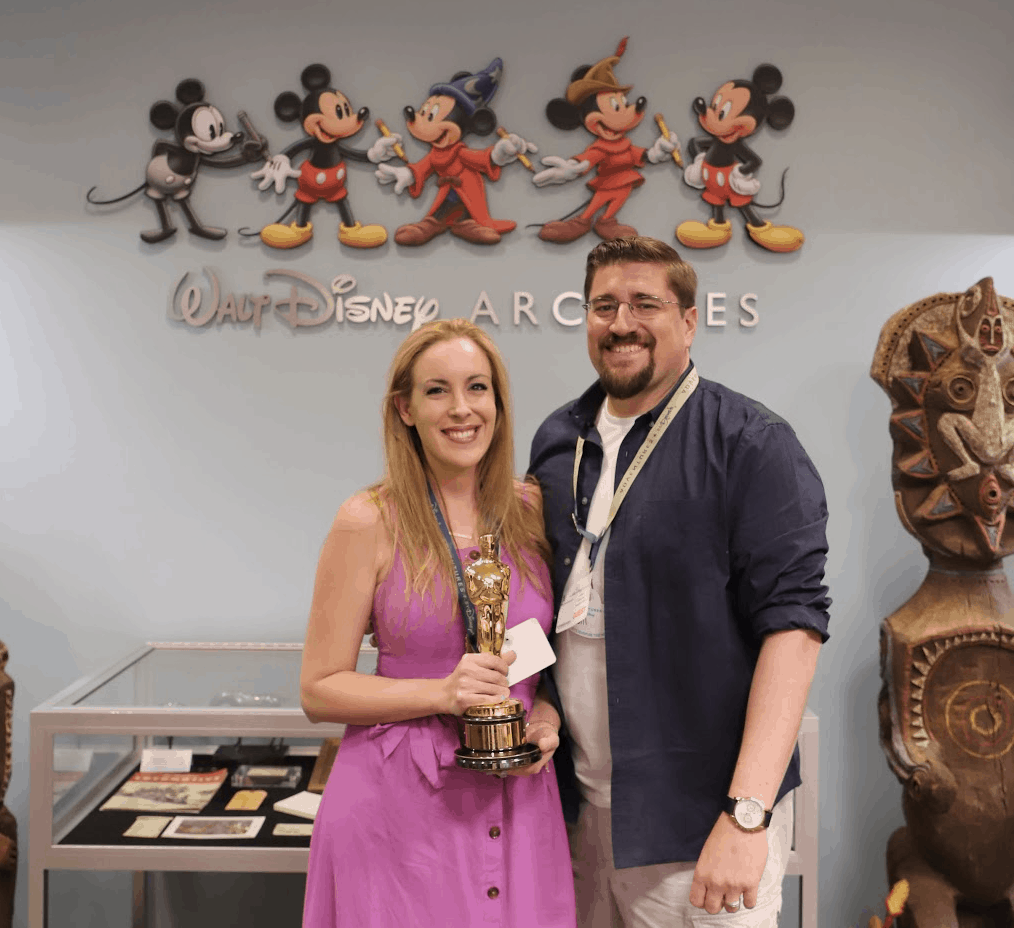 Also, seriously, what tour company will give you access to a LITERAL Walt Disney Company OSCAR statue? In your hand? That you can hold? And take pictures with? I just want to know? During our Walt Disney archive tour, we were able to all hold an Academy Award and take a photo with it. By the way, it is SUPER HEAVY and doesn’t fit inside a clutch. 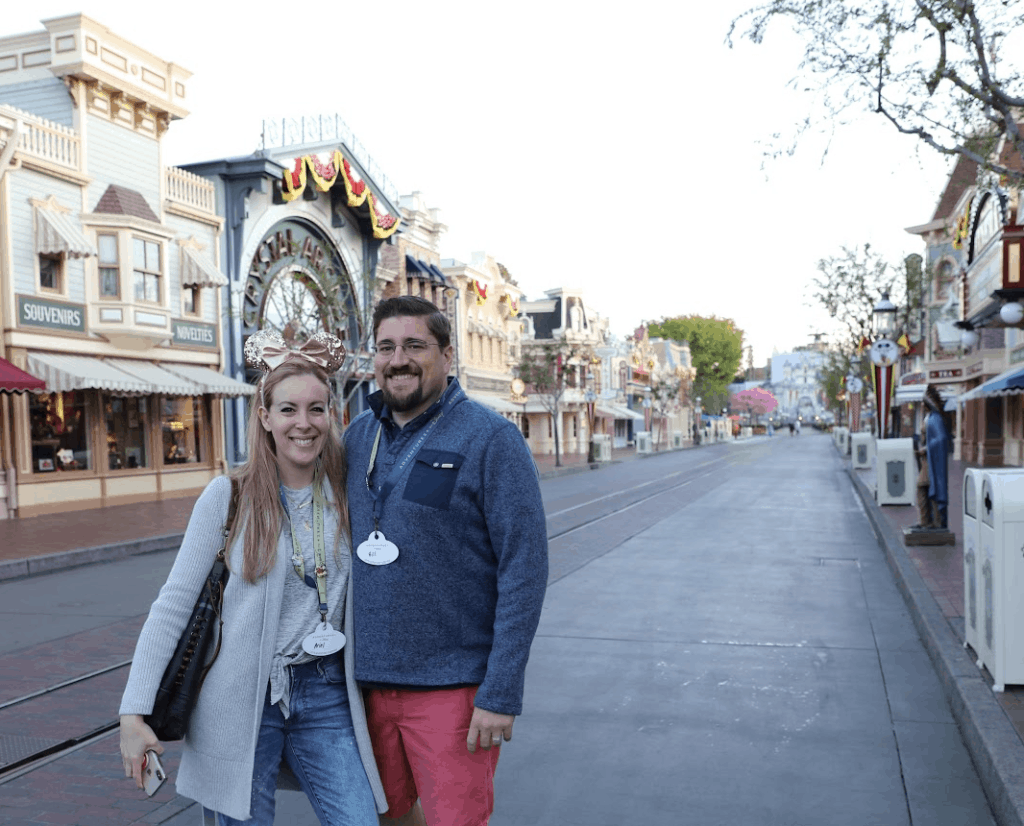 Another important part of this Adventures by Disney review that I have to note is the fact that we were able to get into places before they even opened! Like Disneyland!

Imagine being able to walk down Main Street and take all the pictures you want before anyone else gets to step foot in the gates. Pretty special. And yes, I mean even before the hotel guests as well. You are totally treated like a VIP.

But it doesn’t stop there.

Related: Disney VIP Tours: What You Need To Know

We even had the chance to enter Walt Disney’s private apartment in Disneyland – which is above the fire station on Main Street if you ever want to look for it. Can I be honest with you? I cried in there!

The stories they told us about Walt and his family, about the way he looked out on Main Street, about the dreams he had… OH MY GAWD. THE TEARS!!!

This was a REALLY SPECIAL MOMENT within the tour. The Adventures by Disney Southern California Escape was absolutely incredible. This was a highlight for me. Truly. 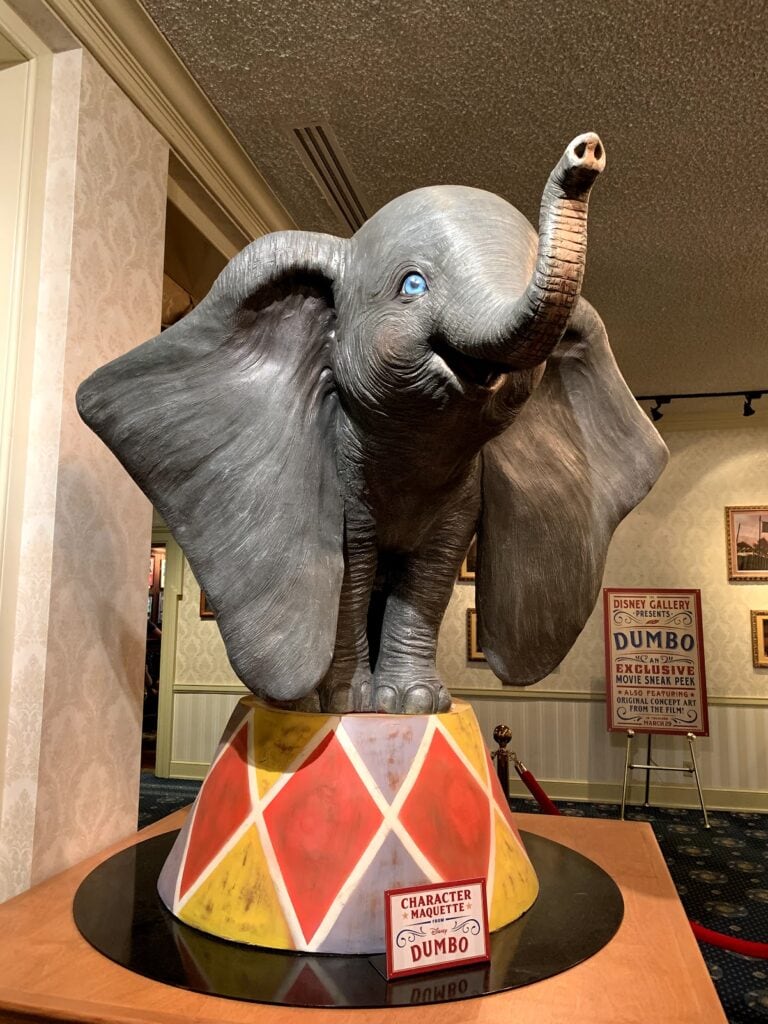 People, half of the tour… I couldn’t even RECORD. So, what you think you know you do NOT KNOW. My Adventures by Disney review is sort of incomplete because I can’t show you how cool it was to go behind the scenes of a few rides and see how they operate or to literally watch Soarin’ from behind the screen.

That’s right – I was behind the screen in Soarin’ and I watched the movie in reverse and watched all the guests pop up and down as they made their way around the world. I touched the screen as they zoomed through each continent and was surrounded by fireworks once the ending scene of Disneyland exploded.

I will never forget that moment either! Talk about Disney magic. Did you know that screen was circular? Round? It always looked like a regular movie screen to me. But I held it as if I was holding a ball! 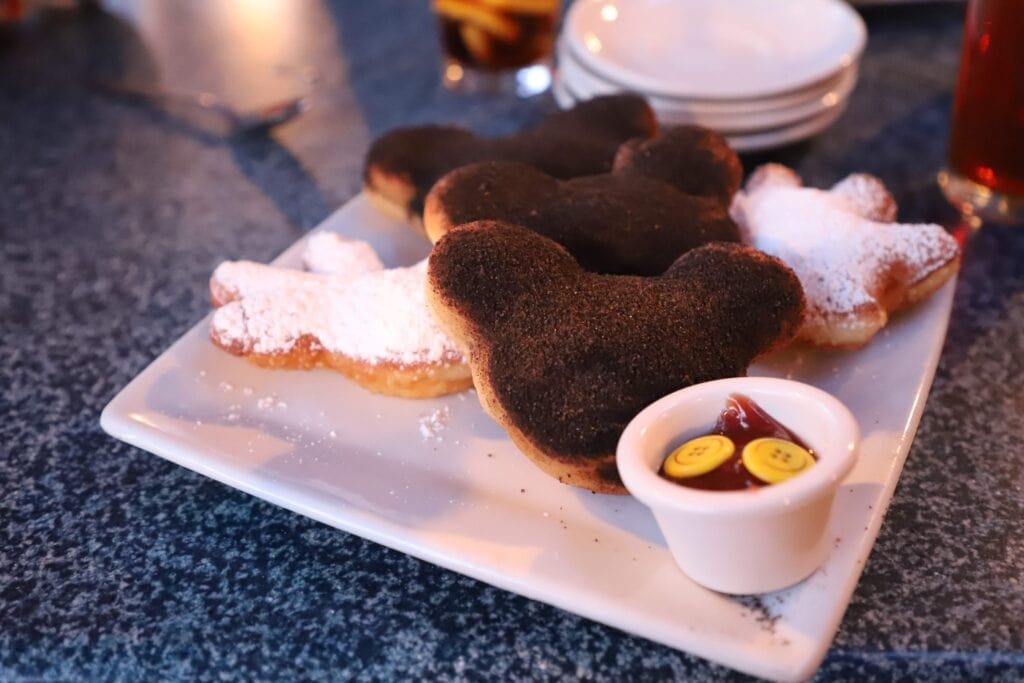 I even saw models of things that are currently being created for the Asian parks. The Zootopia land. I virtually rode through a Shanghai ride – which was EPIC by the way. I can tell you a million other things, but I want to leave some notes a surprise.

What I’m trying to say is that our days were packed with Adventure. 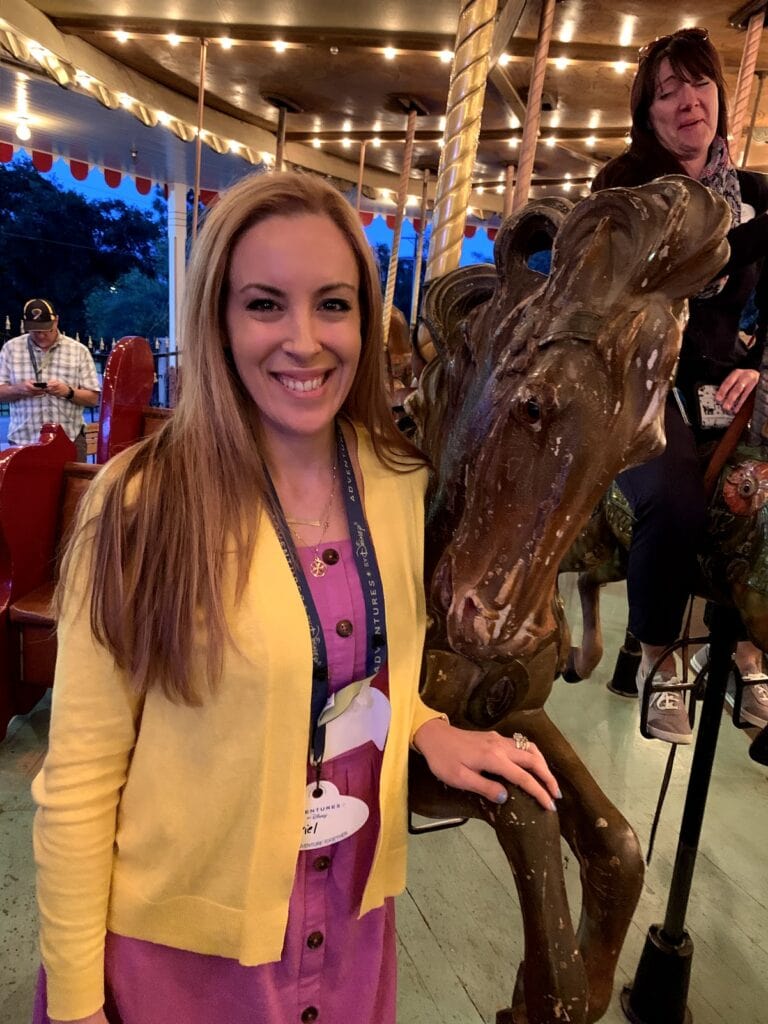 I’m not even going to lie. I didn’t ride the Griffith Park Merry Go Round because I have vertigo. I could barely watch the thing go around in a circle. Actually, I don’t think I did. I am pretty sure I closed my eyes and just blacked out until this part of the tour was over.

But you know what? Everyone else really enjoyed their time down memory lane – my husband included! And I absolutely adored listened to the current owner talk about how he came to take ownership, how much he loves being a part of history, and how he is such a part of the lives of children everywhere.

Did I mention that we got to ride it at night after hours? Not many people can say they’ve done that in their lifetime and WE DID which was pretty sweet. Again – a total perk of being part of the Adventures by Disney crew. 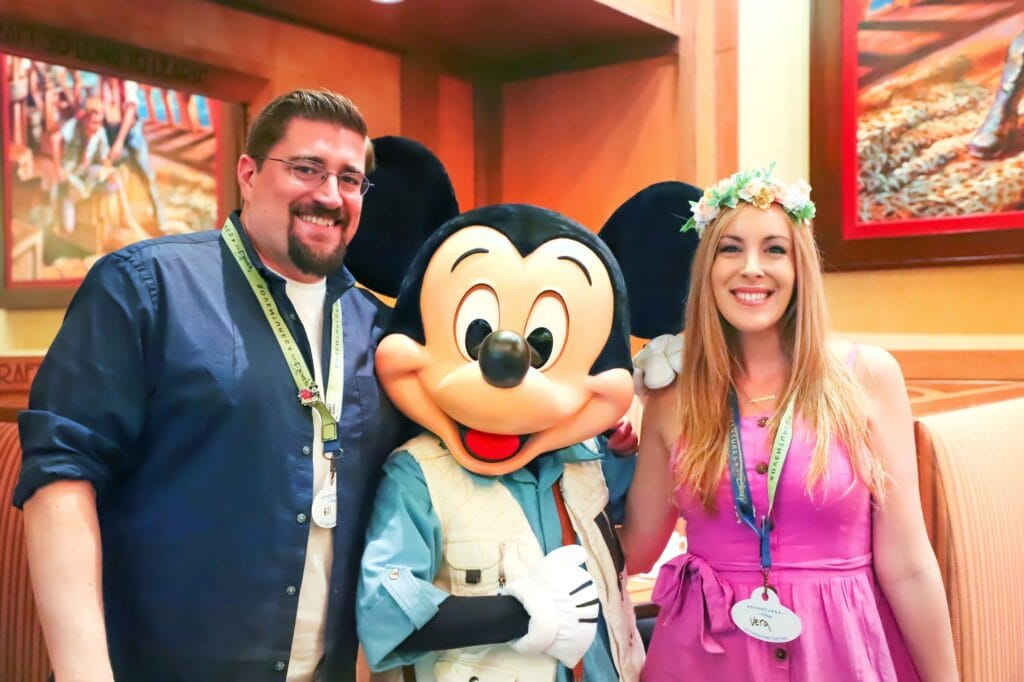 Here’s what I have to say. Yes. The answer is yes. Here’s a link to the tour I did in case you want to check it out. For all other tours, visit the main page for a look at the bigger picture.

If you are looking for that Disney service and quality, you’ve found it. Now, you can take it anywhere you want – all across the globe.

Where do you want to go? Egypt? Japan? Parts of Europe? The US? They are everywhere! The choice is yours. And every year, the team continues to expand their offerings.

So, stay tuned if you have a country in mind that is currently not on the list. I am sure Disney has their eye on the prize. 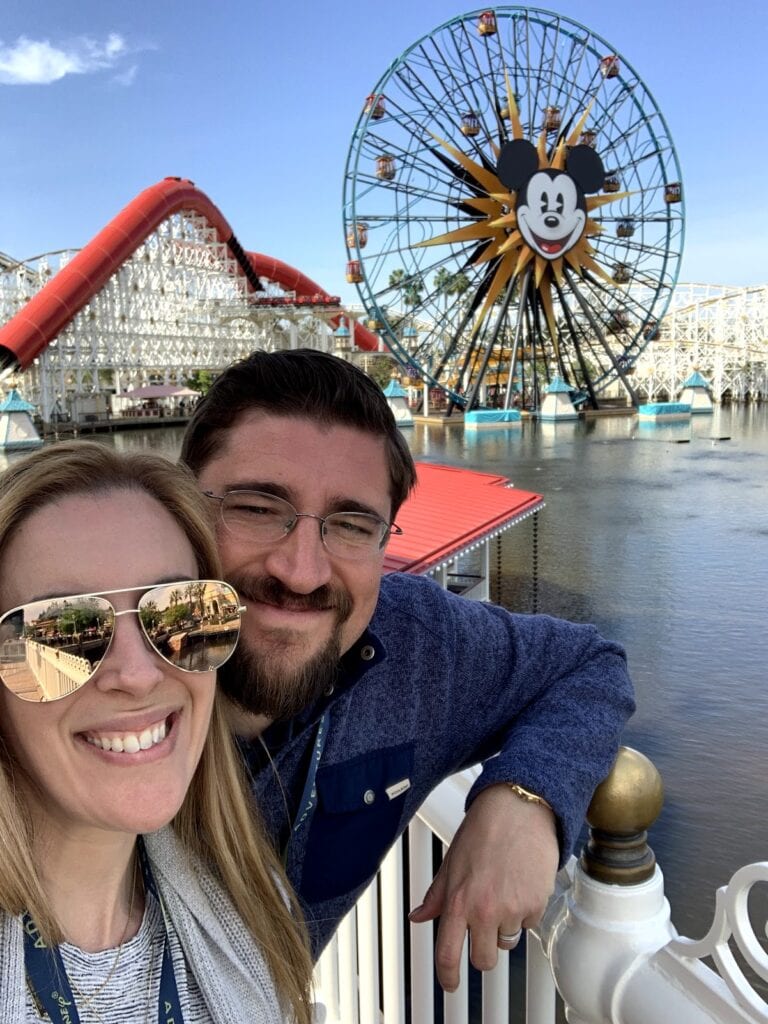 Bill and I took this tour alone, but I would love nothing more than to take my children on an adventure. The Southern Californian adventure was unbelievable and if you are a true Disney fan, then you will absolutely ADORE this trip. So many behind the scenes and exclusive looks! IIt will all make your head spin!

If there is anyone in your life that really LOVES Disney – this is the ultimate gift. I am telling you. You cannot beat it.

I forgot to mention! While you spend your days at the parks, they give you a few fast passes to enjoy. So, you don’t have to worry about planning ahead. We loved those extra little perks. There were also little perks being handed out every single day. It made the trip that much more fantastic. So, just when you think they couldn’t give you any more excitement, they surprise you with MORE! 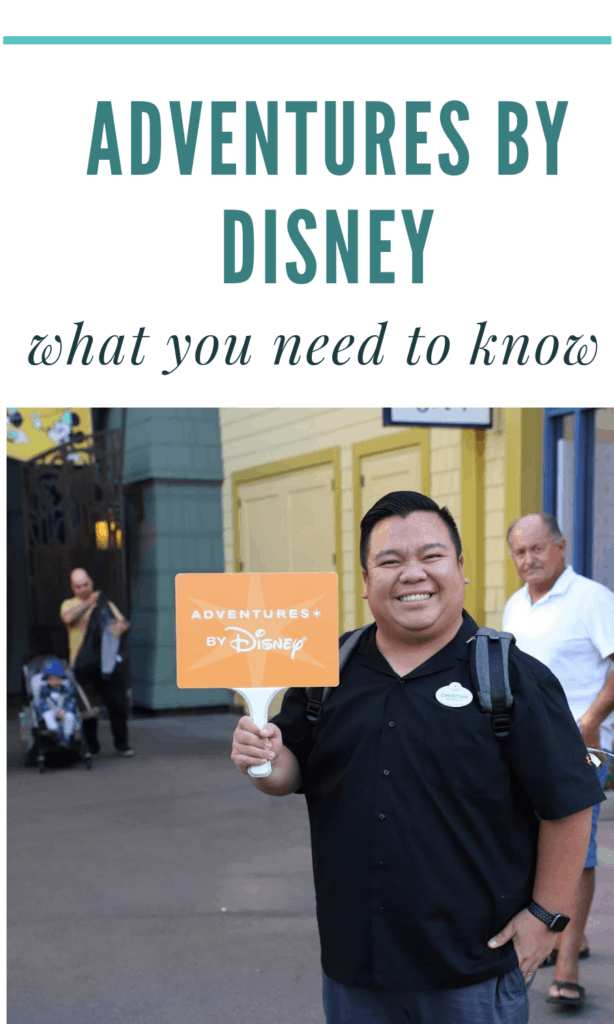