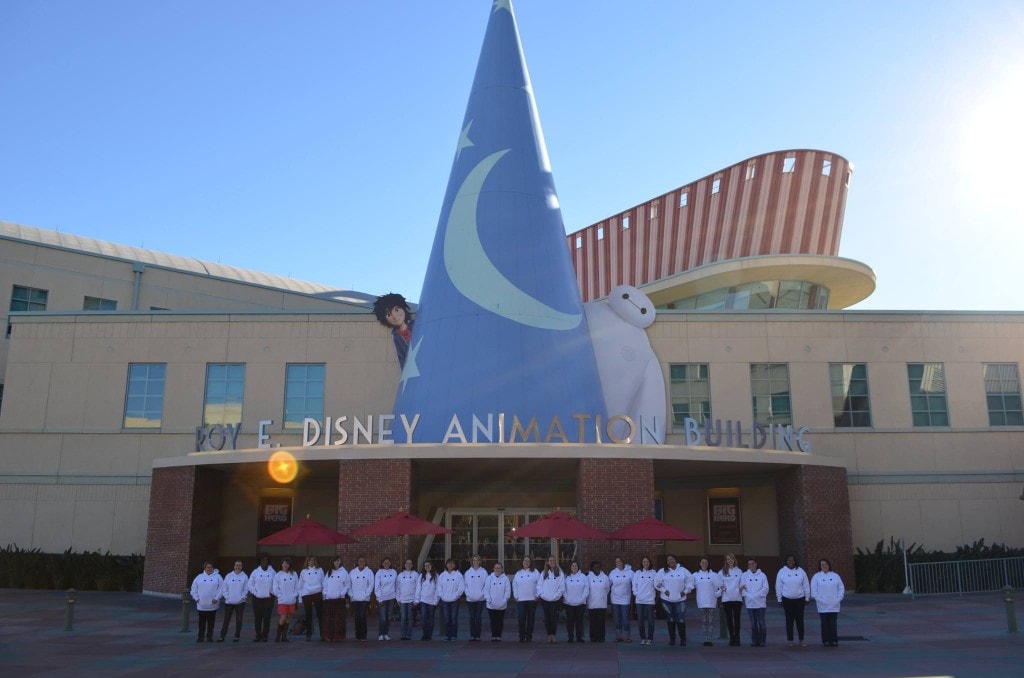 I had SUCH a great time during the Big Hero 6 Press day. Not only did I get to interview directors Don Hall and Chris Williams but I actually sat down with a Disney Animator who offered up a private Baymax drawing lesson. WHAT?

When Disney says they are going to give you a behind the scenes look at Big Hero 6… they aren’t kidding! 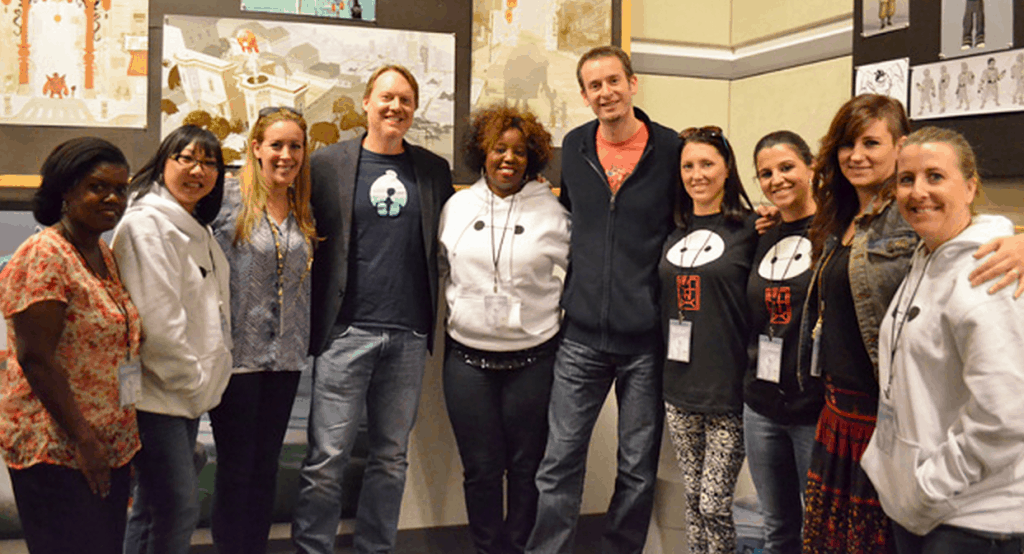 I just want to point out before I get into the actual MEAT of the interview, that I pretty much secured my spot on the Big Hero 6 (the sequel) creative thinking team. I offered up a Baymax enhancement to both Don and Chris that I thought would have played out nicely on film and I don’t know… I think I heard a job offer somewhere in between the laughs and the funny one liners.

Call me crazy! (ok maybe I’m a little bit crazy — but can you IMAGINE?) A girl can dream, right? Sigh. 🙂 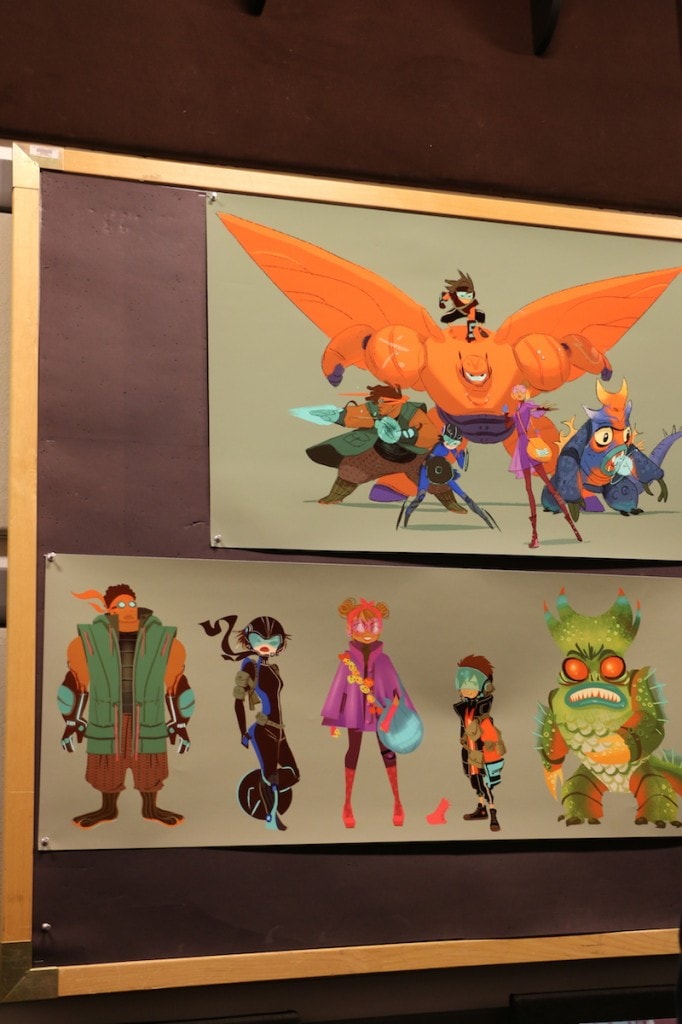 Maybe the job offer didn’t actually happen, but the room I was sitting in is where all the magic happens. The LARGE table housed all the creative minds that put together Big Hero 6. Look around the room (scroll down to the end of the post to view my pictures) and you will see concept art that helped inspire and push forward the storyline.

Before the interview officially began, I had to TAKE THAT ALL IN. All our favorite movies start in a room just like the one we were in for the interview (or in this case – the EXACT ROOM). Pretty sweet.

Onto the interview. I always am curious how directors get attached to films. What is the SPARK that makes them say, “ok, I’ll take a peek at that”. Well for Don Hall it began with the title of the film.

What originally attracted me to Big Hero 6 was just the title. It just sounded interesting. Then I researched it a little bit more. I saw the Japanese superhero theme and thought that was super cool. And  well, then I read the books and you know… I was really struck by the characters.

They were just so fun. They were fun and appealing characters. They had goofy names, like Honey Lemon. And you could tell that the creators loved Japanese pop culture, and that’s why they did the book. They wanted to take their sort of love and anime, and all things Japanese and infuse that with a sort of Marvel superhero story. So, I love that. But most of all, we could see amidst all of that that there was an emotional story at the base. 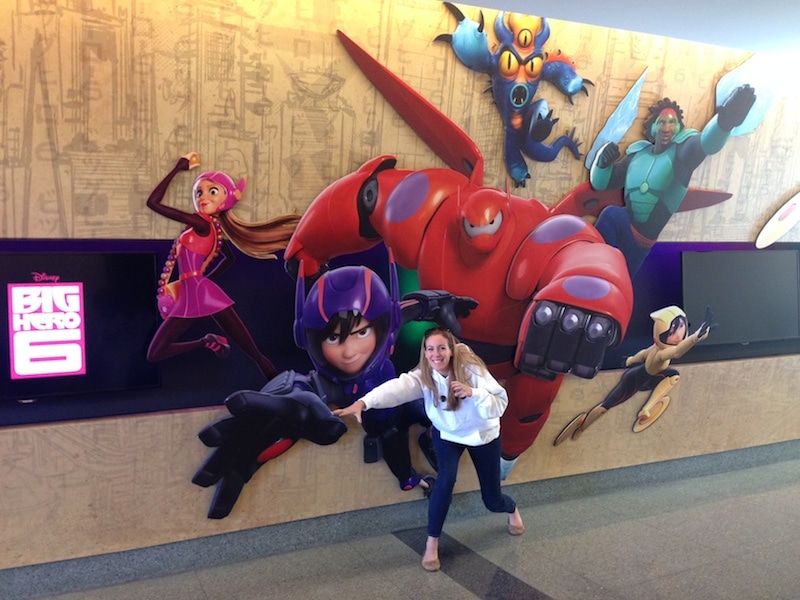 Related: How To Draw A Baymax Sketch

Simple enough right? Strong title. Great characters and an awesome theme. Perfect formula if you ask me!! And no – I couldn’t help getting a little campy while walking around the Disney building. I mean, can you imaging passing huge movie posters like THIS in the lobby every time you go to work. I would NEVER BE ON TIME. #selfiealert

So when does Jon Lassiter actual green light a Disney Project? How buttoned up does it have to be before the big man sees the request? And how true to the original pitch does the movie have to remain?? ANOTHER INTERESTING SET OF QUESTIONS RIGHT? I’ve always wanted to know this!!

In the beginning, you’re not looking every character, every scene. It doesn’t have to be worked out. You just have to show the potential for a fun story. Everyone was really taken with the idea of a kid who was going to lose his brother and who would be left with his brother’s robot, a surrogate big brother, to help him move on. That just struck a chord with the team. I was really glad when John Lassiter green-lit it, and in a way, the fact that it was an obscure property really helps us, because the way we make movies here is, we’ll sit at this table and talk about it for years.

It evolves quite a bit, and we have screening after screening, and the story changes a lot. So, we know that whatever we start out with, it’s going to end up being something different. It did evolve a lot with the way we work around here, but I met the men who created them. Duncan Rouleau and Steven Seagle came to the premiere last night. It was actually pretty cool, talking to them last night because they really love the movie, and I felt like, well, okay, if the creators of the original comic book love this movie, then hopefully I think we did something right by them. It was great. 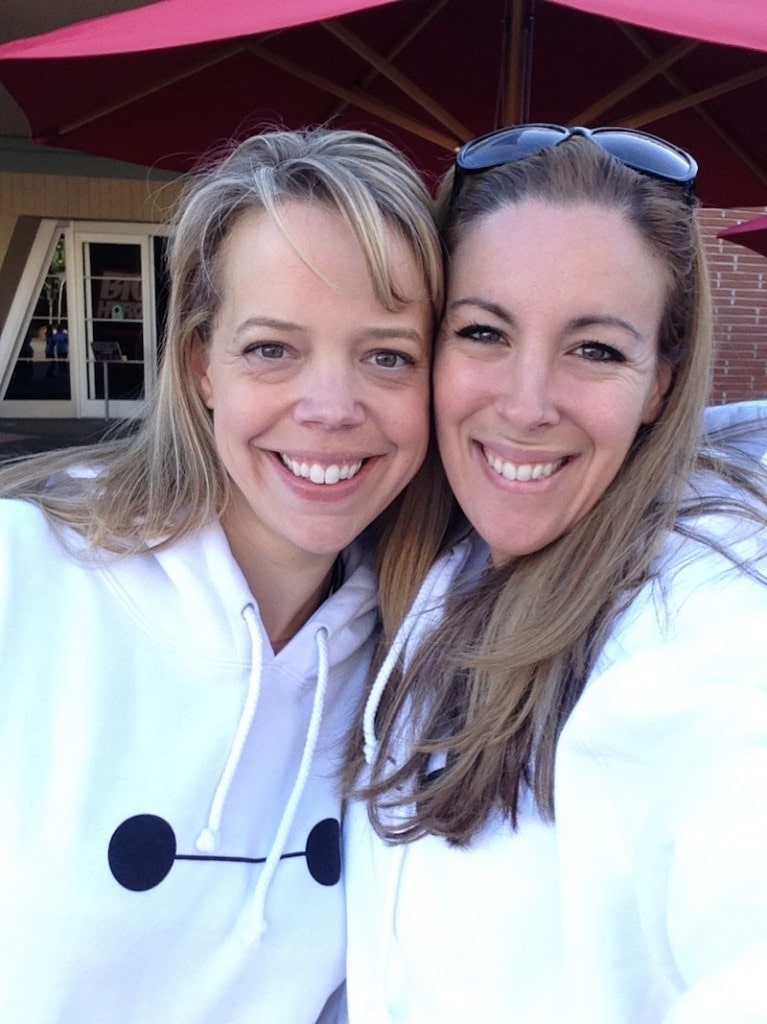 Throughout the film, many changes were made – OF COURSE. Which change had the biggest impact?

Originally, Hiro was really driving the story which makes sense. You’d want the protagonist driving the story. But the story wasn’t coming together, and it didn’t come together, until we put Baymax front and center, and really took that idea that he wants to heal him and put it in the forefront. We made Baymax proactive as opposed to being reactive. Because, before, he was really reactive to Hiro and he just followed Hiro around. He was always a great character, but when you’d put him front and center and make him proactive, he’s the one engaging a lot.

When we added that scene it really solidified the relationship and we understood then how much they were invested. How much they loved each other. We became invested in their relationship, and that was a fairly late addition. I think a credit to the way that we make movies here, where we allow ourselves to constantly reassess. So, I was really proud of that scene.

I want you to look out for this moment – the moment when Baymax and Hiro are flying together and Hiro catches their reflection off the side of a building. It was one of the few times I teared up during the film. Really happy that they decided to solidify this relationship with this added scene because it nailed it for me quite frankly.

What about Chris Williams — who is his favorite character in the film BESIDES Baymax?

I identify a lot with Fred. He’s really a dork and a geek and into monster movies and sci-fi. I mean, I don’t have the collection that Fred does and I don’t have the resources at all. But I can identify with Fred. There’s moments for Fred, during the superhero shenanigans part of it, I keep remembering the feeling that I had when I was a kid and we played superhero, and I had the trash can lid for a Captain America shield.

And we would throw that, you know? There was a feeling, and that’s how I feel like Fred approaches this whole thing. Like the stakes of it don’t really sink in. For him, it’s just, “I get to play superhero as an adult.”

You’re in a building full of Freds here.

Best line ever in an interview!! I LOVE IT!!

Let’s talk about the technology in the film. It’s super futuristic… or is it? How much was researched by actual scientist and how much was the brain child of creative Freds? Chris says it was a little of both.

If you watch the credits, you’ll see, you know, “Thank you, science.” So many people were brought in for extensive research purposes. There were scores of roboticists that consulted on the movie, and that gave us Baymax. And then there’s Dr. Tom Wagner, who was from I, Robot. He became a consultant on the film early on.

We were able to run not just the robot stuff but technology ideas through him as well — like plasma blades. We want Wasabi to have plasma blades. Can that happen? You know. And he’s like, “Well, yes, if you do this, and you did that,” and some of it, we’d use, and some of it was pulled back just for design reasons. But everything in the movie is researched and grounded. We tried to keep it as real as possible. Even telekinesis, which we thought we was really bending the rules, you know, we come to find out that, well, people are actually working on that.

Makes me love the movie even more!! 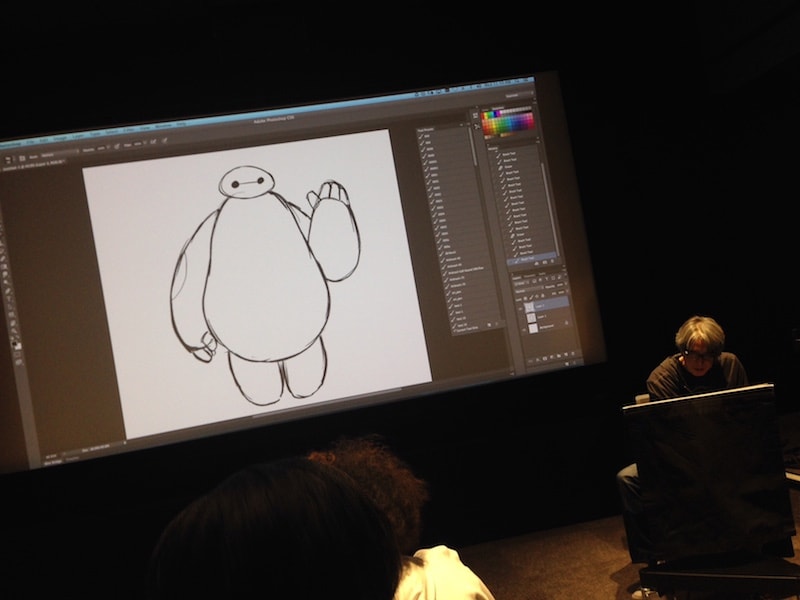 Onto the second half of the day which was an animation lesson from Jin Kim. As you can IMAGINE, Jin has been drawing his entire life. Since coming aboard Disney, he’s worked on films such as Tarzan, Hercules, Big Hero 6, Frozen, Wreck It Ralph, Tangled and Bolt. You know, just a FEW.

We asked Jin how long it takes to perfect a character and he said it usually takes “around a year”. The “design might be done and the director gave final approval, but now it has to go to CGI” which leads to a longer process.

One of Jin’s favorite animated moments of Big Hero 6 was right in the beginning of the movie – when Tadashi dies. The scene where Hiro is on the school steps – that brought the most emotion up for him. He loved the way that turned out. I can’t say his other favorite parts because I feel like I would be ruining the movie for you!

“People. A few months ago, I took a lot of street photos and I look at those occasionally to find interesting people. I doodle photos from those shots.”

Any advice for people looking to become animators?

Keep observing. Keep drawing. There is no other way. See life for what it is. Seeing other people’s art work isn’t necessarily helpful. Watching life and drawing it is the best option. 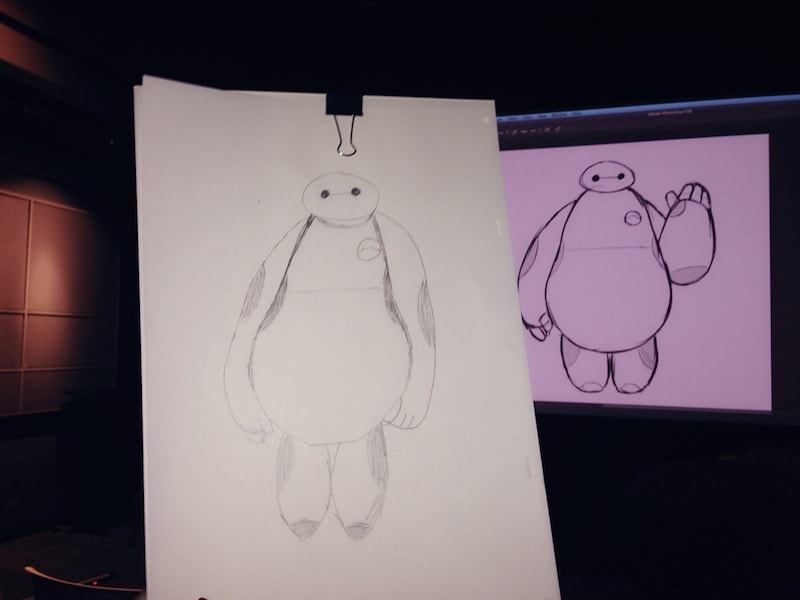 And then… it was time for me to draw Baymax. Listen… I think I did a pretty darn good job. No judgements here please. I put my best foot… I mean PENCIL forward. LOL I took this picture home to my kids and I swear they thought I was Disney himself.

Be sure to check out Big Hero 6 TODAY!! It’s in theatres and it is ROCKING!! 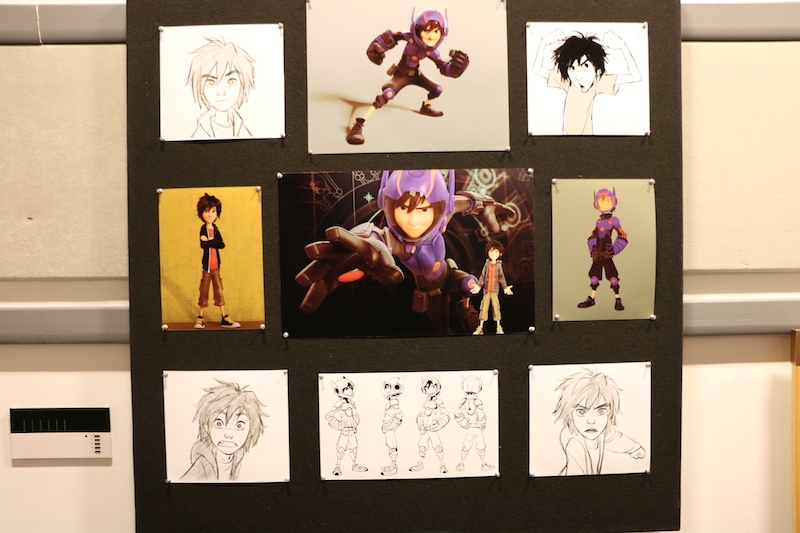 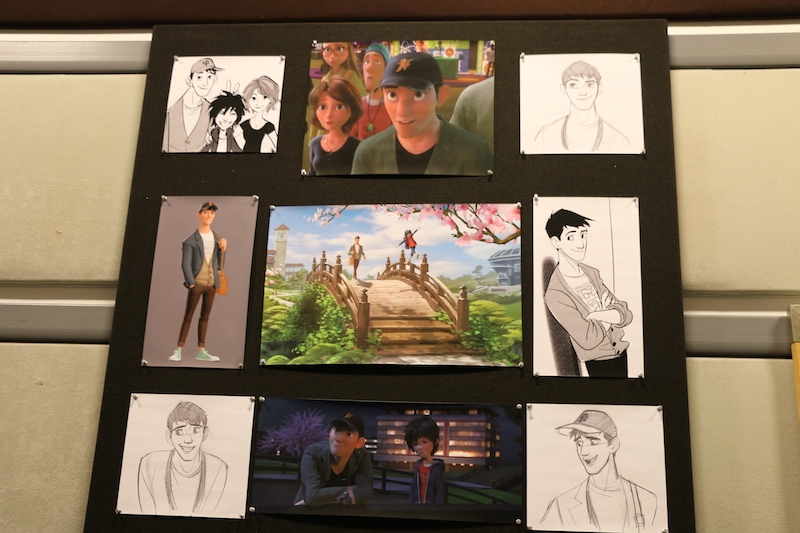 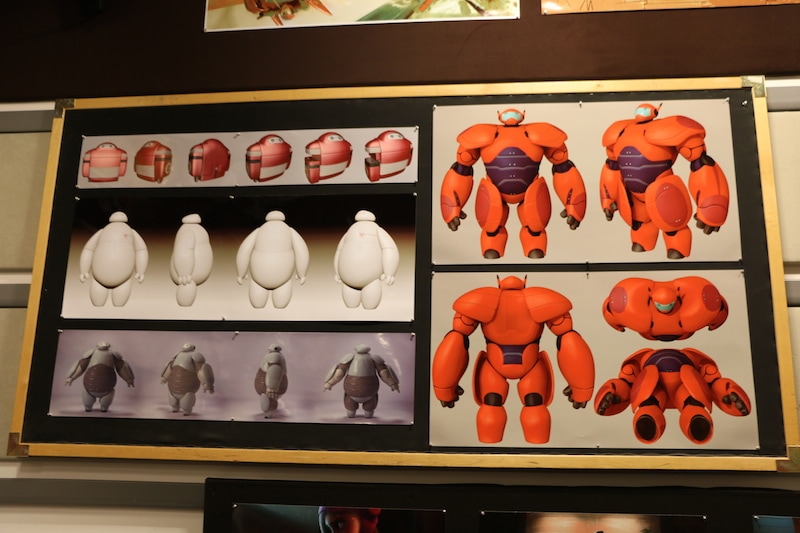 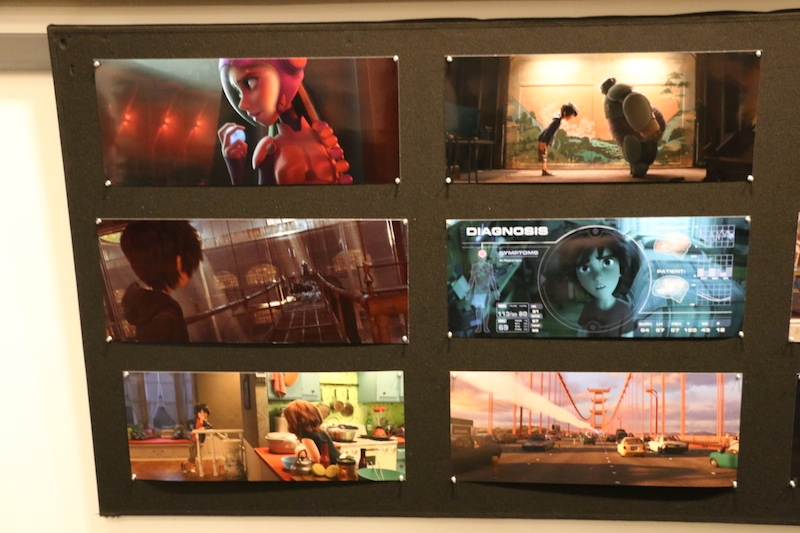 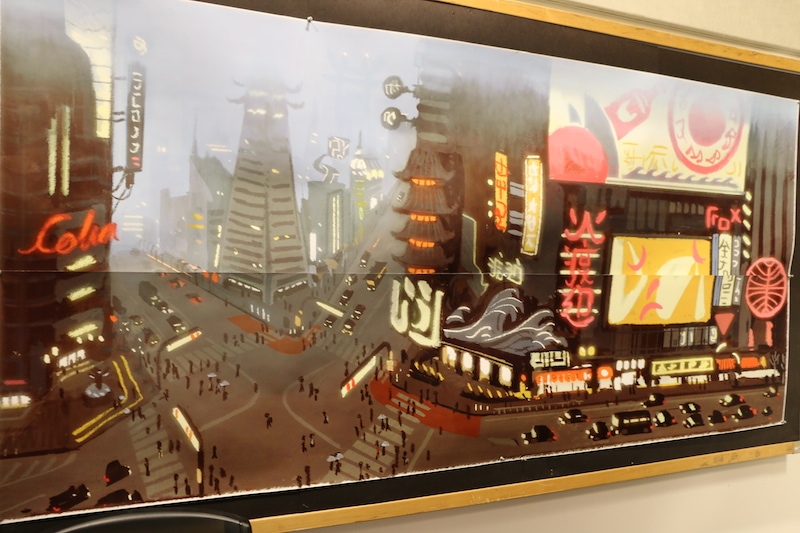 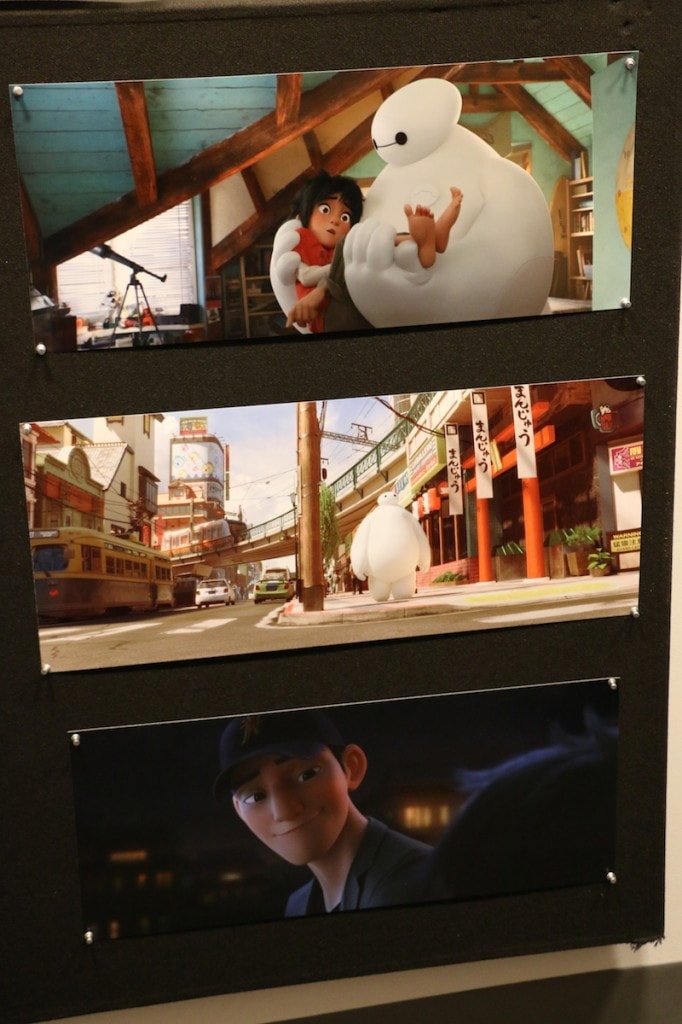 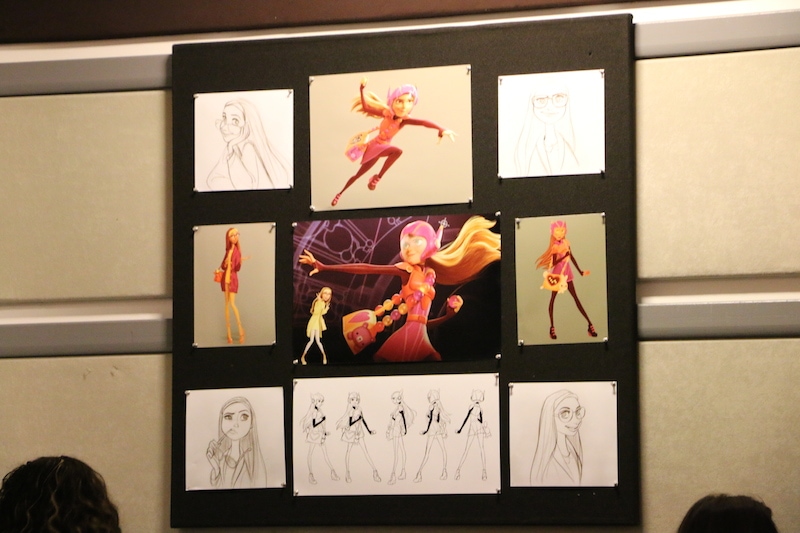 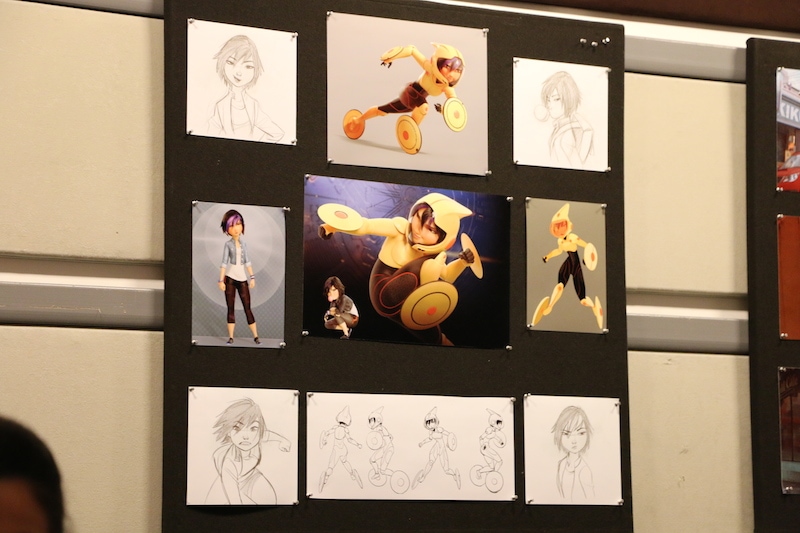 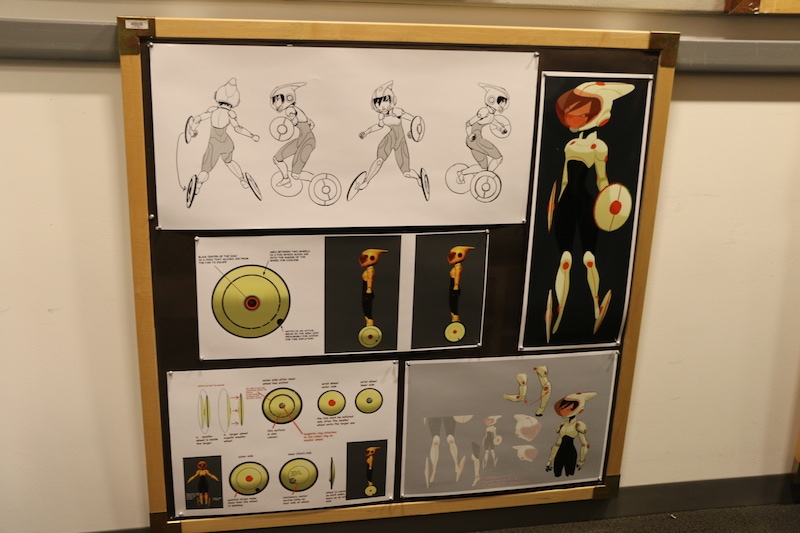 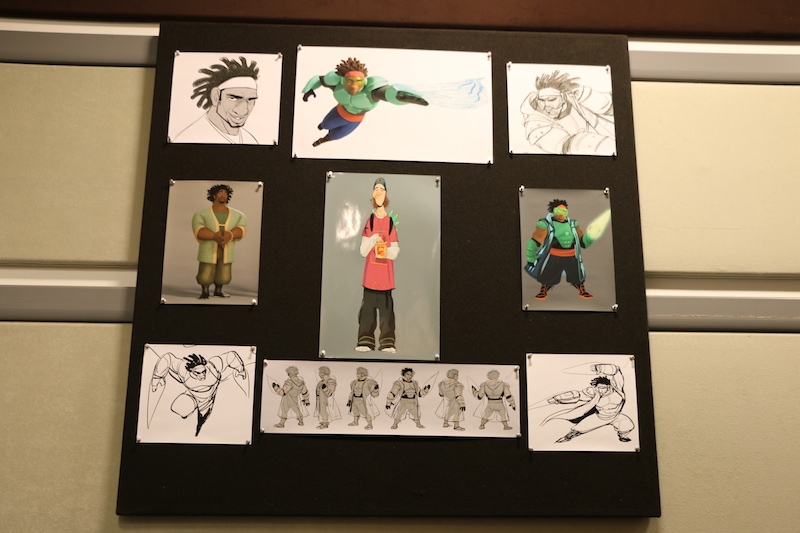 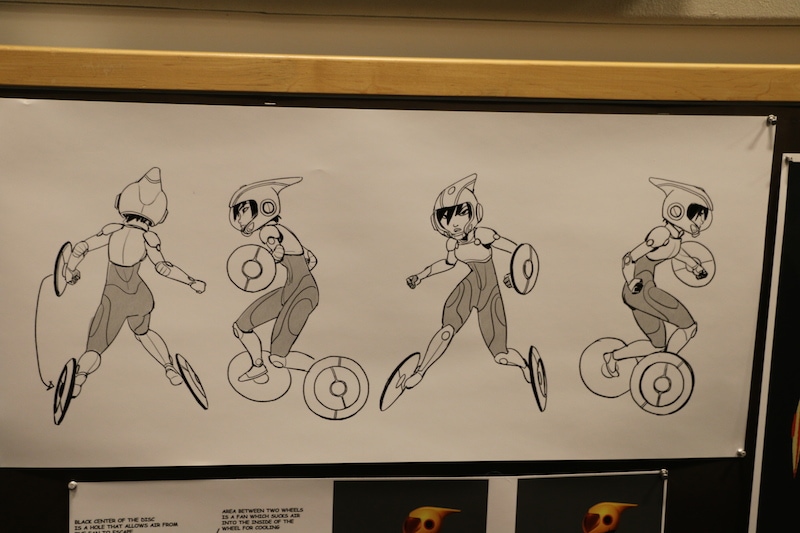 * Disney flew me out to LA to attend the Big Hero 6 premiere. All opinions are my own.

I love seeing all the pictures of the animation in process.

I have long been fascinated by animators - there is such an incredible level of talent buried in their heads, hearts and hands.... I love that you had the opportunity to sit down and learn. Such a gift! Talking to an animator is on my life list. It was so much fun to follow along online as you experienced all this.

This looks AMAZING. Can't wait to take my kids to see it.

What a cool experience! We saw Big Hero 6 yesterday and loved it!