I had the chance to screen ABC’s new romantic comedy, Splitting Up Together, and want to officially put it on your radar. I had such a great time interviewing the Splitting Up Together cast because they felt like one big family. What a great chemistry they have – on and off the screen! 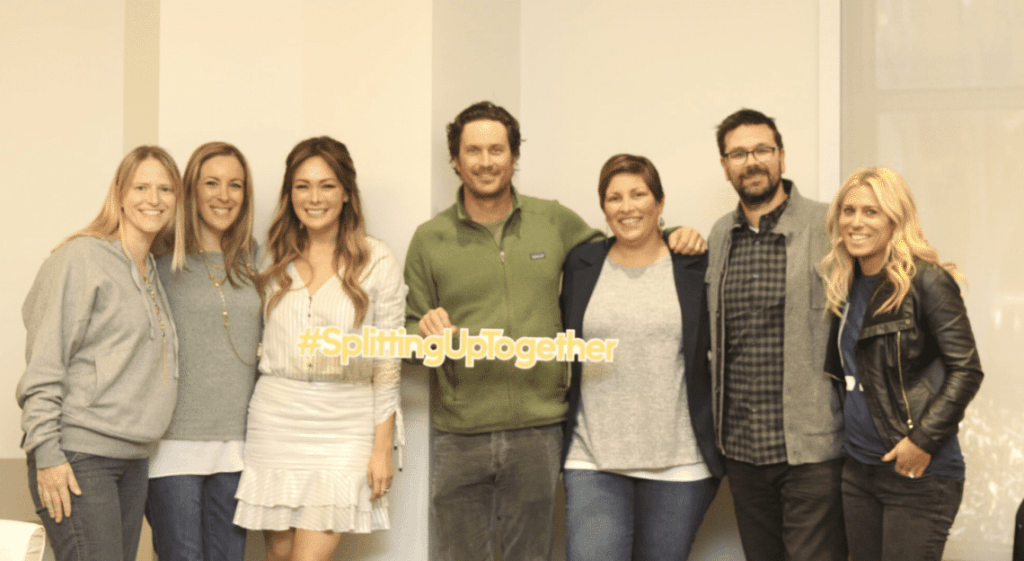 Not only will this show pull at your heartstrings, but it will make you laugh and cry as well. It’s like a buffet of emotions. An all you can eat for fictitious relationships and I can’t wait for seconds.

Honestly, every character worked. The family unit felt familiar and at the end of each episode… I was rooting for them all. Each member of the Splitting Up Together cast brings something new to this show – it truly just works.

You could tell right off the bat that everyone at the table loved what they did and had an absolute passion for this title. It was such a great thing to see. So much love for their characters and for the storyline. I always love these intimate peeks behind the stage curtain.

Before you tune in and watch the premiere, I wanted to tell you five facts about Splitting Up Together cast so you could look out for them while watching each episode. Ready to get started?

Emily wanted to put out a show that portrayed divorce in a more positive light.

We drew from all of our own real-life experiences. We’re all married with kids. Everyone here is. So, we had lots of stories to share. I think the main goal is just to tell a story about divorce that isn’t toxic and negative and that has a little bit of hope and a little bit of optimism.

Having grown up with parents who are divorced… I think everyone always hopes, “oh, my gosh is there any chance in the world that they can get it back on track?” And I think a lot of kids feel that way. To create a show where there is that sort of glimmer that’s being dangled between the main characters was a new way of telling a divorce story for us. 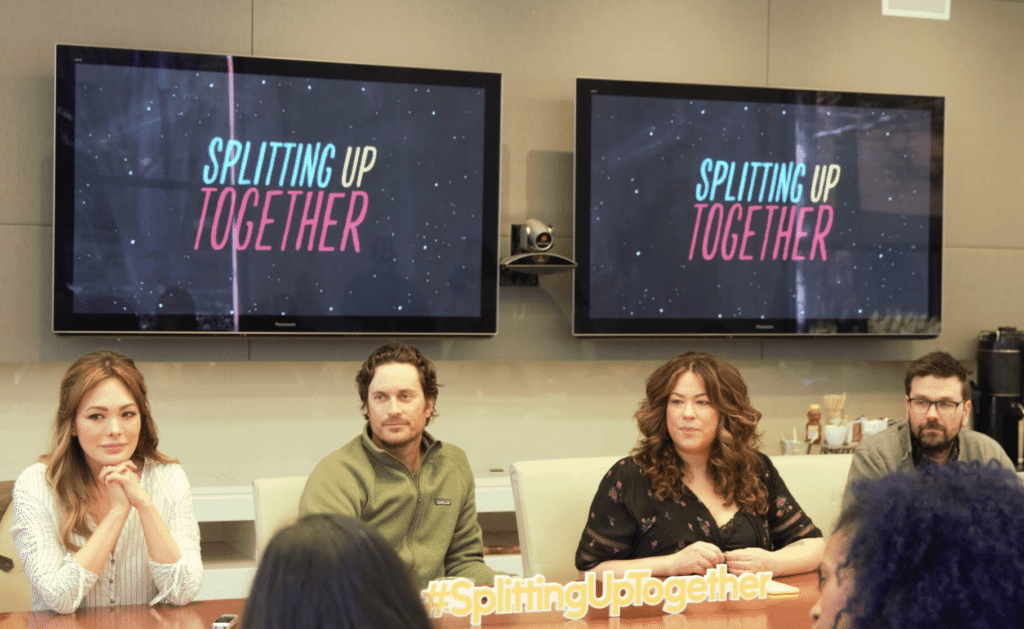 Oliver plays a dad of three and is also a dad of three in real life. Emily says watching him on set feels so natural. I think this is so important when it comes to casting because there are just some things you cannot fake.

There is a particular scene where Oliver is messing around with the kids and the camera pans out and away from a window. I didn’t know much about him and don’t really follow his personal life, but in that instance… I knew he was a father.

In my core. Because he was a dad. Not a TV dad… but a dad. And I saw it as clear as day in 20 seconds worth of film. So, I absolutely understand Emily’s quote here.

One of the things that is so great about Oliver in the show is that Oliver has three kids in his real life. And watching him deal with these kids, it’s so authentic. You can tell he is a dad.

You can tell by how he deals with these kids. Sometimes he says stuff that’s really harsh to the kids. You know, there’s a couple episodes in where he gives it to them pretty bluntly, and it just feels really authentic. So, we love that. 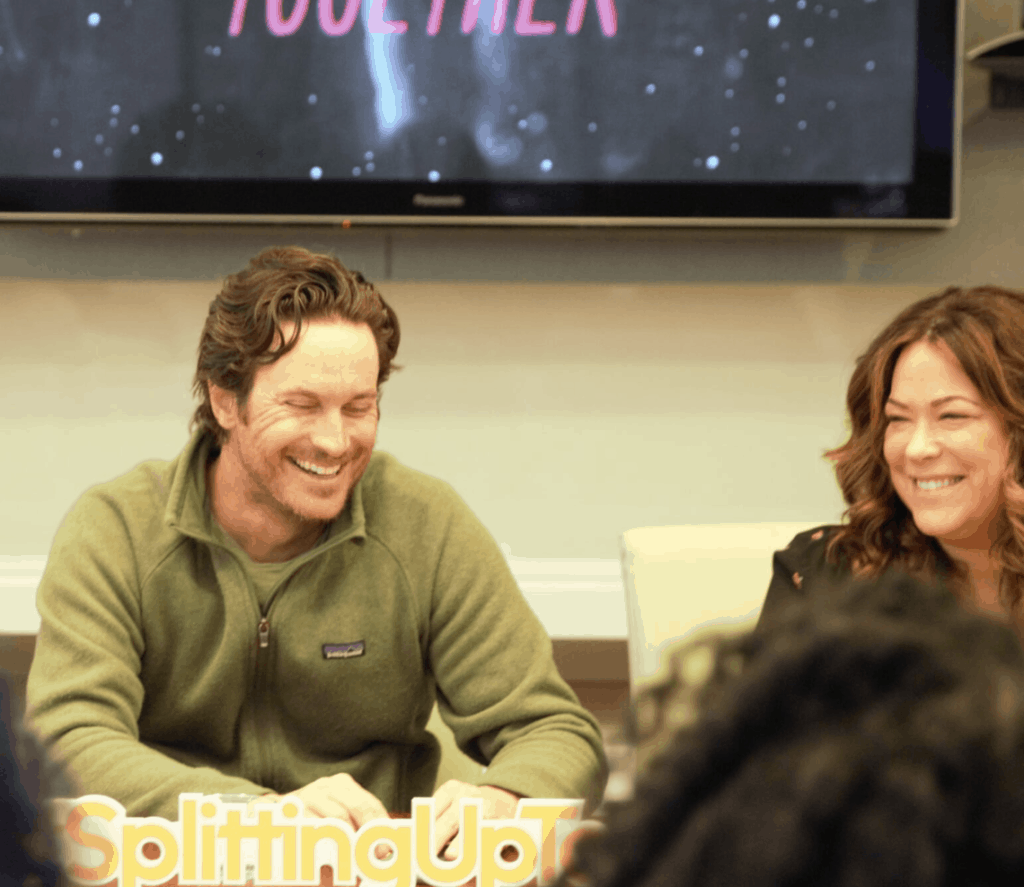 This is, for me, the most connected that I’ve been to a project just because I live this life. When I read for Emily, she was sitting way back and I said, “I want this job so bad.

I need to have this job because I live this. This is my life. I know how to do this. You know what I mean?” And she listened to me.

That she did! And thank goodness for that because Oliver is the perfect Martin. Truly! I absolutely loved watching him in this role. He is such a GREAT ADDITION to the Splitting Up Together cast!! I LOVE HIM. 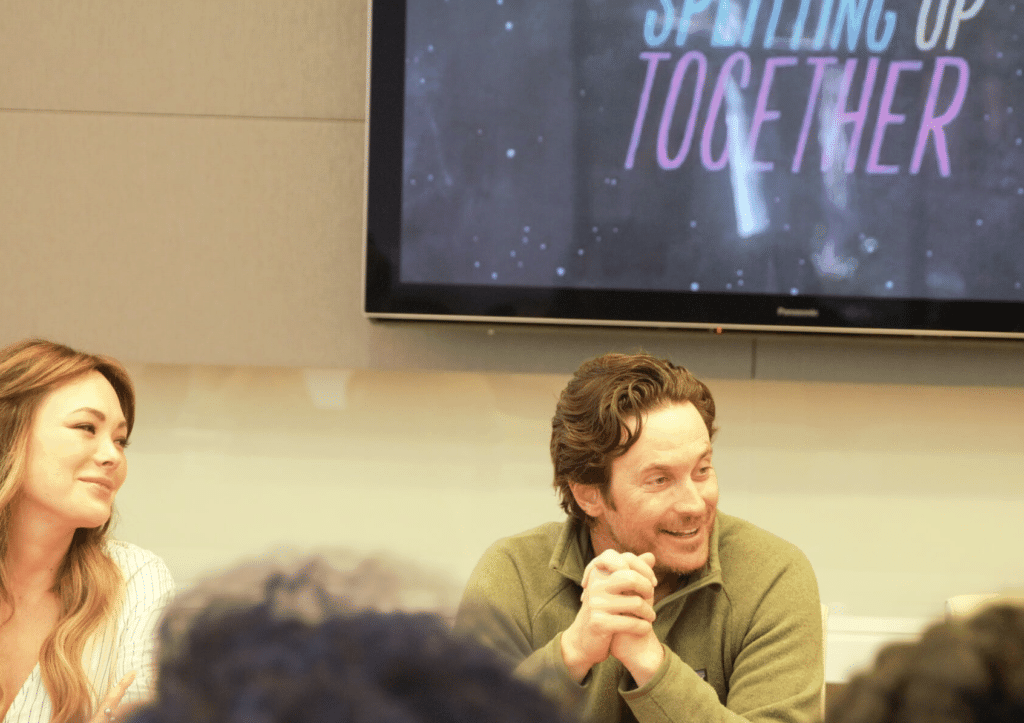 Camille and Arthur from the Splitting Up Together cast truly steal the show whenever they are in a scene. They don’t get that much screen time during season one but that doesn’t mean that you won’t fall in love with their relationship.

Every single time Arthur came on, I laughed out loud… and I’m not LIKE THAT! I’m sort of the person who chuckles and thinks, “that was funny” but doesn’t actually LAUGH. Well, Arthur made me laugh.

He has great timing and delivery. We asked about whether or not we would be able to see more of the happy couple and … we got a maybe.

We had little glimpses into their marriage but because we had a short order for the first season — there’s only eight episodes in total — and was very concerned with sort of getting vested and setting up this core dynamic that we wound up losing more than we wanted to of the glance that we took into their lives.

I’m very hopeful that if we get a second season that we’ll get to delve into a more. Their dynamic and their chemistry – it is evident. No matter how much see of them, it’s just so funny. 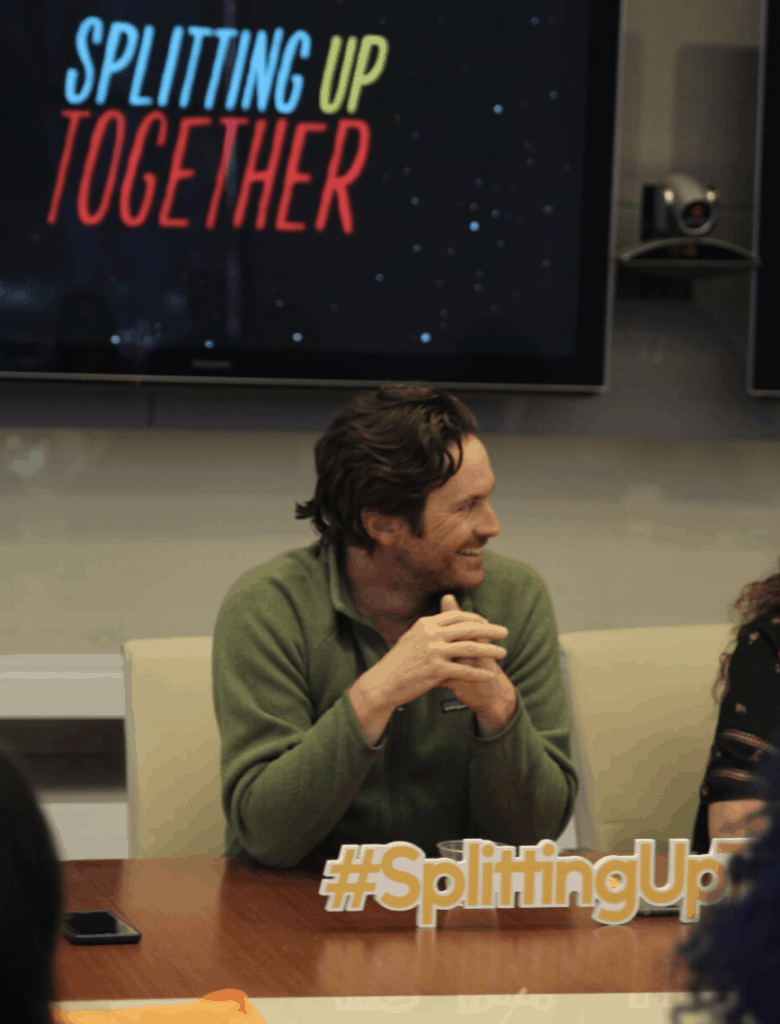 Splitting Up Together is actually created off the foundation from a Danish Show. However, Emily said that while they took certain pieces from the original, it is by no means a direct copy.

We took a lot of the elements that I thought were the most compelling from the original. They had zero storylines about the kids in the Danish format. The kids were very peripheral. They never went to their workplaces.

I love the way they approached it. It was very different. It was very unlike a show you’d see here. It was almost like a stage play, and you just were really focused on Martin and Lena. It showed me that you can tell smaller stories and focus on these two main characters.

The Danish creator based this show on her life. She came up to the writers’ room and everyone was like, “Did you get back together with your husband?” [CHUCKLES] She was like no.

She never intended to play with it as much as I wanted to in our show, and we do. We go in a way that their show doesn’t. We really feel like the chemistry between Martin and Lena is part of what makes you so invested.

Absolutely! I actually struggled a bit with that part of Splitting Up Together because I so immediately became invested in the two and wanted them back together after episode one. I recognize why that have to continue to be apart.

They both need to grow as individuals and find the joys that they lost in one another. However, you can clearly see a foundation of love and I guess I am just a sucker for that sort of thing.

Who do you like best from the Splitting Up Together cast? It’s a hard one, right? Why do we have to pick? 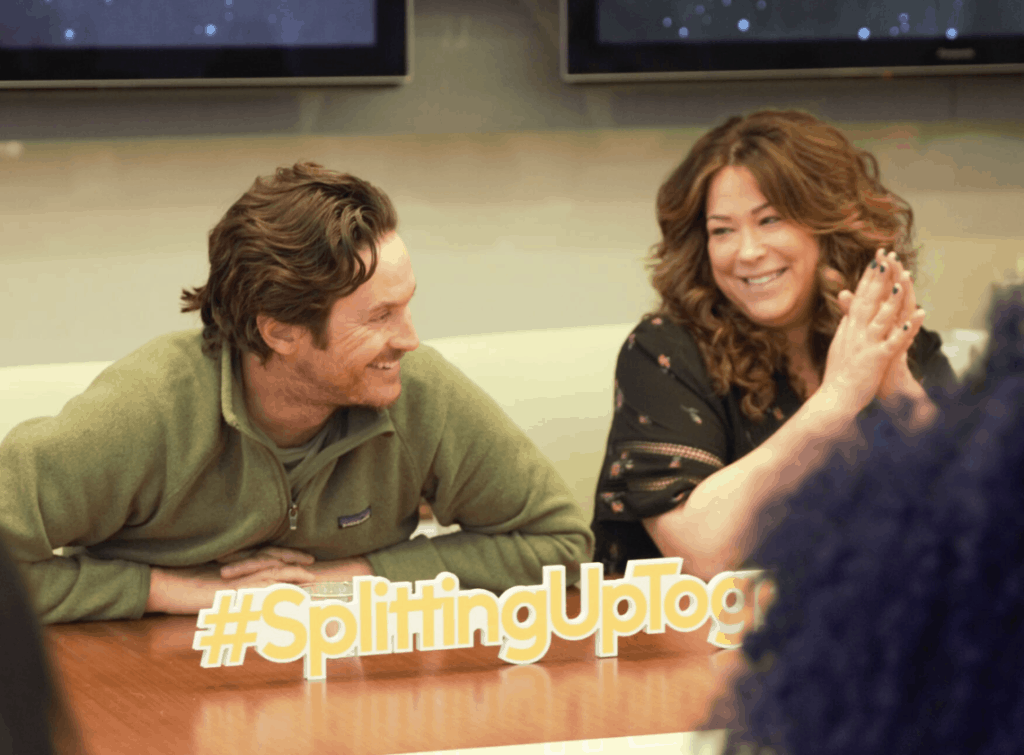 Be sure to tune in TONIGHT at 9:30 EST on ABC! I can’t wait to see what you think about this show!!!

SPLITTING UP TOGETHER (series premiere Tuesday, March 27 at 9:30|8:30c) I’m rooting for the WHOLE Splitting Up Together cast – go and get it!!! 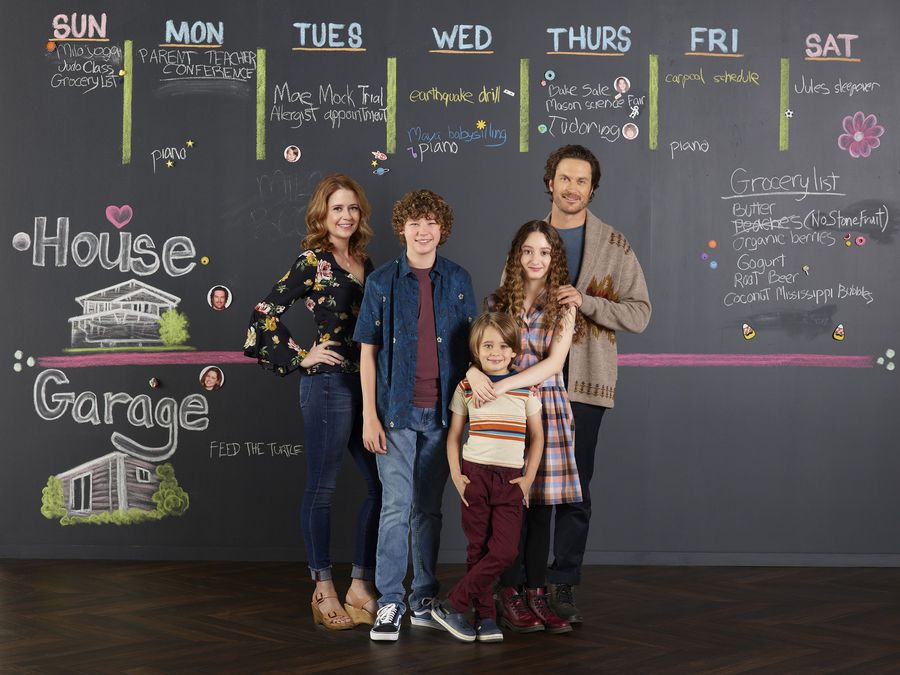 OLIVER HUDSON (“Martin” on “Splitting Up Together”)

LINDSAY PRICE (“Camille” on “Splitting Up Together”)

EMILY KAPNEK (“Splitting Up Together” Creator and Executive Producer)

DEAN HOLLAND (“Splitting Up Together” Executive Producer; he also directed the pilot)