I was able to screen McFarland, USA before the actual trailer released and hear all about the McFarland USA cast thanks to the Disney team from behind the scenes. It was totally amazing!

While I was in LA for ‘Big Hero 6’, the team gave us a little surprise and I was so thankful for it. Everybody was so proud of this movie. You could see it in their eyes as they talked to us a bit about the storyline before rolling the opening scene. But there was a kicker… we weren’t allowed to talk about the McFarland USA cast for quite some time.

“Hey guys! You’re going to screen a new movie with Kevin Costner. But there’s no point tweeting about it right now because we don’t even have a trailer to support. Wait a bit!”

WHAT?! Talk about COOL! Anyway, it’s in theatres now and it’s a great feel-good movie about a group of teens who showed the world what they were about – even when nobody believed in them.

Fun Facts About McFarland, USA And The McFarland USA Cast 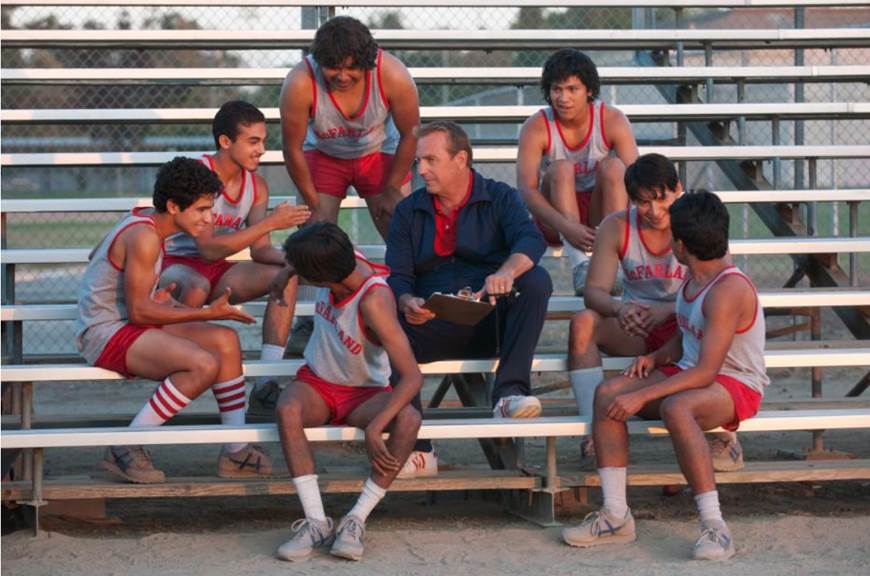 Based on the 1987 true story, “McFarland, USA” follows novice runners from McFarland, an economically challenged town in California, as they give their all to build a cross-country team under the direction of Coach Jim White (Kevin Costner), a newcomer to their predominantly Latino high school, with whom they ultimately bond to build not only a championship cross-country team but an enduring legacy as well.

I cried during McFarland, USA because I ached for the families that are still struggling in similar neighborhoods as the one featured in the film. I cried because the children were all great runners. You want to know why? Because they had lots of practice running back and forth to their morning jobs as pickers.

They would have to run miles to and from school and get heavy labor done – all before their homeroom bell rang. This is a real-life story of struggle. There are no princes or princesses at the end of this fairytale that come to the rescue with a white carriage and a pot of gold.

There are no castles. This is REAL LIFE. I repeat – actual families. The McFarland USA cast represents people who went through this story and I think that’s why it meant so much to me.

My children will never know that struggle.

We all see them now thanks to Disney bringing this wonderful story to the big screen. But just in case you are someone who likes to learn unknown tidbits about a movie, I wanted to provide you with the following FUN FACTS.

“McFarland, USA” is inspired by a 1987 true story, in which an unlikely band of inexperienced, under-equipped, young Latino runners with exceptional determination rise to become cross-country state champions under the leadership of their coach, Jim White. Over the years since then, the McFarland High School cross-country teams have won nine state championships and the small school is considered a powerhouse in the sport.

Coach Jim White is retired now, but if you go to McFarland, chances are you will see him out there on his bike, keeping up with the kids every evening with a lot of his original team running alongside as well. White retired in 2002 after teaching in McFarland schools for 40 years and coaching for 25 years.

A number of the original runners on the championship 1987 cross-country team became educators in the McFarland school district. The former teammates are not only working in their hometown but also raising their families there and actively supporting the cross-country teams of today by coaching, helping out with the meets and practices and donating goods or money so the teams have what they need.

Three out of the seven young McFarland USA cast actors on the team in the movie are from the McFarland area—Sergio Avelar who plays Victor Puentes and Michael Aguero, cast as Damacio Diaz, are actual runners and Ramiro Rodriguez, as Danny Diaz, was a champion soccer player.

Ramiro Rodriguez had no intention of auditioning when he agreed to drive his cousin to the casting tryouts for “McFarland, USA.” He landed the role of Danny Diaz after being pestered repeatedly by executive producer Mario Iscovich to audition.

Sergio Avelar is a bona fide runner and a member of the McFarland Track Club. He has been running since 2001 and considers himself a “decent runner.” One of his coaches in middle school was actually Thomas Valles, the real-life person represented by the role that Carlos Pratts plays. 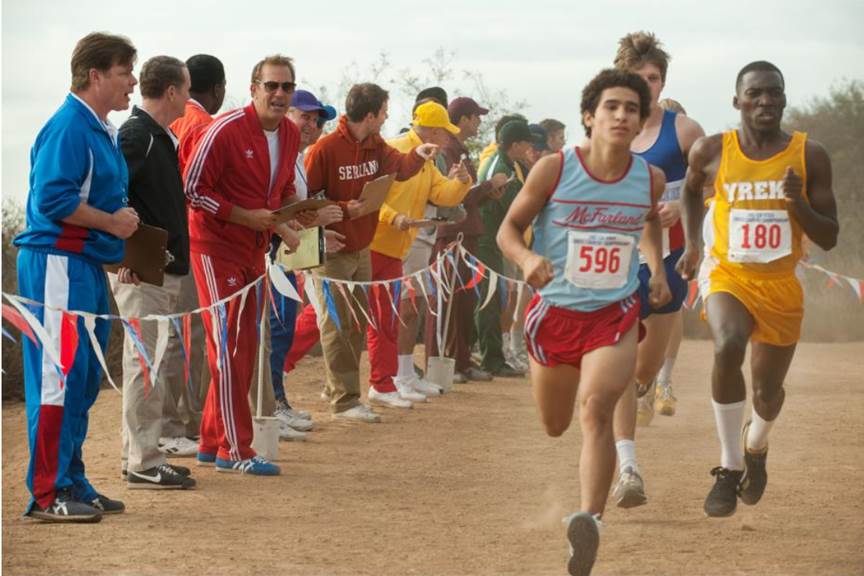 Actor Rafael Martinez, who is by nature soft-spoken and polite, admits that he cut school in order to audition for the movie. Needless to say, having won a role, he has no regrets.

Prior to the start of principal photography, director Niki Caro organized an informal gathering for the on-screen White clan that proved insightful for her and the actors. In pre-production she assembled the actors together—Kevin Costner, Maria Bello, Morgan Saylor and Elsie Fisher—and had them play Monopoly as a family unit. The interesting exercise kick-started a family dynamic that lasted for the entire shoot.

Even MORE Fun Facts About The McFarland USA Cast

Kevin Costner, who plays Coach White, was a great hit with the young actors. He quietly mentored them and offered advice if they wanted it but for the boys, listening to Costner’s stories and watching movies with him in his trailer was a highlight. They felt so comfortable with the famous movie star that they even nicknamed him “KC.”

Like the real McFarland team, all seven young actors had to train to become champion runners. Although some had more track and field experience than others, all of them took their drills very seriously. Mark Ellis, the coach hired to train them for the film, would have it no other way and the team evolved over time. But training them wasn’t as simple as merely putting shoes on their feet. Every morning at 8 a.m. the runners showed up for practice, which was literally running and more running to build up endurance. 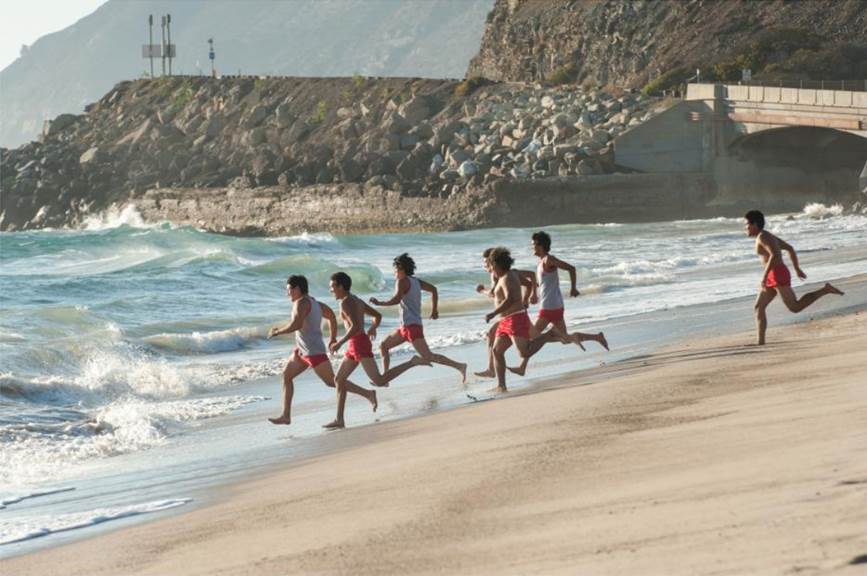 In the script, the character Thomas Valles, played by McFarland USA cast member Carlos Pratts, is a natural runner with prodigious talent. But the reverse was true for Pratts, who zealously prepared for the cross-country scenes and in the process, became a runner. In addition to drills with the film’s running coach, Mark Ellis, Pratts worked out with personal trainer Brian Nguyen. Nguyen famously got Mark Wahlberg into boxing shape for “The Fighter” and did likewise for Pratts.

The production took the McFarland USA cast and crew to some of the most beautiful spots in Southern and Central California, from Lake Castaic to Malibu to the Griffith Park Observatory, in addition to the fields and neighborhoods of Bakersfield and McFarland.

There were some unique cinematic opportunities in the filming of the movie, especially the embankments of almonds covered in protective plastic that served as training hills for the team. The expanse of these weird mounds across the landscape was visually arresting and certainly emblematic of McFarland, home to Blue Diamond Almonds.

You Thought I Was Done With The Fun Facts About The McFarland USA Cast?

Classic lowriders are featured in “McFarland, USA” in several scenes. Lowriders are custom cars fitted with hydraulic jacks that allow the chassis to be lowered almost all the way to the road. Lowriding was very big in California’s Central Valley in the mid-’80s with Bakersfield being one of the lowriding epicenters of the area. Lowriding is often stereotypically depicted as gangster-related in film but the reality is that these car clubs are essentially about family and community and the cars are lovingly treasured.

Director Niki Caro took particular interest in the “hero-car” lowrider vehicle—and not just in the service of the movie. The car actually belongs to Caro and she likes to drive the 1970s Chevrolet Caprice, which was customized to the movie’s specifications. The beautiful classic features an iconic chain steering wheel and a mural on the hood that is in the likeness of the owner’s girlfriend in the film, Lupe. The painting is in the style of the Virgin of Guadalupe, which is an ongoing visual theme in the movie.

Love it!! What a great look behind the curtain!! Be sure to take the family to see McFarland, USA cast and movie. You will not be disappointed.

McFARLAND, USA is rated PG and is now playing in theatres everywhere! Are you excited to watch the McFarland USA cast in action?