Listen, I am going to start this post off with a bang. Or better yet… a kiwi. Before I even get into why I think Deception should be on your list of shows to watch, I want to show you a clip of the man behind the curtain. Meet David Kwong – my new magician obsession.

As soon as I came home from my trip with Disney and ABC, I rushed to show the kids this video of David Kwong doing magic tricks. I have a son that loves to dabble in the arts. He’s always attempting to come up with a new illusion and I just KNEW that my experience with David would translate really well with my clan.

That’s how I opened talking about Deception with my family. I told them that David Kwong helped the writers of this show come up with really neat ways to mess with our minds. A crime-fighting adventure with a twist – a magical twist! By the end of my pitch, everyone was searching for a deck of cards and a quarter because THAT’S what magic does to people – it opens them right up to new experiences.

Our meeting with creator Chris Fedak and magician David Kwong was special. It was obvious they had a true passion for this project and that passion was contagious. Jack Cutmore-Scott – the lead in Deception – looks like an actual magician while filming his scenes. There are tricks that he does using just one stationary camera. Of course, TV has plenty of room to play with, but you also cannot deny that Jack studied up before taking this part.  Both David and Chris agree they got very lucky with their lead.

David Kwong: We got very lucky that Jack Cutmore-Scott is very dexterous and loves magic. He didn’t have the skills already but he worked very-very hard and continues to work with me and our New York magician Francis Menotti. He’s always got a deck of cards on him. He’s always got a pocketful of coins. It becomes an obsession, like a practice hobby. You just keep at it and keep at it.

Chris Fedak: It was crazy. When we cast the show, we always assumed we’d have David’s hands doing all the magic.  But then as we got closer and we cast Jack and we were lucky to get him. He was charming and handsome.  And the thing is is that he’s also an obsessive.  So as we were walking around the production offices in New York getting ready for the shoot, I’d see Jack working on a trick, and I just thought, I’ll just tell him we’ll just do the viz effects.  That’s not okay for him. He is a perfectionist.

My partner in crime, Francis and I, we would show our friends and call people up and run things by them.  These are people that build their careers on these trade secrets. So, we had to be very-very careful to stay away from anything that would ruin anyone’s magic show.  So there’s a couple of rules.  If something is a hundred years old, and no one is doing that anymore, you can usually put that on screen.

If someone has resurrected something from a hundred years ago and they’re now doing it and they’re making a career out of it,  leave it alone.  The other fun thing is if we just come up with it on the spot and we invent our own new method, new trick, we can put that on screen, because it’s our own thing.

Did you even think about that?! Because I didn’t! Would showing how some of these tricks are done through these episodes ruin other magician’s acts? Wow! I love that they are consciously respecting their community because you and I both know that legally they don’t have to do a thing. This is truly a courtesy to the field and I utterly respect them for it.

But where is the line? How much is too much when it comes to revealing trade secrets? Do people NOT want to know? Is it better to keep everyone within the illusion? Chris says there are plenty of people out there who truly don’t want to know the HOWs and the WHYs. They just want to be left with the wonder.

There are people that don’t want to know. There are people who want to figure it out. These people will get upset.  I’m slow, so I’m always like one step behind.  And since I’m writing I know and wish I didn’t. If I was out in the audience, I would be the one that wouldn’t figure it out but still I kind of like that.

Can we expect more guest stars? In the first episode, we get to see some big names come through. Will there be more of that? David hopes so!

We hope so.  We have Penn and Teller in this one.  And we want this to be something that magicians love and respect and they’re going to pop up in it.  We hope so.

We noticed that in this show, many of the positions of power were held by women. We all know this is not something that is typical! It was refreshing to say the least. Keep your eyes peels for these women through – both good and bad characters. I don’t want to say too much about this because I rather you go in with a clean slate.

Pilot Synopsis:  When his career is ruined by scandal, superstar magician Cameron Black has only one place to turn to practice his art of deception, influence and illusion — the FBI. Using every trick in the book and inventing new ones, he will help the government catch the world’s most elusive criminals while staging the biggest illusions of his career, on “Deception,” .

*Travel and accommodations were covered by Disney. All opinions are my own. 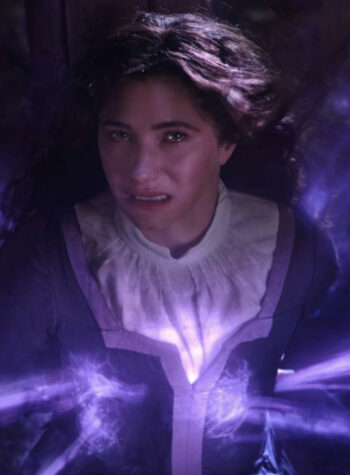