I wanted to create this post for easy soup recipes for a long time. I love soup. Like I am in LOVE with soup. It makes me so happy. And I have found that soup is such an easy recipe to make. I adore things that are easy. In fact, it’s basically a requirement. 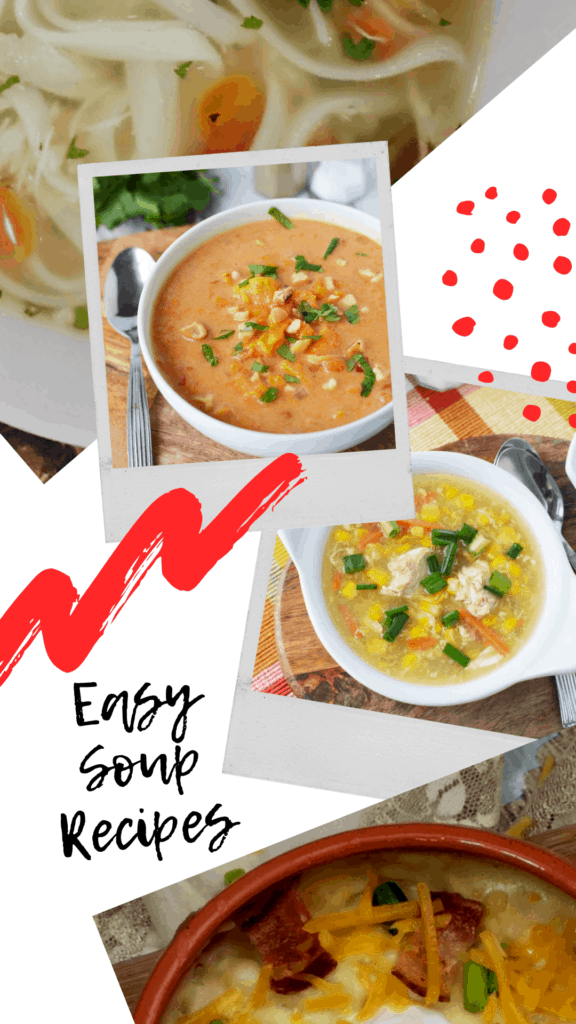 Soup is warm, filling, and smells amazing. It can be packed with everything you and your family are into. Vegetables? Check. Protein? Yup. Noodles, rice, unique spices? Yes, yes, and heck yes.

Read on to check out some of my favorite soup recipes and answer any question you (and I) have ever had about soup.

What is the best kind of soup?

Honestly, the best kind of soup is any kind YOU love. Since soup has been served since ancient times, there are millions of kinds of soups. Legit. Millions. Every culture has their go-to soups and lucky for us in the US we get to sample many of them because of the melting pot nature of our country! Yay for immigration!

Whether it’s a spicy Pho from my favorite Thai hole in the wall, egg drop soup with my orange chicken, matzo ball soup with a New York bagel, or a hearty pasta fagioli before downing my lasagna, there is no shortage of soups I adore. I hope the easy soup recipes I am sharing with you will add to the diversity of the soups you and your family enjoy. 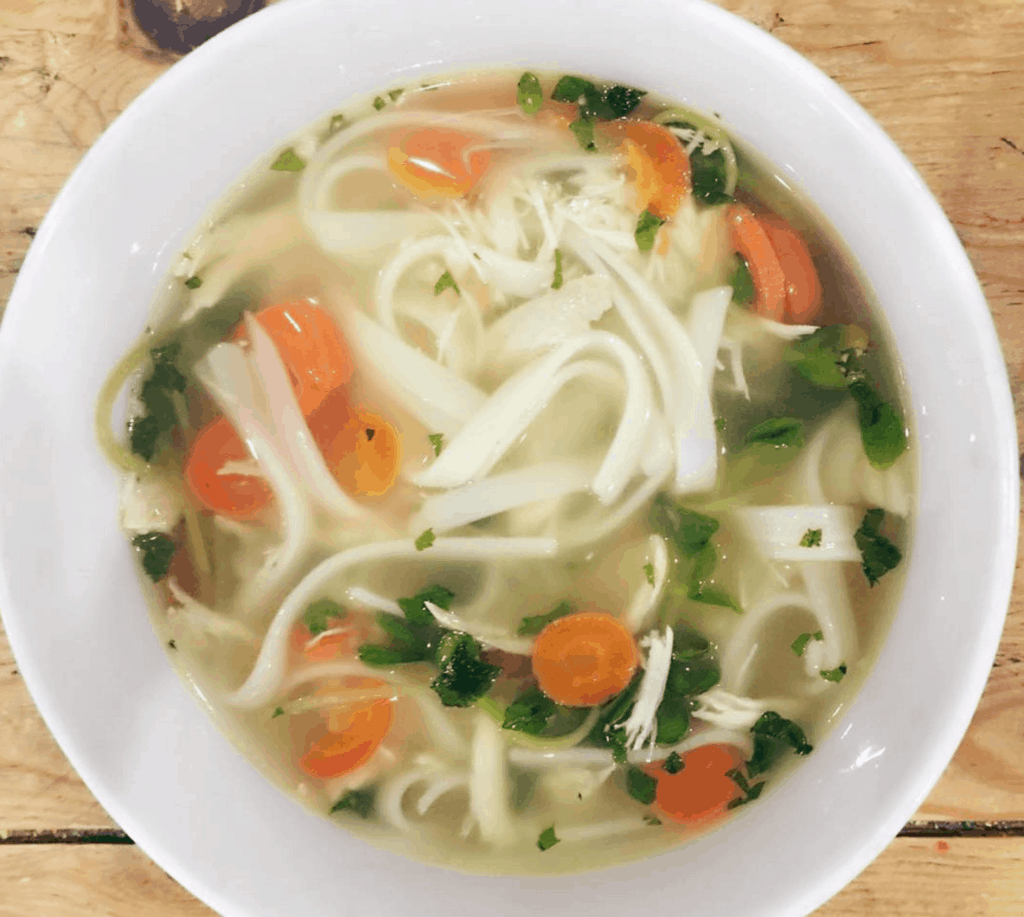 Here are three of my favorite easy soup recipes:

Set it and forget it! Yes, you can totally make soup in a slow cooker. In fact, it’s one of my favorite ways to make soup. Putting all the ingredients in a pot and then going about my day is my kind of cooking! 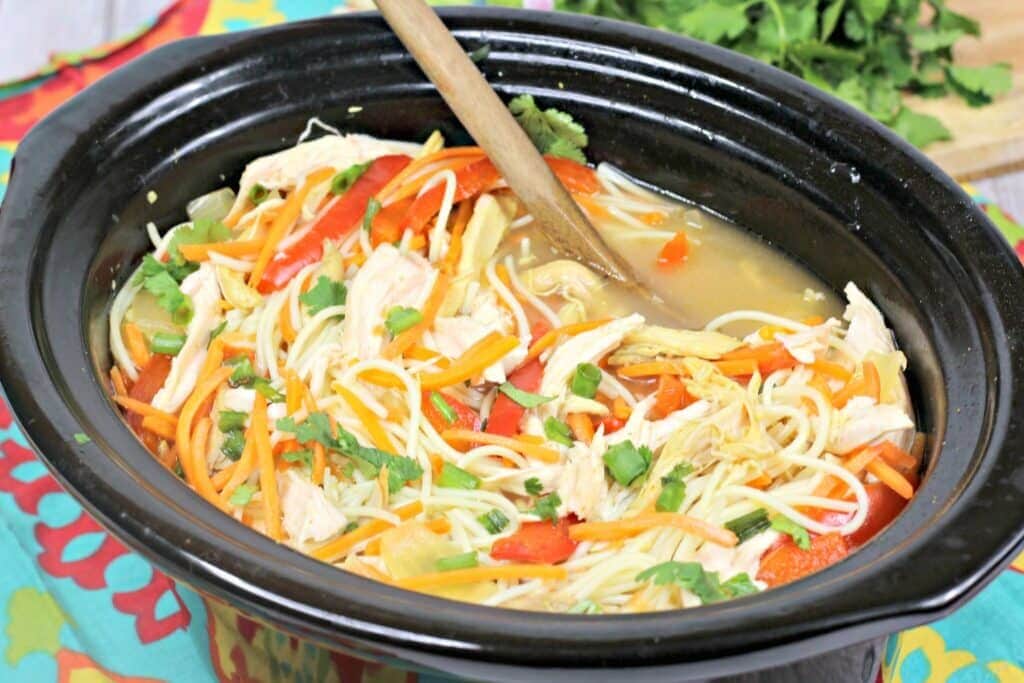 It saves me time and energy and my family is in love, love, LOVE with my slow cooker soup recipes. Go ahead and use your pressure cooker or Instapot with these recipes too. Some of my favorites include my Chinese Inspired Slow Cooker Chicken Noodle Soup, my Instapot Beef Stew, and this Easy Pressure Cooker Chicken Stew.  Don’t forget my Slow Cooker Bean Soup Recipe Made With Smoked Andouille Sausage!

What Are The Best Soup Garnishes?

Soup can be easy and straightforward, but it definitely doesn’t have to be boring. Even my favorite soup recipes could use a little extra something, something to spice it up as a garnish. Many people think a soup garnish just makes the soup pretty. Ok, it does that too but a good soup garnish makes the soup taste even better too. 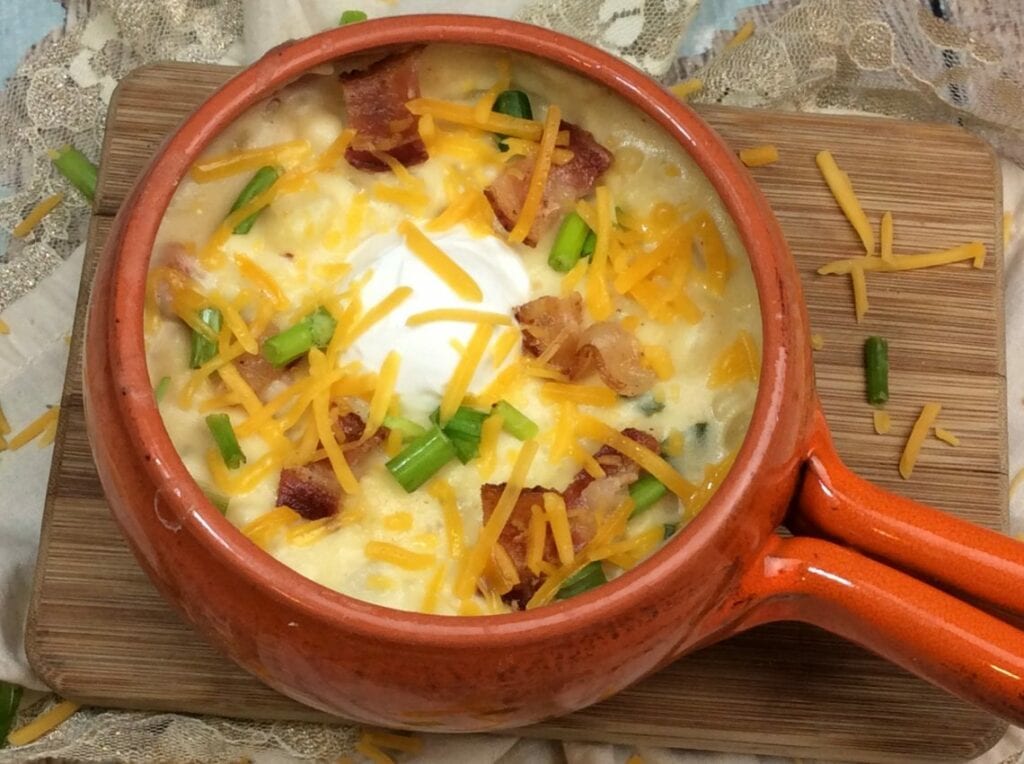 Sometimes the garnish can be something you already included in the recipe such as diced tomatoes, fresh cilantro, or .chopped onions. Other times, you can throw some shredded cheddar, bacon, sour cream, or green onions to add color, crunch, and dimension to your soup recipe.

I added all 4 of those delicious ingredients for an awesome soup garnish to my Loaded Baked Potato Soup. The. Best!

Is Soup An Appetizer Or A Main Meal?

One of the best things about these easy soup recipes that I love to share is that they can be modified however you want! You can make your soup a full meal or if you are all fancy and serve your meals in courses, serve it as an appetizer or first course. 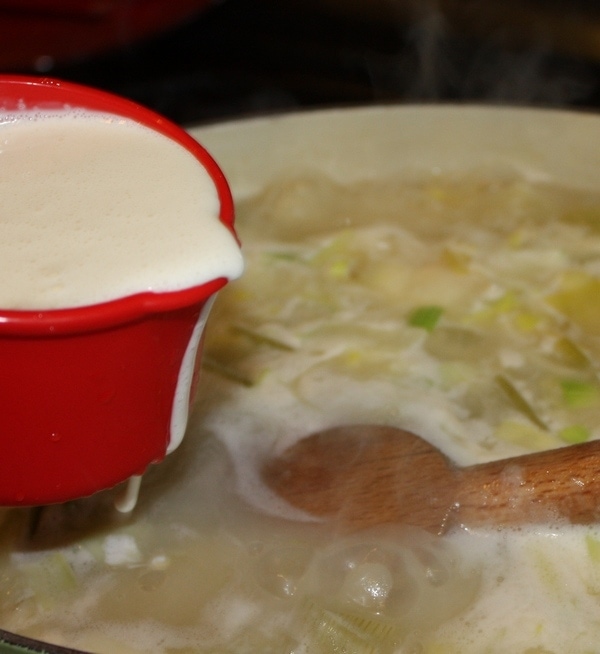 Do you! No matter where or how you serve it, soup is so tasty. I especially love this Potato Leek Soup as an appetizer.

Gazpacho Anyone? Hot Vs. Cold Soup

When it’s hot outside a steaming cup of soup is probably not the ticket. This is why so many cultures make traditional cold soups that tend to be lighter. They usually contain less fat and meat per serving too. A lot of cold soups can be all vegetable or use lighter meats, fruits or fish stock.

Gazpacho is the most well-known cold soup in the United States. It is a Spanish dish but remains popular all over the world. Most Gazpacho soup recipes include cucumber, bell pepper, stale bread, tomatoes, olive oil, garlic and onions, wine vinegar, water and salt.

While it’s not typically eaten cold, I love this ramen noodle soup recipe. This easy soup recipe is lighter and won’t make you sweat out your blow out.

Should You Really Eat Soup When You’re Sick?

Short answer: Why not? While your mom’s chicken noodle soup won’t exactly make your cold go away, there’s a reason why it’s been known as a natural remedy for colds for generations. There is some science behind this idea.

The Mayo Clinic confirms that chicken soup can be an anti-inflammatory, and clear up mucus too. Plus, let’s be honest, it just tastes good and there’s something to be said for TLC curing a cold too. Next time someone in your house is battling a virus, try this Slow Cooker Chicken Noodle Soup recipe. 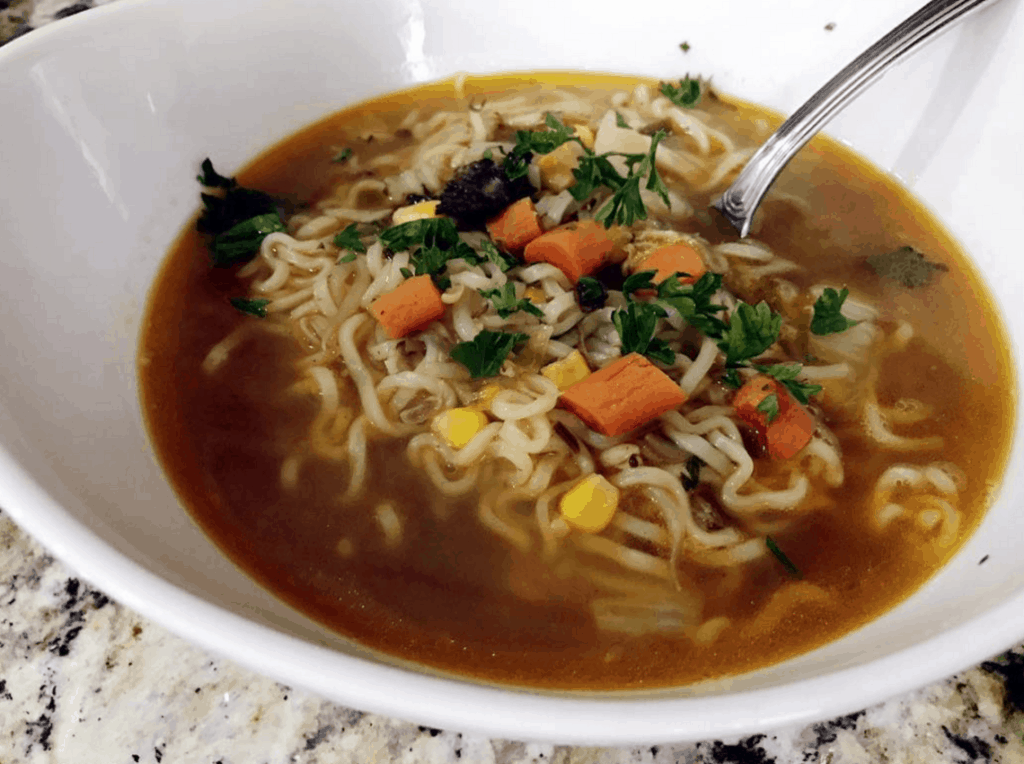 Why Is Homemade Soup Just So Much Better?

Like anything else, fresh ingredients, no preservatives, and your proprietary blend of spices can make just about anything taste better than canned soup. (Though, let’s be clear, I’m not above using canned soup or ingredients. I like easy, remember?)

When you walk into the kitchen after a long, trying day, there is nothing better than smelling a delicious soup all warm and ready for you. And, [hint, hint] it tastes even better when someone else made it for you!

I love being able to give my family a meal with homemade soup, knowing that they will devour it but also that they are getting all the healthy vitamins and minerals too.

Is Soup Good For Weight Loss?

The answer to this question really depends on which soups you’re eating. If you are trying to get back in your skinny jeans, stay away from cream based soups. Generally speaking though, soup is great for weight loss.

Researchers found that those who eat soup had better overall eating habits, consuming a good mix of protein, fiber, and vitamins and less calories and fat.

A lot of soups have a high nutrient density, making them perfect for dieters. Go for soups that are full of beans, lean meats and vegetables. They will probably be lower in fat and higher in fiber, which makes soup a fantastic meal option for weight loss. My Carrot Soup is a wonderful option if you’re trying to drop some lbs. And it tastes amazing. 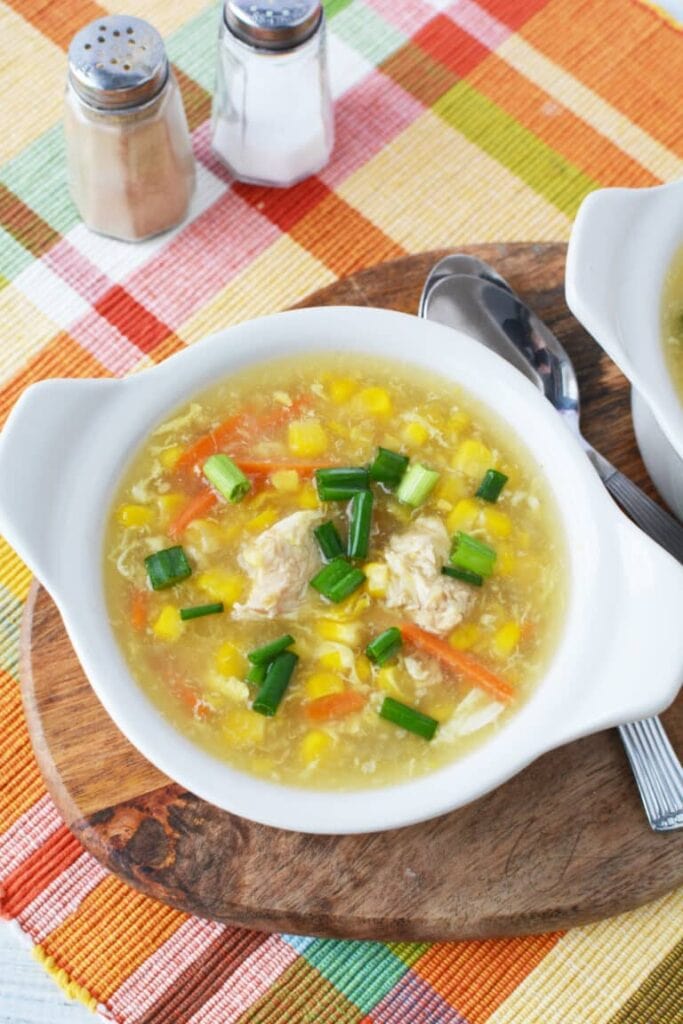 Can Soup Be Frozen?

Yes! You can totally freeze soup! The key is cooling the soup before you try to freeze it. You can put it in the refrigerator but that might not do the trick fast enough. Experts say to put the whole soup pot in an ice bath in the sink so it can cool down.

Store it in individual ziplock bags. And be sure to label them. Leftover soup will last up to 3 days in the fridge or up to 1 month in the freezer. Make it now and freeze it so you can be set all year long! My Chicken Corn Soup is one of those soups that taste better the next day and doesn’t lose flavor when reheated.

Can Soup Be Left Out Overnight?

Here’s the thing, just because something is possible, that doesn’t mean you should do it. It is possible for me to run down the street naked, but I probably shouldn’t.

Same with leaving soup out overnight. Some people say that leaving broth-based soups out overnight and then reboiling the pot the next day is still safe.

The U.S. Department of Agriculture Food Safety and Inspection Service, however, recommends throwing out any food that’s left at room temperature for more than two hours, and after one hour if the room is above 90 degrees. 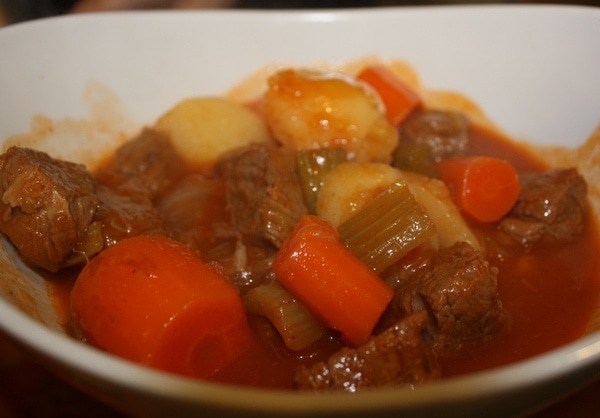 I don’t know about you but I’m going to err on the side of caution with this one. Want recipes that are so good you won’t ever have to worry about leftovers? Try my Cheater Chicken Soup or Beef Stew. You’ll be glad you did.

Is Soup Really As Healthy As People Say?

Unlike other cooking methods, soups keep the vitamins and minerals of cooked vegetables because you don’t get rid of the water they are cooked in. That vitamin-packed water becomes the delicious, savory broth you love.

Want more vitamins? Add in some puréed squash or root vegetables for a creamier and heartier version without adding fat or calories. Think about the way grandma used to make soup! She wasn’t wrong. 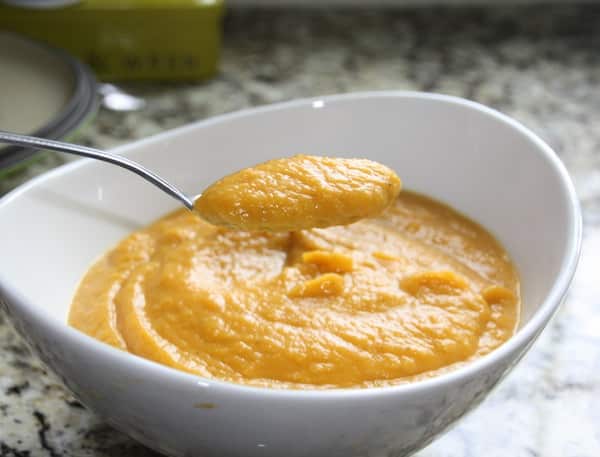 What Are The Best Vegetarian Options For Soup?

Do you think you have to be a carnivore to enjoy a good hearty soup? I have no idea why you’d think that because most soups are stuffed with vegetables. For many recipes, meat is actually optional. 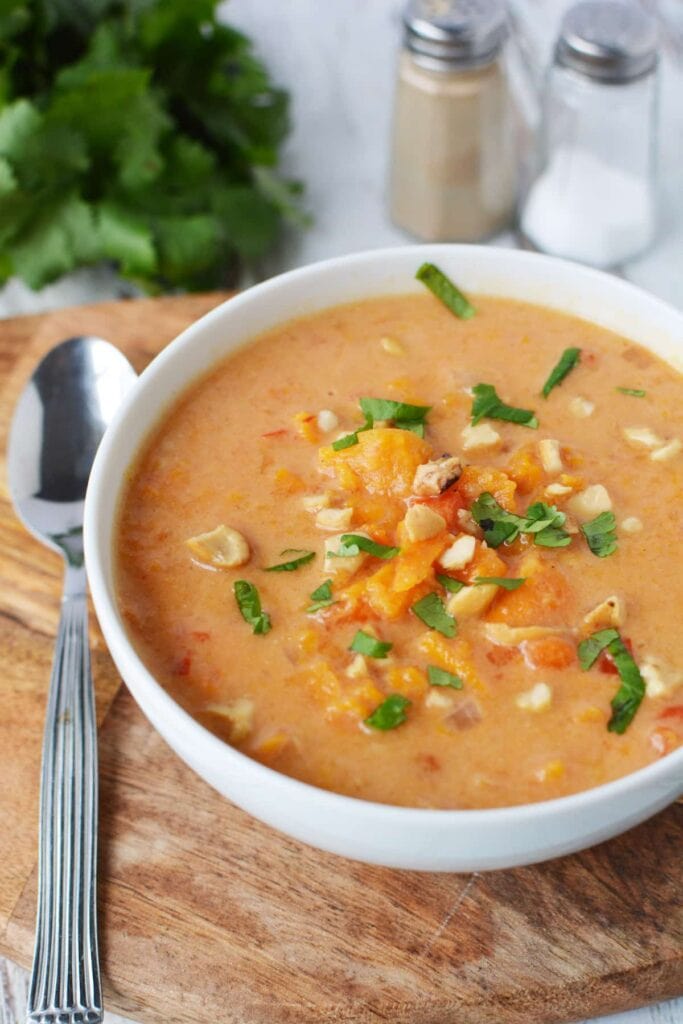 You can even make chicken noodle soup without the chicken! Just add more vegetables! Soup is a great entrée idea if you are trying to participate in the ‘Meatless Monday” trend or if you have some non-meat eaters to satisfy. My easy soup recipes for vegetarians include Butternut Squash Soup and Sweet Potato Stew.

Have any other soup-related questions? Send them to me! I’m pretty much a soup expert now. I hope these easy soup recipes can make your day a little warmer.