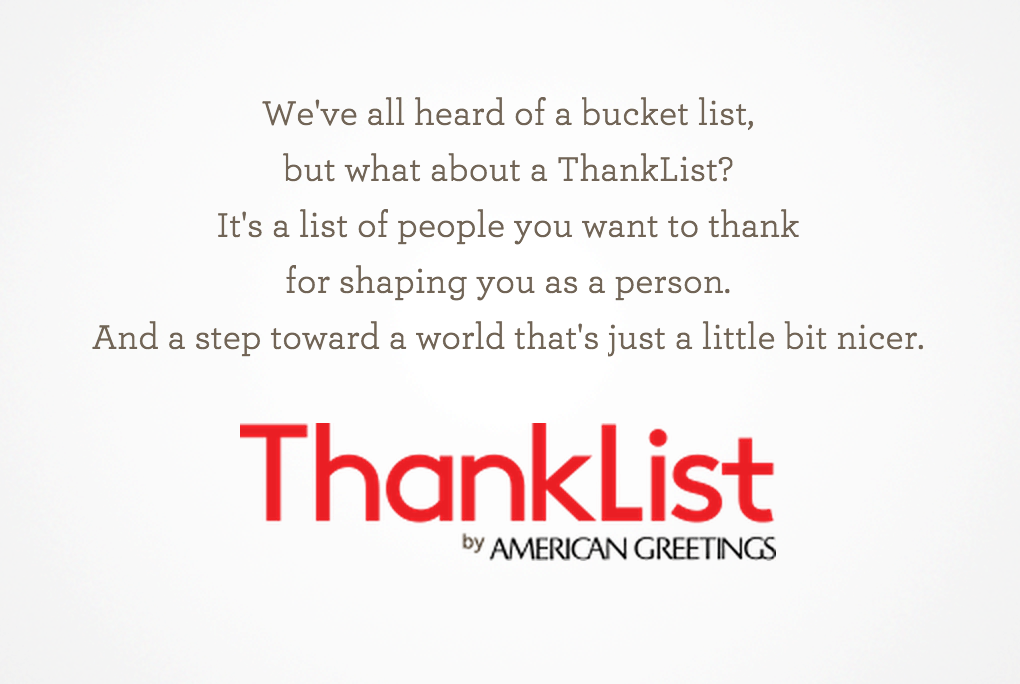 So, this is pretty timely. I mean, I JUST WROTE about how I feel that society has turned into a vicious version of itself thanks to the Internet and the safety of the screen. And America agrees with me. In fact, 95% of Americans believe our country has a civility problem and 87% of them are willing to do something about it.*

American Greetings realized that a change was in order and decided to team up with Two-time OSCAR® winning filmmaker Barbara Kopple to create, document and share the concept of the ThankList. What is the ThankList? Basically, it’s a bucket list of people you want to thank. Plain and simple. American Greetings followed five people as they created and then fulfilled their deeply personal ThankLists.

The internet connects. Digital connections unite. But do they really? Because the more time you are connecting with people via social media, the less time you are spending face to face with people you love.

Shake it off my friends. Let’s pretend it’s the 80s again. You know – even before the beeper! WHATTTTT???? Did people live back then? Yes, we did and it was amazing.

Introducing: ThankList by American Greetings. They stopped at nothing to fulfill all five lists. As each participant worked through their list, they documented the impact, importance and emotional resonance of gratitude. I’m warning you right now you are going to cry. You. Are. Going. To. Cry.

Amazing, right? UGH! In partnership with the Huffington Post, American Greetings hosted a private screening of the ThankList videos followed by a panel discussion on the importance of gratitude. The panel includes Two-time OSCAR® winning filmmaker Barbara Kopple, Arianna Huffington, Gabby Bernstein, Dr. Randy Kamen, Deepak Chopra and Elizabeth Banks as well as American Greetings president, John Beeder. It took place in NYC this week. I was invited to attend and was completely honored – especially considering that Deepak Chopra was attending, but Caleb wasn’t feeling well that night and I just didn’t feel right about leaving. Regardless of this fact, I still had to share this movement.

Who is on your ThankList?