What Is Cultural Immersion Travel? A Look At My Trip To China

I want to talk a bit about cultural immersion travel because I just came back from a pretty intense trip and I need to tell you all about it. There are two types of people in this world: Travelers and Tourists.

Travelers are individuals who like to see what it feels like to become part of a community/culture. They want to live like a local and really understand that “day to day” life. This – after all – is what it truly means to be from a particular country, right?

Cultural Immersion travel is a new buzzword that’s hitting the Internet with force. But in actuality, what we are really saying is to put down the brochures and instead experience things that aren’t found on top ten lists.

What Is Cultural Immersion Travel? 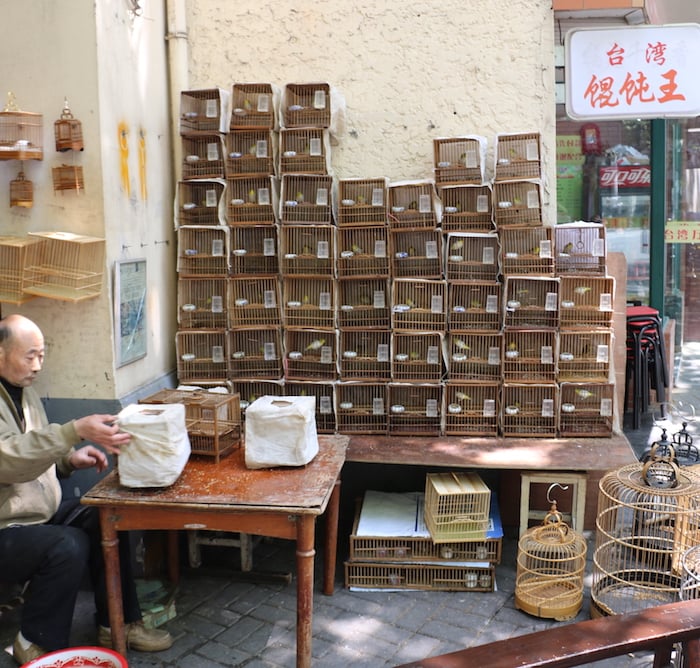 A tourist, on the other hand, likes to see shiny objects. They go for the big-ticket items and the “must-see” hot spots. They don’t necessarily care about how locals get to work or where they eat. Instead, they want to take away the highlights that the country has to offer and call it a day.

If I am being honest with you, I am probably more of a tourist than a traveler. What can I say? I like big, shiny objects. But there was something to be said for really slowing down and spinning things around. If I had planned a trip to China without the help of a tour company, I would have ended up with a very different experience.

Mandarin Journey took my trip, flipped me upside down and showed me a world that I would have never known – ever! They showed me back roads and side streets, local restaurants and amazing shopping marts. Heck, they even threw me on a motorcycle! I mean, I would have NEVER thought to set that up ahead of time? E-V-E-R

So, if you are a tourist (like me) and are looking for a way to visit Asia as a traveler instead, I have a solution. Cultural Immersion Travel will change your perception. It will alter the way you view vacation for the rest of your life. Are you really seeing what the country has to offer? Or are you just following along a predetermined script and missing all the real-life stories?

Here’s a look at my top immersion experiences with Mandarin Journeys. These are all moments I probably wouldn’t have had on my own. Thanks to my guide,  I was able to make these moments into memories. Please note: these aren’t my absolute FAVORITE MOMENTS from China. Those stories will be told at a later date. 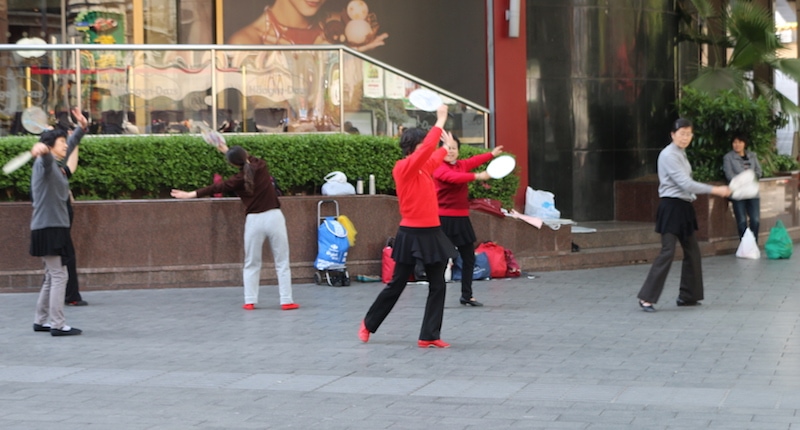 On one of our many walking tours, we happened across a group of women putting on a fan performance. They were just dancing in the street – right in the middle of a square. Turns out this is pretty common in China. I thought that was neat. If it’s not fans then it’s tai chi and if it’s not tai chi then it’s karaoke! Super fun! 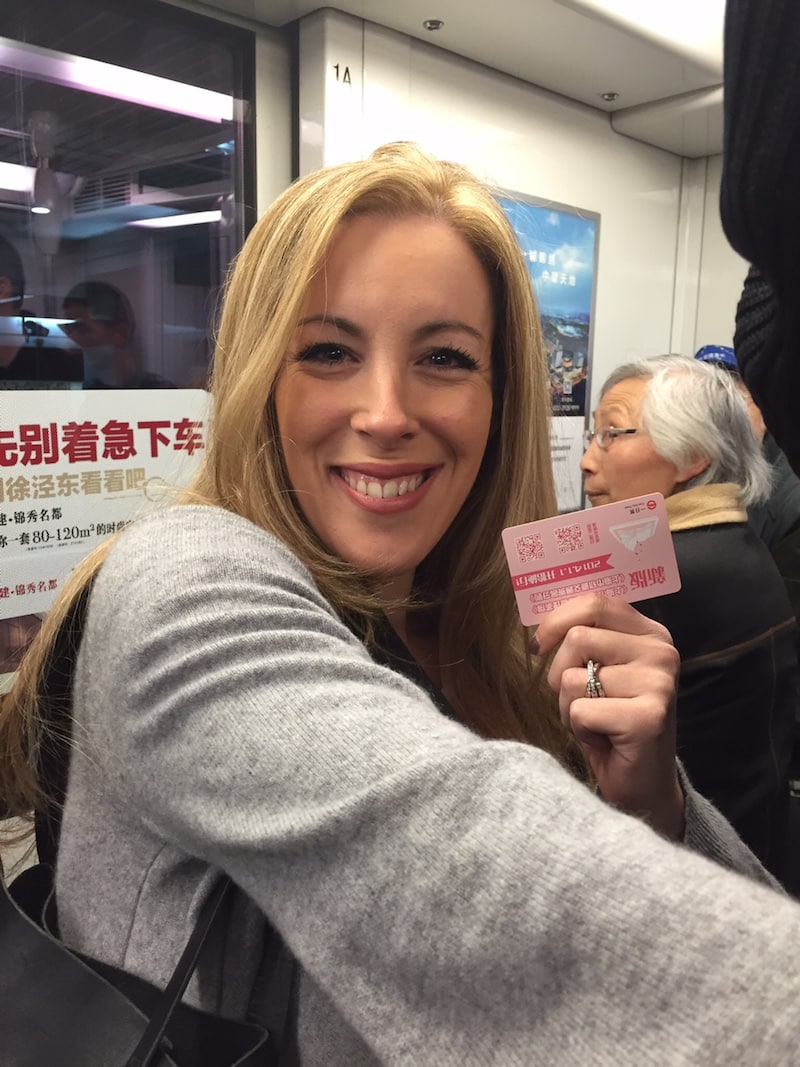 I rode the subway while in China. This is exactly what I’m talking about with immersion travel. Previously, whenever I flew overseas and planned on touring a city, I would hire a driver for the day. Not this time! This time, I was handed a day pass for the metro and got around like a local. (PS – in China you have to use the card to get IN and get OUT of the train station. Isn’t that interesting?) 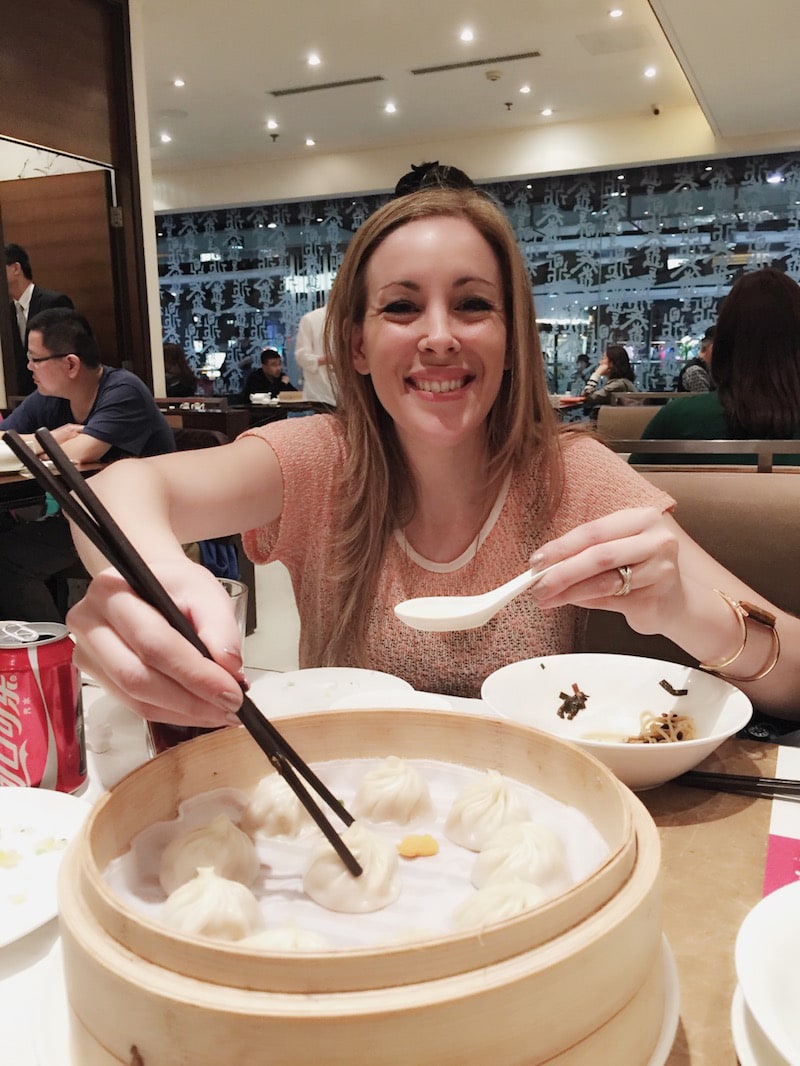 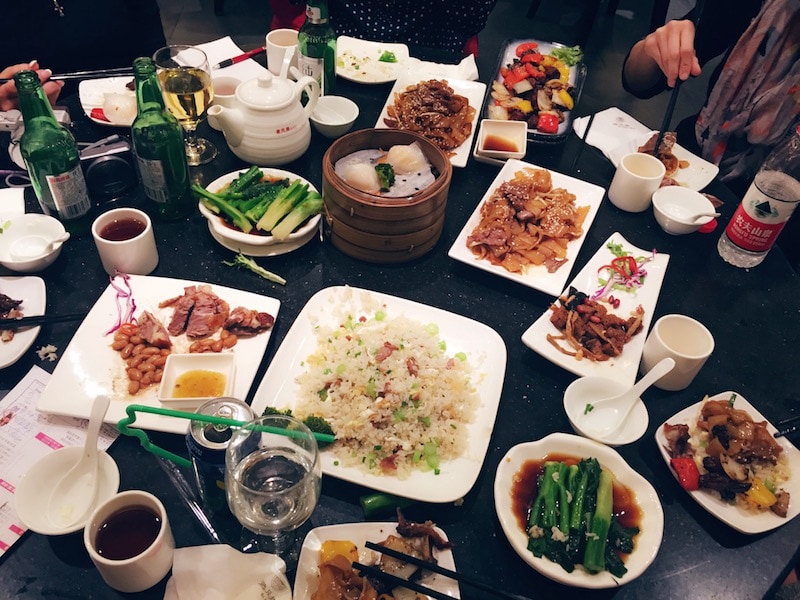 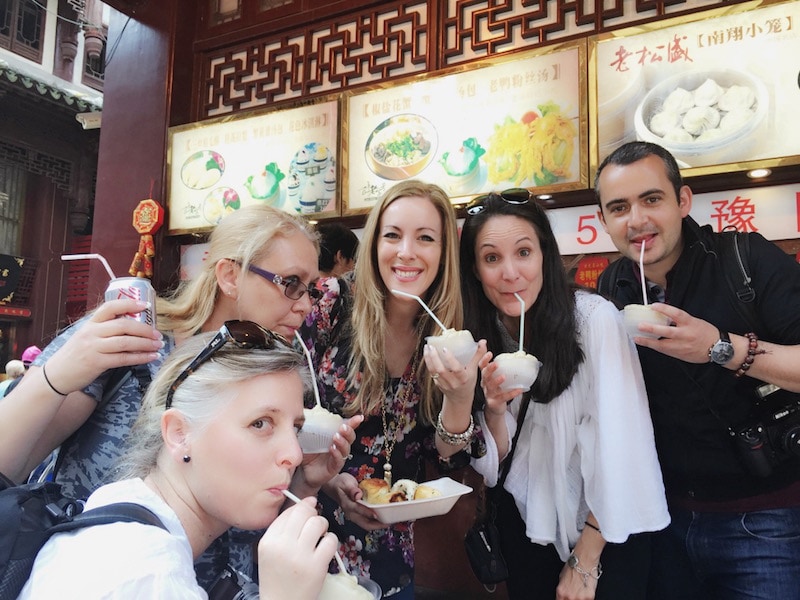 I ate food I would have NEVER EVER EVER EVER (ever) tried had I not been with Mandarin Journeys. I mean honestly — how would I have ordered it? How would I have known it existed?! While we walked down the street, our guide would stop, speak into a window and come back with a variety of options. It’s important to have someone who knows what’s happening. Otherwise, you might not have enough courage on your own to give it a try. 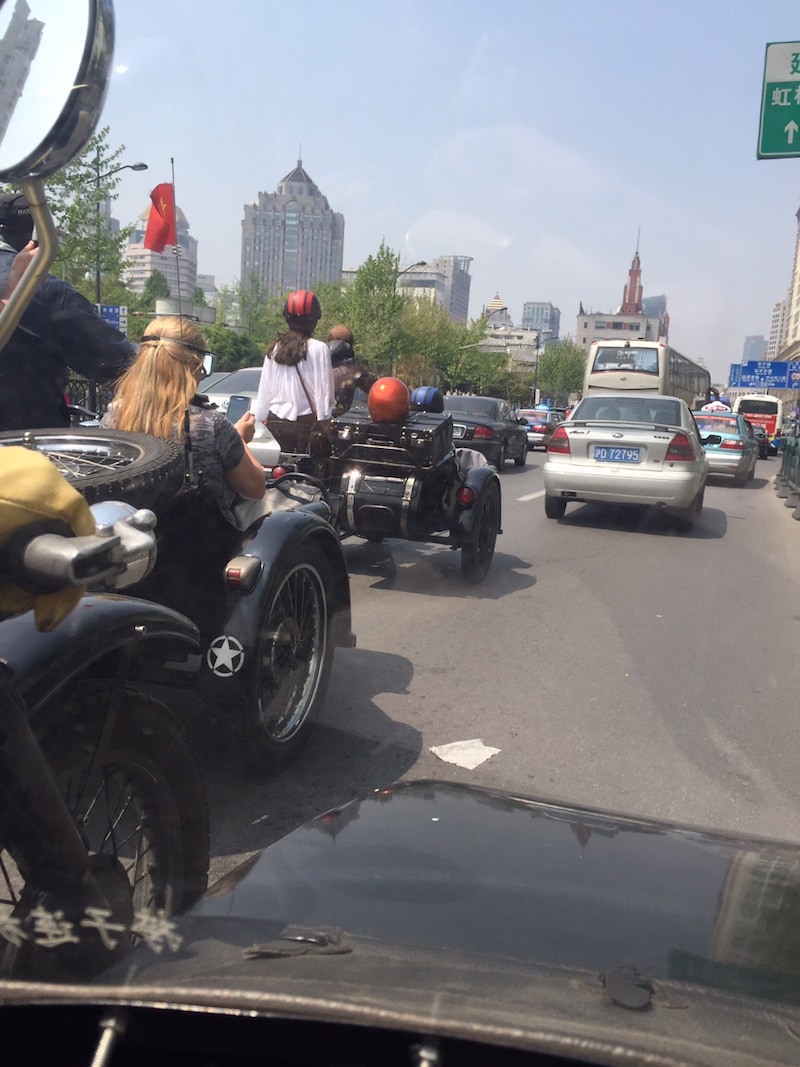 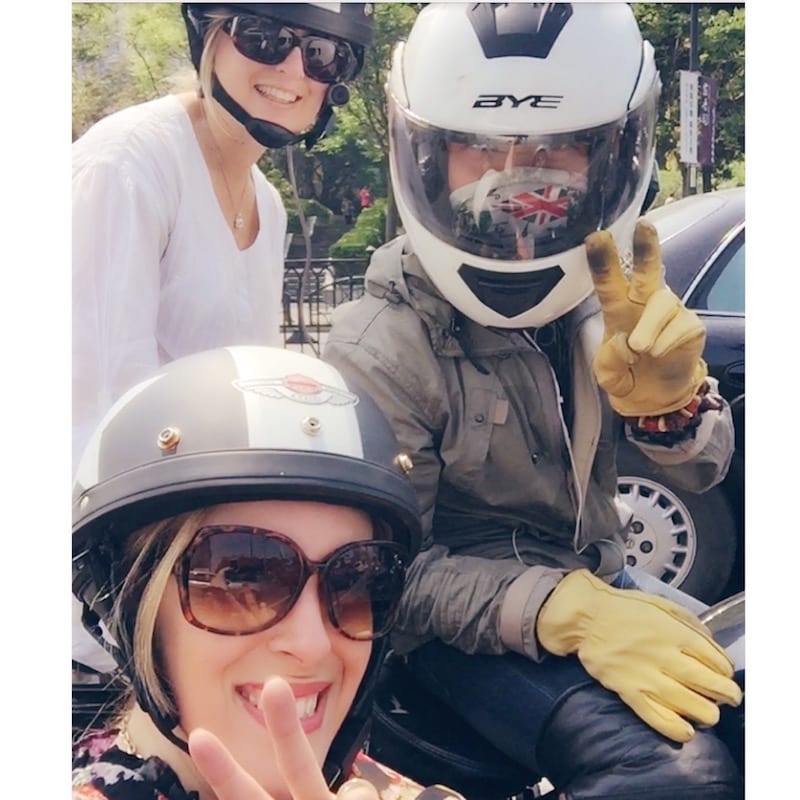 Motorcycle Tour. Me? Did it happen? YESSSSS. When in China you HAVE to try a motorcycle. I mean, it’s all they ride. There are 5 million people in Shanghai and I think 3 million of them are on bikes! So, it was super cool to get in a sidecar and see the city like a local. I was screaming – don’t get me wrong. But I am glad that I did it. 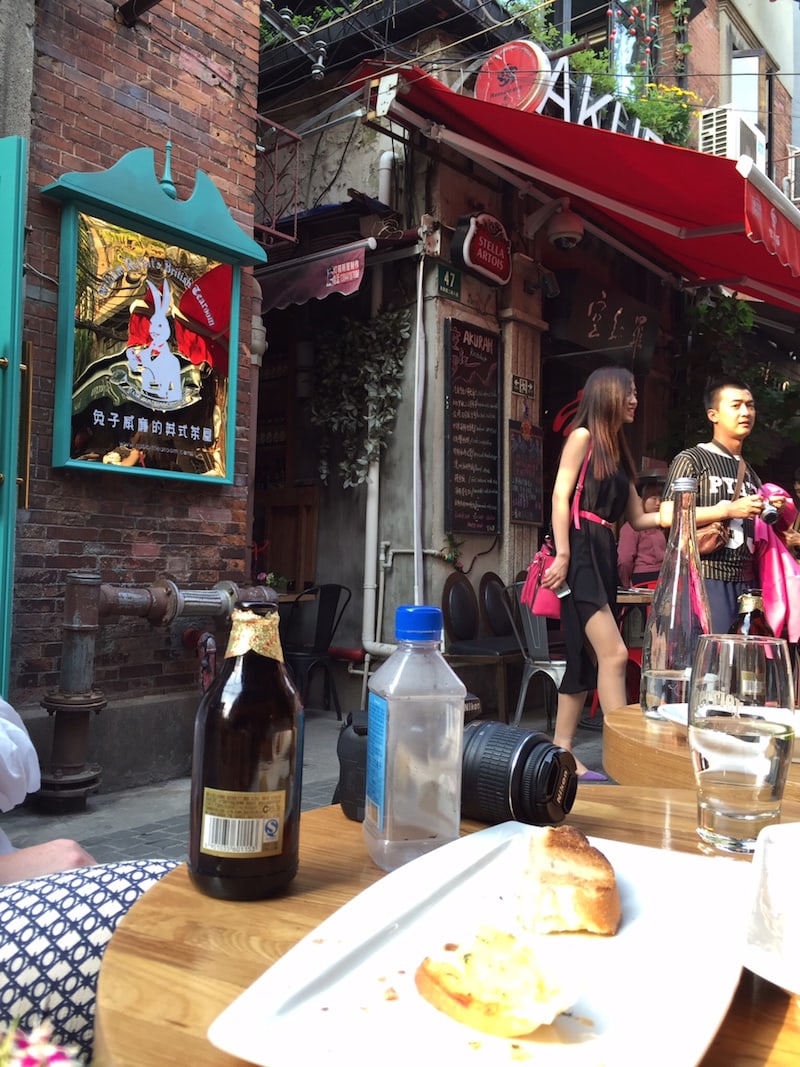 People watching. This was probably one of my favorite moments in China and I wouldn’t have been able to do it if I wasn’t on a Cultural Immersion tour. We weren’t on the top of the tallest building. We weren’t hiking up some famous mountain. We weren’t in the middle of some Buddhist temple.

We were simply in the middle of a market, sipping on wine, laughing the afternoon away and watching everyone WATCH US. I cannot tell you how many people took photos of us as we hung out on that corner. The places we visited were small, rural villages. It wasn’t typical for Caucasians to visit. The locals were very surprised to see us. That is an understatement!  Truly – this is a memory I won’t forget. 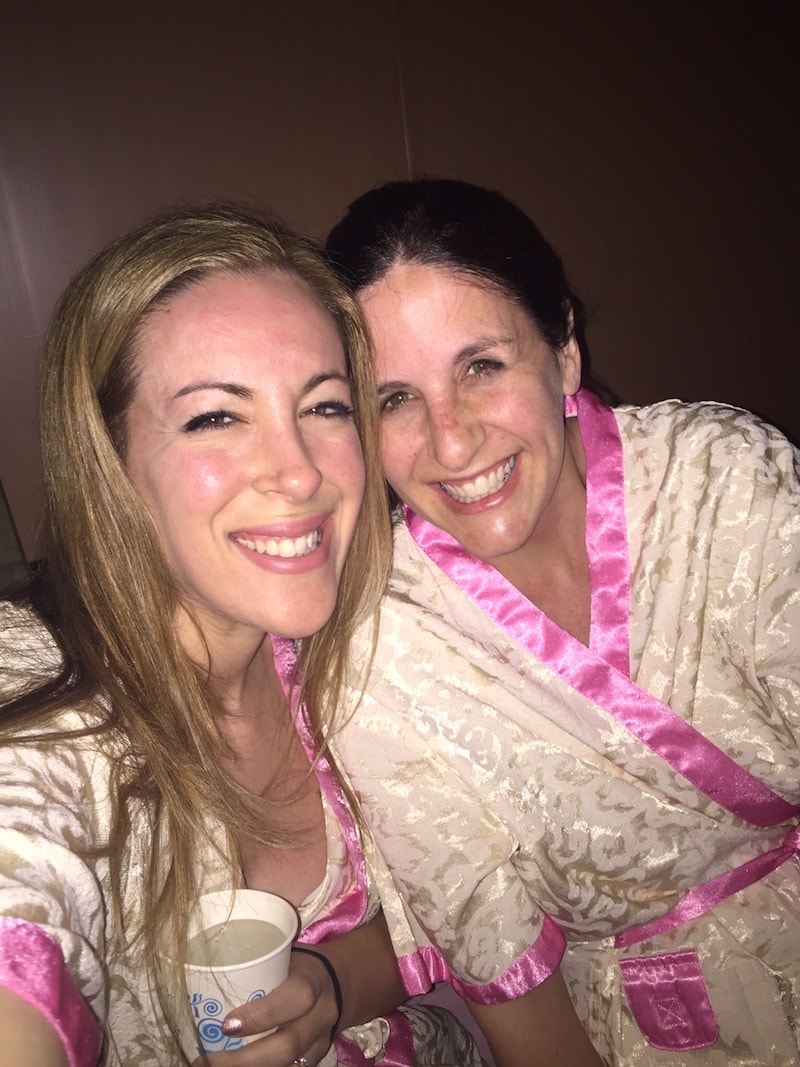 Chinese Massages are a bit different than your typical American versions. No oils are used which I found interesting. Instead, they put a sheet over your body and you keep on your robe and shorts. They also massage your rear… a lot. At least my guy did. I think I’m pregnant. Wait, what? 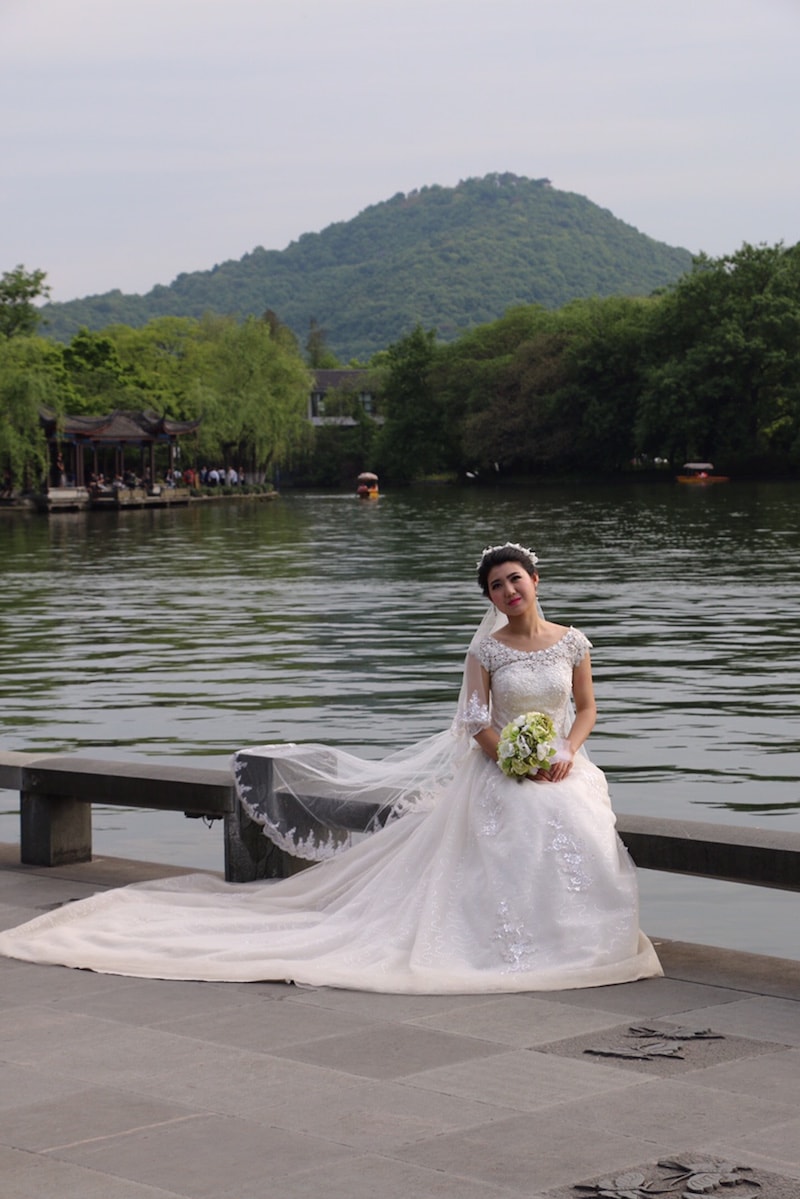 Brides. Brides. Brides. I cannot tell you how many photoshoots we saw – just about everywhere. But I learned something about these women. These dresses are NOT their real dresses. They are rentals!

You can tell when you got up close and personal. Chinese brides rent dresses for their photo shoots and keep their real gowns for their special day only.  Would I have seen all these brides had I not ventured into the small cities and away from the standard tourist’s hot spots? Probably not! This is such a great reason to take a cultural immersion tour. Seriously! I was so enamored with them all! 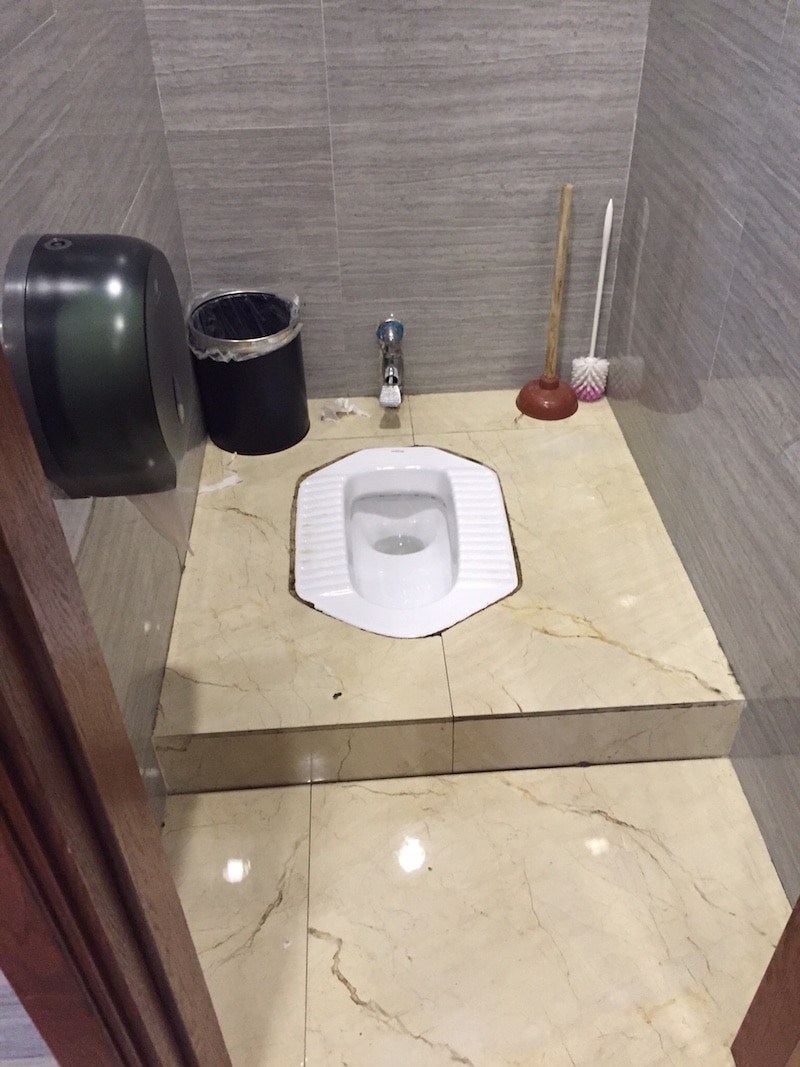 I don’t care how culturally immersed I was, I did not and would not use toilets like this one. The rest of my group managed to do it. I held my ground… and pee.  I have a bladder that could join an Olympic trial if they had one for “longest pee held”. I would win. I am a champion. 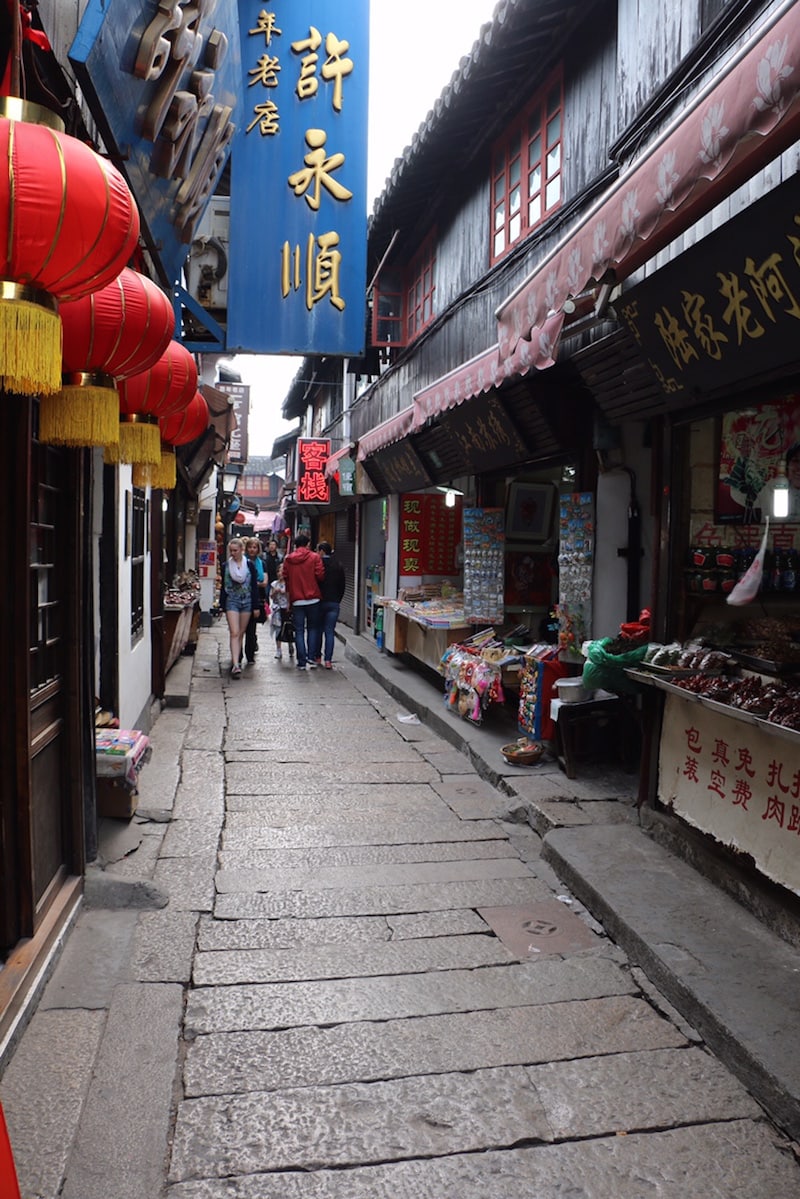 Back alleys and small shopping marts. If I wasn’t with a tour, I would have NEVER turned in and walked down these small alleyways. E-V-E-R!!!!! But I was assured that everything was going to be fine and it WAS. Always. It was almost like you couldn’t avoid stores. They were everywhere. I wish I took more photos of these small marts. I also wish smell-o-vision was a real thing. Actually, I don’t. 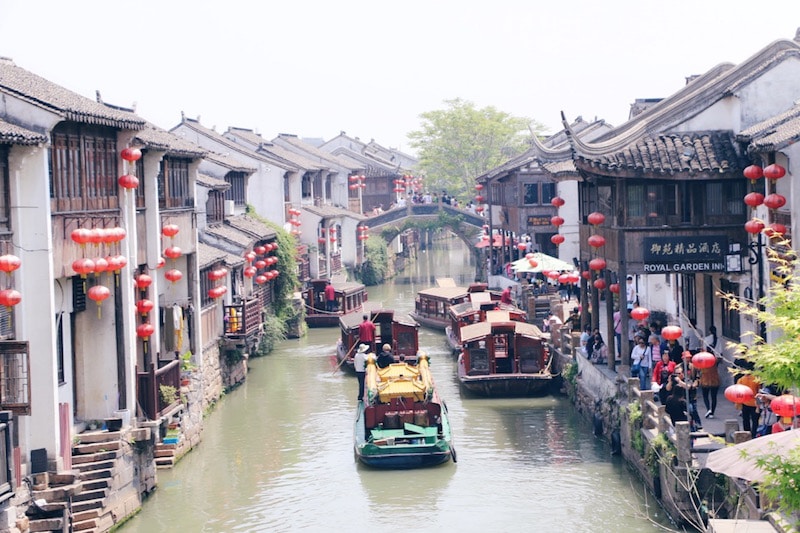 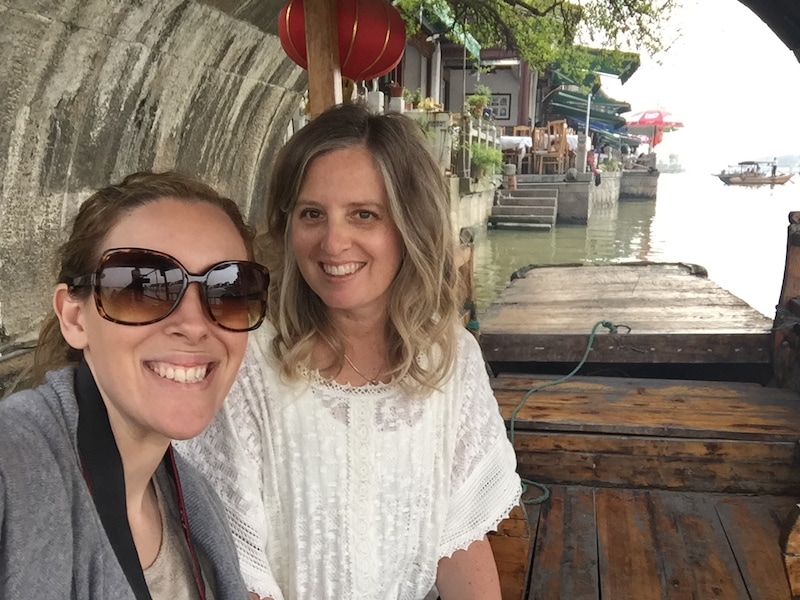 Boat rides!! We found ourselves traveling via boats several times throughout the week and it was SO SPECIAL. One time, towards the tail end of my trip, my friend Dana and I decided to hop on a ride on our own. We were given an hour to explore a town at leisure and we found the courage to jump in a wooden boat and see it by water. After being on one over and over again, I felt really comfortable with this form of transportation. So relaxing!! 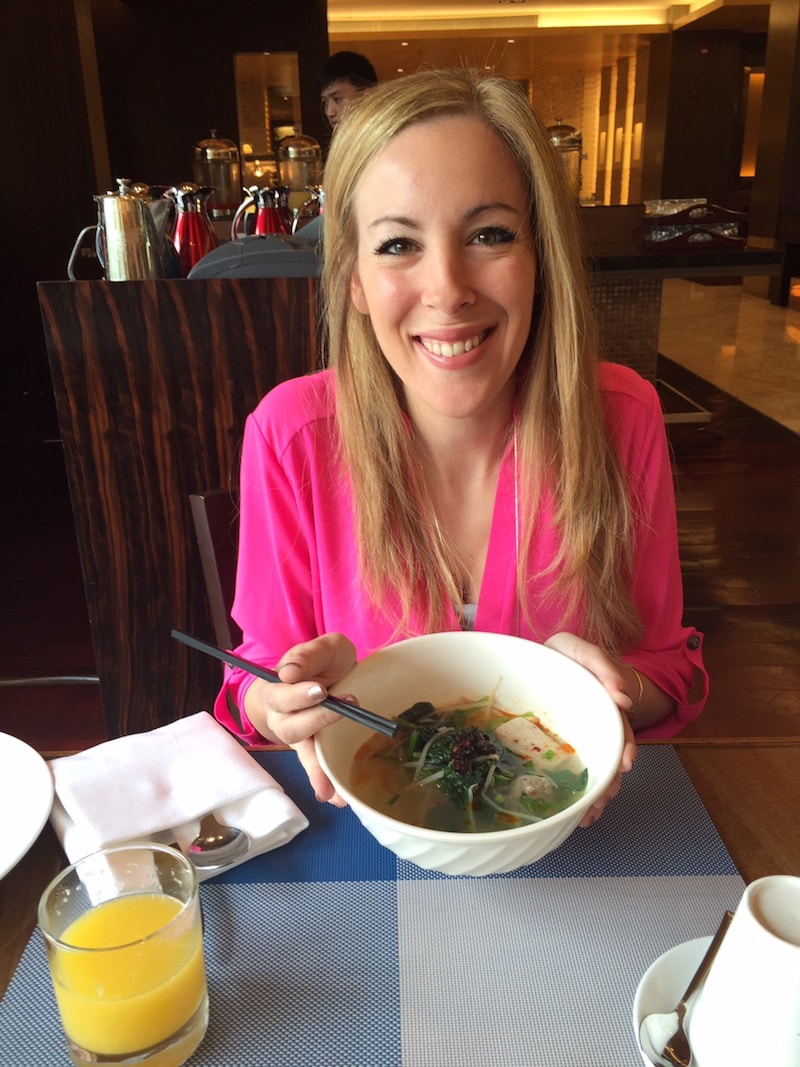 Dinner for breakfast. Ha! Honestly, I would have had an American breakfast at my American hotel every single morning of the week if I was on a typical trip. But because I was asked to push myself out of the comforts of my typical boundaries, I decided to “act as if”. So, noodles and dumplings for breakfast weren’t unheard of. 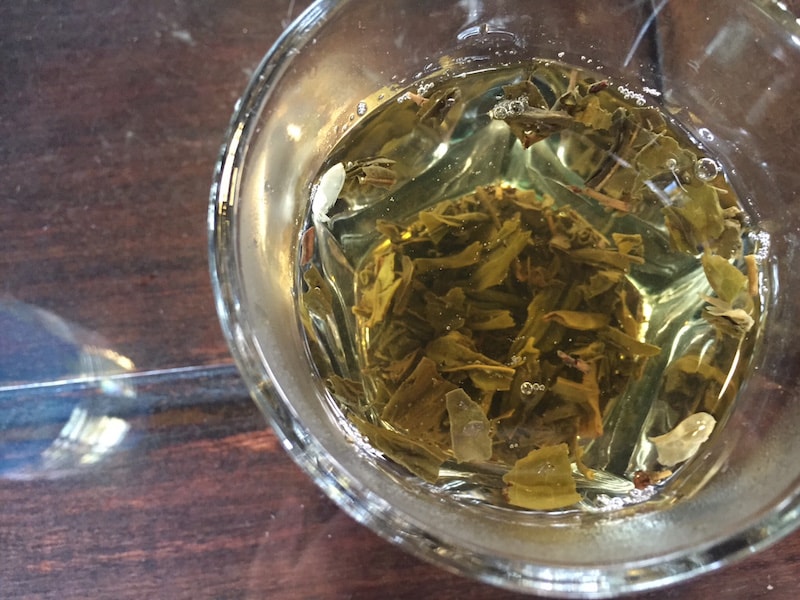 Tea – the tea in China isn’t strained. They give it to you with the leaves right there in the hot water. I was a bit turned off by the whole thing because it’s not how I do it at home, but I kept going with the flow whenever it was offered to me. And BOY was it offered! I’m so glad I learned about a different side of tea. 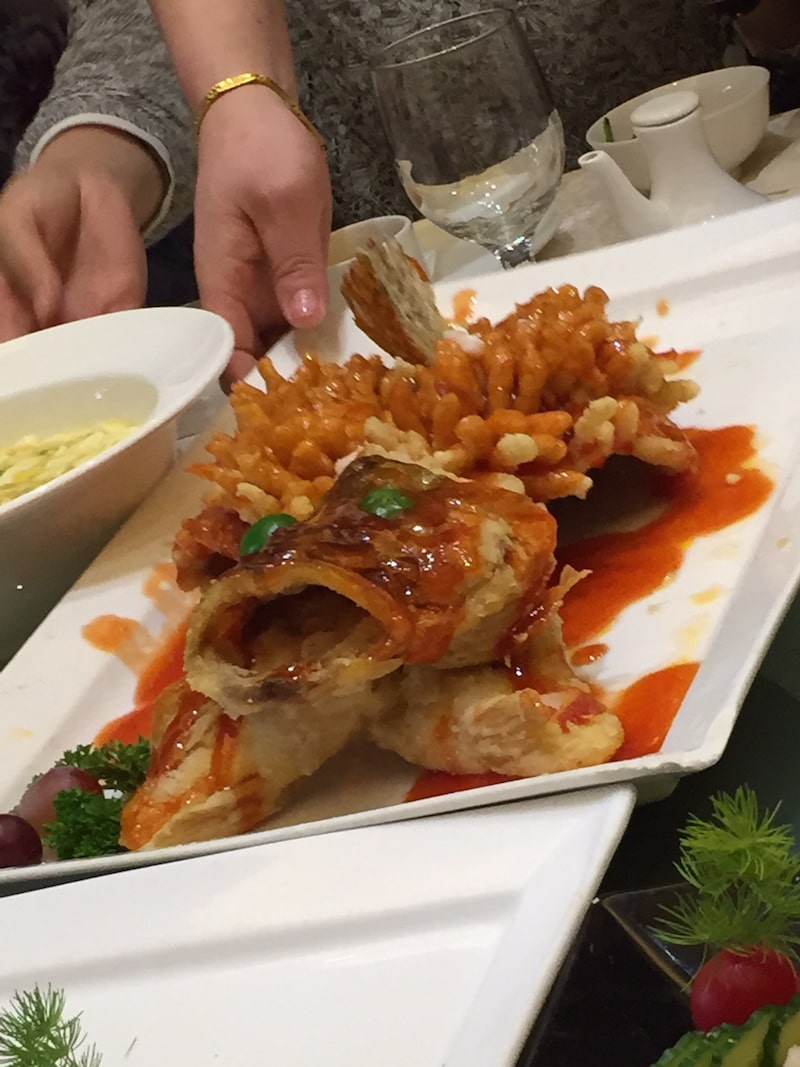 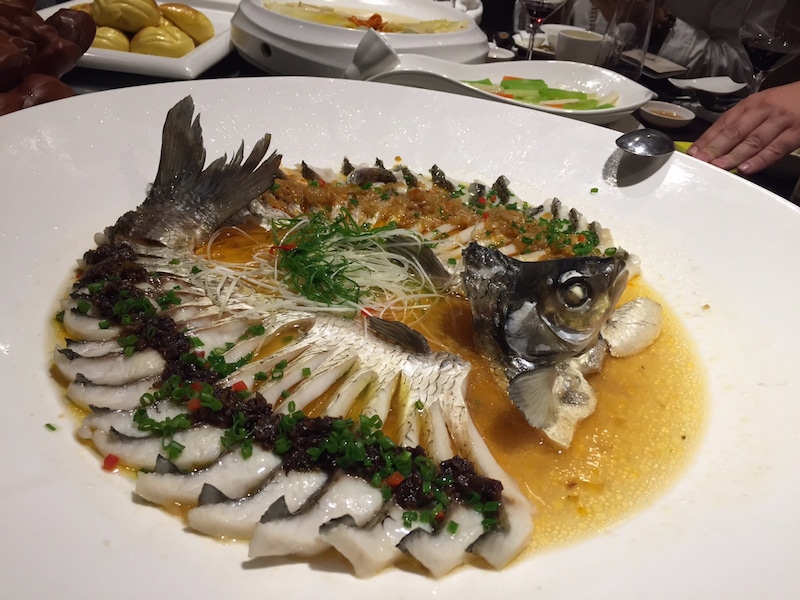 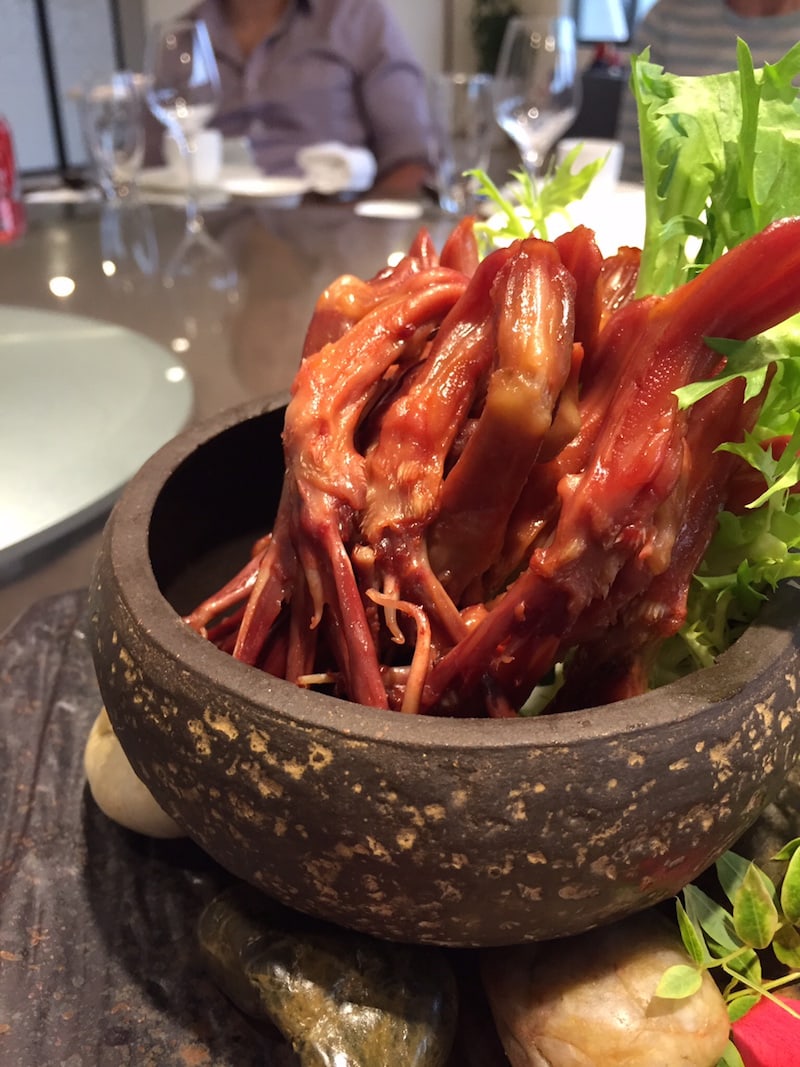 Different cuisine! KNOW THAT I WAS PUSHED HARD IN THIS CATEGORY. I am a CHILD when it comes to eating but I tried my best to not disrespect the group. I ate whatever I could handle and surprised myself over and over again.

The group didn’t know that I didn’t eat pork because I ate pork every single day even though I was silently aware of the fact that it was a very new experience to me. I know I eat bacon, but pork is not typically on my menu back home.

And when I say “not typically” … I mean NEVER. Neither is fish. Pork and fish and mushrooms made up 80% of what was served in China. I just had to accept that and move on. The group was in HEAVEN with the cuisine. I enjoyed what I ate and am thankful for the experience. But boy was it a test! Oh and if you are wondering – that last picture is duck tongue. 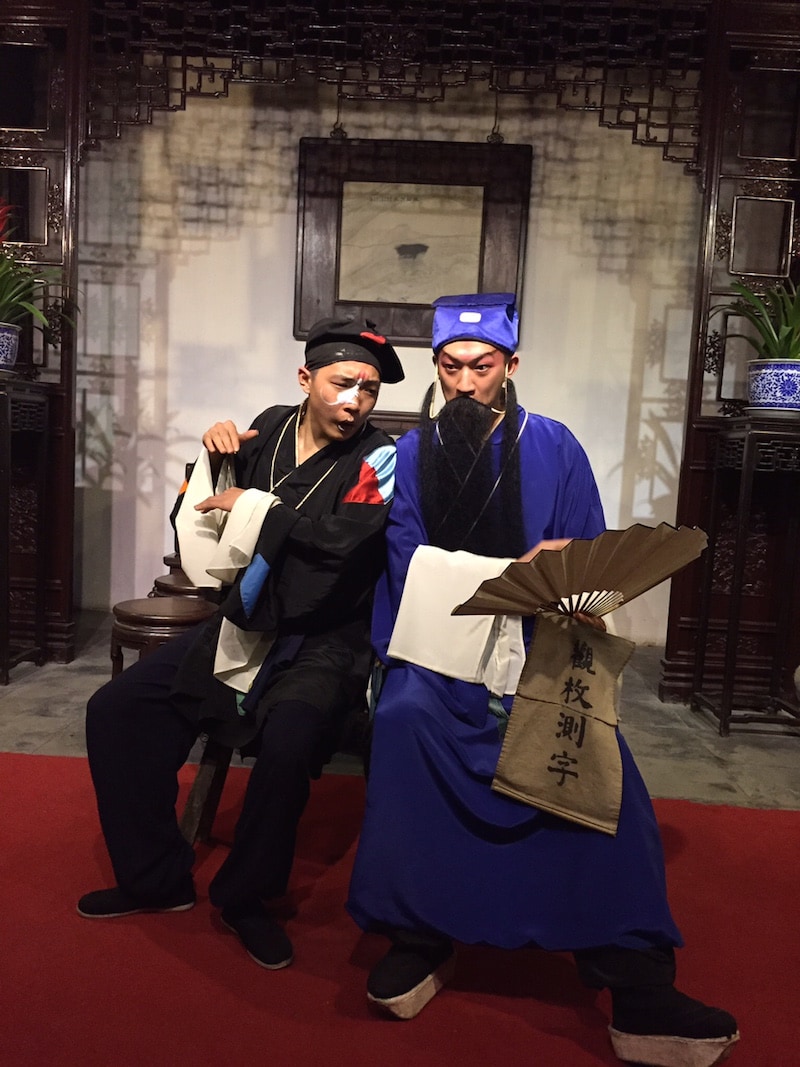 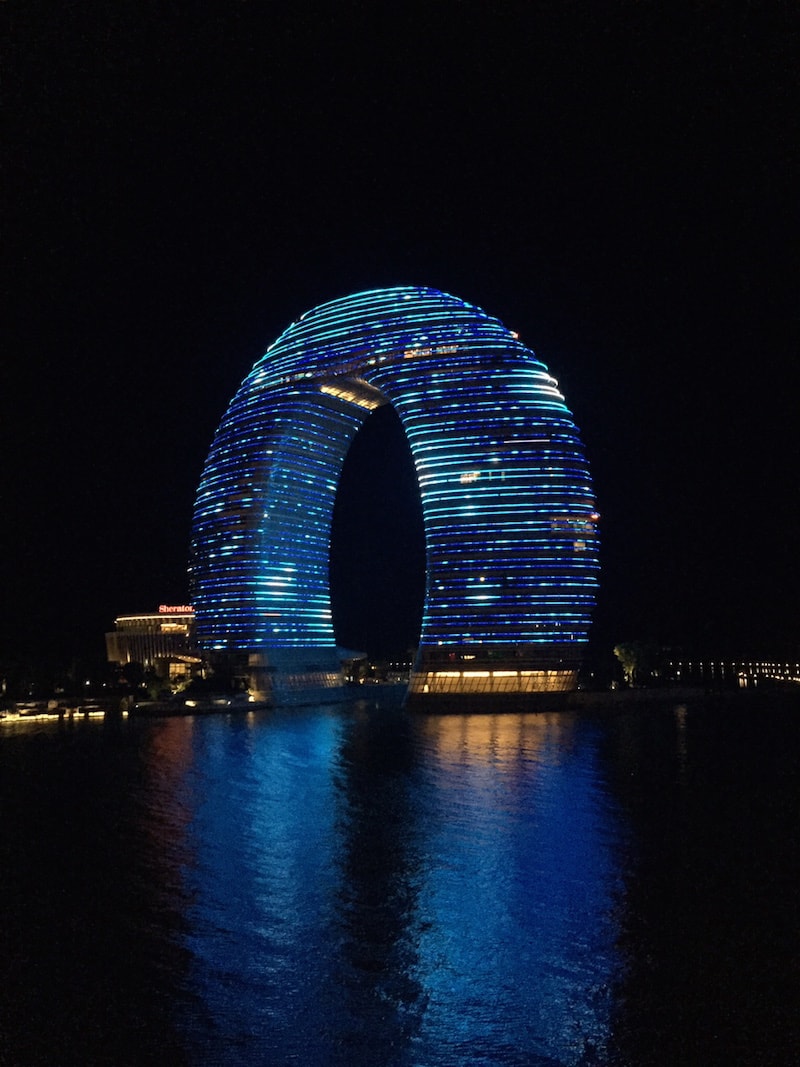 There were so many shows I saw that I would have NEVER seen because they were so far off the beaten path, a tourist would NEVER know about it. I recognize that and will hold those memories close to my heart. 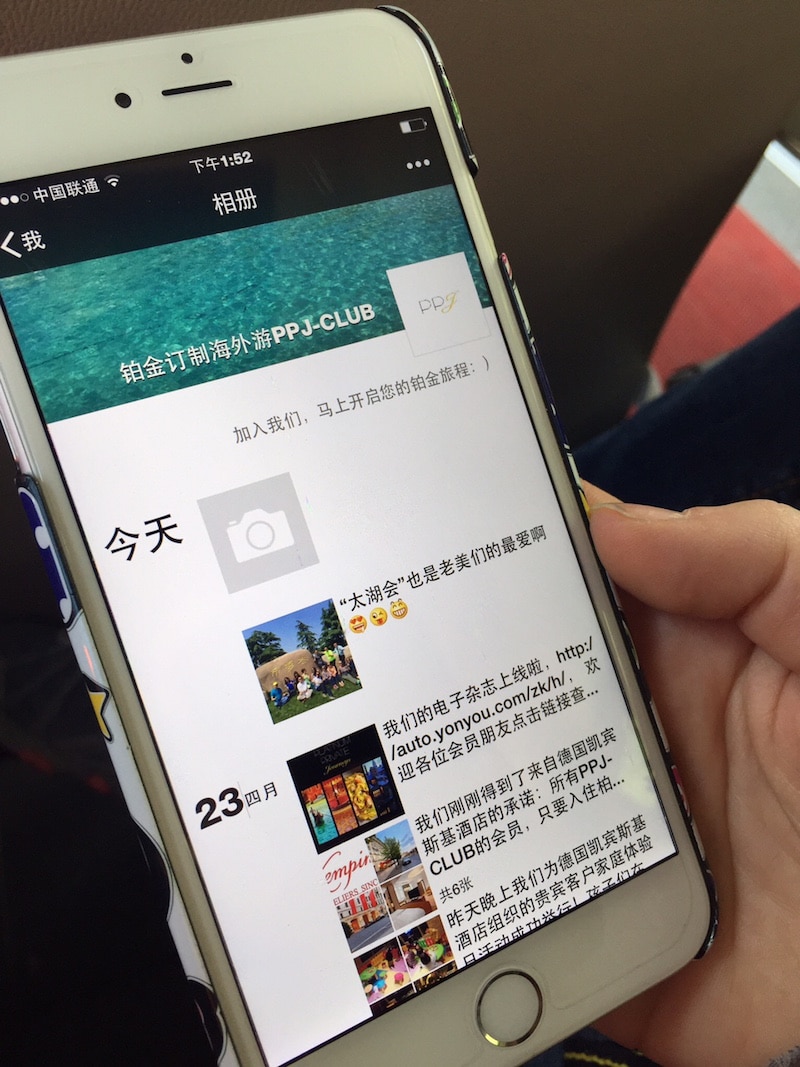 We Chat. I even got to check out China’s answer to social media. Since we became so friendly with our local friends, we made them teach us about what they use to stay connected. 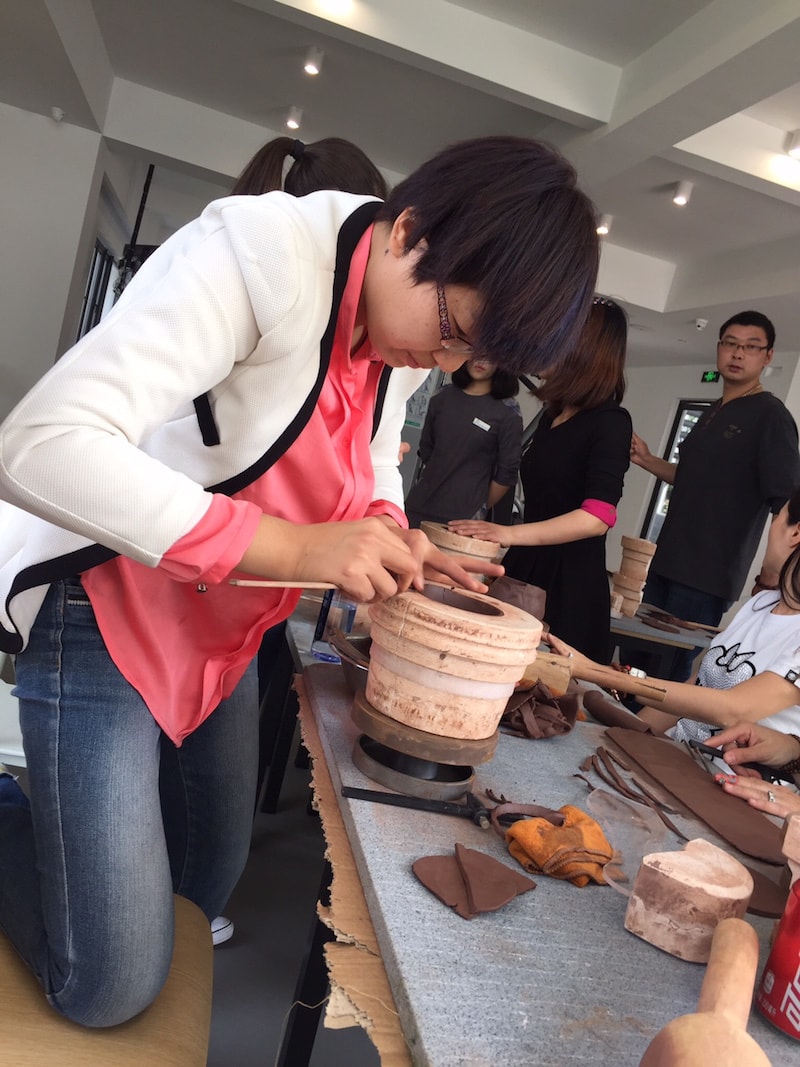 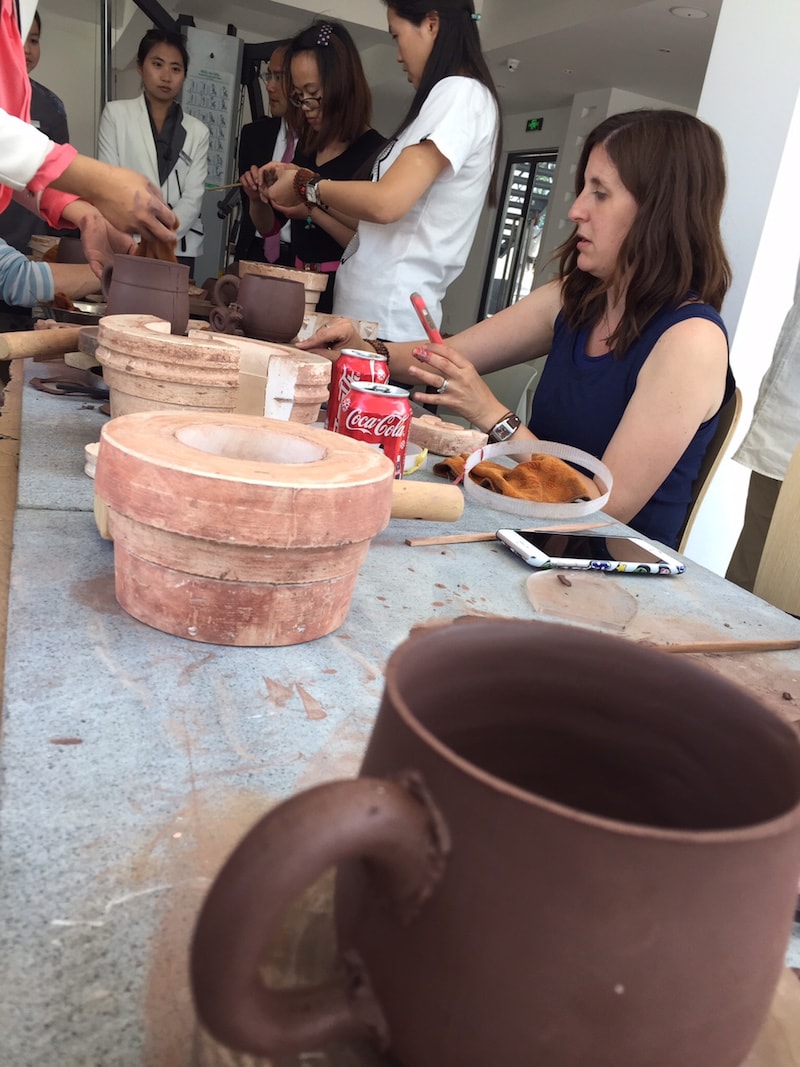 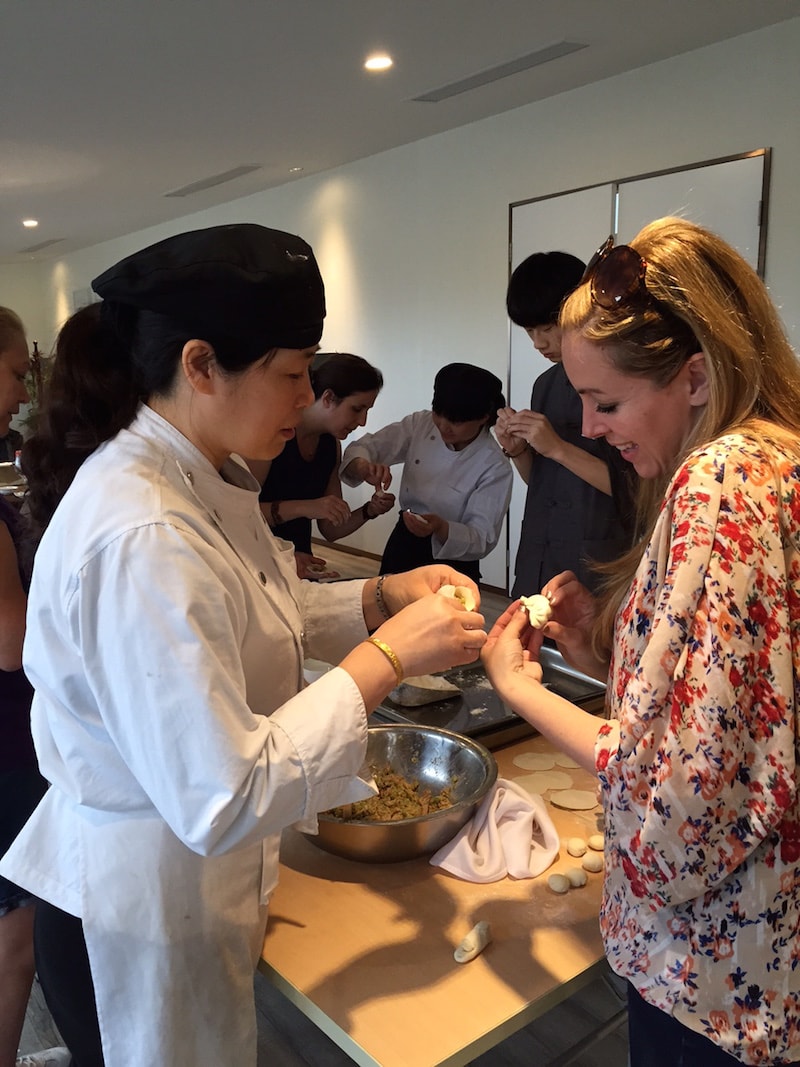 16. I got my hands dirty – literally. Whether it was cutting bonsai trees, making pottery or creating the dumplings we would eat later that night for dinner… this was a hands-on TOUR. I loved those experiences the MOST.

I have so much to share about this trip – for now, check out Mandarin Journey and see what they can offer YOU on YOUR next trip to Asia! And while being a tourist is EASY, being a traveler who wants to feel a cultural immersion experience is definitely worth the journey.