Have you ever wanted to know how to manifest your ideas into reality or whether or not the power of manifestation was real? It’s such a simple concept, but most still don’t believe in the strength in belief. 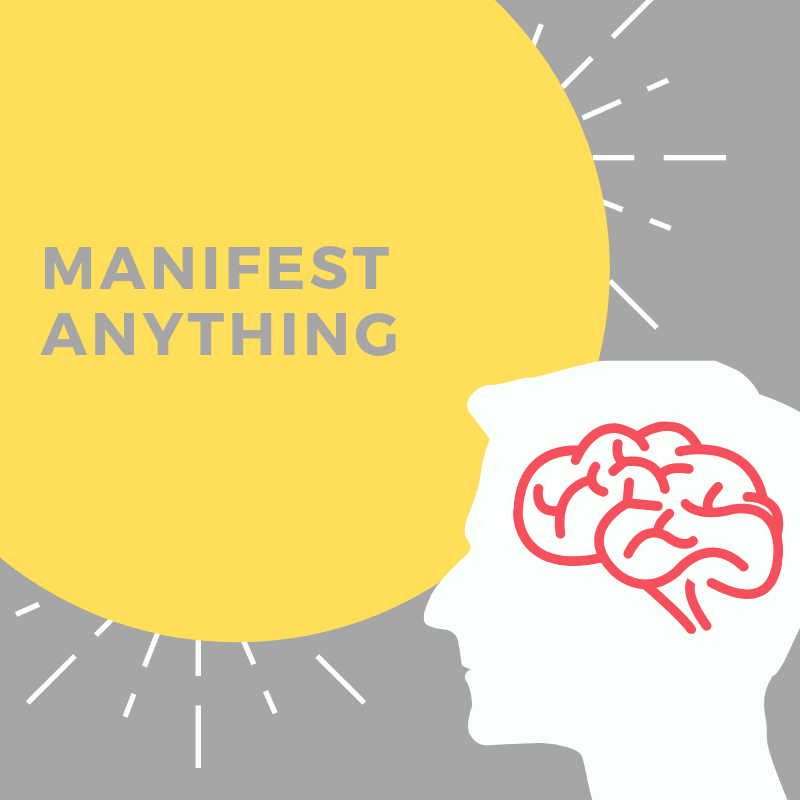 If you don’t believe in yourself, then who will?

This post was created from the transcript from my Permission to Hustle podcast. If you’d like to listen to what I have to say instead of reading it, click here to access our Apple iTunes podcast page. This article contains affiliate links. 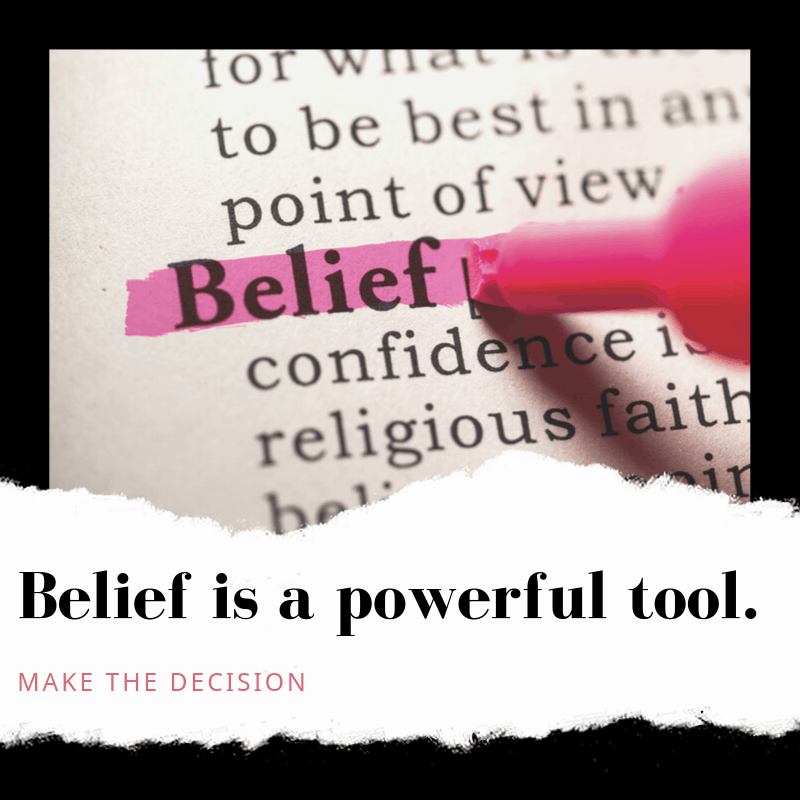 How To Manifest Your Ideas Into Reality – Power Of Manifestation

You might look at this train of thought and think, “Well, that’s kind of sad. It’s sad that I have to be my best advocate,” but it’s true.

Listen, you have people that love you in your life, and I am sure that you have a great support system. We all have our circles, our tribe, and our families. However,  you must remember that you are important in your own life. You matter! So, speak up for your own needs and be the champion that you need. 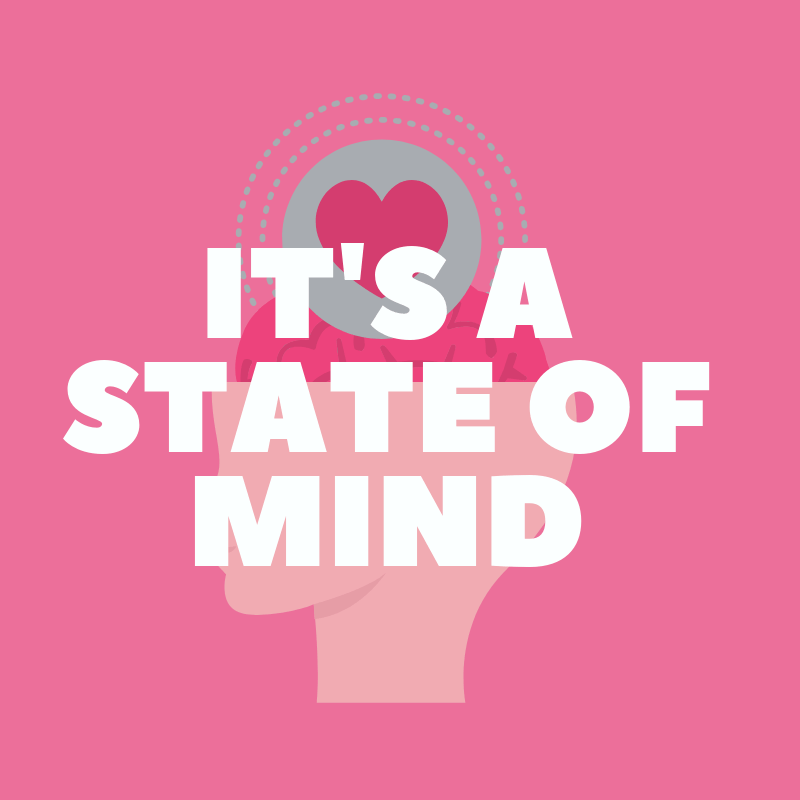 It all starts with a state of mind. I truly do believe that. I’m in a private business group on Facebook, and this weekend, somebody posted a little meme. It said, “I will be the first millionaire in my family.”

I can’t tell you how many likes it got. Maybe a thousand? People were writing comments like: 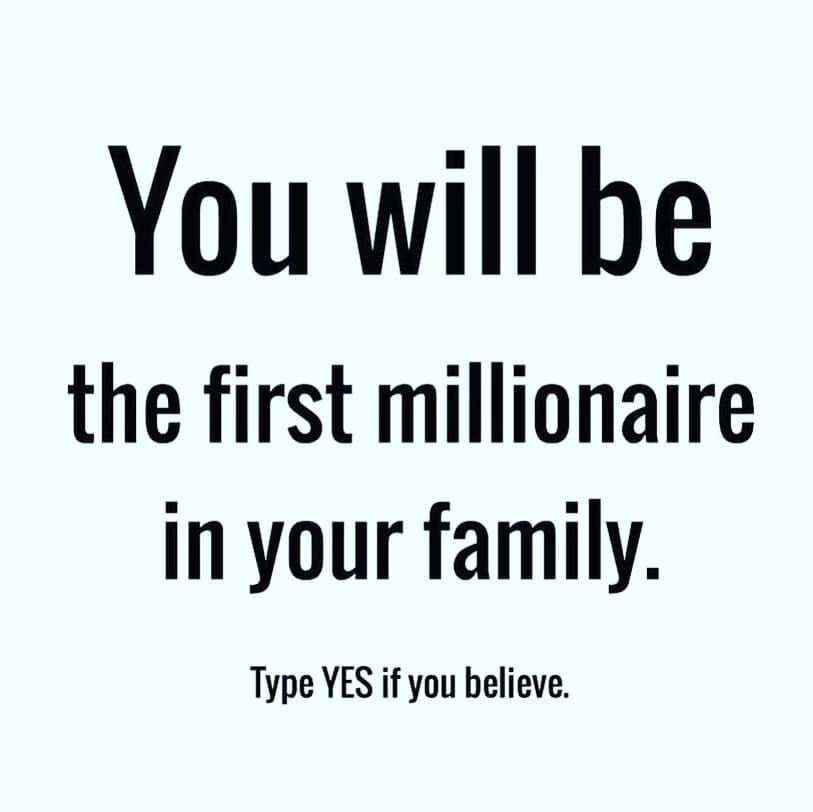 It made me smile. Clearly, I don’t come from a line of people that are millionaires. That is just not the case for me, personally. I just loved how she put that energy out there. She said, “Believe it. Believe this, and if it’s something that you believe in, then it will happen.”

Now, that’s not necessarily my personal goal. I don’t wake up in the morning saying, “I want to be a millionaire. This is my goal and dream. Money is why I’m pushing myself to the end limits.” So, I couldn’t exactly relate to the meme. But I respected the concept.

I took what she did and absorbed it. Her post has truly been resonating with me for quite some time and maybe in some way, it’s why I decided to speak this message today. 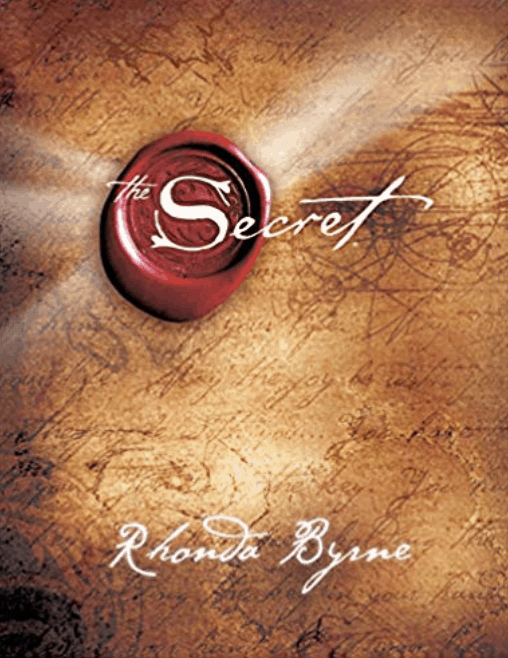 “I will be the first millionaire in my family. Say if you believe it.” That is the power of belief, the power of The Secret. If anybody has ever read, The Secret…it’s pretty much right there.

You just have to believe in whatever it is that you want, and it’s not “act as if,”  – because “acting as if” means something else.

The point is to believe in yourself, believe that you can succeed, you can do the things that you want to do. And if you wake up every morning knowing that you will achieve whatever it is that you want, then you’ll put yourself in the right state of mind, the right mood, the right attitude. 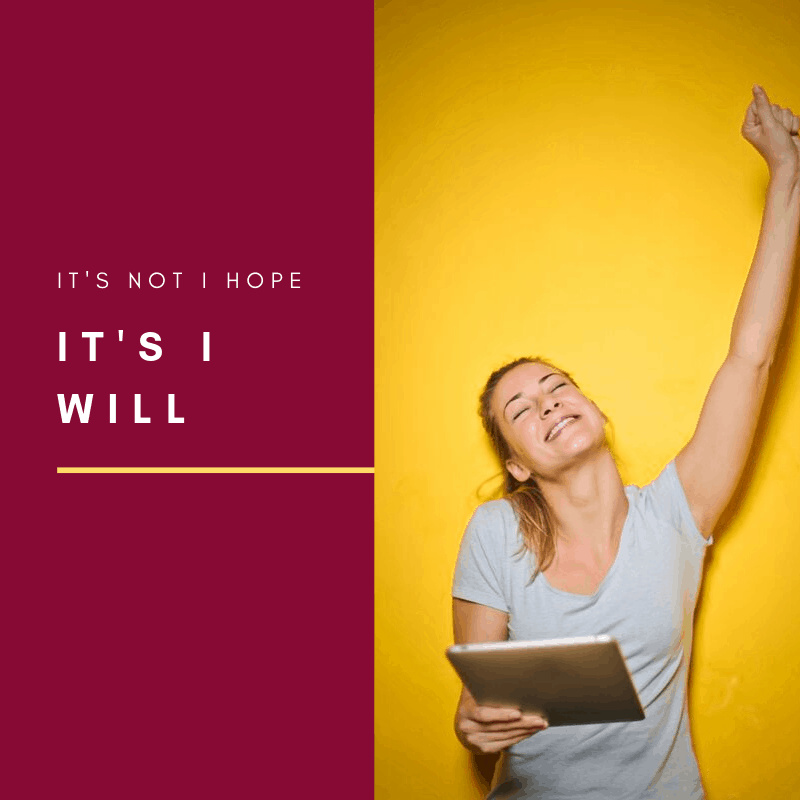 I will do these things.  I was watching a documentary about a couple of months ago. It was posted on Facebook, and it caught my interest. It was filmed about 40 years ago and was based on what people thought the world would look like in our time – 2019/2020. Their guesses were surprisingly accurate.

These were, by the way, highly intelligent Harvard students, Yale students. They didn’t go after the average Joe.

They were interviewing the smartest people that they could find for that given time period. They were going after people that were currently in very accredited colleges, master programs, et cetera, and they were asking them, “With your knowledge and with your intellect, what do you see from now? What do you think will happen to our world?”

But then they also went after some children, and one child – who was probably around 10 said, “I will be a neuroscientist by then.” WOW!

The way that he was talking about it, it was a fact. He was saying it as a matter of fact. It just absolutely blew my mind.

“By then, I will be a neuroscientist, and I will have helped create blah, blah, blah.” He was going on and on as if these things were known, these were already facts. They were going to happen. They just haven’t happened yet.

I was watching that child, and I said to myself, “My God, this kid gets it. He’s 10 years old, and he gets it.” Out of everything that came out of that program, me watching this child was my biggest takeaway. He knew it. He knew it.

He woke up every morning knowing it. “I will be this. I am this.” It wasn’t even “I will be.” He was already. He was already – in his mind – what he was set to be, and that attitude is what we all should wake up having. 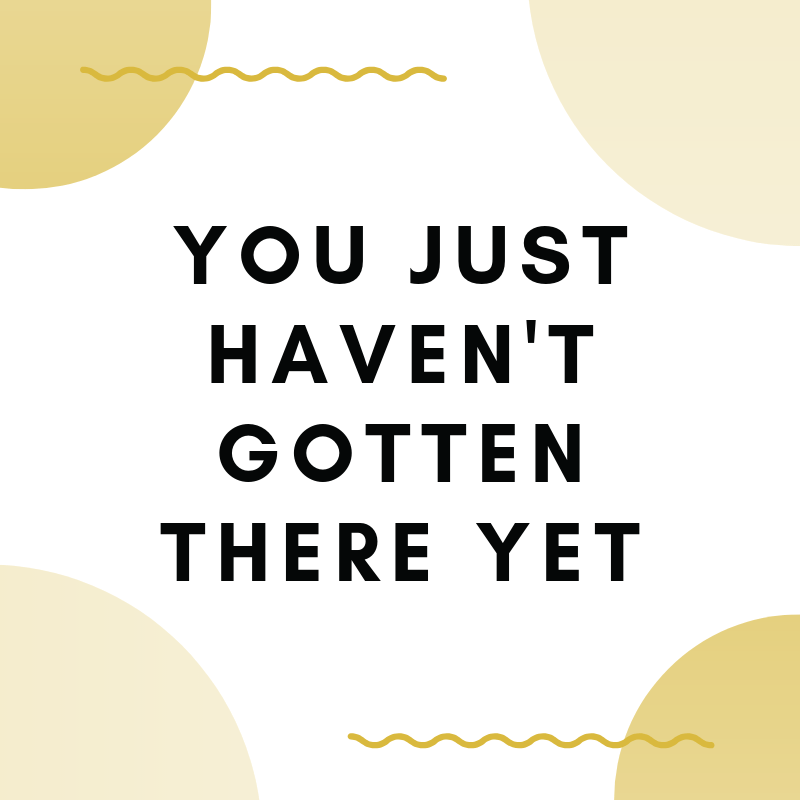 What is it you want to be? You are already this. You just haven’t gotten there yet. There are no boundaries. There are no blockades. There is nothing in your life that can stop you except for your own mindset.

It’s a struggle if you aren’t born this way. If you were not born with a drive. This mind-shift will be a true test for you. It will feel upstream at all times and I acknowledge this. But you must swim harder against negative thought.

You need to recognize that all it truly boils down to is a mindset change and the only person who has that choice is you. You have to make a decision and, believe me, it IS a decision. Once you do, everything will feel differently. This is the power of manifestation.

Start today –  believing in yourself, believing in what it is that you want to do, believing that it has already happened. It just hasn’t happened yet, but it has happened, and if you have that attitude, whatever it is will be. 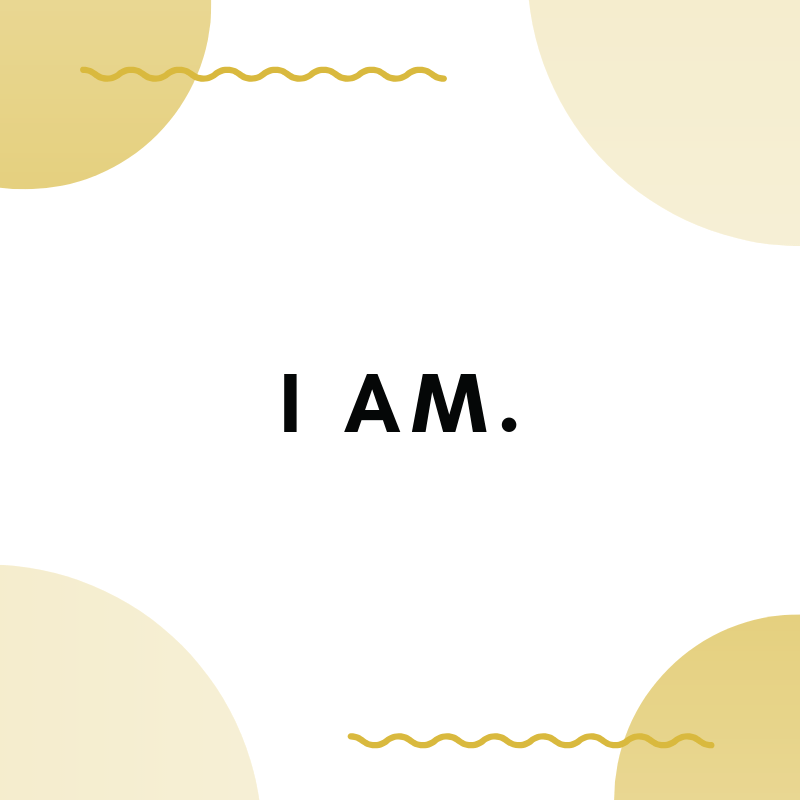 I will be on TV. I will write that book. I will have a million page views. I will open up that company. I will get on stage for the first time and speak my story and tell my truth. I will start that product line. I will launch that jewelry brand.

I don’t know what it is that you want to do, but it’s already happened. You just have not gotten there yet. You just have to believe that story, and just start today. Start telling yourself positive affirmations starting today, and let’s see how that mind-shift can help your business.

Do you believe in the power of manifestation? What is it that you would like to change in your life? 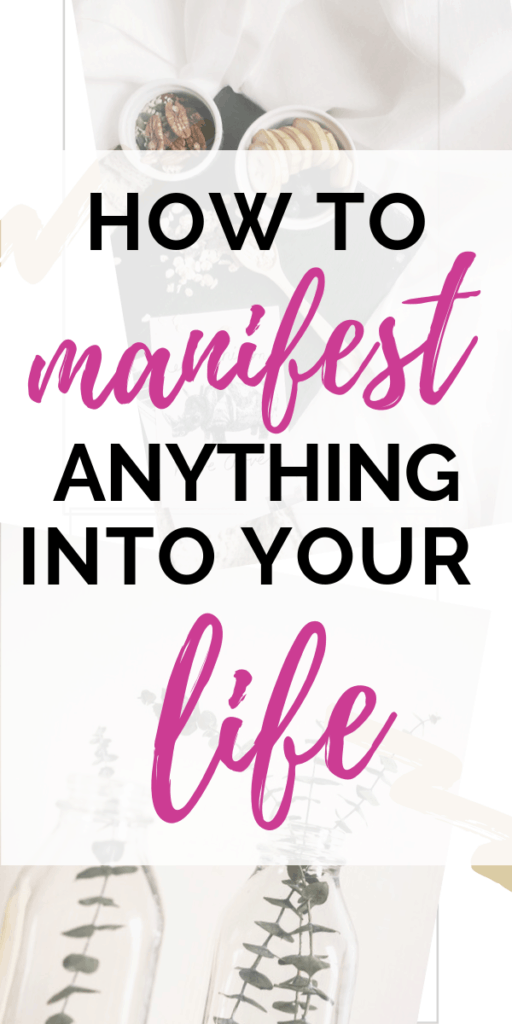