Remember a few months ago when I posted about the troubles I was having with my wedding rings? Well, that’s no longer an issue because the darn things have been permanently damaged. 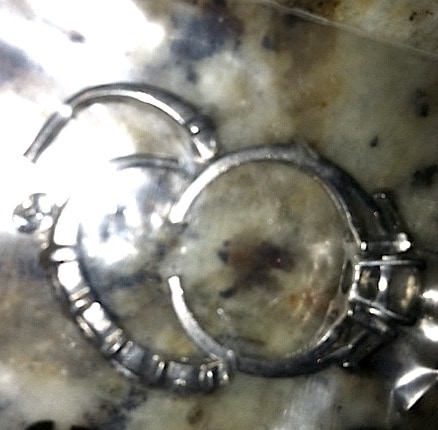 On Friday, I went out with my friends to celebrate a birthday. I was a little cold and my fingers shrink when that happens. It’s freaky but it’s true. I can go down almost half a size during the winter, so this really wasn’t too surprising to me. My wedding rings became VERY loose on my left hand so to be safe I swapped them to my right hand. I’ve done this a million times before and it has always worked.

I got home pretty late. Forgot to switch the rings back before I went to sleep. Woke up and found my right ring finger red and swollen. My hands went back to their normal size and the rings were at least 1 full ring size too small.

Immediately I went online and did EVERYTHING I read. Olive Oil. Submerge in ice water. Windex (what? Windex – I did it anyway). String. WHATEVER. I did it all. After about three hours I had really irritated that finger and it doubled in size and was starting to really hurt. I was also bleeding because my ring was scratching into my skin.

I called the fire department (another thing I read online) and my town’s department said they wouldn’t help me and that I had to go to the hospital. WHAT? UGH! So, off I went to the emergency room.

Once there they tried to do the same things I did and of COURSE it didn’t work because at this point the bottom of my finger was hanging over and around the band. It was BAD. They said they had to cut them off.

But not only did they cut them – but they ripped one in half. I almost died.

It is what it is. I unfortunately had to do it. But I just can’t believe this all happened. I told Bill that I wanted to get the rings reset in white gold and not platinum because it’s a stronger metal and will keep its shape better than the platinum. My rings were oval to begin with which I am sure contributed to this issue.

Now, I’m joking with my husband that it’s time for an upgrade… but he doesn’t find me funny. LOL!