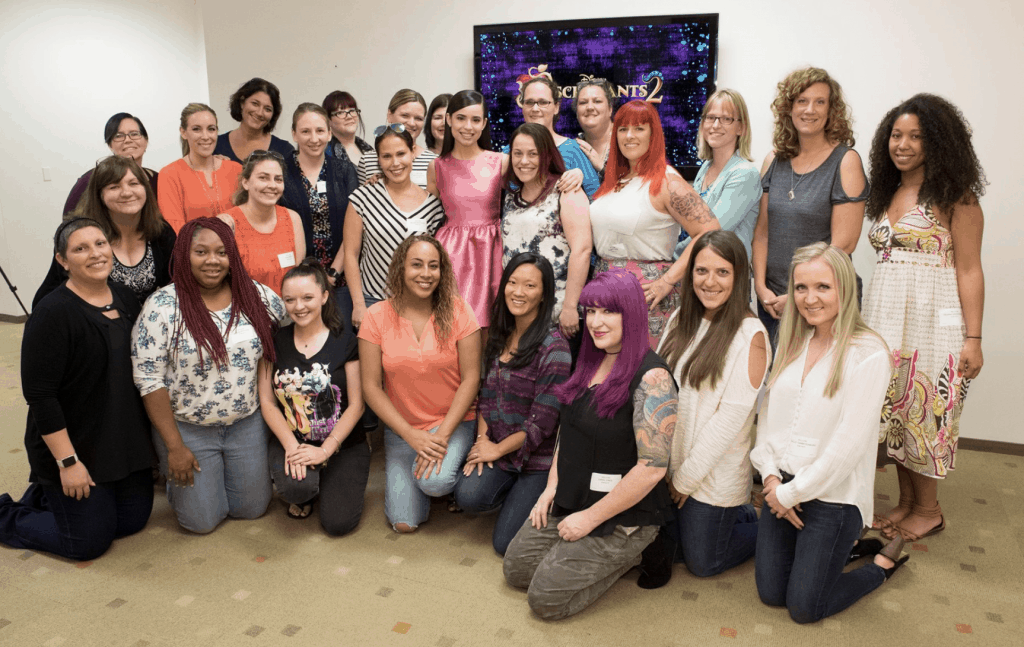 The TV movie will hit the airwaves on FRIDAY, JULY 21 (8:00 p.m. ET/PT) on five networks – Disney Channel, ABC, Freeform, Disney XD and Lifetime! You will not want to miss this one. It’s going to be great.

In fact, my daughter is planning a sleepover with her friends because they all cannot wait to see what happens to their favorite Disney characters in the sequel. 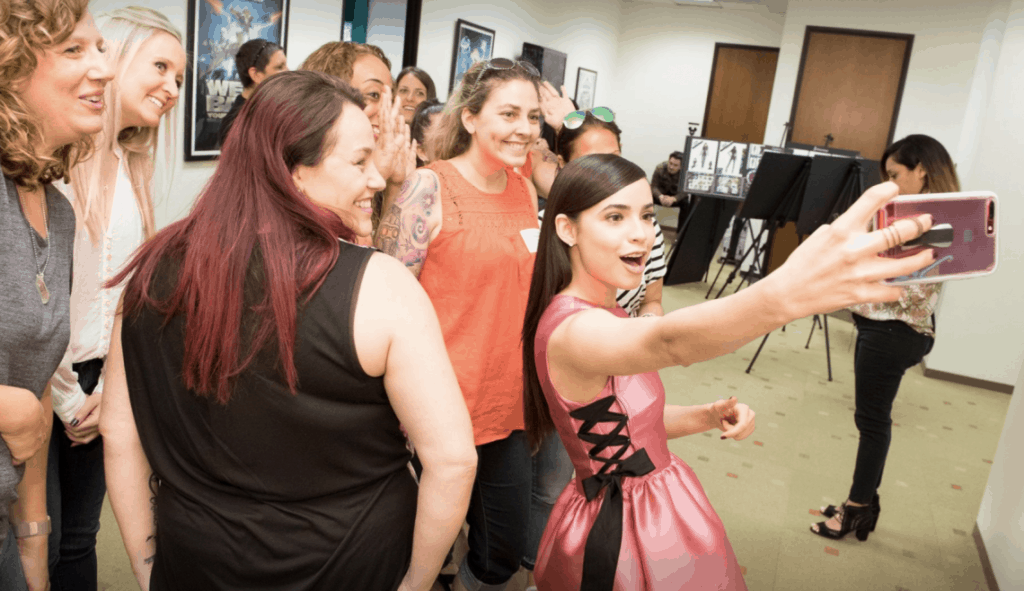 A few months ago, I had the chance to interview the Descendants 2 Cast and I can finally release some of their quotes. YAHOO! I have pages and pages of script, so I thought that I’d pull out some of my favorite pieces to give you a few tasty highlights to get you ready for the main event.

I will say – every single one of these young actors were simply wonderful. They were all so professional and caring and attentive and polished. True artists! I understand why my kids love the Descendants 2 Cast so much!

The Best Quotes from The Descendants 2 Cast

Without further ado, here are some of the best quotes from my Descendants 2 cast interviews: 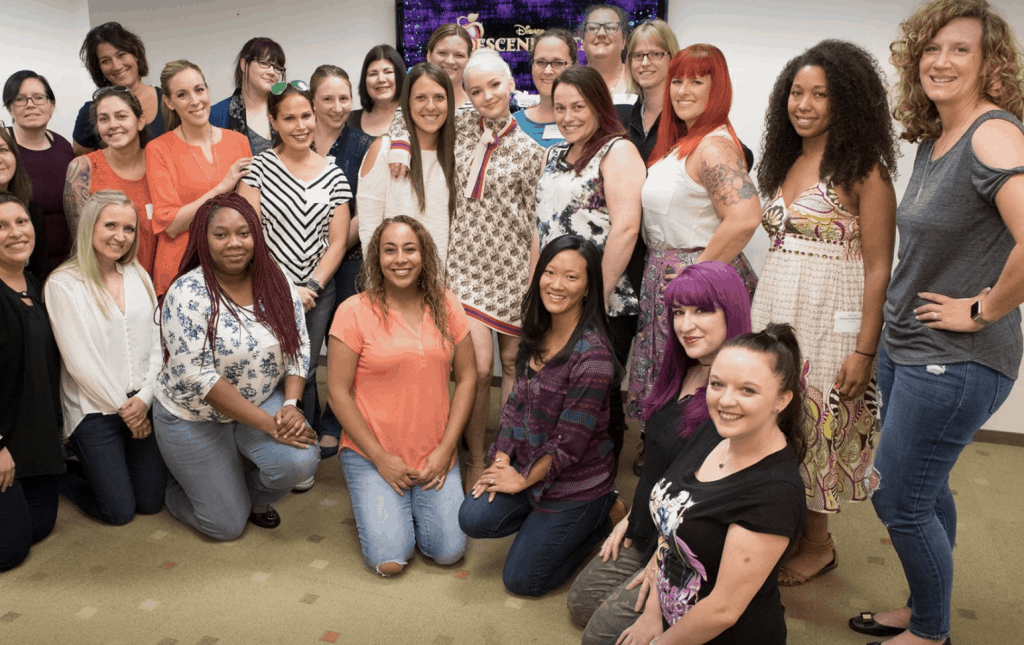 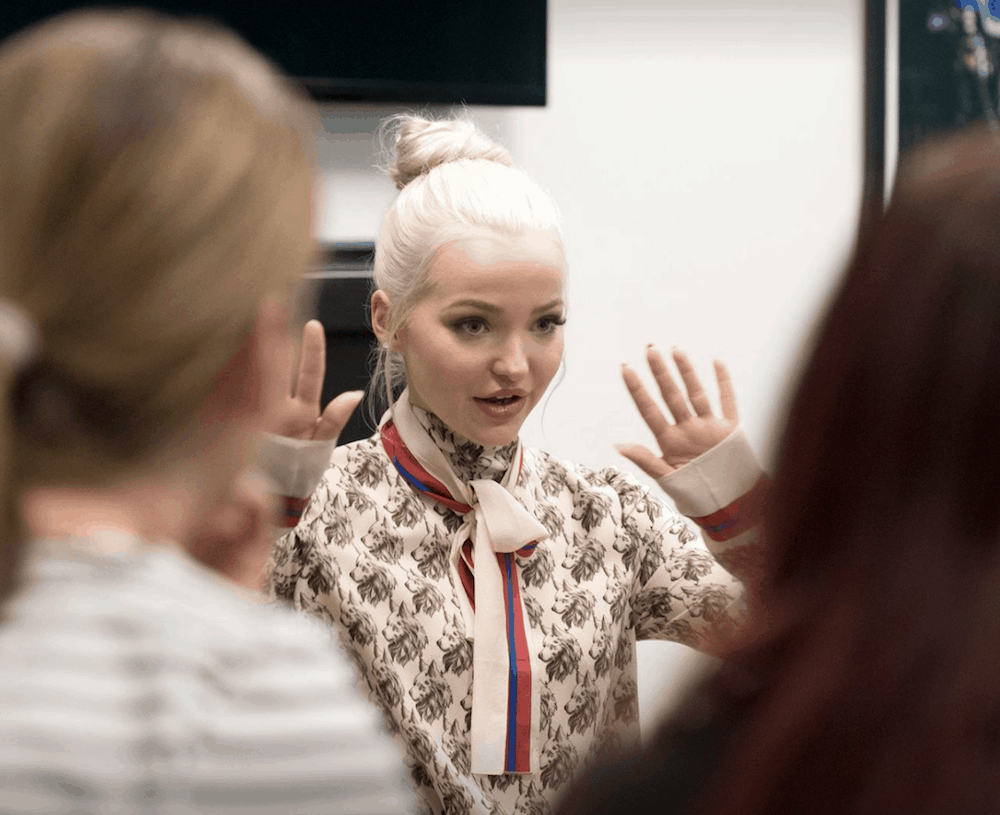 Q: You talked about your Descendants 2 Cast character changing and experiencing different things. We all deal with changes in our everyday lives. Did anything from your personal life help you with the stuff that Mal was going through in finding herself?

As an actor, I do that as much as I can in every role, but Mal is my ride or die. I fell in love with her when I read the “Descendants” script back in 2013. The Disney Channel didn’t tell me anything.

They didn’t say, “We’re going to set up an audition.” It was more like, “Will you read this and tell us what you think?”

I had an emotional, visceral response. I said, “She’s my girl!” because I related to her so much. Even though all of the characters and Mal are in fantastical circumstances, their experiences are very relatable. A lot of people – a lot of kids and a lot of adults who were once kids – don’t always have an easy home situation. They don’t always have all the support that they deserve.

I think all of us in this room can relate to feeling like we lacked something there that we now have to deal with as we’ve gotten older. That was something that I had such a lovely time with, for myself psychologically and also as an actor, to inject pain into an experience that we [all share].

This is a movie for children, and so we have to ride that line between [communicating] really helpful and relatable messages, but still keeping it light. That was challenging and interesting for me, and I did bring a lot of things I felt like I lacked from my own childhood.

It definitely helped keep Mal real. It also helped me as a human to explore somebody else’s issues, and to fix my own at the same time. 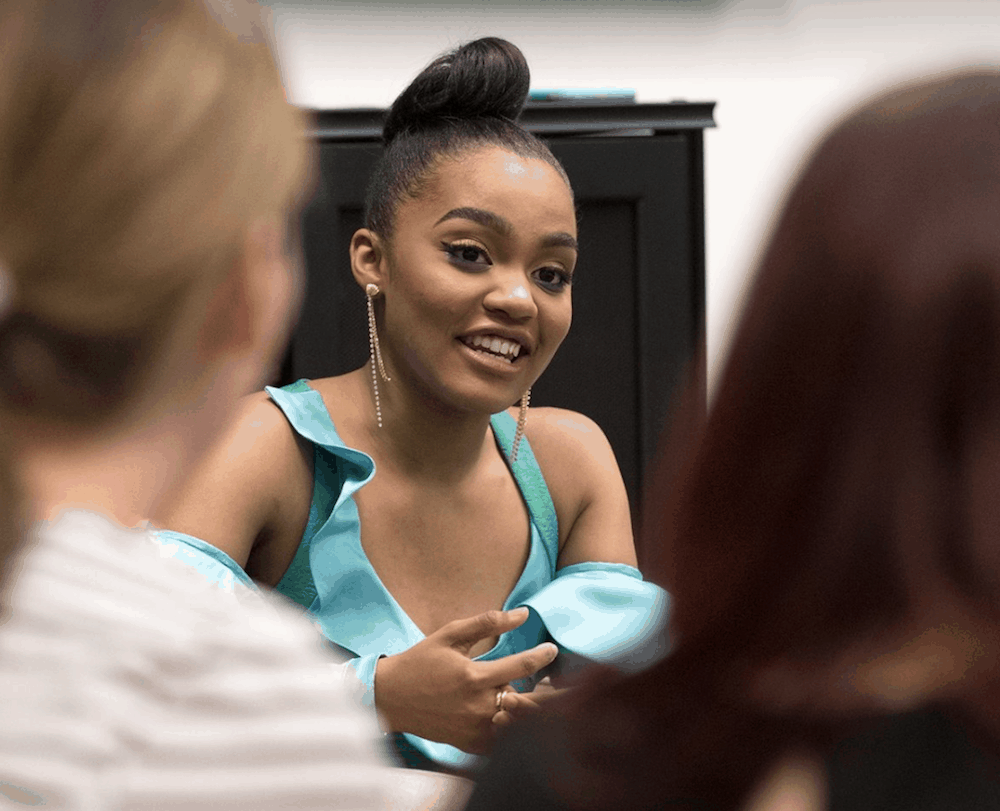 I’ve known Cameron Boyce, fun fact, since he was nine. We’re always picking on each other and playing pranks on each other. He and Booboo Stewart have the coolest relationship ever.

They’re really close, and a lot of the original cast and the new cast got close so quickly. It was like there was no difference [between us]. It felt like we’d worked on the first film, too. That’s how comfortable they made us feel.  So that was really cool. 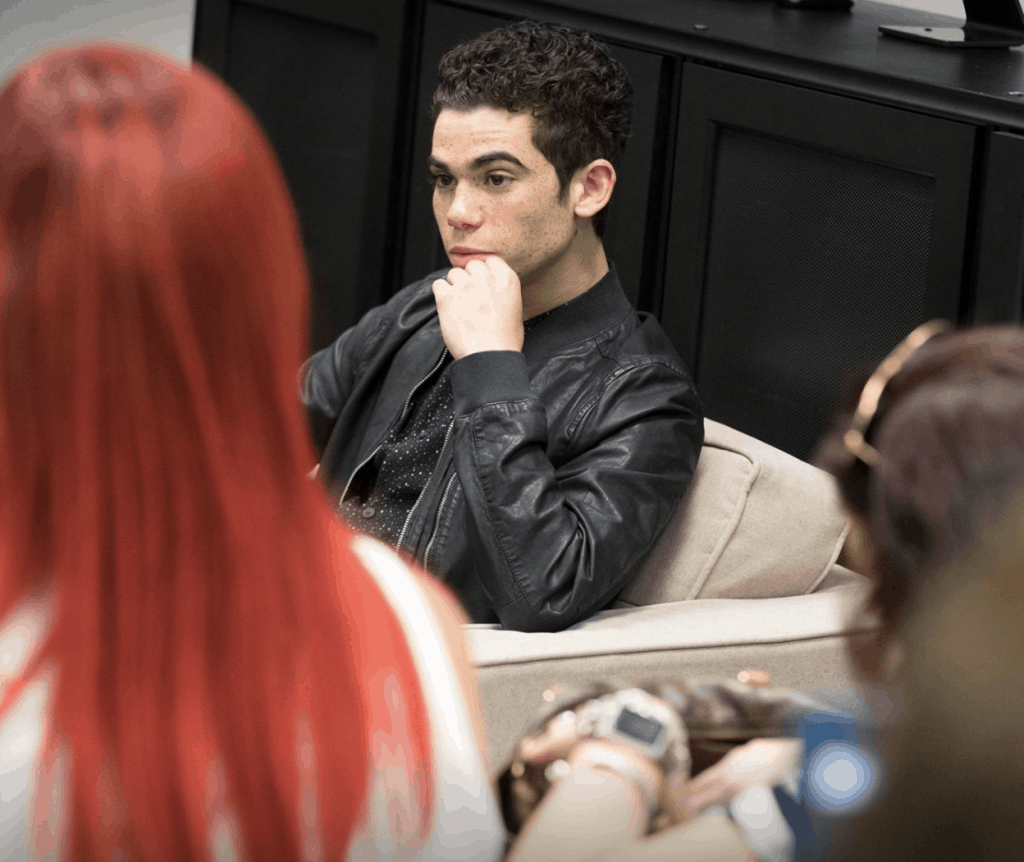 Cameron Boyce Talks About His Character:

Q: What kind of issues is Carlos facing in this film that children can relate to?

CAMERON: There are a lot honestly. There are a lot of different morals in the story in the first movie too. Specifically for Carlos, I think one of the main things that we focus on in this franchise is self-worth and really making sure that you feel like you belong, whether you actually do or not, because everyone belongs but maybe you don’t feel that way. Maybe the physical, or whatever it is, is different.

Carlos is the youngest and I don’t want to say the weirdest, but he is afraid of little dogs and there are some things about him that are [different]. But he definitely finds himself in the second movie and he goes through regular kid things.

He goes through girl troubles. He figures all that stuff out eventually and he reaches out for help, which is important. He’s a little bit lost and flustered and confused and has feelings that he has never had before. Instead of keeping it to himself, he’ll say, “Jay, how I do this?” or “Mal, help me out a little.”

I feel like that’s important to have a dialogue with people that you care about. 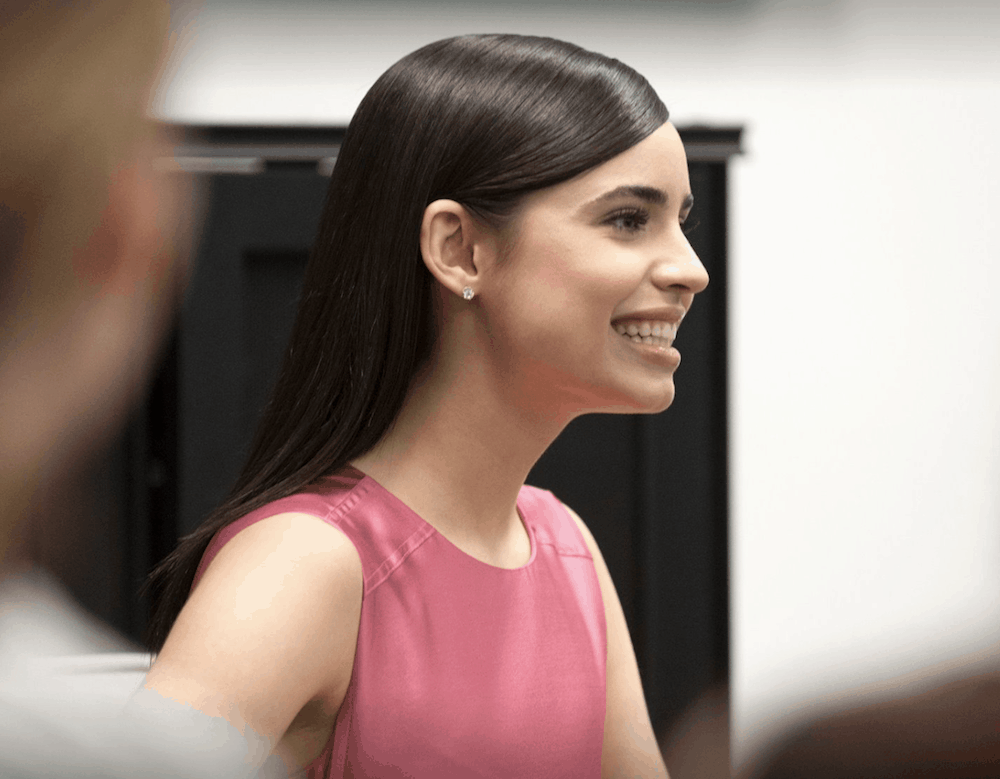 Sofia Carson – All About Evie:

Q: What is it like for you when you see fans wearing Evie-inspired costumes?

SOFIA : There is no feeling in the world that compares to it. I’ve been lucky enough to travel the world with this film and to do press for it. No matter what country I go to, what city I go to, there’s a little girl dressed up as Evie.

Whether she’s speaking Spanish or French or Portuguese, it’s so impacting to see how far this movie has traveled and how many lives, how many little girls it can impact. I’ve had a really beautiful experience.

I like to go to the Children’s Hospital as much as I can. [My sister and] I went [to the hospital] for Halloween and I was dressed as Evie. I met a young girl was suffering from sickle cell anemia and she spoke to me about Evie in ways that I never even knew and in dimensions that I had never even [considered.]

Hearing what Evie taught her and how she felt connected to Evie was the most incredible experience and I think this is why we’re so lucky to do what we do.

Yes, I get to dress up every day and sing and dance, but to be able to tell stories and have them impact young girls like that, that’s why I feel so lucky to do what I do.

The Descendants 2 is Almost Here

Be sure to tune into The Descendants 2 on FRIDAY, JULY 21 (8:00 p.m. ET/PT). You will be able to find it on five networks – Disney Channel, ABC, Freeform, Disney XD and Lifetime!

In case you need a refresher, here is the trailer –>