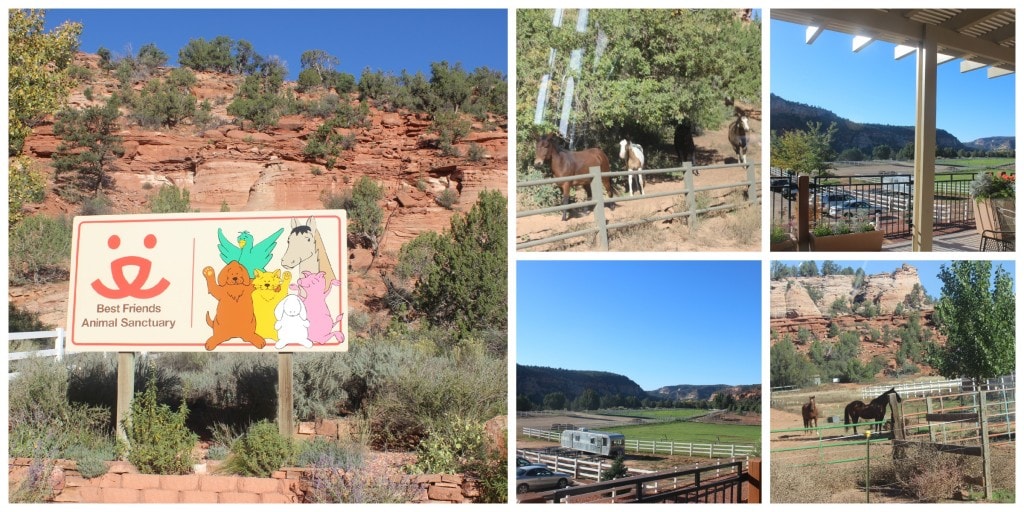 The Best Friends Animal Society is located in Kanab, Utah. Nestled in the mountains, Best Friends was started in 1984 by 18 good friends who wanted to make a difference and save the lives of domesticated animals across the country. 30 years later, 12 of these co-founders still play a very active role in the organization, lobbying for animal rights on a nationwide level and engaging with the animals. They lobby for a No Kill approach to shelters. This means that healthy animals are not killed for space at shelters but are found permanent homes within the community. Lady and the Blog was invited to check out all Best Friends has to offer. I got a chance to volunteer with the animals, tour the property and chat with the co-founders to find out what the 5 year plan is. It’s not like Best Friends is in need of additional direction. Their path is crystal clear. In the last 30 years, they have expanded to include between 1,500 to 1,700 animals in Utah, they have held workshops and guided other sanctuaries to save countless animal lives and they have grown to include about 600 employees who help run this vast endeavor. Here’s how I spent my first day at the sanctuary. 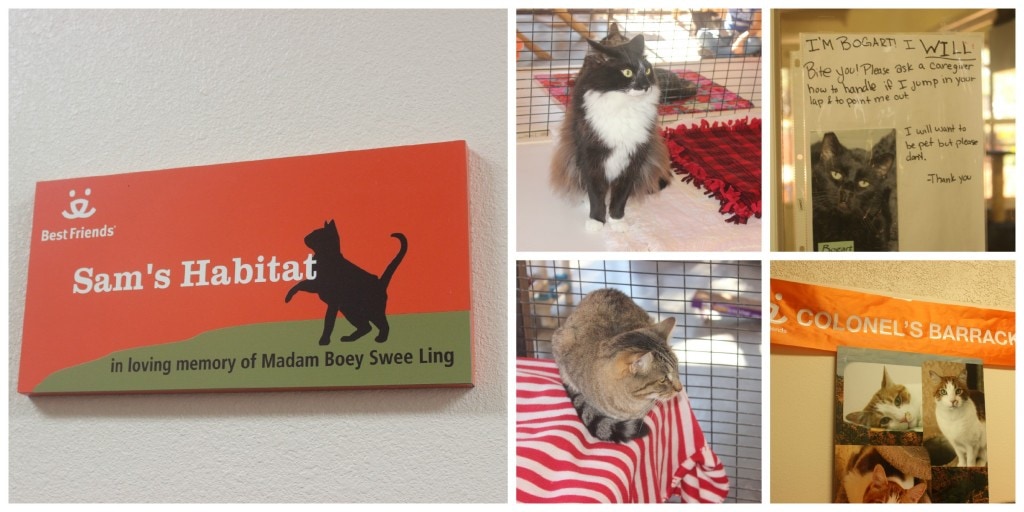 Our first stop was Cat World. Last year, 318 cats were adopted from Cat World. Currently 567 cats live there. Each animal species has their own section in the sanctuary. The cat section was a fun set up that included everything that a cat could want. Shy cats lived in rafters and the staff left bowls of food where they could reach. The staff told us their personal stories. Some were awful. The cats that were adopted were remembered through their pictures on the wall. Animals that come to Best Friends are always a part of the family. If a cat owner decides they can longer live with the pet, they can always bring them back to Best Friends and they have a home there, always. The cats were super adorable. Some were friendly, some cautious. All were so so cute. We learned about the program, Community Cats. It is a program that’s currently in 6 cities. Best Friends and their partners work with the local communities who take care of cats as a group. They take the cats in to the shelters, spade or neuter them, vaccinate them and make sure they’re in a good health. Once they are, they are then released back into their communities which they’re most comfortable. The belief is that these communities take good care of these cats and these cats are acclimated to the community. Best Friends connects the different people that take care of the cat separately to ensure the cat is getting proper care. They try to ensure the cat has a system in place instead of taking them out of their element. 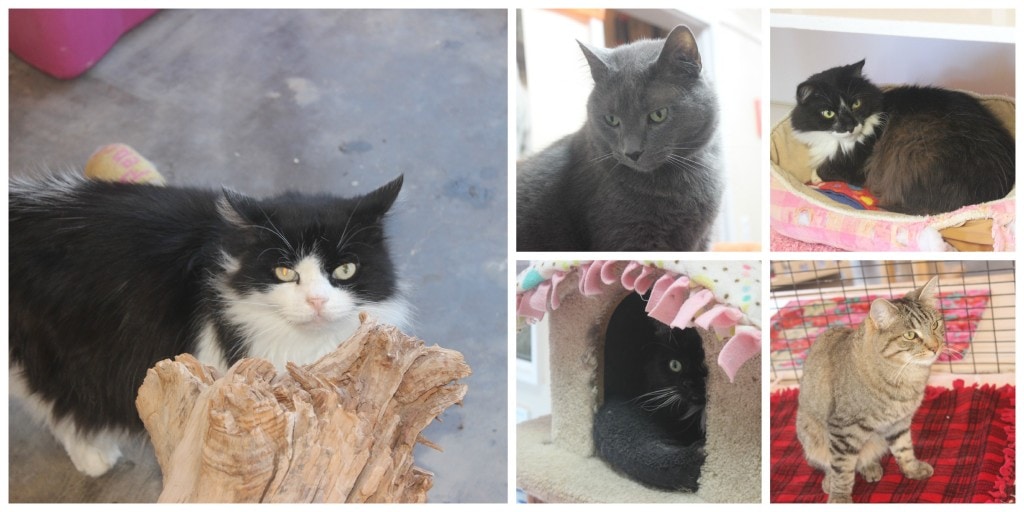 The next stop was Dogtown and Dogtown Heights. At the end of 2013, there were 350 dogs living there. 566 dogs were adopted during 2013 from Best Friends. These dogs ate 123, 604 pounds of dog food in 2013. We were introduced to the dogs that lived there and were told some of their stories. Some dogs were abandoned and some came to the sanctuary bruised and in pain. They were nursed back to health and given a home until they were adopted. The staff told us about the socialization process. Most of the dogs were super excited to see us, jumping all over each other to get their heads petted. Some were cautious. We were introduced to one that was. He stuck close to the staff and regarded us with suspicion. We were told that dogs need to socialized to humans and other dogs within the first year of their lives. They need to be taught how to interact with others and how to ask for what they want. If a dog is kept in a puppy mill or not taught these skills early on, it’s harder to teach them later on. This dog didn’t receive this interaction early on. The staff work with him on strategically increasing his socialization. They keep a file on each animal and make notes of everything so that progress can be observed. Next, we were introduced to a group of 4 dogs who were just the opposite. They bounded into the room and ran to us to play. They begged for attention and scampered all over us. These animals were puppies that grew up together and were currently going through the socialization process. They were fearless and ready for adoption. 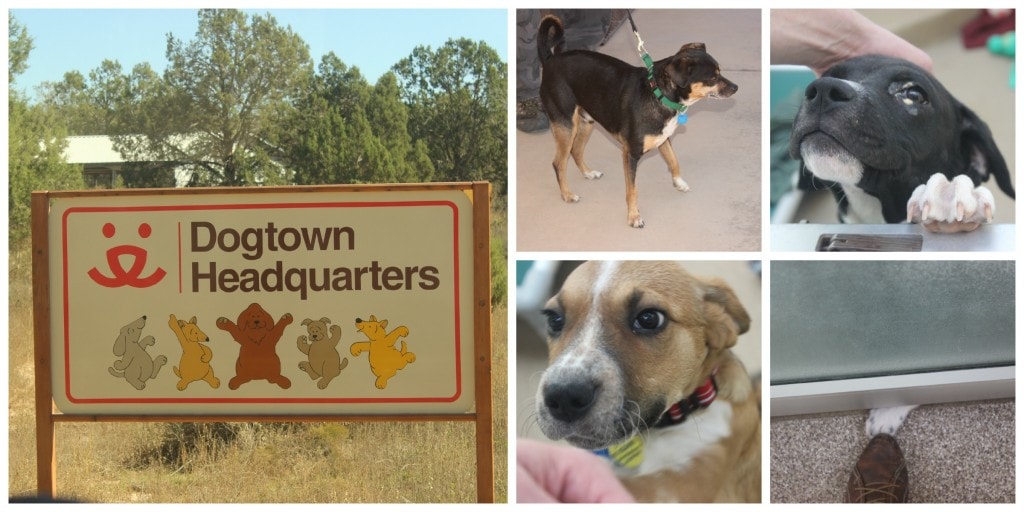 The dogs also have a fun play area to hang out in. They can run freely outside of their cages in this area. The dogs that are new to the sanctuary are kept separate from the rest of the dogs so that they can be observed for any illness. It’s important to keep the dogs in the sanctuary healthy and illness-free. The staff that interact with these dogs wear scrubs and take special precautions like cleaning their boots after each wear. As visitors, we wore blue disposable booties inside the play area so as not to contaminate the play area for the dogs. 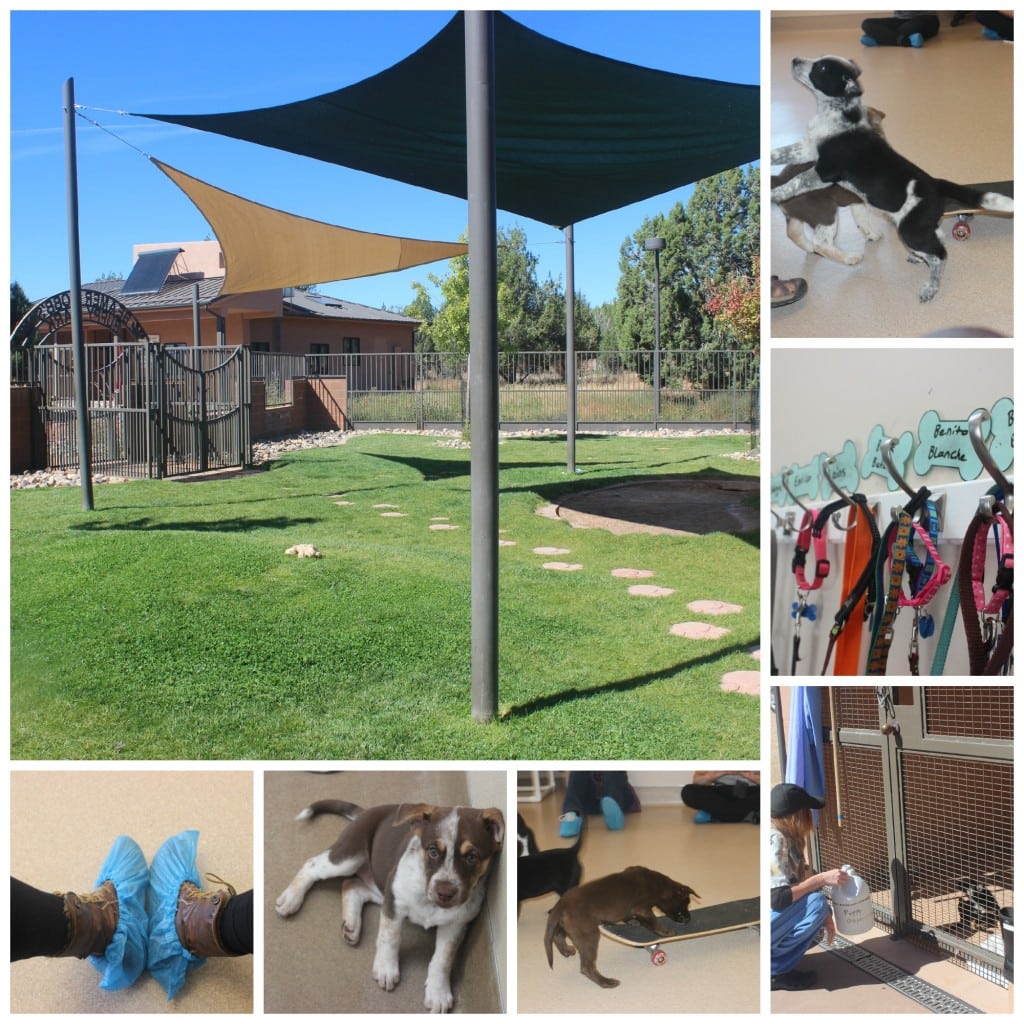 We then had the pleasure of visiting the goats. Billy, the one with the horns, was super friendly, nestling his head in everyone’s bodies. He was so adorable! 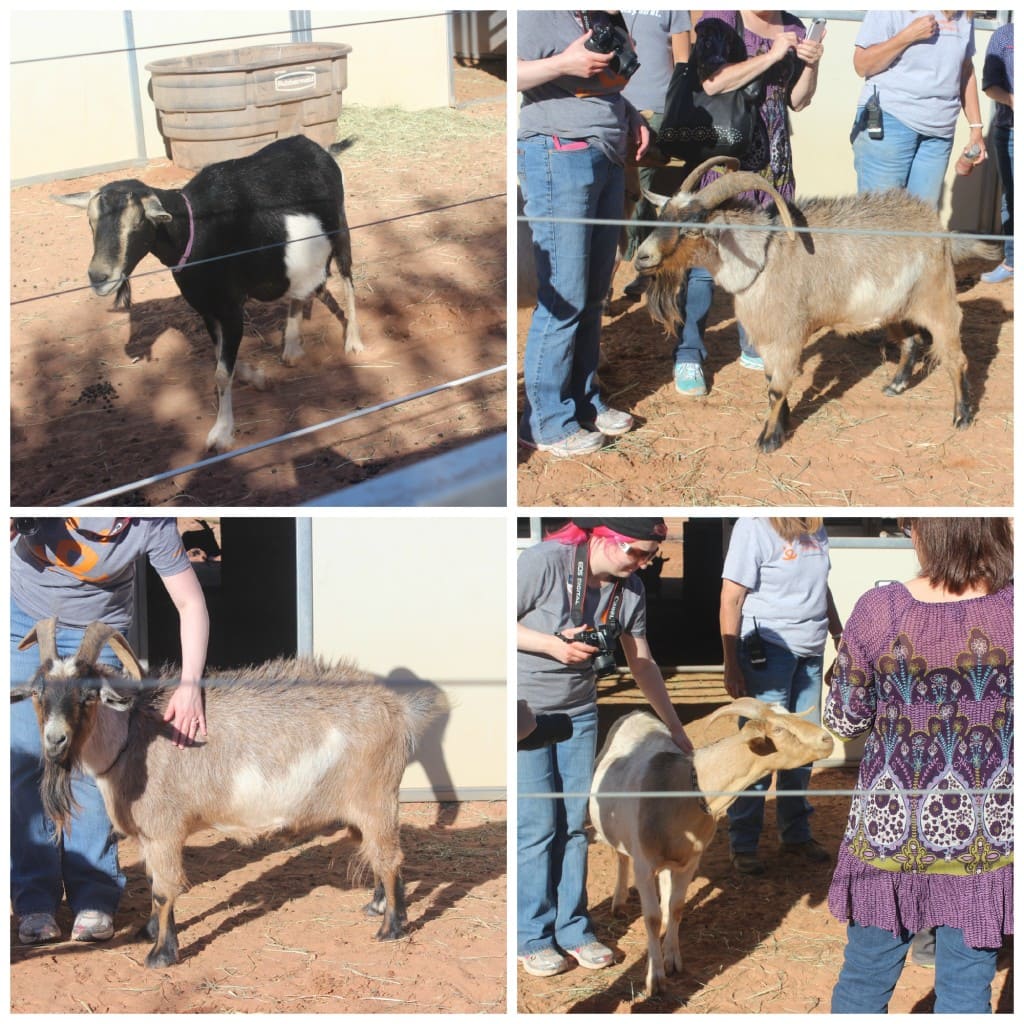 Next up were the pigs. Pigs are some of the most intelligent animals around. They are capable of being house pets with the right family. They love space to roam around but also love a good cuddle. One of the pigs plopped on his side when we started to pet him. He was just loving it! 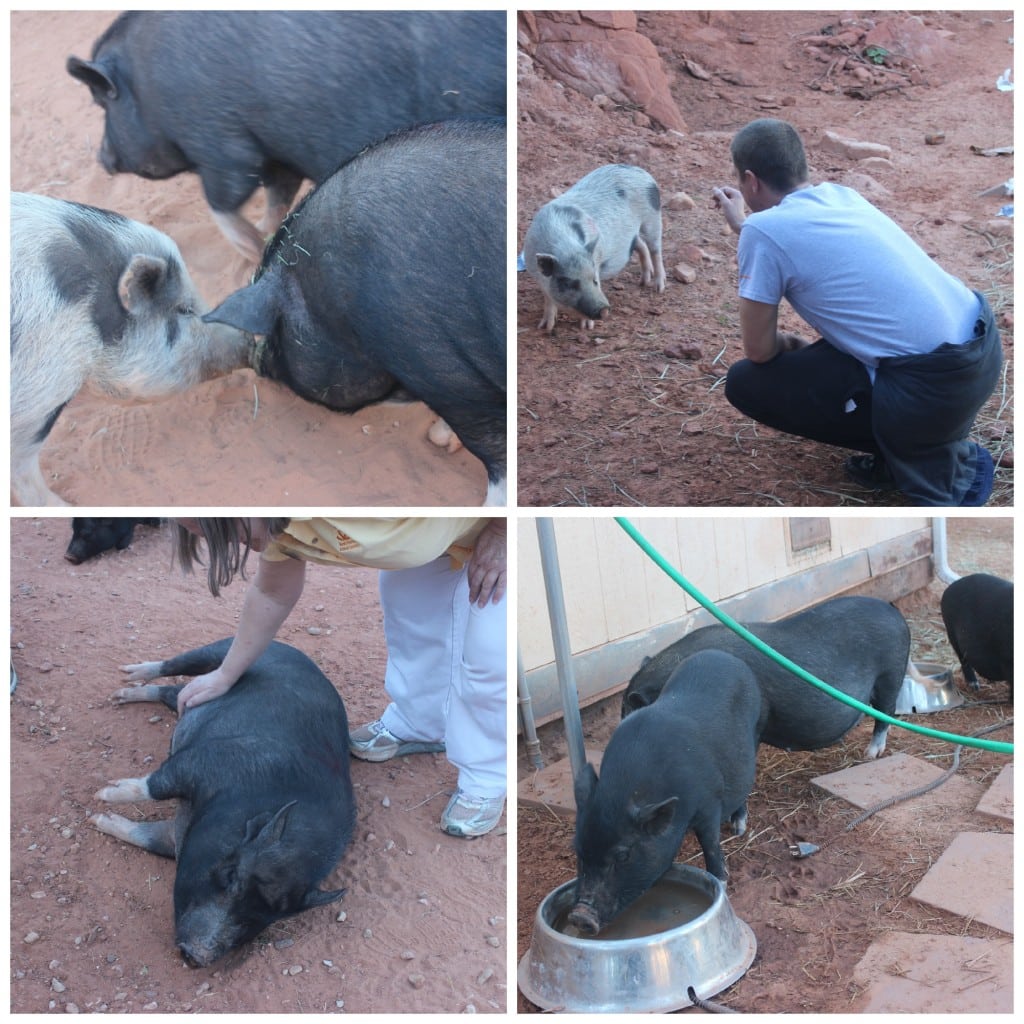 Adam and I volunteered at the Bunny House. This meant so much to me because I lost my bunny about 2 weeks ago to lung cancer. It was so therapeutic to feed and play with these bunnies who so desperately need a home. Last year, there were 171 bunnies living at Best Friends. 32 of them were adopted. These rabbits ate 18,900 cups of rabbit pellets and 85,000 cups of greens. It takes so much to keep these little guys where they are. It’s hard to resist their adorable faces.  We prepared food for the guinea pigs by chopping peppers, oranges and other veges together for them. Then, we cuddled with Fritz, the little guy with the leaf in his fur. We then spent some quality time with the rabbits, playing with them and petting their fur. 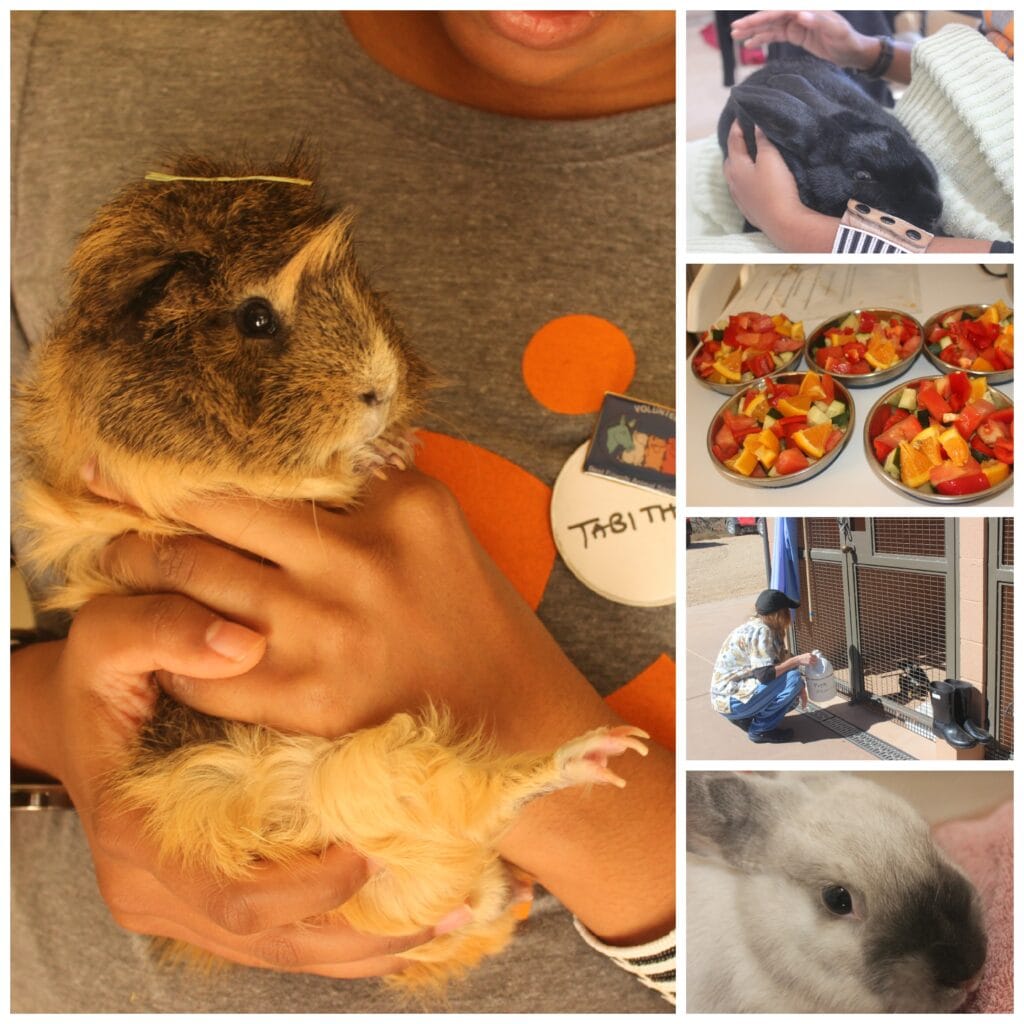 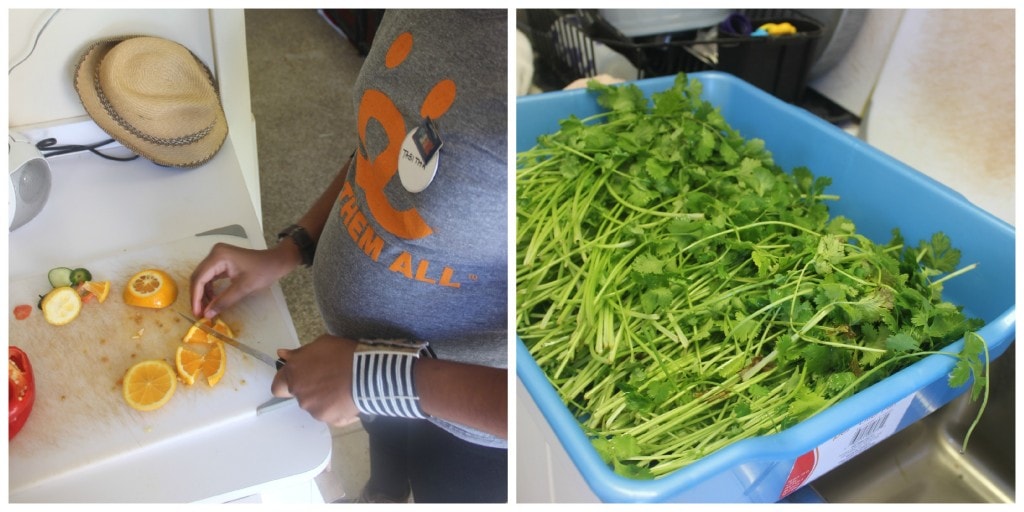 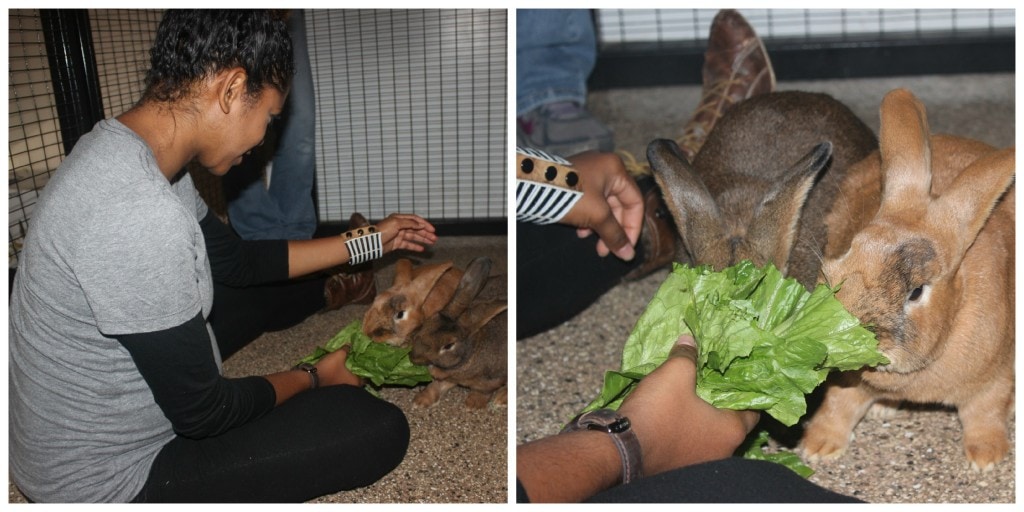 Best Friends exists based on donations from people like you and I. The average donation is about $40. This helps sustain homes for these animals. The Canyon employs 53 employees, ranging from security, caretakers, maintenance, utilities, etc. It literally takes a village to keep Best Friends in motion. In 2013, 7,300 volunteers helped feed, train and keep these animals safe. Over 25,000 visitors came by the sanctuary. I was impressed by the sheer size of Best Friends and all they do to keep everything in motion for the animals.

On Day 2, we explore more of the sanctuary and spend time with the people who help keep the show in motion. Click here to read more about Best Friends.