I’m so excited to share more behind-the-scenes knowledge from the Pixar animated film, Inside Out. Today, I’m going to be focusing on two different elements: layout and lighting. Now, I know what you are thinking…. HUH? What is so special about lighting and who really thinks about layout when it comes to a cartoon? Well, after these two conversations  – the answer is YOU AND ME.

My people… lighting is everything.

I mean, as a professed selfie lover, I could have told YOU THAT. (ahem) But honestly, I never thought about it for an animated flick. That might be because I’m an only child and it’s always me, me, me!!! 🙂 But seriously, lighting can take a drawn picture and transform it into an magical adventure.

Let’s just get started because there are a few great takeaways I want you to read. 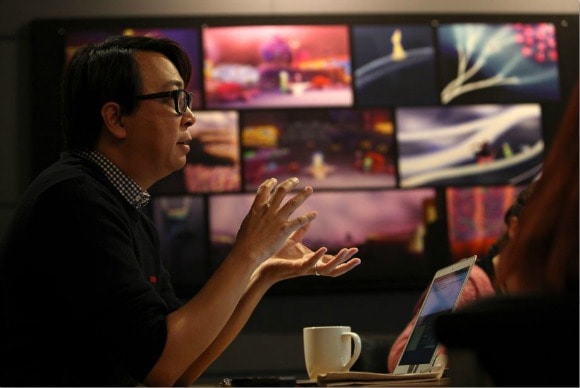 My first meeting was with Patrick Lin, Layout Supervisor for Inside Out. He told us that there is a certain process that all animated films must go through.  The movie must first get through the layout department, then the animation department and finally the lighting people button everything up! Layout is where it all begins. 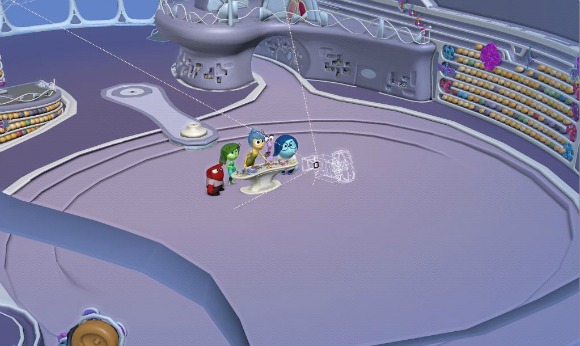 Here’s what was so fascinating to me – animated films have to think about whether or not they want to show a feeling of a mechanical moving camera or a hand grip. Depending on their choice, the feel and flow will show differently on screen. So, even though it’s completely drawn by hand / computer, everyone must be conscious of how each moment is going to be shot.

After some heavy debate, the Inside Out team decided to use this concept. Act 1 used straight track movement and Act 2 showed a more streamlined feel.  As a movie watcher, you aren’t thinking about whether or not the camera is shaky or smooth as it focuses on the main characters, but this decision really results in different FEELINGS for the audience. It’s the little things — and THAT’S ALWAYS what puts Disney and Pixar on top.

A Scene To Look Out For:

I want you to look out for a scene in Inside Out. This one – in particular – points out the usage of movement and camera flow. When Riley tries out for the San Francisco ice hockey team, she stumbles on the ice. In that moment, she is confused because her emotions are having issues inside her head. During this scene, the camera gets blurry – it turns out of focus. This is INTENTIONAL because it’s to show that Riley was out of focus. Think about this – as a movie watcher the “out of focus camera” will trigger your brain to register that the child is confused but it might not be something you are aware of right away. These small, tiny details add up and are the main reason it takes 3-5-7 years to make a successful movie within these powerhouses.

Here’s something else the layout team did to subtly send a signal to the audience. In the beginning of the movie, when everything seemed right in Riley’s world, Riley is always shot in between her two parents. She was always positioned as the center of their universe – as all children percieve themselves to live.

When Riley feels that things are changing, her positioning changes. The shots change. She is no longer in the middle anymore. She is no longer centered. AGAIN – as someone in the theatre, you aren’t going to turn to your friend and go, “Hey, notice that Riley isn’t between her parents anymore??” But your brain will pick up the difference – it will notice that there is no longer that family circle in play. So very INTERESTING!!!!!

These layout decisions are a way to visually show a message without having to LITERALLY say it out loud. 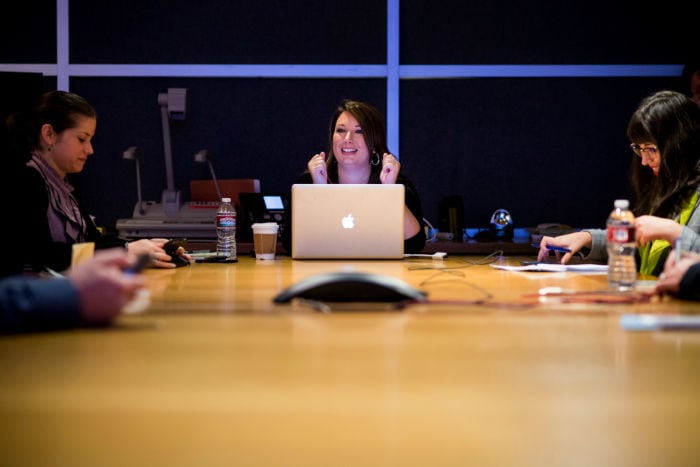 The “Inside Out” Long Lead Press Day, including presentations by Lighting Artist Angelique Reisch, as seen on March 31, 2015 at Pixar Animation Studios in Emeryville, Calif. (Photo by Marc Flores / Pixar)

What would you say if I told you that one scene in the Inside Out movie has over 170 lights in it? That means that there are 170 unique sources of light that is illuminating the scene. WOW. It’s not just about turning a simple lamp on in the room. This is a room that has no light if you think about it. This is a team that has to start from scratch every single time. They are constantly challenged to create from zero.

In one sense, it’s awesome because they can make it look EXACTLY how they want it too. On the other hand, there’s no getting lazy on this team!!! You have no choice. The sun isn’t there to pick up any slack… unless someone puts the sun in the sky that is. 🙂

In Inside Out, there are two completely different worlds to light. This was one of the many complexities for the film. So, how does it all happen? Well, the lighting team starts with a pastel from the art department and a kick off from the Director of Photography that has story points. Then – they get creative!

Lighting is everything — after sitting through this conversation, I understand that it’s really the department that brings the POW to a scene. Lighting can direct a viewer’s eye to the main point of the scene. It can make a beautiful building seem like a haunted mansion. Or it can illuminate a boring road and turn it into an enchanted adventure.

I WISH I had these two pictures to share with you that I saw. They showed me a building the way the lighting department receives it and then they showed me what it looked like after they finish with it. My mouth hit the floor. Everything you love about the movies – the cherry on top of your sundae  – that’s the lighting department. I don’t know how to say it any other way!!

Will you be taking your children to see Inside Out? I hope you will! It’s one of those movies that EVERY family has to see!!! My daughter wants her birthday party to be an Inside Out movie screening and we are going to have so much fun!