Hey Disney Infinity fans!! Three of Marvel’s biggest bad guys just joined the game. Spider-Man’s arch-nemesis the Green Goblin and Guardians of the Galaxy rabble-rousers Ronan and Yondu are now up for grabs and you better believe the kids were uber excited to check them out. So bad… but oh so good. 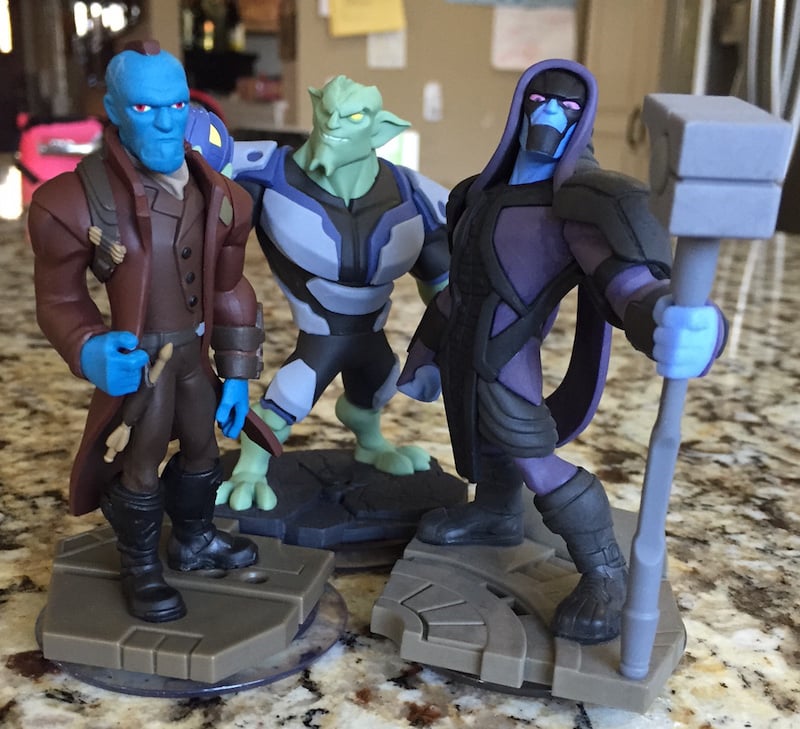 All that bad power in the palm of your hands. (insert evil laugh here)

Here’s a little breakdown of what’s new and evil for Disney Infinity:

•       Green Goblin: Armed with Pumpkin Bombs, the brilliantly nefarious Goblin uses his Electro Shock Gauntlet to dispatch opponents handily in both Marvel’s Spider-Man Play Set and the Toy Box (2.0 Edition). Superhuman strength, spectacular jumps, and the ability to charge his bombs into more powerful bolas all make him a villainous force to be reckoned with for both symbiotes and Super Heroes alike.

•       Ronan:  Wielding the Universal Weapon, the ruthless Ronan the Accuser is an unstoppable force in both Marvel’s Guardians of the Galaxy Play Set and the Toy Box (2.0 Edition). Cloaking, energy blasts, and superhuman strength are all part of the powerful arsenal at Ronan’s disposal as he vies to become the mightiest villain in the galaxy.

•       Yondu: From deepest space to both Marvel’s Guardians of the Galaxy Play Set and the Toy Box(2.0 Edition) comes Yondu, leader of the outlaw crew known as the Ravagers. Whether he’s trying to outwit the Guardians of the Galaxy or face off against a squadron of Sakaarans, the crafty Yondu uses his whistle-powered flying arrow, devastating combat skills, and wicked wit to come out on top.

For more information, check out the Disney Infinity website.