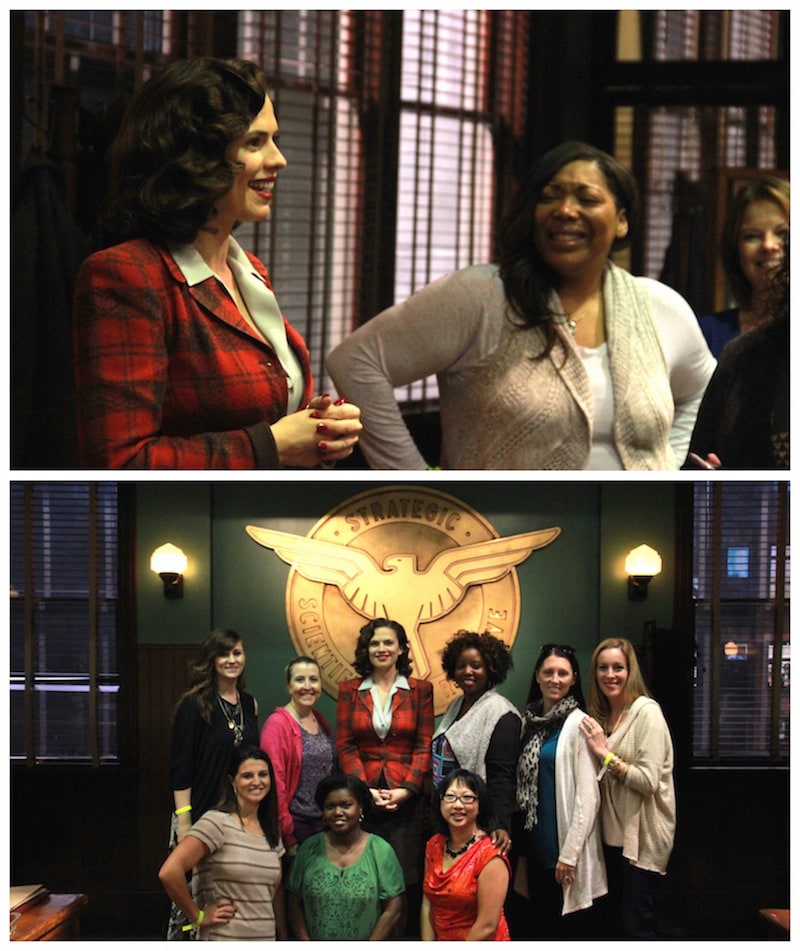 So exciting! Before I even dive DEEP into my set visit to Agent Carter and exclusive interview opportunity with Hayley Atwell, I want to let you know that I spent a good two hours ripping through every single photo card I owned looking for these shots. I mean… I’m talking RIPPED MY HOUSE APART – camera by camera – in a panic. And then… I remembered… that we weren’t allowed to bring cameras on the Agent Carter set because it’s that exclusive. We had to have a photographer follow us around and take the photos just to be sure that nothing EXTRA was getting out into the public ahead of time. You know, villain names, plot spoilers – all that jazz.

I feel a little foolish this AM. Well, I guess I should say PM since it’s now well into LUNCH. Oh my word.

Enough about my issues, let’s talk about Hayley and Agent Carter! Totally amazing! The Disney / ABC blogger group had such a great time walking through the entire set and meeting the cast and crew. Not only were we able to watch a few moments get filmed, but we were given ample time to check out key locations from the hit TV show. 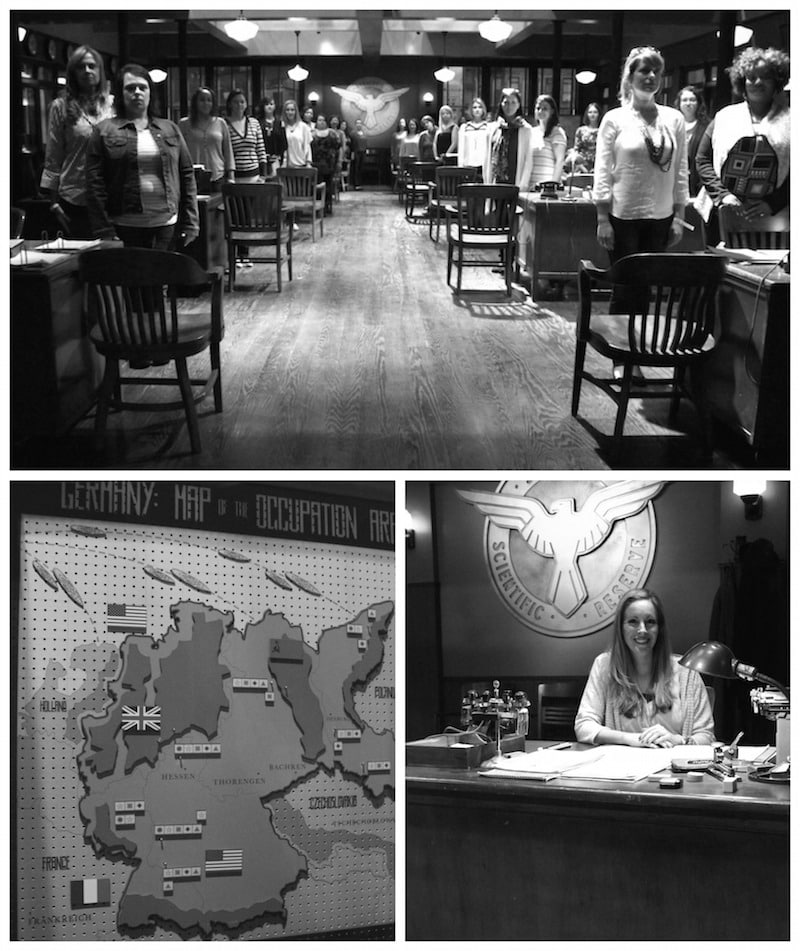 Does this room look familiar to you? It should if you are a fan. We each had the opportunity to sit down in Agent Carter’s desk. Every cell in my body wanted to kick my feet up on the desk… but I refrained. It was so, so hard to refrain. Know it!!! Something you should know about this set — a lot of what is placed throughout is original. Tape dispensers, papers, stamps, folders — these items were acquired through hunting local markets and thrift shops. We were told to not handle these pieces with too much force because some were literally over 50 years old. Talk about authenticity! 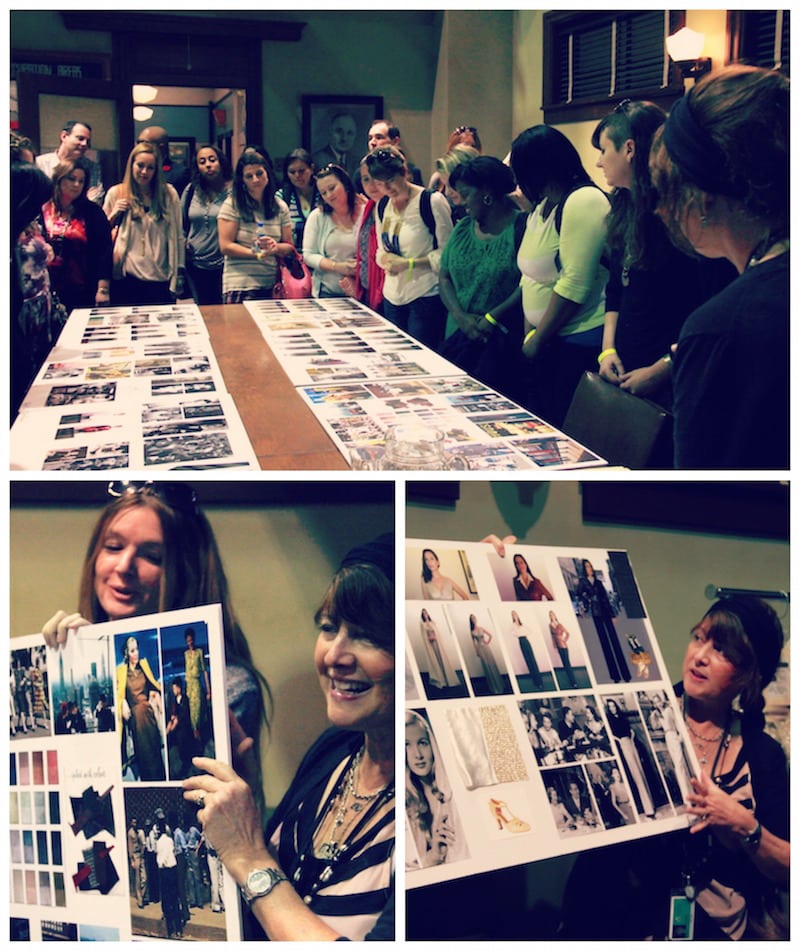 Then it was time to talk to the women who bring the characters to life through fashion – the costume designers. Head designer Gigi Melton walked us through their inspiration boards and color pallets. Most of their pieces are either original (meaning they found and refurbished articles of clothing from this time period in thrift shops  / prop houses) or custom made to replicate clothing from this era.

Now, here’s where it gets interesting. In an attempt to make everything look TRUE TO FORM, their first priority is to always use the original pant suits / dresses / or slacks. Yes, it would be easier to just make a new one using fabrics from 2015, but that would take away from the story – or so they believe.

The costume designers KNOW that in 1930, ties were only made in a limited amount of fabrics. You and I might not know this of course!  But Gigi does. So, in order to make sure that Agent Carter looks the part, the costume design team seeks out pieces that make sense for the story. You will find the right fabric from the right time in these frames. Now that I know this, I find it absolutely fascinating. Who knew that this much time and energy went into the costumes!!?? I most certainly did not!! 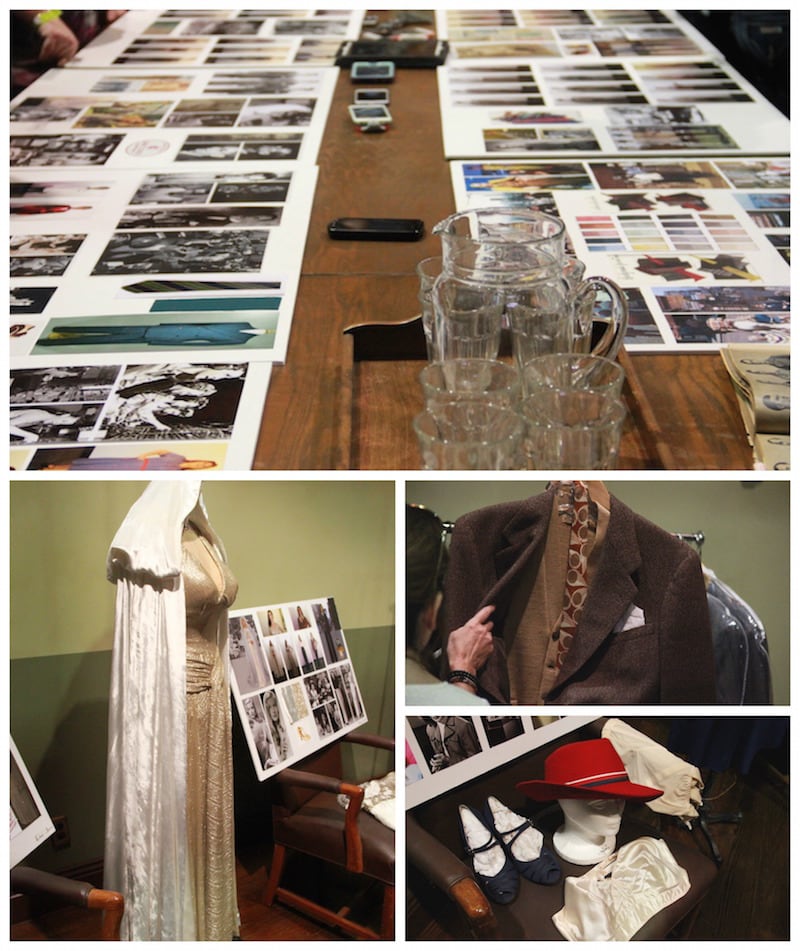 And when they do make a piece, they usually have to make several back ups. One is called the “hero” – or the clean version that will be used on the main character for the opening shot. The backups are typically used for action sequences or for back up. It’s always safe to have extra just in case something happens.

Take Hayley’s custom gold ballgown above. You can see the mood board that provided inspiration for its conception. This dress was multi-purposed though. It had to look great on Agent Carter (easy), but it also had to perform well during an action sequence. For that, the designers had to make sure that the actor was able to jump and kick and swing. This meant it couldn’t be constricting at all. Because of the risk an action sequence offers, they needed to create backups for Haley. What if she ripped it by accident? It might happen, right? So much to do – so little time!!

I really enjoyed chatting with this team. Really gave me an entirely different perspective towards something that I used to take for granted. 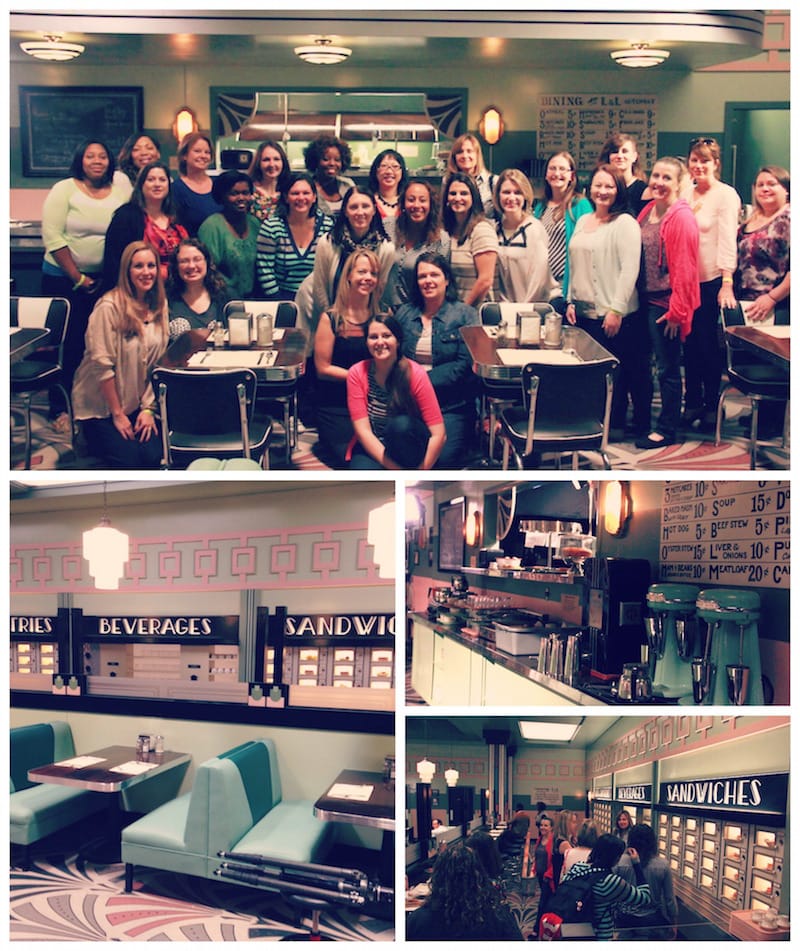 Another set location that we visited was the Agent Carter Diner. Here’s the thing with me — I am someone who never EVER believes that a location is a set. It’s ALWAYS REAL. ALWAYS. This was SHOCKING TO ME. It’s always SHOCKING TO ME. When I found out that the black-ish house wasn’t real, I just about hit the floor. Same thing here. What? This diner isn’t a real diner? What is going on? Is anything real out there?! So so gullible. UGH

If you are wondering, everything is pretty sturdy. It’s not built out like a REAL diner. If my children had 30 minutes in there, I am sure Caleb would tear down a wall. But you can sit everywhere and the lights work etc. Three walls – not four, and nothing is behind the counter. Very deceptive! Fooled me big time. 🙂 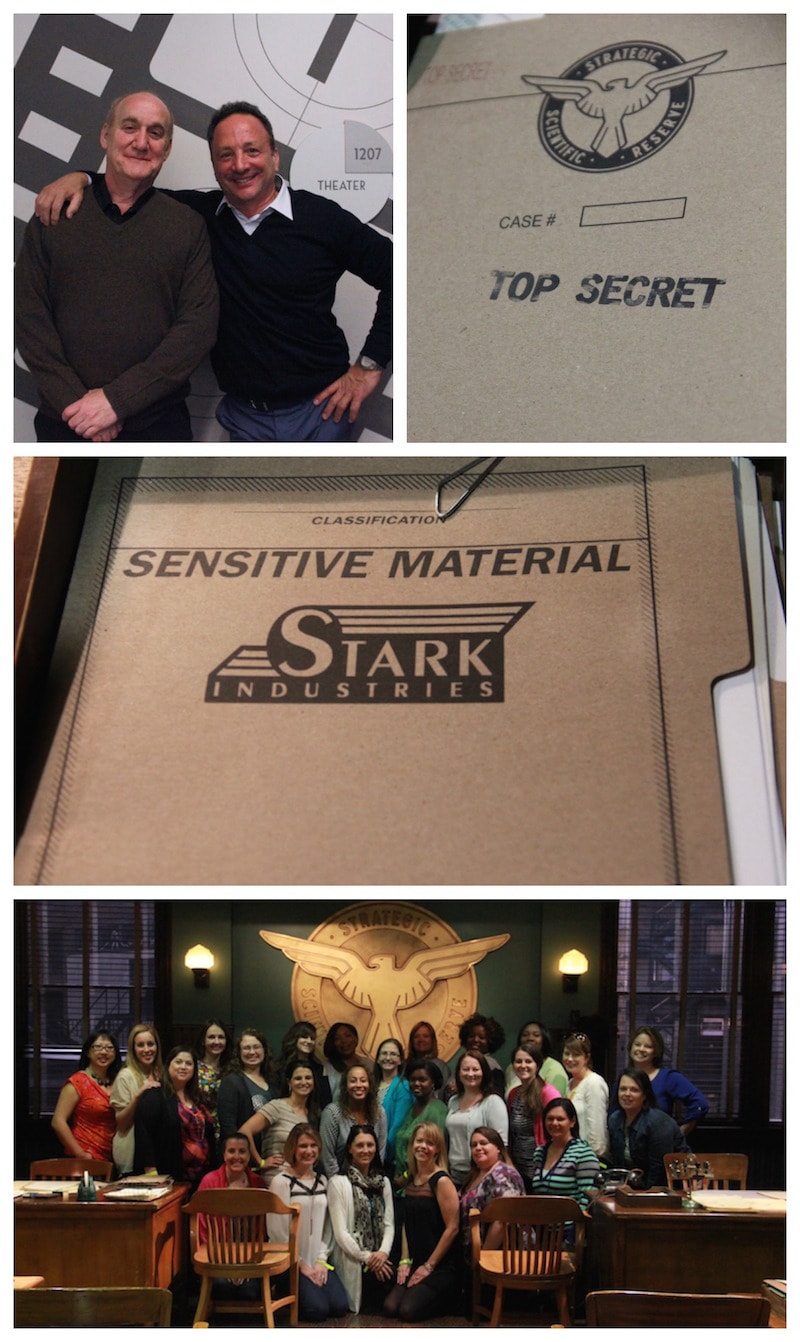 I had an amazing time on the Agent Carter set! I hope you plan on tuning in tonight!!  Agent Carter airs on Tuesday 9PM EST on ABC.

The group even had a chance to interview Haley and she was so kind to open up about a few different things – including her training routine, her love for fashion and what’s next for Agent Carter!

I trained in theatre. So, my education included a lot of combat and stage fighting which helped make it look realistic. It was in my background. We have a fantastic stunt coordinator and his wife is my stunt double. She would teach me a few things and I would copy her. The team would then shoot it in bits and we’d nail each and every shot and make sure it looked pretty solid on camera.

Interval training and running and keeping my stamina up.

On day one I kicked one of the stunt man in the balls. Kicked another in the face. I’ve made a lot of mistakes to make it look the way it does.

I appreciate the detail of clothes that are tailored for you compared to clothes just from a department store. When you have well-fitting clothes that flatter you, it gives you such a lift. In the 40s, women’s curves were really celebrated, it was such an elegant time. It’s made my taste more expensive because I find that high quality clothes are more flattering than the shapeless Lycra stuff that happens to be everywhere. The main thing is learning to wear the clothes and not have the clothes wear you. Don’t wear clothes that are on trend. Wear clothes that are perfectly tailored to you and that fit your body.

One of the things I am going to do is commission the Costume Department to make me a few staple pieces to round out a capsule wardrobe. I rather have that than an entire wardrobe of on trend pieces that don’t fit me well. Although this might be more expensive initially, not only do they last longer but in the long run these pieces will help eliminate all those impulse purchases that never quite fit right.

I don’t know what we are doing in the next episode yet? I think we find out tomorrow what’s going on next week. It keeps you very present. It’s also a really good cop out when people ask you to tell them secrets. The truth is that I really don’t know?!

“Time & Tide” – As Agent Carter closes in on Howard Stark’s stolen technology, Peggy’s secret mission could unravel when the SSR arrests Jarvis and a secret is revealed, on “Marvel’s Agent Carter,” TUESDAY, JANUARY 13 (9:00-10:00 p.m., ET) on the ABC Television Network.

** Disney / ABC invited me to LA to visit the Agent Carter set. All opinions are my own.