It is so sad to know that the last time I went to Malta was in 1998. I mean – that is just insane. I spent almost every summer of my life there and now it’s been over 10 YEARS since I’ve returned.

It’s all Bill’s fault. I met Bill in April of 1998 – already had plans to spend the summer in Europe with my family – and then when I came back I started vacationing with him (and haven’t stopped).

I’m going next summer if it KILLS me. My children NEED TO GET THERE AT LEAST ONCE!

Ps check out that walkman… LOL!

Unfortunately, I don’t have my house anymore. We sold it a few years ago which was so very sad. 🙁 But at least I will have air conditioning and… television and… a phone at whatever hotel I choose. LOL! Yeah it was bare minimum living when we traveled to Europe.

Here we are in our backyard. That’s my first cousin Sandra. We were both totally obsessed with this well. Right next to the well were orange and lemon trees as well as a chicken coup. Everything is pretty much made out of limestone in the villages. 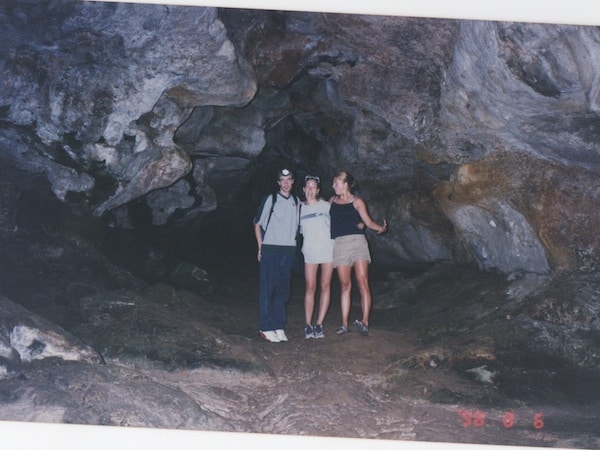 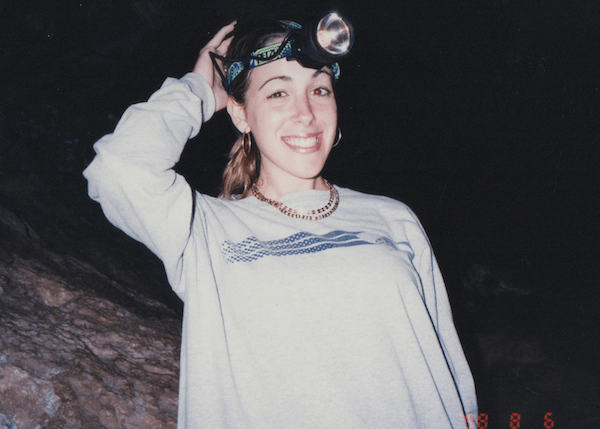 Here I am at Hassan’s cave, very late at night. It’s actually a terrible story. A Turkish man fell in love with a Maltese girl and her family wouldn’t allow her to be with him. So they ran away to live in this cave. In order to get by they would kidnap young girls and sell them to passing ships. It’s supposed to be haunted and it was MEGA creepy when we went because naturally we went at like midnight. I was shaking in my boots… err… sneakers! Wait, I used to own sneakers? That’s CRAZY! 🙂 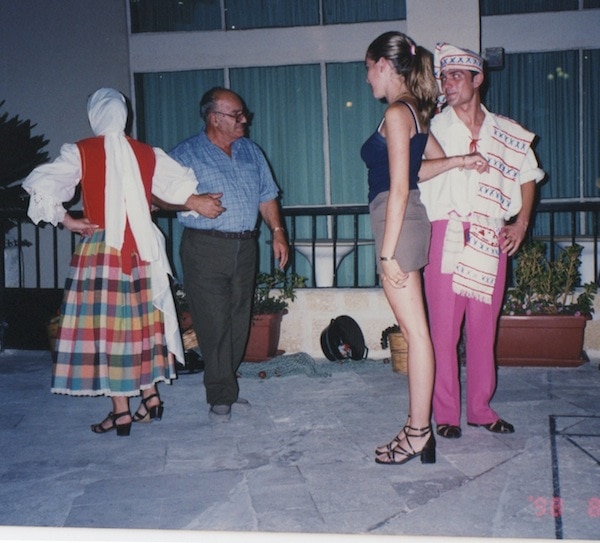 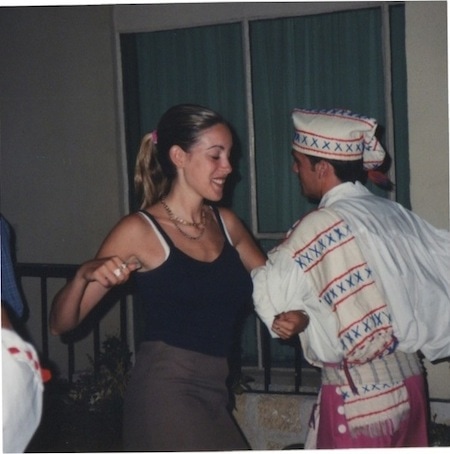 Here we are at a restaurant. They put on a little show and I was asked to dance with them. Look at that pink outfit! The man dancing with the woman is my great-uncle. 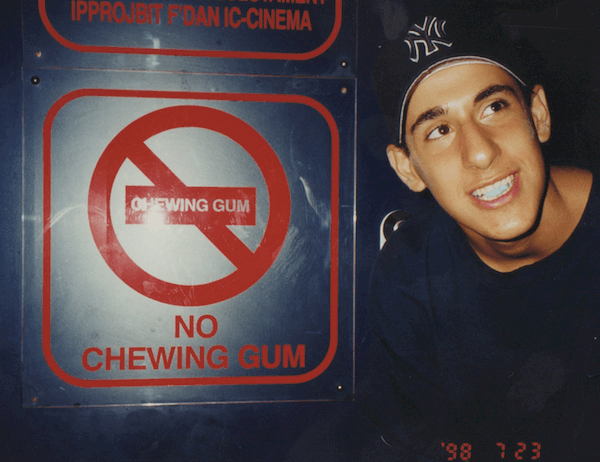 And unrelated to the beauty of the island – I thought this was pretty hilarious. At the movies, you weren’t allowed to chew gum! Isn’t that wild?? Not sure if it’s still the same way. 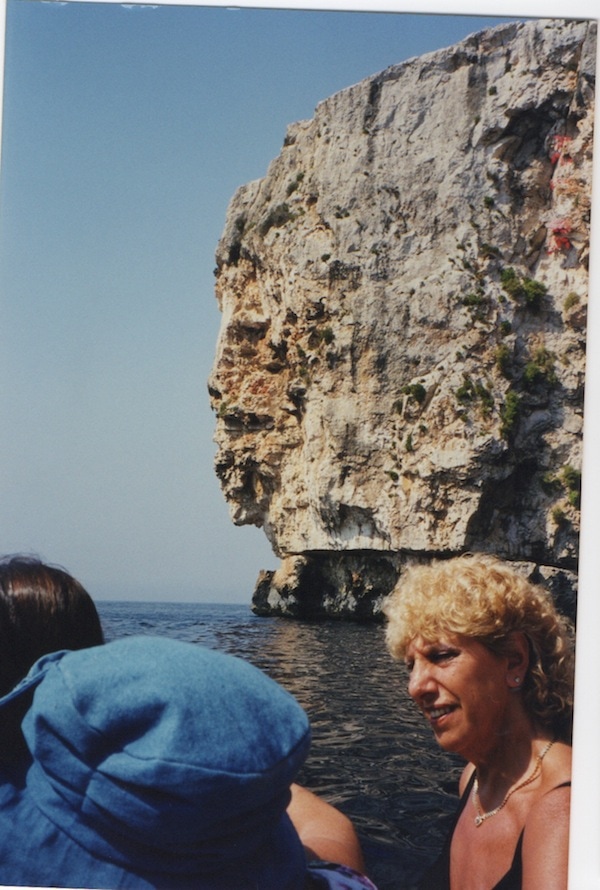 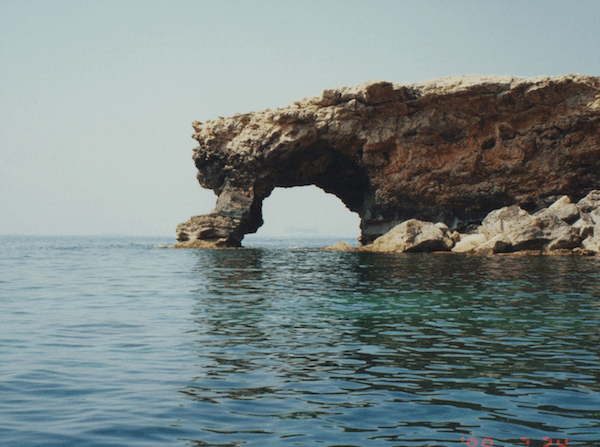 Now onto the water. Absolutely the number one reason to go to Malta. The rock formations and the sea are probably two of the most beautiful things I’ve ever seen. 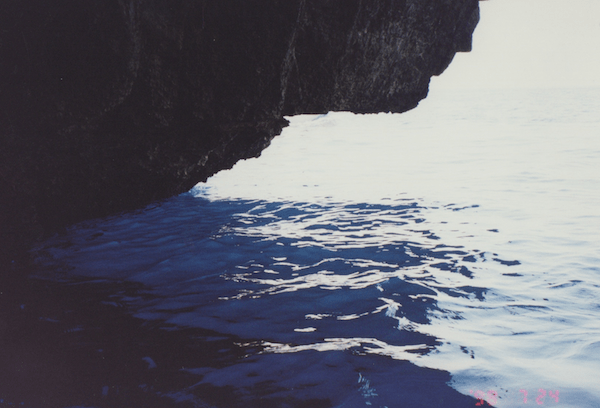 You can SEE how blue the water is in this shot. Mind you – I had a regular dinky camera and these pics are from 1998. BUT YOU CAN STILL SEE THE BLUE. This area has something in the water that keeps it blue even in your hand. When you scoop it up, it is the same color as the sea. I couldn’t believe it.

Even though we didn’t have our bathing suits on – we jumped in! How can you NOT take the opportunity to swim in such beauty?! We were in this deep cave and I was just waiting for an octopus to take my leg and pull me under. LOL! We were pretty far out away from civilization. I remember this day vividly. 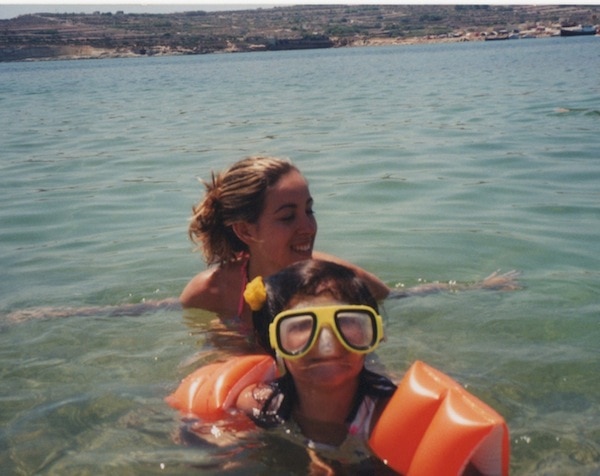 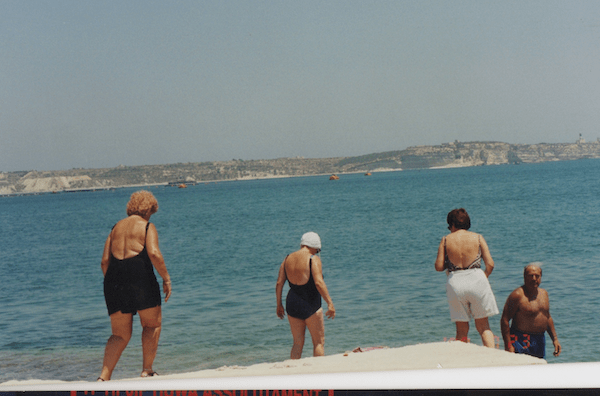 Thankfully, we swam all over the island – beaches included. 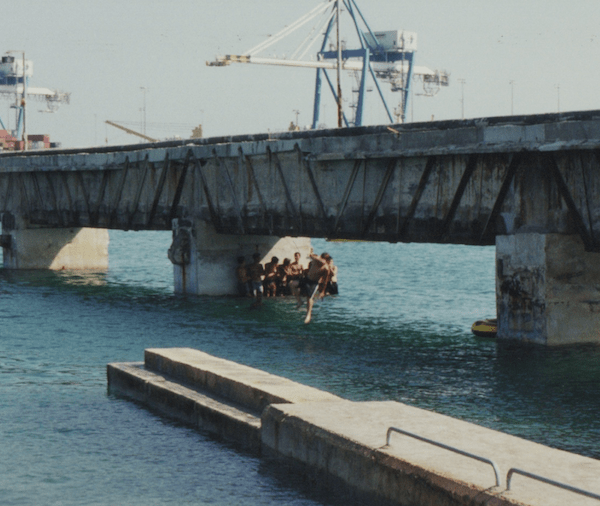 And this bridge I’ve jumped off of a MILLION times. It doesn’t look very high in this pic, but once you are up there – it’s a different story. I remember having to climb over some wire or gate to get to the jumping area the last time I went. The city officials tried to block us out and I was FREAKING thinking that I was going to die, but my cousin Owen literally walked me through and showed me how to get to the other side. Once that happened, I was golden. Gosh – every time I write about something I am saying I was scared. LOL! At least I still did it, but man I’m a wuss.

I should show you some of the cliffs I’ve jumped off of. We would say the alphabet as we jumped to our deaths and I think we would get to M or so. REALLY HIGH!!! I probably wouldn’t do it as an adult. Ignorance is bliss, right? 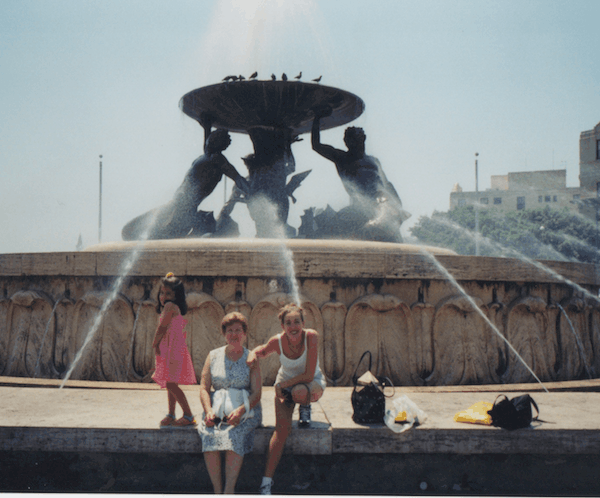 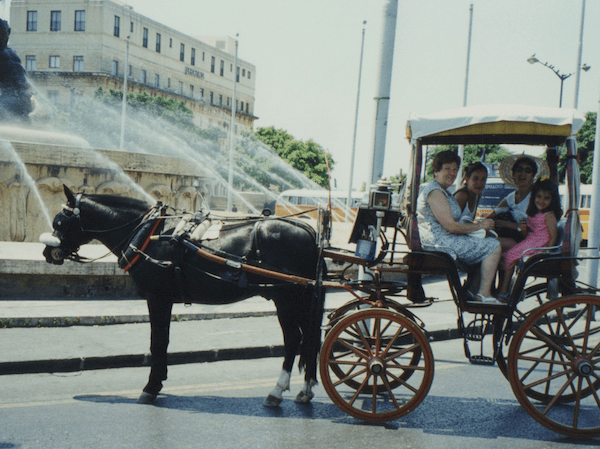 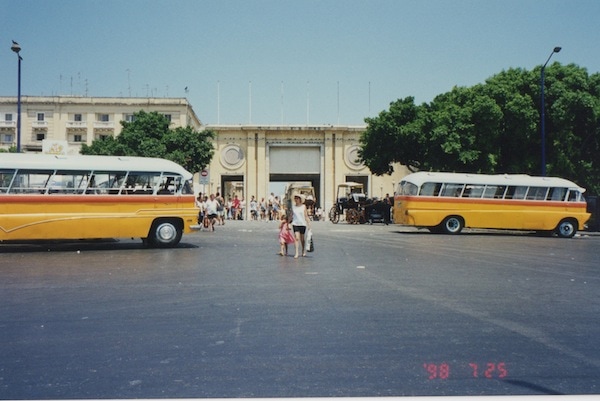 Valetta is the capitol of Malta and the center of activity for the island. It’s where all the buses end, where all the shops and restaurants reside and where most feasts occur. You can take a horse and buggy from here as well, though I’m pretty sure we just posed on this one. I don’t think I ever rode in this while on Malta – it was all for show. 🙂

You can see in the background the yellow buses. That’s usually how I got around the island because it’s SUPER cheap and convenient. 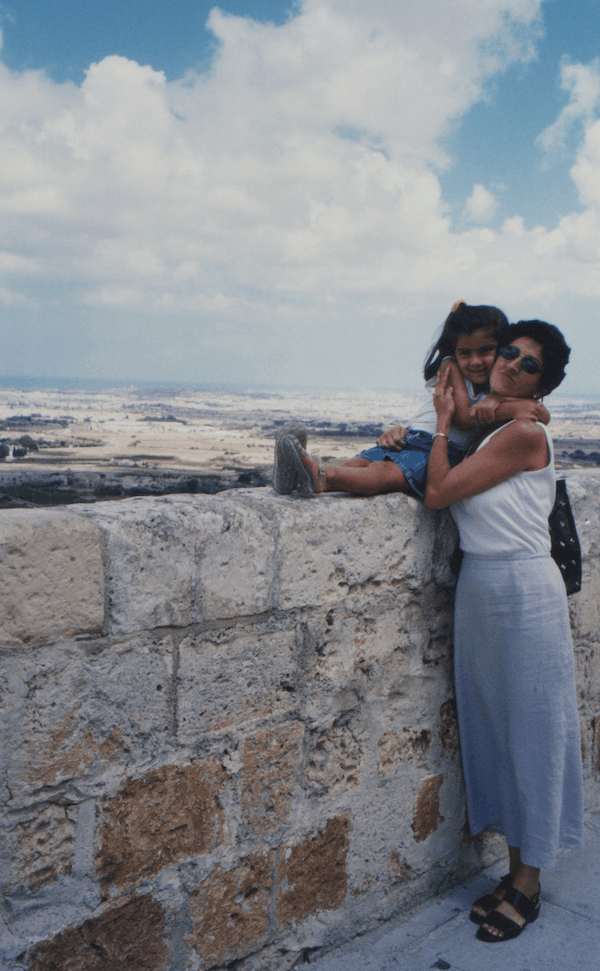 (my aunt with Sandra) 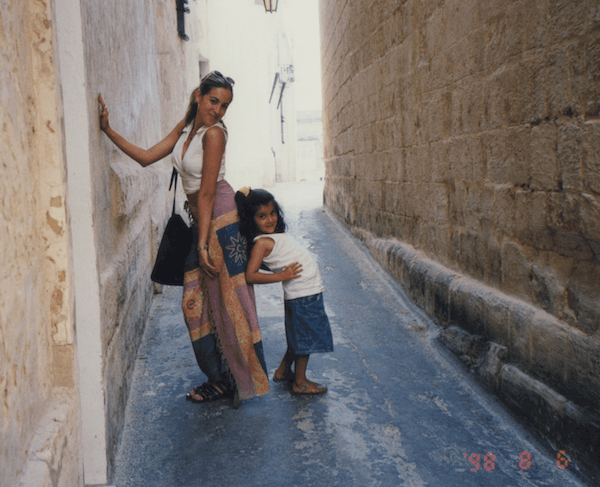 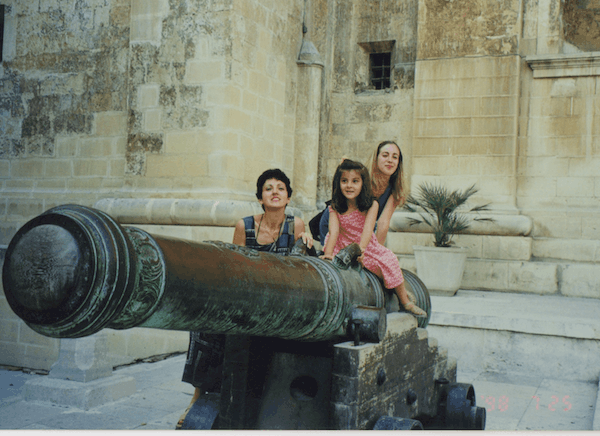 The streets are SUPER narrow. That’s why people either have motorcycles or those TINY CARS (forgot the name of them). Again – lots of limestone. 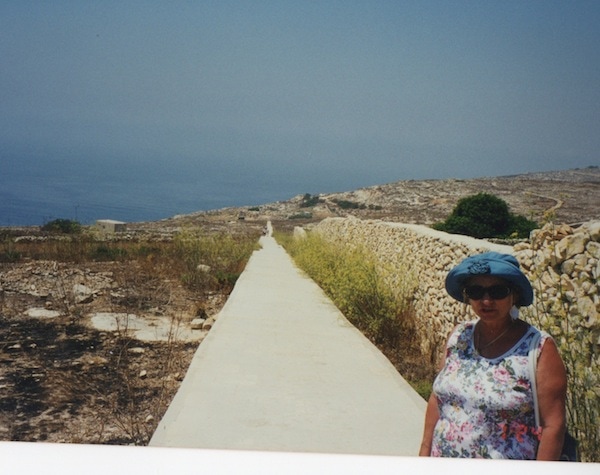 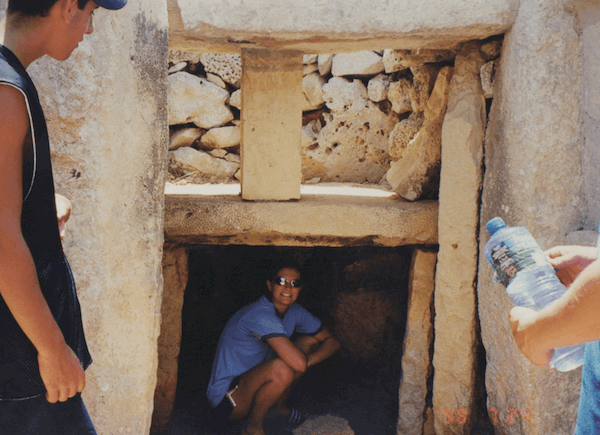 Last but not least, we have the prehistoric temples of Malta. They are SO UNKNOWN BUT THEY ARE OLDER THAN THE PYRAMIDS AND STONEHENGE!!! I wish more people knew about Malta – there really is so much to see. So much history.

The temples are literally the oldest standing stone structures on the planet. They  date from 4000 – 2500 BC.

Have you been to Malta? I’m sure things have changed since my last visit – but I also know that so much is exactly the same. 🙂

There is SO MUCH MORE to see and do while there. I was young so I didn’t really take pictures of the churches, the forts, the architecture. It was really just my family and friends mostly . Here are some shots from the Internet: 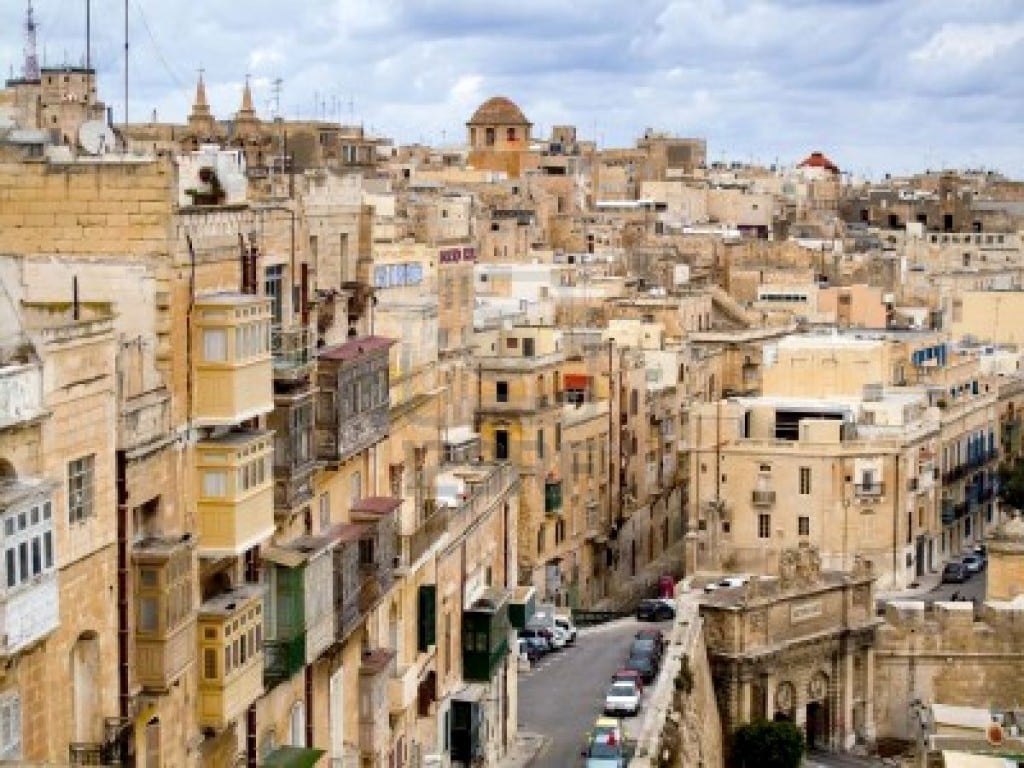 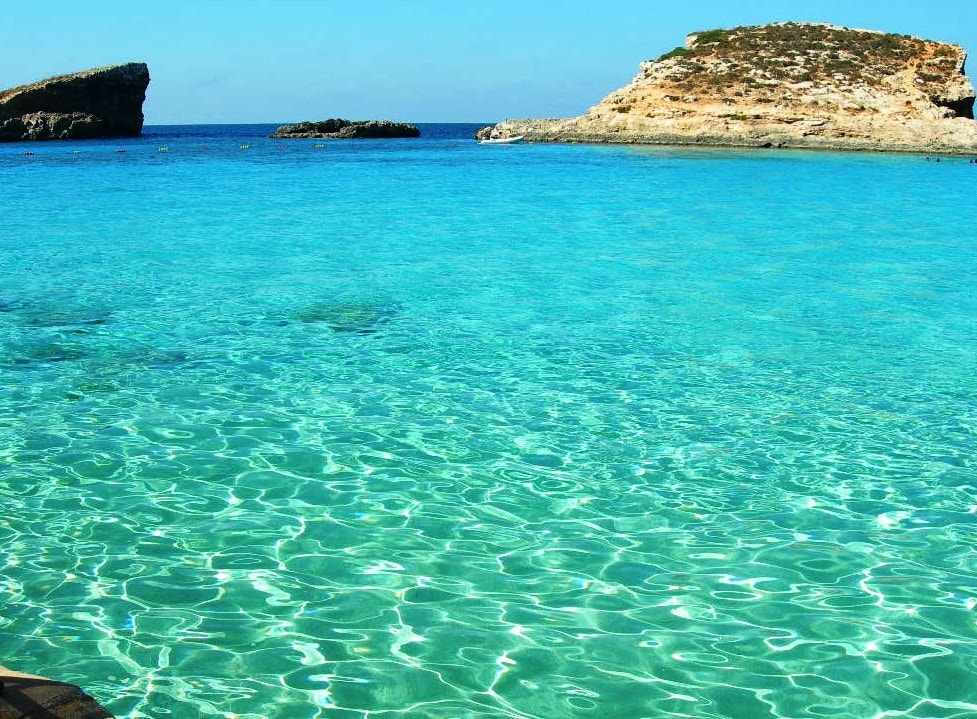 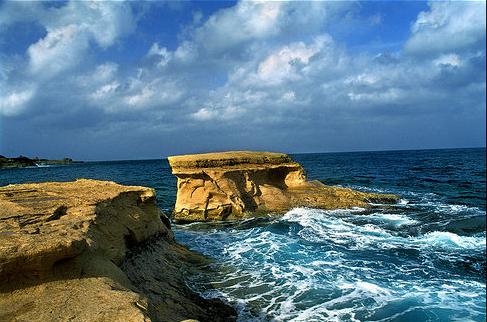 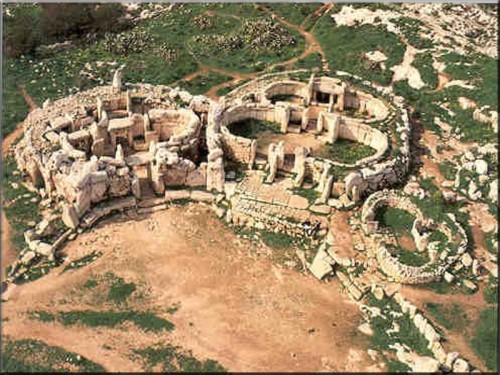 Vera, was excited to happen upon your Blog. first i found the recipe for the maltese Torta, which brought back childhood memories, then your blog and pictures. My grandfather was from Malta and I have never been but would love to go. Since He nor my mother are any longer with us I have hesitated. You stirred my desire again. I am curious about hotels or places to stay. I have no contact with any family there and would love the old world influence on my visit. If you have any suggestions I would love to hear them.

Came across your blog while searching for a Maltese rice recipe. Thanks for sharing the memories of Malta. I too used to travel there every summer while growing up until 2002. Now I go back to visit with my wife and young daughter every other year or so. We live in CT. Hope you get to go back soon. The festas, pastizzi, warm nights and smell of wild fennel in the air will bring you right back to your youth.

I LOVED the photos of you :) And Malta, I can't wait to visit one day! Looks like a beautiful place, and I hope you get to take your family there one day too.

Ah, Vera, catching this post of yours on Malta just felt so synchronous. I had to give you a shout out! I don't know if you recall, about five years ago, I was sorta kinda doing a "green mama" spot for you. I think I did one! Needless to say, being a contributor was not my calling, but I have to tell you that I have visited INO (and read every post, practically) since, like late 2004. I discovered INO when I was pregnant, and my daughter is six and a half (bout the same as Natalie :). So, having felt like I have "missed you" for a little while (assuming you are no longer the one who posts regularly on INO, could be wrong here), I hopped over to your blog and *here* found your post on Rachel Ray and Meister Eckhart... and then Malta. I almost went to Malta as an exchange student in 1998. Instead, I went to Perth, Aus. Your pictures, and I love that you're in them, are just perfect. Kudos to you and its been so fun being around watching Vera explode (like a firework)!

great job!! Cant wait to go back....I go there in my heart often.