SPOILERS — DON’T READ THIS IF YOU DON’T WANT TO KNOW BECAUSE YOU WILL KNOW!!!!! 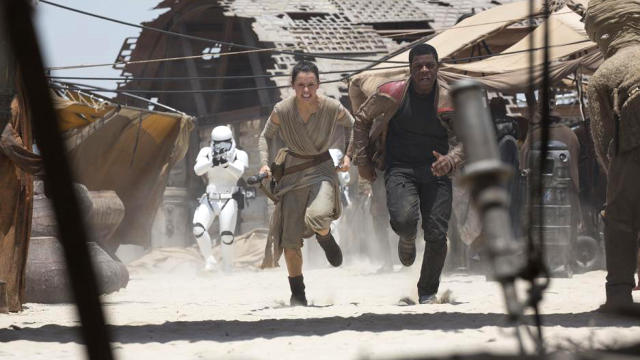 Last week, I took my kids to see Star Wars: The Force Awakens and whenever things start to slow down in my life, I remember how absolutely fantastic that film was.

Now, I have a great relationship with Disney and I hope that this post sits well with them because the last thing I want to do is to make waves, but I have to say these things. I just have to!

Last year, I had the chance to interview George Lucas during a ‘Strange Magic’ junket. I wrote that piece in a very light hearted manner, but as I jotted down George’s answers to that first bullet, they didn’t sit well with me. Long story short  (if you don’t want to go back and read the post), he said that he created ‘Strange Magic’ because he wanted to make a film for girls. It was time for him to focus on little girls. So, he made a musical that focused on fairies and love and la la land and happily ever after.

Now… I GET what he was saying. But…. as a woman who HAS NEVER solely leaned that way, I shifted in my seat as I took notes. I didn’t like hearing that quote even though I understood his stance. Star Wars – 30 years ago – was targeting boys.

I loved Star Wars back then as much as I loved it today. And I watch every single Marvel movie that comes out WHEN IT’S IN THE THEATRE because that’s who I am. I am an action-packed, adventure seeking, PLEASE PUT ME IN THIS MOVIE BECAUSE I LOVE IT SO MUCH kind of girl.

Fast forward a year, and there I was in the theatre watching Star Wars with my kids and there she was… Rey. She was running and Finn kept trying to protect her and she was shouting “Stop Holding My Hand!” over and over again and I just burst into tears because it was right then and there that I remembered sitting with George and how he said that Star Wars really wasn’t for me. But I knew in that instant that this latest film was going to be different. Rey wasn’t going to be in a bikini. Rey didn’t need saving. Rey wasn’t going to have a gratuitous sex scene. Rey wasn’t going die because she was weak. Rey was setting the scene. And I exhaled.

I was ugly crying. And I’m not kidding. My son was looking at me like I was crazy, but there was so much more to that scene than what the kids understood. I knew where we were going.

And we went there.

Even Princess Leia grew up to lead the Rebels. YYYYYYYYEEEEEEEEEESSSSSSSSSSSS!!!!!!! And even though it would have been nice, there was no happily ever after for her because that’s not always reality. This was one of my favorite Star Wars yet. And that’s saying a lot.

Rey kept waiting for her family to come and get her. She kept – essentially – waiting for her prince charming in true Disney form. But in this movie, she didn’t need her prince to save her. That’s a 2015 trend that I applaud. It started with Frozen and I cannot get enough of it!!!

At first, I was shocked that George Lucas sold off his baby to Disney. I guess everything is up for grabs if the price is right. But you know what? I am SO HAPPY THAT HE DID. Because the good people over at Disney did RIGHT BY the film.

She’s the one. My daughter is the one. Our daughters are the one. And now our sons will understand that.