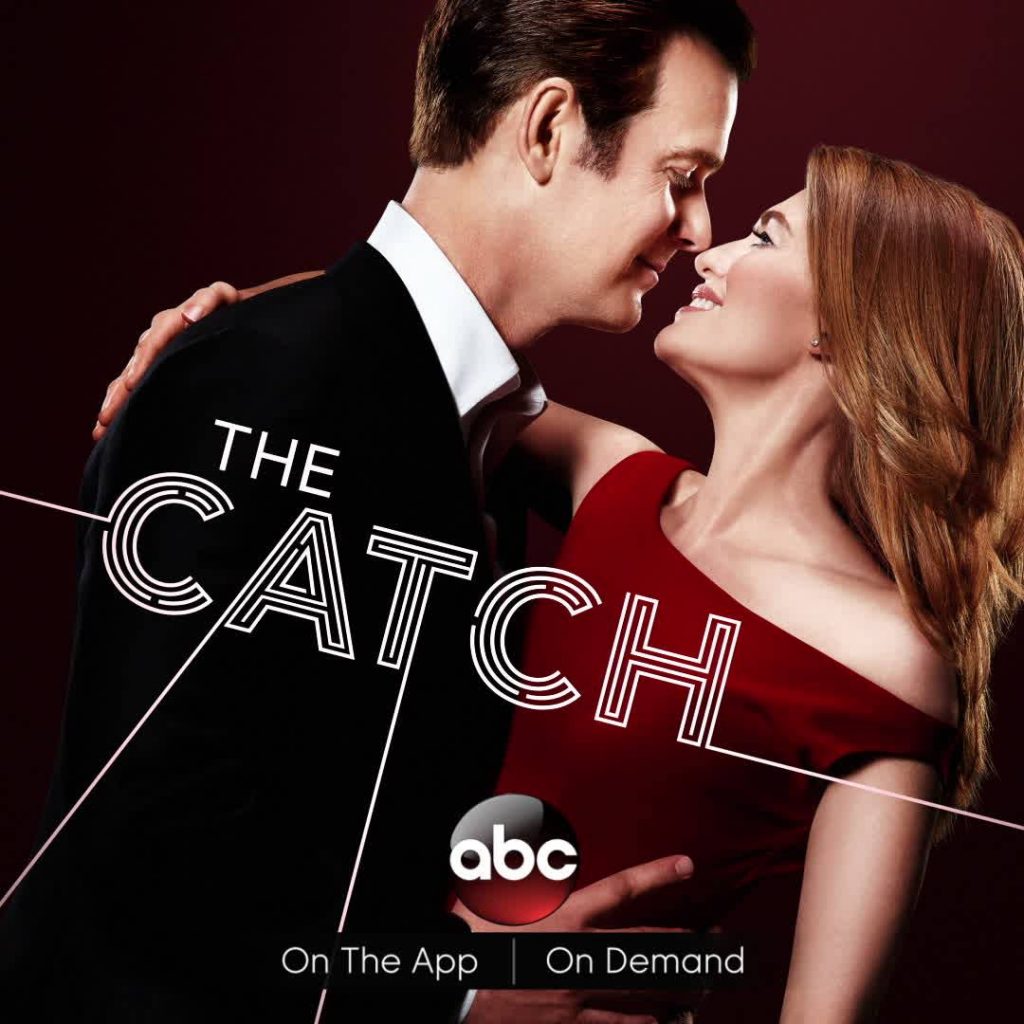 Who to trust? Who to have an affair with? Those are the questions that I am sure plague the cast members of ABC’s hit TV show, The Catch. While in LA, I had the chance to preview one of their upcoming episodes and BOY was it a good one. The Dining Hall offered up everything one would want when watching a late night show. The characters were driven, highly intelligent, sexy as hell and…flawed.

Here’s a quick synopsis of The Dining Hall in case you want to tune in TONIGHT at 10PM EST on ABC.

“The Dining Hall” – Alice discovers some very hard truths about her brother Tommy and Val is forced to dig into her past in order to help with his case. Meanwhile, relationships are tested as Margot and the AVI team have to navigate their current realities, and Ben and Rhys’ latest con may turn out to be a little too risky, on “The Catch,” airing THURSDAY, MARCH 23 (10:00-11:00 p.m. EST), on The ABC Television Network.

One of my favorite characters to follow was Margot and lucky for my group, ABC set up an interview with Sonya Walger – the talented actress who plays the part. She was joined by producer / writer, Allan Heinberg. The two gave us an inside peek into the inner workings of The Catch and we got to dive deep into a world that they hold so dear to their hearts. 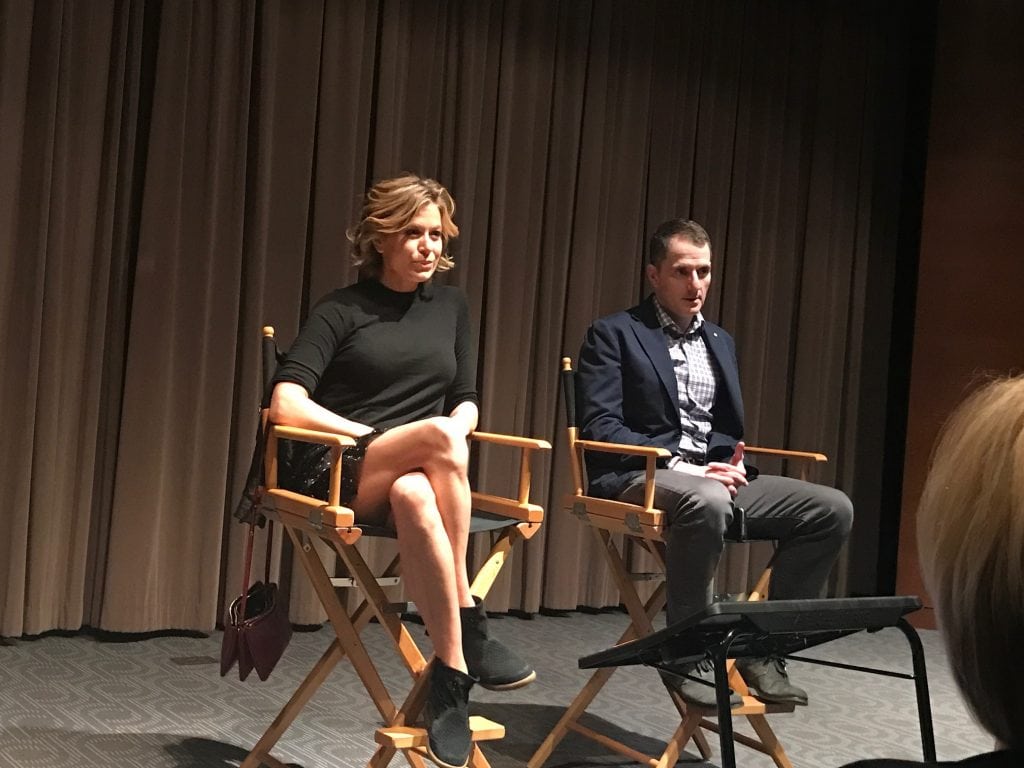 Sonya says she’s really enjoying watching how her character’s relationships are evolving throughout the seasons.

I can only speak to as far as you’ve seen. I think what’s really fun is that Alice and Margot discover they have perhaps more in common than they thought, and there’s a sort of begrudging mutual respect while still there’s a lot of wariness because Margot is Margot. So, you wanna be careful of that. But I think, you know, that was one of the things- those beautiful therapy scenes that Allan wrote us in season one. What I think was so lovely there was the sort of- Margot had this moment of realizing they, they were both betrayed by the same guy.

They actually have all this common ground and, and so that sort of moves into season two where I think they realize that they’re both strong, empowered, intelligent women who can go toe-to-toe, and neither one is gonna stand down. And then when they realize neither one is gonna stand down, then they’re- have to kind of work together.  It’s- I love the relationship.  I obviously just love doing scenes with Mireille, so it was fun. 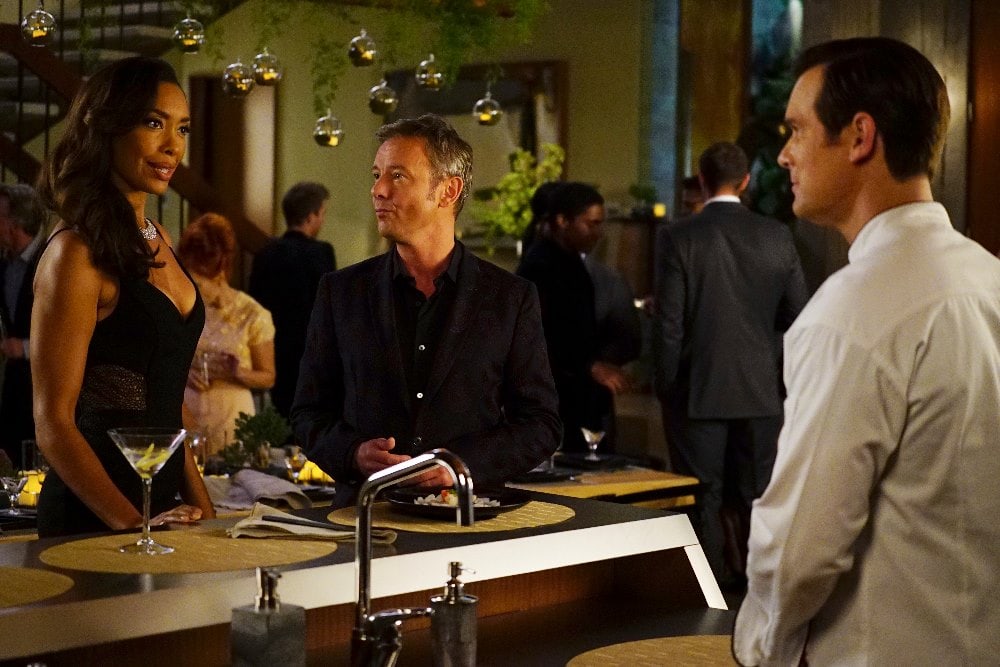 We had to ask where the title of the show came from. How did the show land on being called, The Catch. We turned to producer Allan Heinberg for that answer!

Before I came onboard, the show was already- a version of the show already existed and it was, I think, a reference to Alice catching Ben.  That was her drive.  But for me it was about love, like, you can’t have it all, like there’s always gonna be a catch.  The guy you fall in love with who turns out to be your soulmate. Well, he’s also the guy who stole all of your money and is a career criminal.  So, like, in love, it’s never the whole fantasy.  There’s always something pulling you back down to Earth.  I think a lot of us look at love as an escape from our daily lives and the catch is that what real love is, is something less romantic and a lot harder to achieve.  And so that’s the way we’ve been proceeding is, like, the- there’s always a catch with these relationships. How do you work through that? 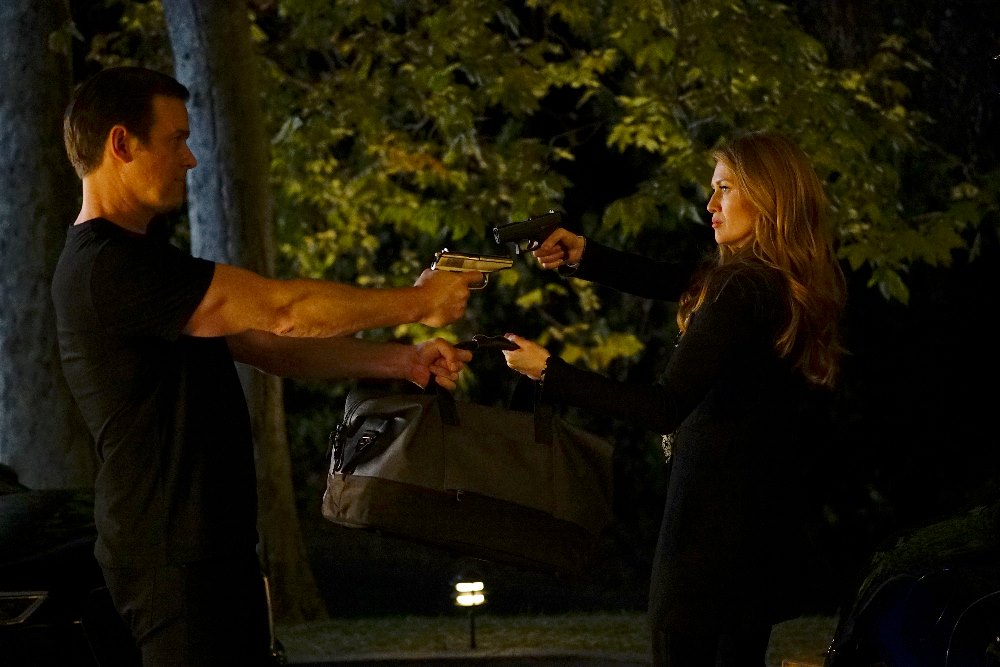 This is a show with MANY, MANY strong female leads. My group wanted to know if they guys were starting to feel outnumbered. Allan said they figured out how to balance it all out.

I think when we brought Rhys on full time, Pete Krause was like, all right, we’re okay now.  I’ve got my, my partner; he feels a little bit better. Now they’re sort of a comedy trio with Gina joining them this year. So, I think this year that’s sort of went away. But in the beginning, I think for Jay and for Pete, there may have been a little, like, there’s a lot of ladies.  I’m not sure that our side is being represented, and we used to have that on Grey’s quite a bit.

Pete just didn’t feel like he was… I’m like, you don’t understand.  You’re a fantasy.  You don’t get a point to be here?  [AUDIENCE LAUGHS]

But Pete, I mean, it is a duet, the show, I mean, really it’s an ensemble. I think the biggest change that I made was to give his character a point of view.  If you’d seen the original pilot, you’re in her head the entire time.  You have no idea what he’s thinking or why he’s doing what he’s doing.

The big change was act two of that original pilot is all from Pete’s point of view.  So you fall in love with him; you understand that he’s in love with her, like, it really is a duet in that sense.

But, yes,  we do have a lot of really strong women, but what a great message! 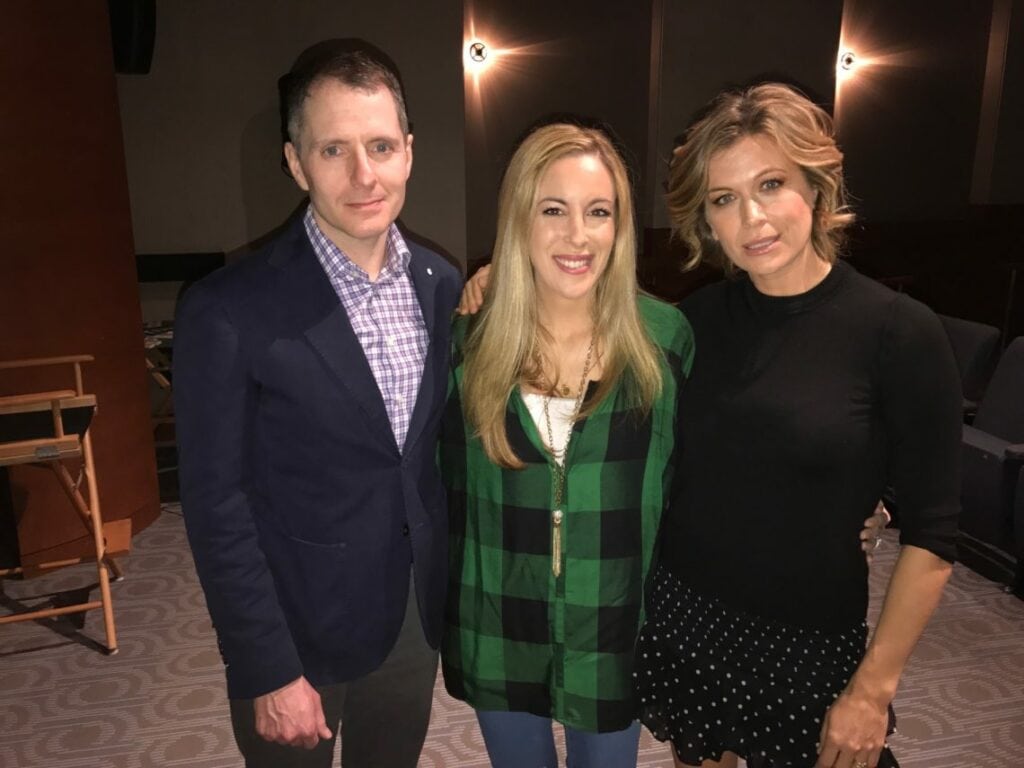 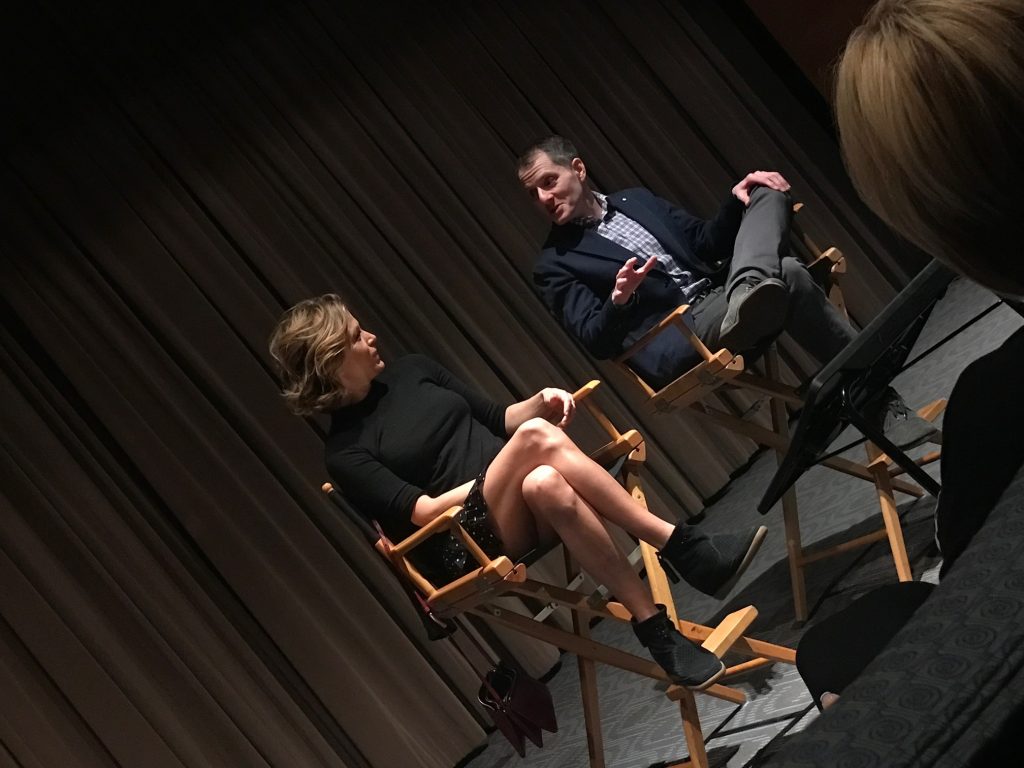 Margo has so many pieces to her puzzle. We literally find out more about her and her history with every passing episode. We asked Sonya if she has the full picture yet, or if she is learning it as we do. One episode at a time.

Sonya: Because I have the most collaborative showrunner in the world,  I have as much information as Allan has.  So if he knows, hey, you’re gonna hook up with so and so, and it may turn ugly… then that’s the information that I have.

Allan: I’ll try to be careful because sometimes giving an actor too much information, you know, if you know too much about what’s coming down the road if you’re not a genius actor like Sonya, you can- it’ll pull you away from the present moment.

So I think a lot of showrunners withhold in order to protect the actor to keep them present in the moment.  But because we’re cooking this up together, and because I want her as invested, and because her writer’s mind is so strong, I will usually- and I do this with Mireille, too, and with Pete, um, everybody really, if they’re interested in, in having that much information.  Like, I’ll tell them as much as I know.  I’ll tell everybody as much as I know.  And sometimes I’ll call from the writer’s room and say, this is- this is maybe a terrible idea, but what do you think?

Sonya:  I love it.  I’ve had both, honestly.  I mean, I’ve had showrunners who were, you know, the ink was drying as get the script pages. So, there was no heads up there.  That’s okay, too, truly!  You just keep to a very present, and you’re like, guess what?  In life, I don’t know what’s happening in ten minute’s time, so this is what I play.  It’s not terrible. I’ve also had the other where I’ve had all ten episodes ahead of time before we even shot a frame, to sort of process the whole arc which is more like having- doing a movie, say.  They, but they honestly both have their benefits.  There’s not- it’s not terrible to get, to get it last minute either.

Be sure to tune in TONIGHT to watch The Catch on ABC. Set your DVRs for 10PM EST.

*Disney invited me out to LA to intervie the cast and crew of The Catch. All opinions are my own. Travel and accomodations were covered.