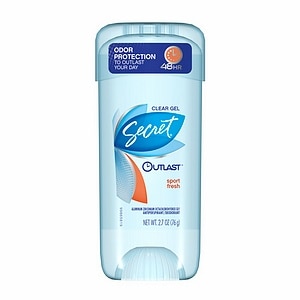 Secret Deodorant‘s newest offering is Secret Outlast with Odor Protection to last 48 hours. I tried it out for myself, to see if it lived up to it’s claims.

Secret Outlast has 2 times the odor fighters and helps stop odor before it starts. I’m going to get a bit personal so if hearing about my personal hygiene is likely to gross you out, you’ve been warned!

My days are very hectic. In an average day, I find myself running for the train at least twice. I shower in the morning, put on deodorant and shower again in the night. Wearing deodorant for 48 hours straight was a challenge for me so I was hoping I wouldn’t feel icky. I decided to try it over the weekend, just in case it didn’t work. I put Secret Outlast Deodorant on Friday night and left it on until Sunday afternoon. I can tell you that it actually worked! The odor of the Secret Outlast Deodorant is very subtle so it won’t interfere with your perfume. Mine was barely detectable. I definitely did not have an offensive body odor on Sunday night. Though I probably won’t be testing it again soon, I wear Secret Outlast Deodorant everyday and it doesn’t wear off. I feel clean and fresh all day.

Secret Outlast Deodorant lasts for 48 hours, even if you don’t want it to. It’s available at your favorite drugstore or by clicking here.

Does it have aluminum? I'm trying to stay away from deodorants with aluminum but it's hard when I was able to find only one.. =/ and it doesn't last. I'll give this a try. Thank you for the review.

48 hours is a LONG time.... thanks for the review I will have to check it out ~P&G Entry