When I was in high school, my friends and I decided to skip school and hang out with some drop outs in town. We made a few bad decisions and there I was surrounded by a group of older men that I really didn’t know. To make matters worse… I was under the influence. The music was loud. The people were seemingly nice and I wasn’t in class. Score. However, at one point, I saw my friend (with a frightful look on her face) attempting to escape the bathroom unsuccessfully. She ended up getting dragged back in.

I registered it, but couldn’t process it. I was so young and just didn’t understand what was happening. Again, I also wasn’t of my sound mind.

After a minute or two, the door flung open and I saw her attempt to run out AGAIN only to be dragged back in. I giggled and told myself that she was playing a game with someone. A bizarre game. Maybe she was in there with a boy she liked? Maybe they were teasing one another?

After several moments alone, my friend grabbed me from the back frantically telling me that we had to leave ASAP. I could barely walk but I saw she meant business. So, I got my stuff and followed her out quietly.

She grabbed my hand and walked me down three flights of stairs in silence. I asked her to slow down because I couldn’t keep up and kept losing my footing, but she didn’t care. We were on a mission to get to the street and when we did, she began to run. So, I followed laughing.

She stopped. She turned to me and started to cry hysterically.

“He raped me. I tried to tell you so you could help me, but you just sat there! Didn’t you see me? He put a gun to my head and he raped me.”

We began to run again and we continued to run without speaking until we got home.

The next time I saw that man… he put a gun in my mouth and told me that if I ever told anyone what he did to my friend that he would kill me. And you know what? I believed him because he had a reputation in my town. So, at 15, we stayed silent.  But you better believe that every single time it gets too quiet or things get too still… I see her and that moment. SO MANY YEARS LATER – I relive that moment.

Everyone has cracks in their lives. This is one of many stories I could tell you from my childhood. I don’t talk a lot about my past because I try to think of it all as happening to another person. She survived all those things. I am here to protect her. This is actually the first time I am ever telling anyone this story ever – EVER. I have carried this in silence for years. I have wept in countless showers over that simple mistake for years. And it didn’t happen to me – imagine what my friend feels like?

When I read everything about the Stanford rape case this week, I just about broke down because it brought up the very day everything happened to my friend. I remember how helpless we felt and how it became a secret that we’ve carried for decades and probably one that she will carry for the rest of her life. Perhaps she’s received counseling. Perhaps she’s told her family and friends… but she never went to the law. I know this for a fact.

Stories like these make me understand why victims don’t come forward and that narrative has to change. I don’t give a flying f*** about the rapist’s future. I actually am trying to find a little Jesus because I find myself wishing that he has the WORST 6 months in jail EVER. I know that isn’t the Christian thing to do. Every single time a thought pops in my head, I have to physically shake it out of my mind. Don’t wish these things on that boy. Don’t wish these things on that boy. It isn’t right!

But it isn’t changing and it isn’t getting better. Rape culture has created a society that doesn’t punish the assaulters. You can get put away from drug possession longer than you can for rape. How absolutely horrifying is that? 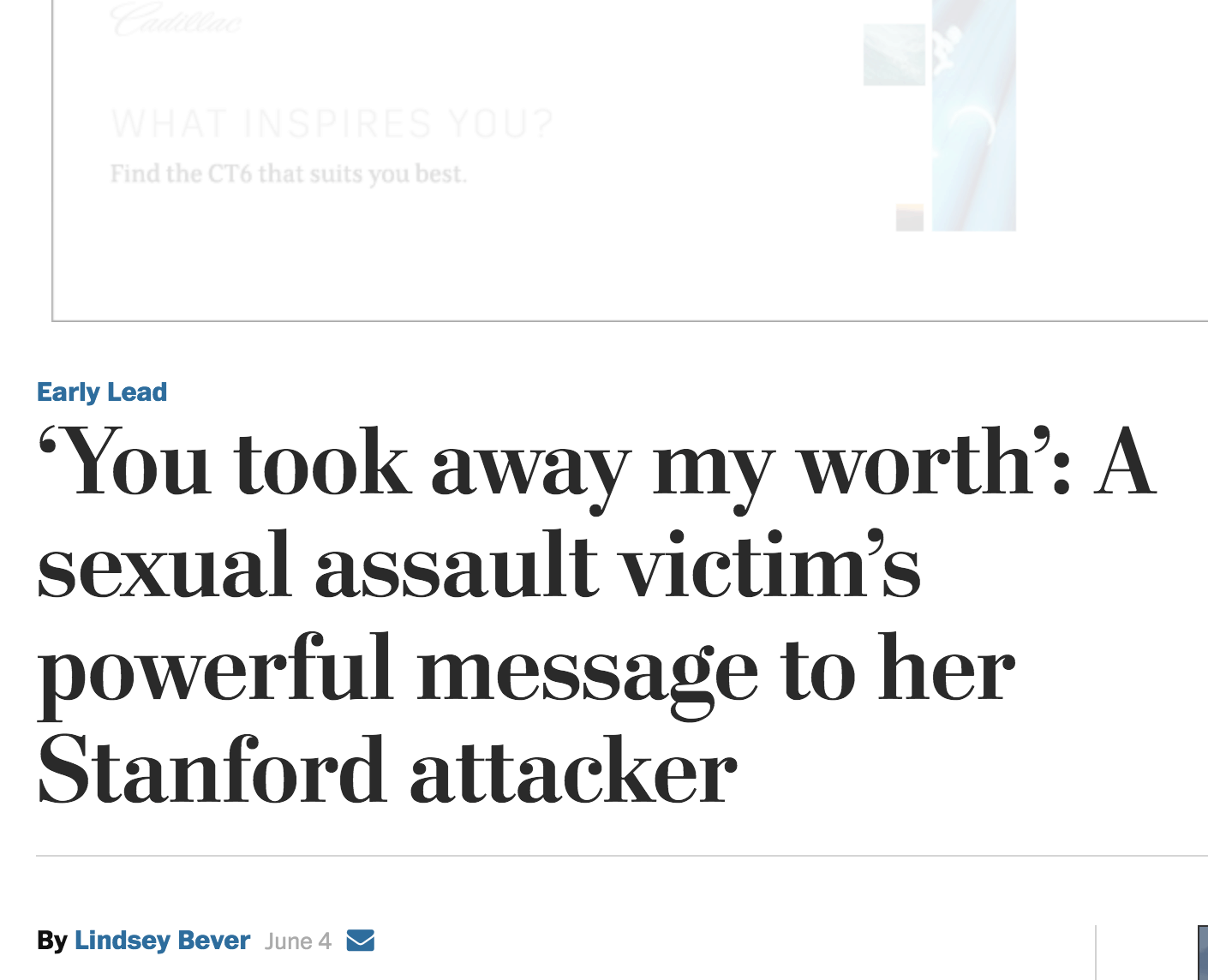 For every woman that comes forward, there are thousands that sit in silence. I said thousands. I meant it.

You sit next to a rape victim.

You eat lunch with a rape victim.

You read a rape victim’s blog and you don’t even know it… because they aren’t strong enough to say those words out loud.

So, when someone finally has the courage to stand up and try to actually do something about it, the law should be there to pick up the pieces. There should be no question. There should be no shock verdict. When a woman stands up after being violated, the law should embrace her with open arms because all women who are still broken and in pieces need that to happen. A loss for the Stanford victim is a loss for all victims – old, new and soon to be.

When will new laws be put in place?

When will the media do their part to stop sexualizing women in the press?

When will proper sex education be taught in schools?

When will appropriate and strict consequences come in play in order to deter future attackers?

When will the narrative change and what will you do to help the process?

What will you tell your daughters and sons about choice?

What part can you play in this story?

What charity can you involve yourself with if you can’t get your hands dirty?

How informed will you become with the issues?

When will we – as a society – be able to change this narrative together so that no other victim has to make the decision to come forward with their story?

It’s never too early too start.

It’s never too late to start.