Elle Fanning was absolutely charming when I met her during the Disney press junket for Maleficent. We asked her what it felt like to become a Disney Princess and to work alongside Angelina Jolie. We even got her to open up about her favorite scene to film and more.

Last weekend, I posted my exclusive interview with Angelina Jolie and today I get to share the conversation I had with Elle Fanning. What an adventure! As you know, Disney invited me to LA to attend a press junket with some cast members of Maleficent. I was able to preview the movie (in 3-D I might add) and get personal with some major names! 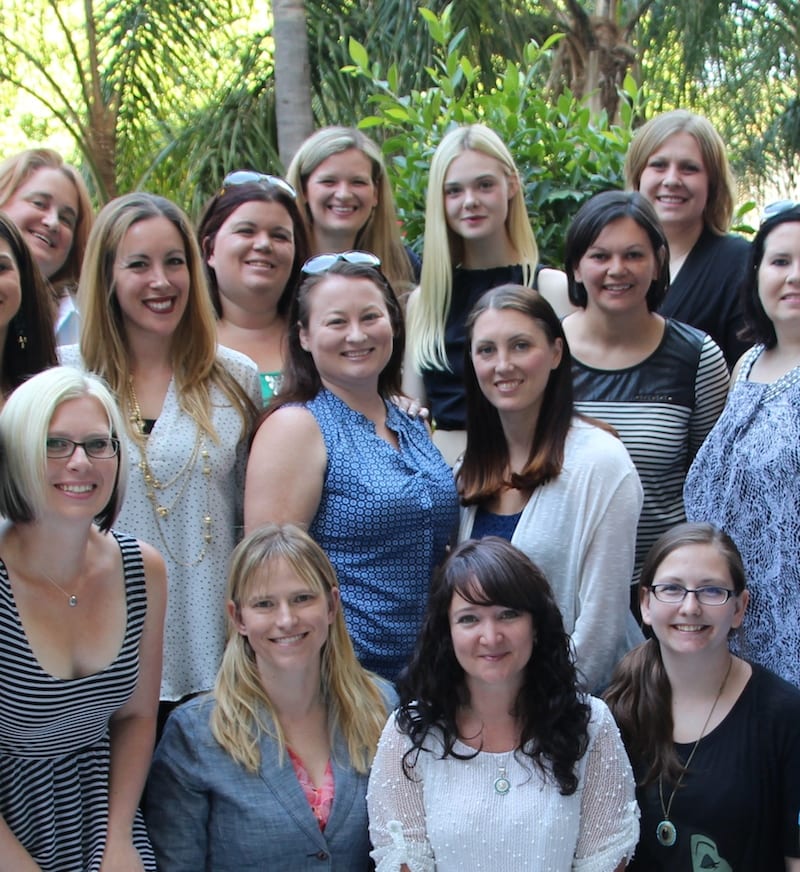 My Exclusive Interview With Elle Fanning For Maleficent

Elle Fanning plays Aurora. Here’s a little secret about Aurora — that was my daughter’s name for many, many years. When I was a young girl, I decided that I would name my daughter Aurora because it was just the most beautiful name I had ever heard. My mom has a baby name book and if you look at it today you will find Aurora circled with a star! I was simply entranced by ‘Sleeping Beauty’. She was everything and anything I’d ever hoped for in a princess.

For Elle, the feeling was the same. When asked what was it like to take on the role of a Disney princess, Elle said it was an absolute dream.

It was my dream. When anyone asked me what I wanted to be when I grew up, I would say, “A Disney princess,” because that was the ultimate goal in life for any young girl. Especially Sleeping Beauty. She was always my favorite because I felt like I looked like her the most.

I would go to Disney store and I would buy her clothes and her shoes. So, to get to play this her… it’s really a dream.

Now… Aurora has some big shoes to fill, right? This is SLEEPING BEAUTY!

Did Elle Fanning feel any pressure while preparing for Maleficent?

Yes. Obviously I watched the animated movie many times because I wanted to do it justice and because I feel like that Sleeping Beauty was done so perfectly. I had to live up to that! I did watch the animated film right before I started filming because she has a certain physicality. She was drawn a certain way and she holds her hands in a particular manner and has these little gestures.

At this point, Elle lifted her wrists and flicked them in a way that immediately made me think of Aurora. I hadn’t thought of that slight detail, but obviously, she did. In an instant, she became Sleeping Beauty by making the slightest changes. It was amazing.

I tried to bring that charm to the role. But in our version, she’s not just a delicate princess, you know? She has some strength and she actually shows real emotion. She gets sad and feels betrayal because a lot of secrets are hidden from her. It was nice that we could make her more human than just the cartoon. 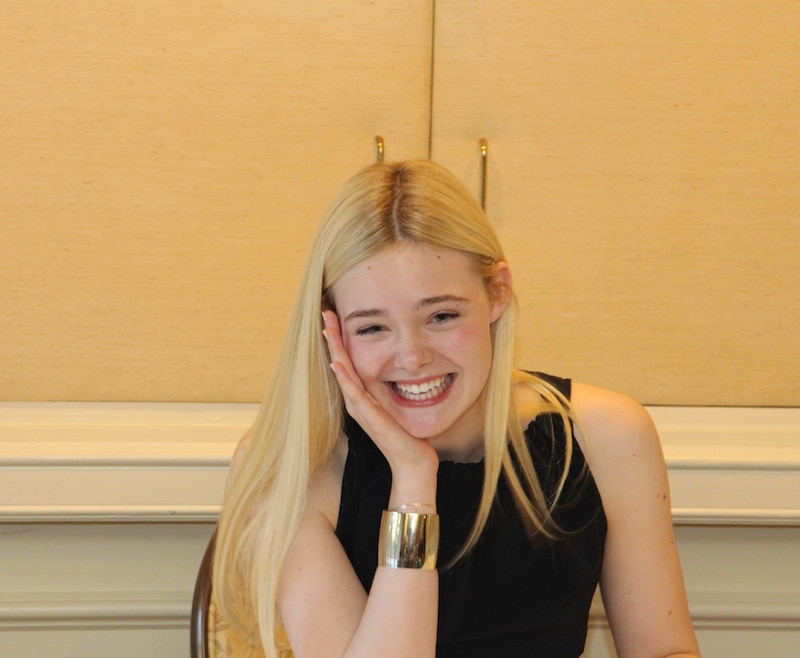 Sleeping Beauty lives in a world that is very isolated and untouched. In some respect, she is rather naive, but Elle keeps her very believable and possible. The audience is able to stay attached to her.

Thank you. I, I tried to do that because I know, it could get boring if it was always just the girl who is happy and doesn’t know anything, you know? She’s also kind of desperate to learn and she’s trying to figure things out. I wanted to show that but also show that she hasn’t been taught to be scared yet. She doesn’t know to be scared of things that look different.

So, when she does see Maleficent, she’s not scared of her, which is very strange for Maleficent. Normally, everyone’s so terrified of her, but this little girl isn’t. I think that’s what makes them have this bond that they do.

Elle hadn’t had the opportunity to see the film in full 3-D form and couldn’t wait to see it all buttoned up! It’s so funny that actors don’t get final cuts ahead of time, right? I always assumed that they get rushed advanced copies.  We asked Elle what her favorite scene to film in Maleficent was and it was a classic —

Mine was when I pricked my finger on the spindle because it’s such an iconic one.  When I think about the original, that’s the scene I think of. It was the very last day of filming when we shot it. Everything was building its way up to that monumental moment and I felt like I wanted to do it right because that scene impacted me a lot when I was little.

It scared me more than Maleficent did because of the way the lights were and it looked like Aurora was morphing into Maleficent, like, with that green and purple light. So I was like, “We have to have those lights.” 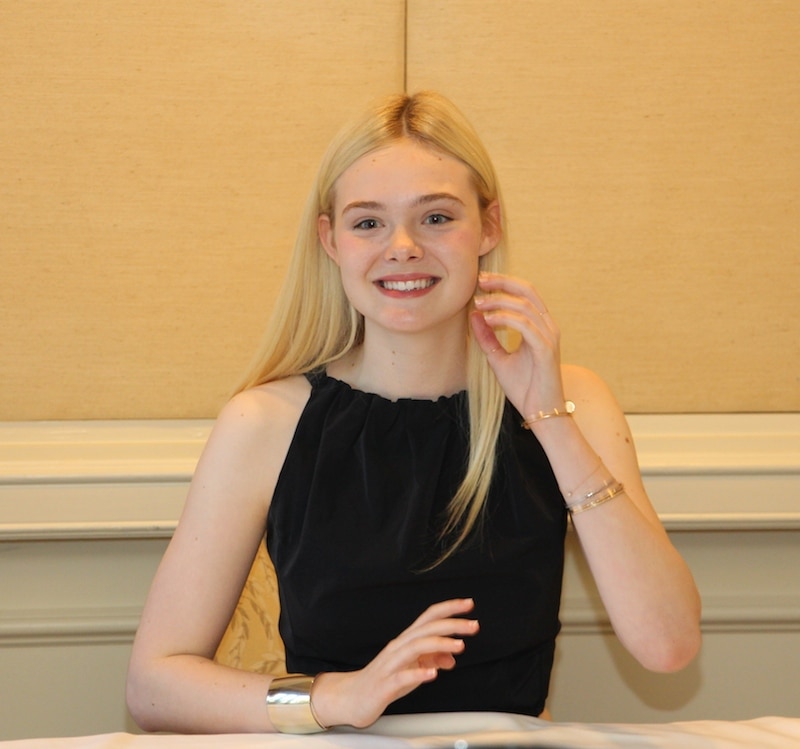 How did Elle land this role!?

I have to be honest with you. From the moment Elle Fanning walked in the room, I saw Aurora. Her answer really isn’t that surprising.

It’s funny because it all happened really fast. A lot faster than things normally do. I heard there was going to be a Maleficent movie which was from the villain’s point of view and thought that there has to be an Aurora in there. So I was like, oh my gosh, I hope I get it! They asked me to come in –  the director Rob – for a meeting. So, I met with Rob and Linda the writer – who also wrote Beauty and the Beast. I was excited to meet the person who wrote Beauty and the Beast too!

I went and had a meeting with them and we just talked. I think they just wanted to get a sense of me, They didn’t describe much of the story because they kind of already decided that they were gonna give me the part. So, they told me in there that I got it and then they handed over the script. I read the script in the car and got motion sickness but I did not stop. I just kept going. I was so excited.

Let’s talk special effects! The fairies were really tennis balls. How can you be so true in those scenes? It’s all green screens and stage props.

I know! It was a lot more than I’d ever done before. You’re on a set so there is a stage and things are built on it, but all the little fairies…  those are just tennis balls or little lights. And there’s like green and blue screens that you’re basically standing in, so you really, you have to imagine everything.

You want to make sure that you’re still playing your character but you still have to be aware  of it all. The hand that you’re holding, but you’re not holding a hand, it’s air. So you have to think about how would I hold it if it was there?

We also had to do all this scanning. Whenever you had a hair change or a wardrobe change, you stand on this turntable and stand completely still and they turn you inch by inch and scan your body.Then that makes a virtual you  and places the image into a computer and then they can take that virtual you and put you on-screen. So, all the floating and stuff, a lot of that was manipulated.

Last question!! A princess without singing! Did Elle Fanning feel bummed about missing out on debuting her chops in Maleficent?

I know! I was thinking about that! I was like, I’m surely gonna get to sing! Lana Del Rey, she sings that song in our trailer, and it’s so perfect. Our movie’s more gothic, you know? It’s nice to have her haunting voice. It’s a different take on it than just the original one.

MALEFICENT is rated PG and releases in theaters everywhere on May 30th! Your children are going to LOVE IT! My kids cannot WAIT.

* Disney flew me out to LA to interview Angelina Jolie. All flight and hotel accommodations were covered.

I had a friend in middle school that was named Aurora. I always thought of Sleeping Beauty because of her name!

I loved the little twist of her hands! Like you, I noticed that it immediately seemed to transform her into Aurora. She just seemed to be made for the part.