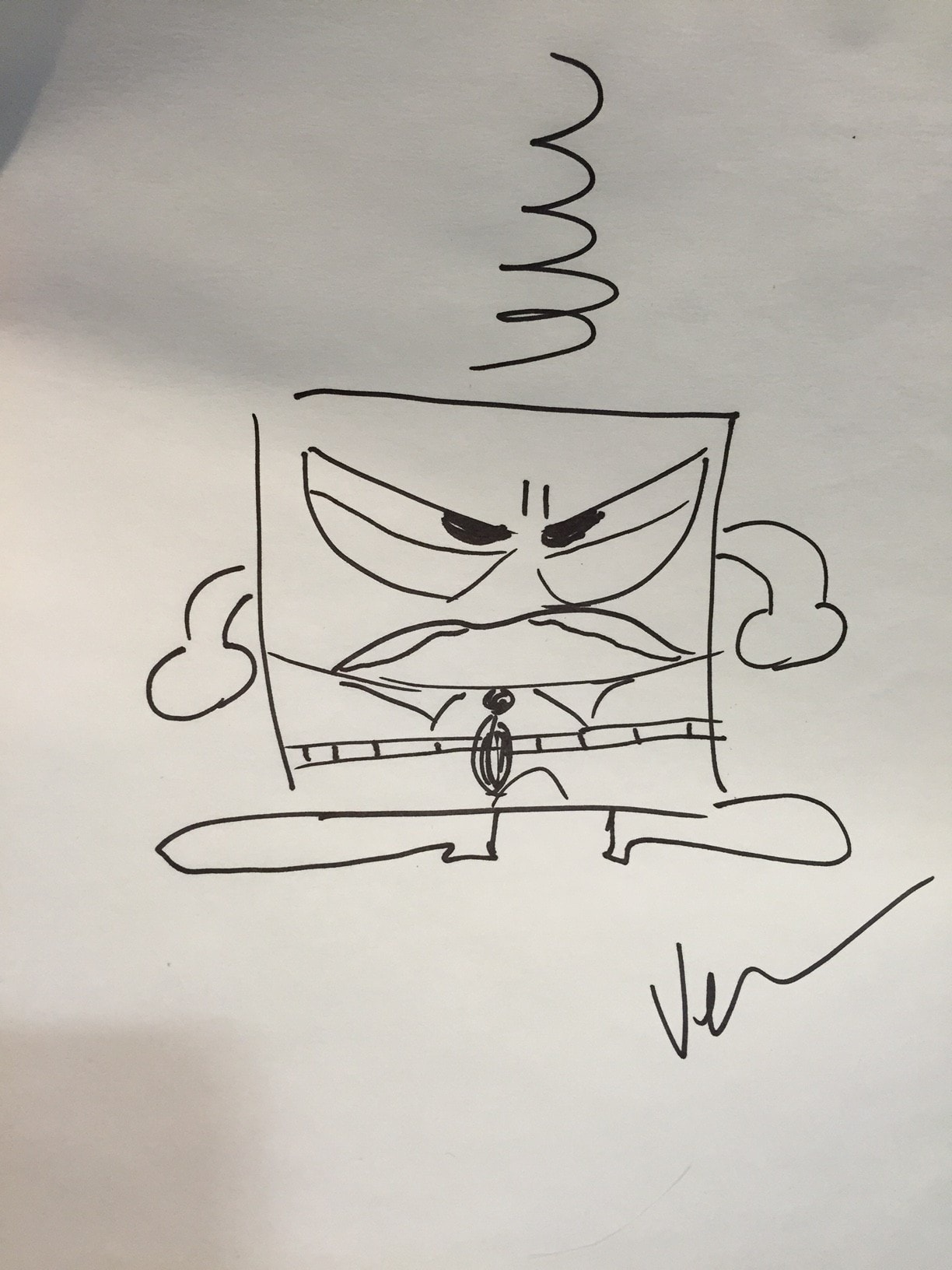 Listen, I’m an only child. I need to start with my photo first. I know. I know. I learned a ton of information from both Story Supervisor Josh Cooley and Co-Director Ronnie del Carmen… but I haz skills and I need to show them off.

I hear you… “Don’t quit my day job“.  But you can TELL that’s ANGER, right? I mean – if I flashed that picture in front of your face, you wouldn’t second guess it. So what he’s in heels! So what his tie is a bit off centered.  So what he’s wearing a baseball cup (what’s the actual term for that – you know I’m not sports-y ).

I enjoyed it! I loved hearing tips from both Ronnie and Josh as they walked us through the process of creation during our Inside Out junket in San Francisco. These are the guys that conceptually created the characters. They are the ones that sat down and hashed out that Anger should look like a brick and be red while Disgust should feel more like broccoli. 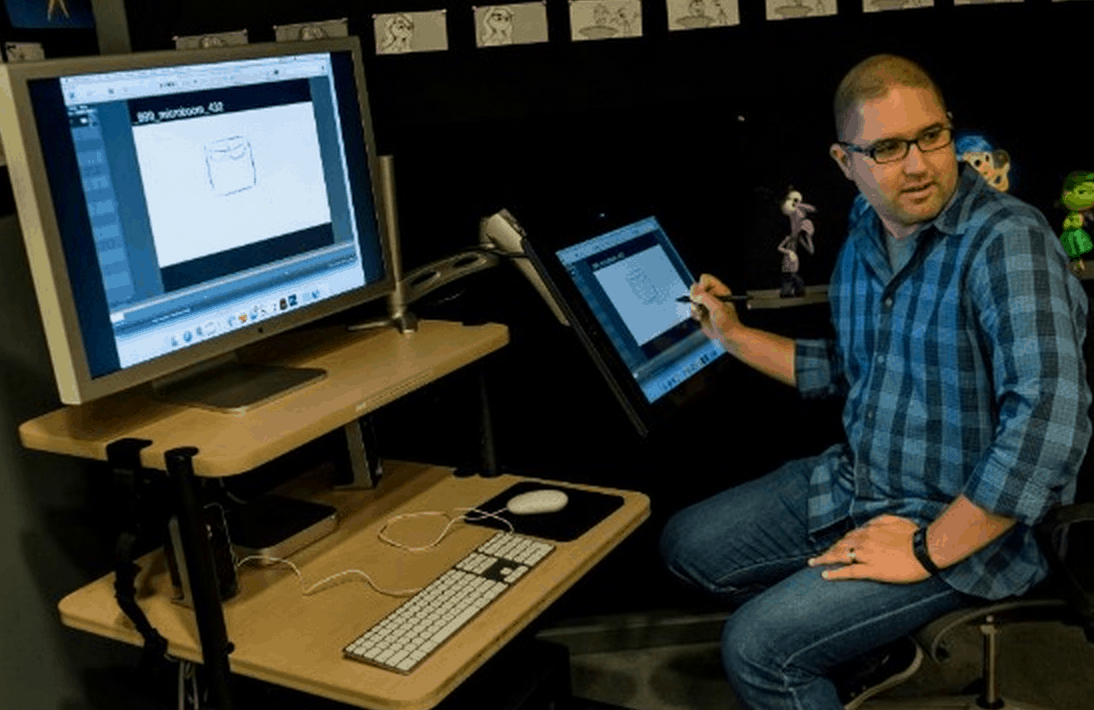 And to get to that point, guess what they did? The team would draw things. Typically, they would start with each other. In the room, there were dozens of photos of the team – magnificently exaggerated of course. But by doing so, they were able to take some traits from their new creation and mold it into a brand new being.

I had a mom in my group who had a child who wanted to become an animator. And she asked the team for some advice — what should her daughter do to step up her game?

We heard the best advice EVER! And it was completely opposite of what I thought it would be.

Co-Director Ronnie del Carmen said to sharpen his mind and get creative, he would go to a park or a crowded street and people watch. He would draw his own drawings. He didn’t spend too much time trying to draw things that already existed. Sure, it was fun to try to create Mickey or one of his favorite villains… but the magic is when you design something entirely on your own. Start from scratch and go at it alone. 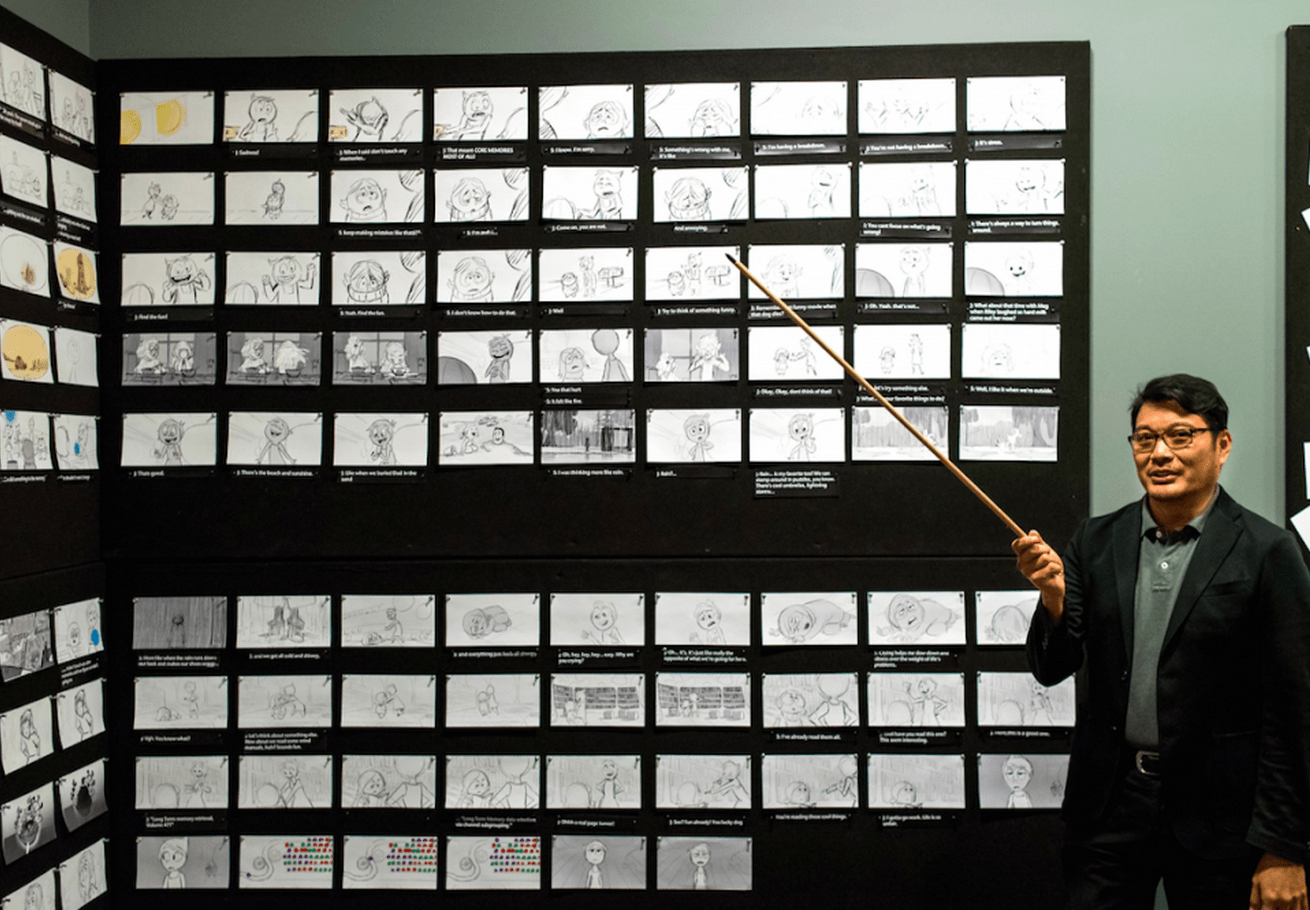 While making scene sequences, the team would have to come up with hundreds, thousands, tens of thousands mini drawings during the course of this campaign. Some made it into the film of course. Others (and when I say others… I mean almost all of them) did not.

Never get discouraged. Just keep drawing. It’s not insulting or defeating when one of your sequences don’t make it in. It just means that it wasn’t right for this particular project. It was still beautiful. It was still yours. I thought that was very powerful. Something to take away and use in every field really!

(PS when you pitch your storyboard to the group you literally have to act it out which I thought was funny. Some of these animators didn’t seem very… animated. But they had to come to life when they were trying to sell their vision. So, no matter what “behind the desk” job you have at Pixar / Disney… you still need to sprinkle some Pixie Dust on your work every now and then. 🙂 ) 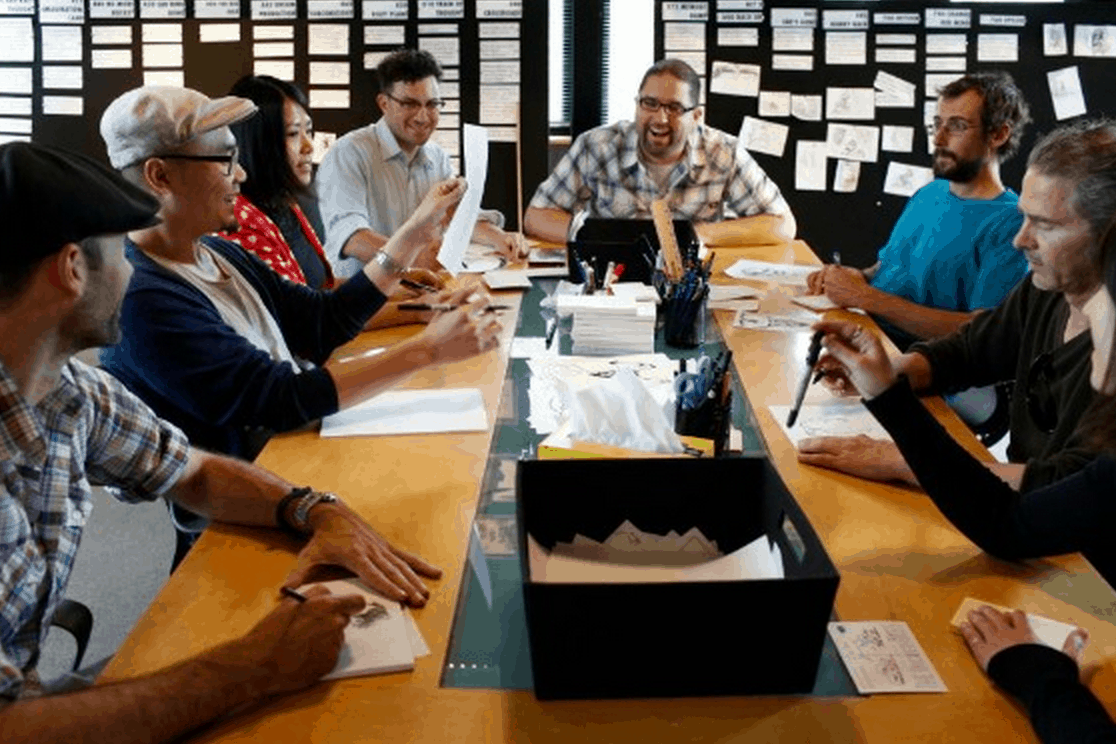 SO — how did the team come up with these story board ideas???? They talked about their LIVES. I mean – why NOT? They are all from families. They all have funny stories to share about their children or from their own childhood. If one was visual enough, they gave it a shot.

What a bonding experience!

I’m telling you. These trips out to Pixar and to Disney are so SPECIAL to me because I really get a true understanding of the people behind the blockbusters. Yes, Inside Out is going to be amazing. I cannot WAIT to see it this Saturday with my daughter and 20 of her closest friends for her birthday party. But when I do, I’m literally going to be thinking about all the people I’ve met along the way and what PRIDE and JOY they must be feeling now that their baby is stepping out to meet the world.

This one will be a classic that even our grandchildren will enjoy. Mark my words.

Inside Out hits theatres on June 19th!!!

* Pixar and Disney invited me to San Fransisco to interview to team members of Inside Out. All opinions are my own.