Sit down with actress Lily Collins, the stunning young star of Mirror Mirror and it’s impossible to not notice two things: her creamy skin – unusual for a Los Angeleno — and her very full eyebrows.  “It’s the quirky things that make people beautiful,” asserts the 23-year-old Collins, when asked about her unconventional look. (She also admits that when she was younger, she didn’t appreciate her eyebrows at all. “I plucked them but then couldn’t wait for them to grow back,” she said.)

Snow White, as played by Collins in this film, is not your typical princess, either. Collins’ Snow White is a sword-fighting, ninja-flip-turning warrior who takes on men, monsters, and a manipulative queen (played by Julia Roberts) to win back the kingdom that is rightfully hers. And she rescues her prince charming (played by Armie Hammer) while she’s at it. She is all girl power but in a very glamorous package.

The movie is just beautiful to watch.  Even though Snow White is a tough cookie, she is elegantly dressed in most of the scenes: 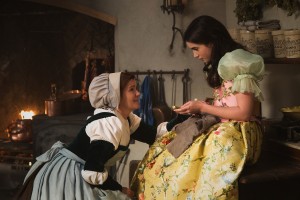 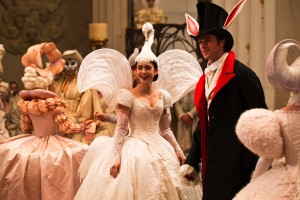 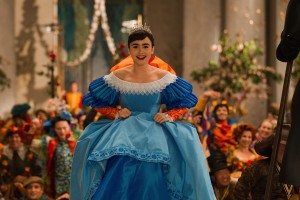 Collins’ said the blue and white dress was her favorite because it’s a modern take on the traditional Snow White dress. “I love the colors and the big orange bow,” she said.

It’s refreshing to meet a young celebrity who seems so grounded. Collins is smart, articulate and gracious — she would make any princess proud.

p.s. Fashionistas of all ages will want to checkout Relativity Media’s fun and free app thats’s a technological take on paper dolls; it features many of the costumes seen in the film. The film also has a Pinterest board for those who want to take a closer look:  https://pinterest.com/mirrormirrorpin/