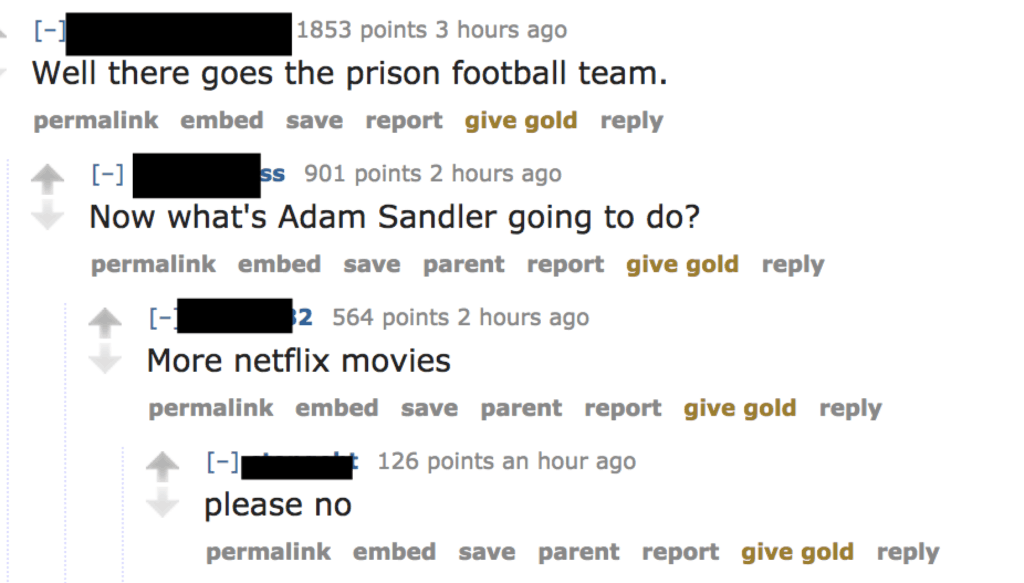 We lived in such a messed up time. If you and I were speaking one on one, I would have said that statement with a little more dirt between the letters. But since this is a place of business, I’ll keep things clean and tidy. Every day, I wake up, go to my favorite sites and catch up on the news. Typically,

I read about terrorist bombing or car drivings or knifings. They change things up to keep it fresh.

I read about issues in our schools – whether it be about bullying or our failing methodologies.

I read about how our President is literally uprooting whatever he chooses to change on a daily basis. Executive orders fly out the White House windows faster than we can count them.

And then… I read the comments that people have regarding these news articles.

Can I be honest with you? I spend most of my time in the comments. I can take the news at face value. I consume it, make my own opinions on it, filter out the media bias regarding it and then move on. But what trips me up is always the response section. The part of the web page that is under the article. The underbelly. A true representation of who we are as a people. Not the fake facade we put on while at parties or while we are engaging on Facebook with our real account names. I’m talking about when we are on forums with random identities – the moments we can say and do whatever we please. Those moments. They are the ugliest of them all.

I am a huge fan of Reddit. In fact, it’s probably the only news aggregator that I use. However, there is definitely an agenda that is trying to be pushed out and it is slowly turning me off because I really like to read sites that allow me to form my own opinions. Just give me the facts. Don’t skew news. Don’t scrub news. Don’t filter out news just because you are trying to fit a narrative. That enrages me.

This made me move onwards and outwards and attempt to find another news aggregator that would act and feel the same and I stumbled upon 4Chan. I lasted 20 minutes. It was one of the most racists and hateful spaces I have ever seen online in my life EVER. I was disgusted – instantaneously. The “n-word” thrown around like candy. What flipping century are we living in? I couldn’t give them another pageview. I was horrified. So, back to Reddit I went. I know their faults and I deal with them because I am intelligent enough to do so.

But the comments – while they aren’t as racist as 4Chan – are just as unloving. Social Media has desensitized us. Nobody on Reddit is allowed to straight up offend anyone over race which is a huge win. But anything else is fair game.  And today, it was announced that Aaron Hernandez committed suicide. He was serving a life sentence in prison. He was a murderer. People have hard feelings about that. I’m not saying this man deserves a parade. But to read the comments about a man who committed suicide and to feel the lack of empathy that these people have for him and his family, it just breaks my heart. Again, he was a murderer – I KNOW THIS! I’m not STUPID. But he was serving a LIFE SENTENCE. That is a proper consequence as deemed by the law and judicial system. They decided his sentence and he was slated to live it out for the rest of his life. He got what he deserved. To poke fun at suicide – especially suicide – I don’t know… it just doesn’t sit right with me.

My friend committed suicide for a very personal reason – one which I won’t disclose. I still think about him. I still think I see him. It haunts you. Suicide is the ultimate betrayal. His daughter will never get to know him. I understand Aaron did all of this to himself. I understand that he murdered someone but he was still someone’s father. You have to see that. To make jokes at something so seriously sad, I just don’t know how we got so far off our path? So desensitized. Aaron wasn’t a thing. He was a person. People who comment online – I think – tend to forget that.

Even with the bombings that are happening overseas.

Even with the chemical warfare.

Even with the school shootings.

Even with the terrorists that we are fighting.

In the end, they are all still people. And memes and jokes and funny graphics about their demise that glorify their end…. make us lose ourselves in some way. What happened to compassion?

I think the problem is that we know too much. Bombings and terrorist attacks aren’t really news anymore because they happen all the time. No one is shocked. No one is surprised. So, when you lose that emotion, then there is room for other emotions to replace it.

Another probable cause – people are trying to get noticed and gain followers. So, they push boundaries. They try to become stand-up comedians and draw people in with their dark humor. Actually, I have a feeling this is the real cause of it all. Is it worth it? To sell your soul for a bunch of RTs or Reddit upvotes? Some actually might say yes.

There’s no turning back from this because Twitter, Reddit and Facebook want to try to make the most money possible. If they remove these kind of jokes, then they will lose half of their page views! It’s all about that bottom dollar. I guess if you follow the trail long enough… it always end up at the bank.

So, what can we do? I don’t know. If you are reading my blog, odds are you aren’t someone who would like or RT something like the above anyway. I think it is our part as mothers to have a talk with our children and teach them that we have to continue to be true to who we are – even online. We have to always represent the best versions of ourselves – online and off. Sharing messages like any of the above doesn’t help anyone. Aaron left behind a little girl who will eventually find these tweets about her dad. How will that help her? She already lost so much. This is such a horrible story. There is so much loss and death and hate and terrible mistakes riddled throughout it. Let’s teach our children to not contribute to the mess in any way. Let’s teach our children to do better.