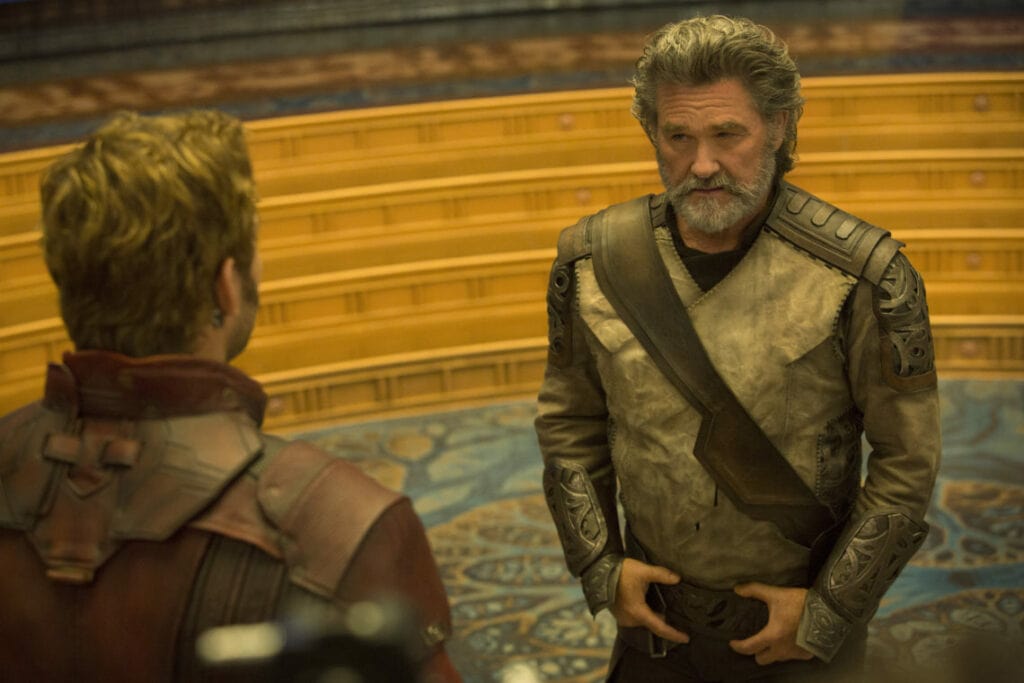 Kurt Russell’s EGO did exactly what he intended to do to Guardians of the Galaxy fans. Listen, don’t read this exclusive interview unless you’ve already seen the movie because there are going to be a few Guardians of the Galaxy spoilers. I’m warning you. I usually don’t like to write them, but I can’t figure out how to talk about Kurt Russell’s EGO without dropping a few. So, just know that you have been officially warned, and if you leap off this first paragraph … then I will not be held responsible for what you read.

How’s that for a disclaimer?! 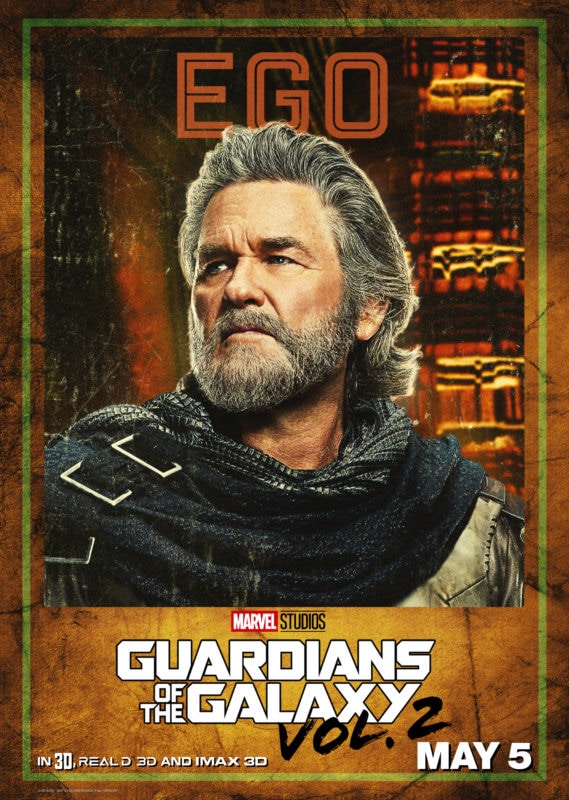 When Kurt first found out that he was being offered the role of Peter Quill’s father, he was a bit concerned. He didn’t want to take it unless it was done right. After all, Kurt understood the gravity of this character’s relationship.

I was concerned that the audience would go in thinking, “oh great, this is just right!  We’re so happy that he’s gonna have adventures with his dad and it’s Kurt Russell and he’s working…and I hate this movie.”  [LAUGHTER]  “Kurt Russell’s responsible for killing this for me.”

And I said, I just wanna make sure we hit the right notes here, James.

I said, “it has to have the right amount of comedy.” Anyway, we started talking about it and I felt very comfortable with James.  I thought his hand was really solidly on it.  He really knew what he was doing.  And then, of course, working with Chris, primarily, that was just right.  I just…as soon as Chris and I saw each other we just kinda smiled, gave each other a hug and said this is- this is clearly right.  So that was kind of the early stages and the first processes of it.

RELATED: The Women of Guardians of the Galaxy Vol . 2 – Exclusive Interview 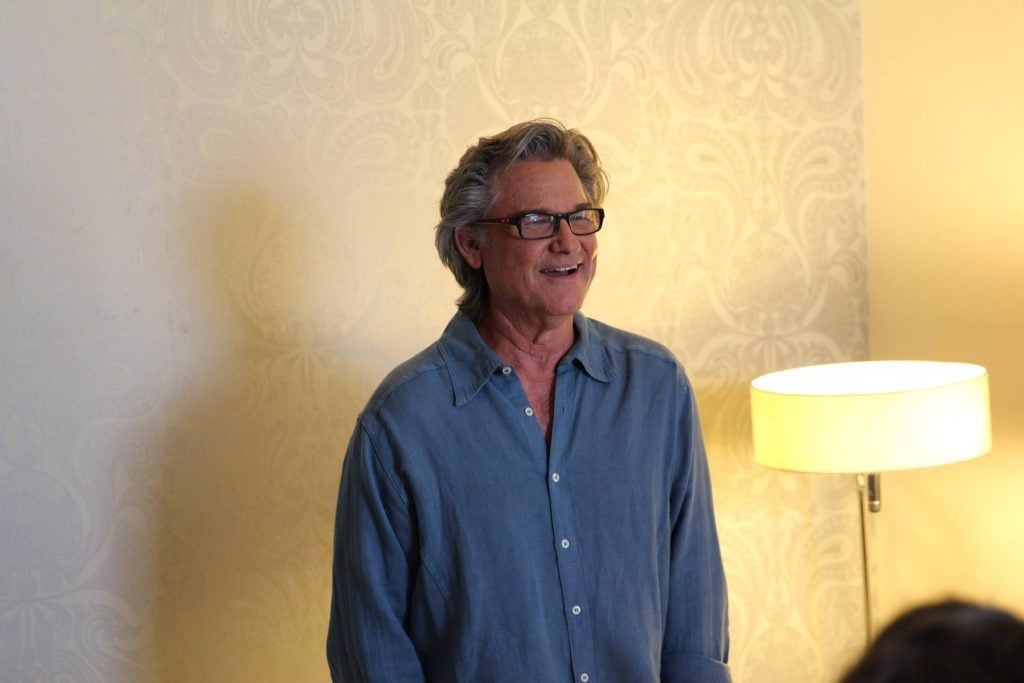 Kurt Russell’s EGO is a bit different from his last few movie roles and that was an intentional choice. The actor likes to keep people guessing.

I think the trick is, and what I’ve tried to do all my life is, I was just an actor who didn’t wanna do the same thing.  I just didn’t- it just- for some reason that just repulsed me.  It made me not wanna do it.  And then in Hollywood, if you have something that’s successful, the next thirty scripts you read are gonna be in that zone.  So I disappointed a lotta people by saying, I get it.  I get why you want me to do it.  But, if you’ll notice, I just did that.  I don’t wanna do that now.

And in saying that, and in doing that you create a confusion, and a whiplash sort of career where they can’t pigeonhole you, but they’re not necessarily happy about that.  Even critics and reviewers are not necessarily happy about that.  They have a- we have- I guess a tendency is, human beings, too, if you see something, like it and then wanna see more of it.  That also applies to whole movies where you see a movie you like so let’s do it again.  We haven’t- you know, let’s do Overboard again.

Let’s do Big Trouble In Little China over.  Let’s do it again.  Let’s do Escape From New York again.  Let’s do Tombstone again.  There’s only- they’ve only done fifty-six Tomb- Tomb- forty-five I think, or forty-six of Wyatt Earp and Val- Doctor- Doc Holliday thing.  So my job was to skip around genres.  Skip around characters.  Find stories that I liked, that I wanted to see.  Characters that I wanted to play. And try to challenge myself with giving the director as many options as possible with takes so that he could, or she could, put the movie together and have a lot of options to choose from.

When you do that you, you know, you kinda take that and you’re putting a lot of trust in the director.  The other way of doing it is you sort of give him one thing, which is not to say you don’t do that.  Miracle was a movie where I, you know, had to get in character and then you stay there.

And I think there’s room for both, and I’ve done that.  You know, I’m just skipped around genres.  And I really enjoy that.  I just – that’s what keeps me going. 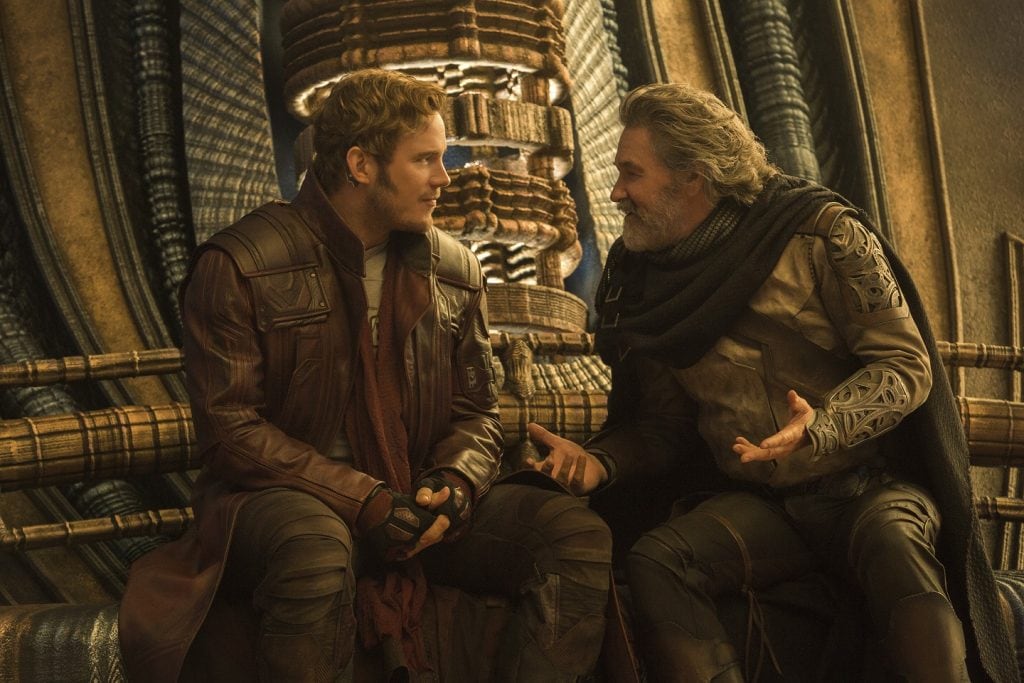 The Power Of A Name

Guardians of the Galaxy has such tremendous talent with such incredible leads! Kurt Russell’s EGO was one of them, for sure! We wanted to know how much he saw himself in that particular role.

I got a healthy ego.  [LAUGHTER]  I do.  I think that’s important in our industry and our business and as a human being to have control of your ego.  But I think you should have a healthy one.  If you don’t have a healthy one you’re gonna have other problems.  Ego is…I love names and characters.  You can go back through my litany of characters and you’re gonna find at least twelve great names.  I think that’s important.  And if they don’t have a great name, I give ‘em a great name.

I was very disappointed with when I read this, the character’s name was J’son.  Jay-son.  And I said, yeah, well fifteen Marvel people will know who this is.  That’s a weak-ass name.  And then- and then later on being to find out that well actually his name is Ego the Living Planet.  And I went that’s more like it.  [LAUGHTER]  So how much of myself is there?  I don’t know.  Listen, if you’re gonna play God let’s go big.  [LAUGHTER]  You know, so I think this movie has a lot to say about that.

I mean it’s such an obvious thing when you literally- when he’s- when you first meet him and the first thing out of his mouth is, my name is Ego.  He’s very proud of that and you gotta understand that he’s made everything in his life.  And so he’s chosen to be that. 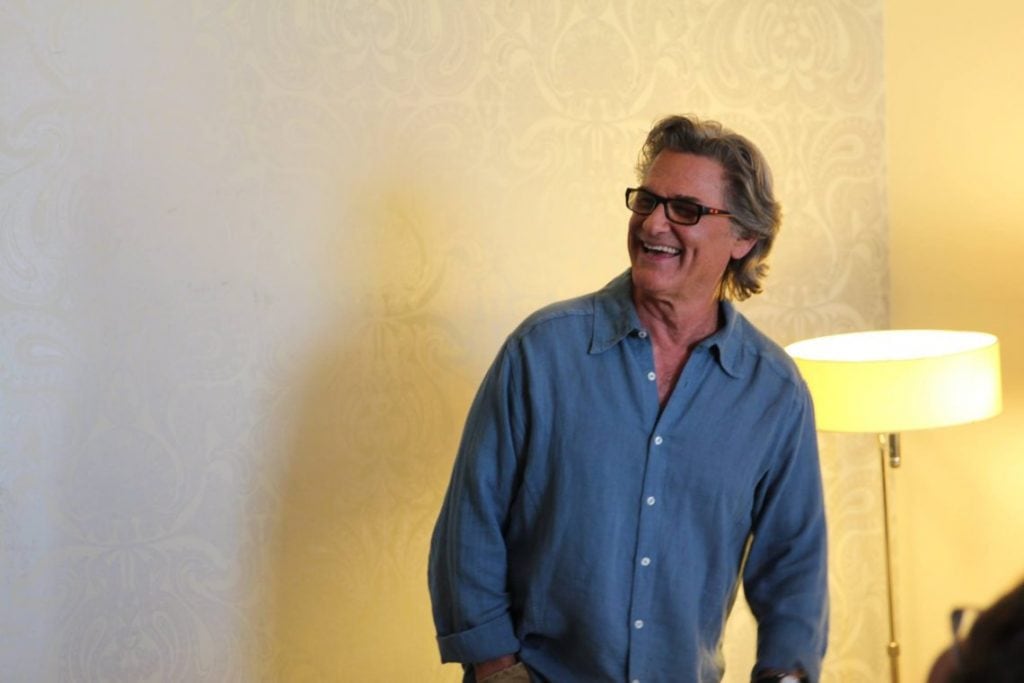 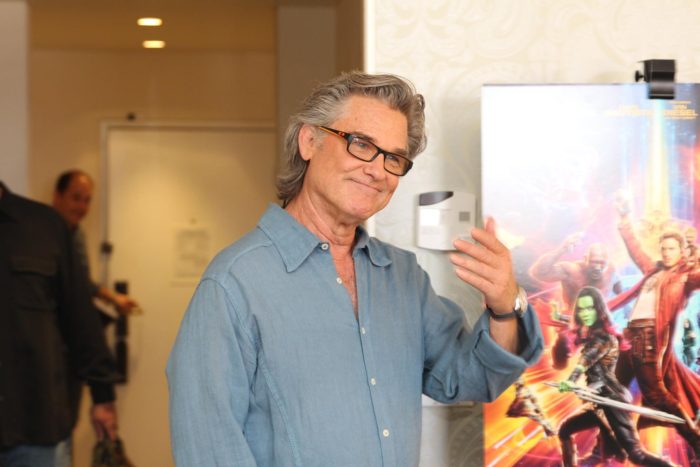 The last time we interviewed Kurt, he mentioned that he didn’t really enjoy filming with a green screen. We asked him what he thought about the final product now that it’s all done.

Those are big spaces.  What wasn’t there was like a room like this with twelve glasses in it.  And gee, I wish I’d known those were gonna be there, I woulda knocked those outta the way when we went over- were fighting.  It would be great to go through those.  Or I cut myself.  A million things you can come up with, you know.  That big wide like, Hey!!, like oh Jesus.  Right.  I didn’t know it was gonna be there.  So that’s what I was talking about.  With this movie, mostly it’s backdrop.  It’s, you know, we had enough there to kinda, you know, give us what was goin’ on.  So it was nice to see the movie because you can see the pictures when you’re working.  But it’s nice to see the finished project when I saw that. 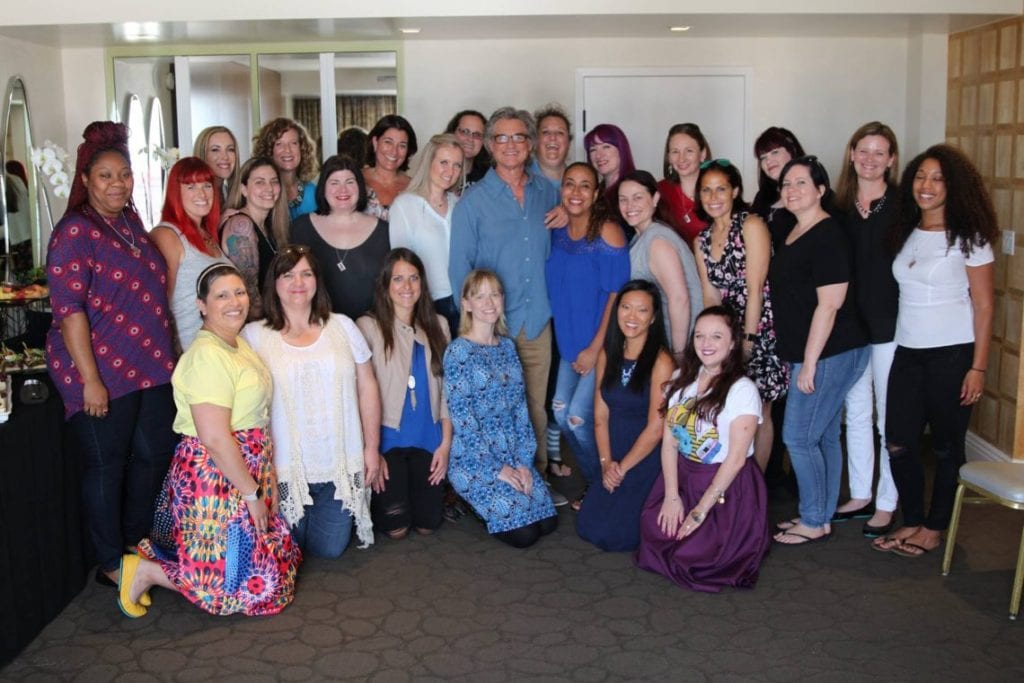 Guardians of the Galaxy Vol 2 is out in theatres RIGHT NOW! You don’t want to miss it. Kurt Russell’s EGO definitely leaves his mark on this one.  Some really emotional scenes involving this actor … and also some kick ass fighting ones as well. Be sure to grab your tickets today!  Read my movie review or check out my toy guide before you go!

*Disney invited me to the premiere and to interview the cast of Guardians of the Galaxy Vol 2. All opinions are my own.