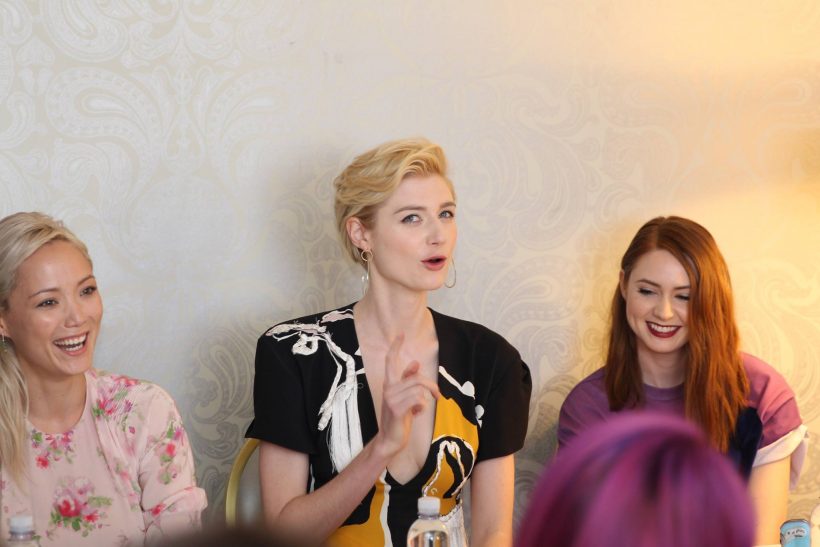 Female power! Still can’t believe that we had the chance to sit down with Karen Gillan (“Nebula”), Pom Klementieff (“Mantis”) AND Elizabeth Debicki (“Ayesha”) from Guardians of the Galaxy Vol. 2. I mean – what an interview! The sequel definitely brought more feminine energy to the big screen. From the soft-spoken and innocent Mantis from Guardians of the Galaxy or the all knowing and perfectly-imperfect Ayesha. I thought they balanced each other out! But all those on screen battles were just for show. In real life, this trio were great friends who had one thing in common, a true love for the Guardians. 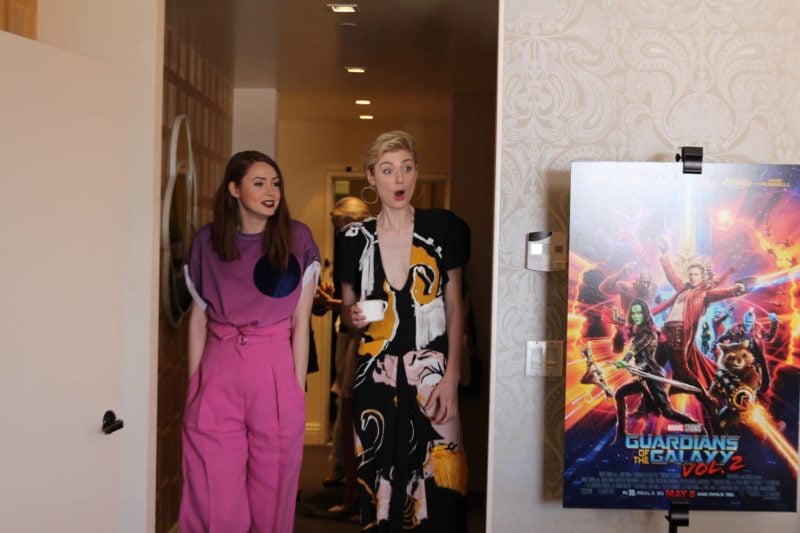 Each character, from Nebula to Mantis from Guardians of the Galaxy, has their own unique look which was truly part of their storyline. After all, would Nebula BE Nebula without her physical design? I’m not so sure. Karen admitted that when she rehearsed without all her makeup on, she didn’t feel her full force!

It’s kind of intense and slightly claustrophobic and it definitely becomes part of my ritual, in terms of like getting into character.  Like one time I did a rehearsal without the makeup and I did not feel like her at all, so it’s sort of becomes a vital part of the process for me which is kind of cool.

Pom – Mantis from Guardians of the Galaxy – chimed in as well about her makeup process:

For me, it’s much easier because it’s my skin tones, so it’s like a beauty makeup in a way.  And so I need two hours to get completely ready, hair makeup and clothes.  Basically, I wear a prosthetics on my forehead it’s just the beginning of the antennas, and then with the C-G-I they make it much bigger.  So yeah the makeup artists are like so talented I mean like yours like won an Oscar.

I also wear contact lenses in my eyes so really big ones that cover my whole eye. It’s like there’s no white in my eye almost.  And so same, I feel like kind of claustrophobic.  I have tunnel vision, so it makes me feel like in my own world, which is kind of good for the character too.  So yeah and the antennas I kind of like forget about them . 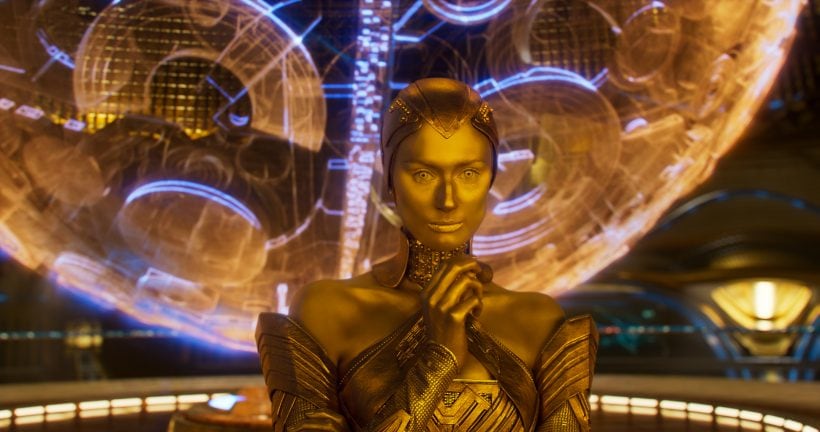 Even Elizabeth had quite a procedure… but nothing like Zoe of course.

I think I’ve got it the easiest because I just sort of sit there and someone paints me and it’s kind of sticky and cold and but I love it- the first day I thought, you know, it was a bit overwhelming the whole paint situation.  And then I came to set and I said hi to Zoe, and I said what time did you come to work and she said like three AM.  And I had a very civil call of like six AM.  Then I thought I am never ever complaining about makeup ever again.  So and I also asked her for some tips.

She said you just have to be very Zen, just be very patient.  So I would just sort of plug into a podcast.  I think it’s about an hour and a half and then with the wig cap as well.  And then actually for me the most time consuming and hectic part of Ayesha is the costume and that gold dress is almost entirely metal.  And it weighs so much.

It’s sort of- it takes about three women to place me in it. We used to call it the Ayesha Taco because the whole bottom of the dress is a great big circular metal thing. They would fold it up like a taco and then I would walk up the stairs. And she sort of gets- wherever I get placed, that’s where I am for the day- and someone said, what does it feel like, I said, it feels like a small child is hanging onto my back.

The bustle is so huge.  It so informs who you are and how you feel, it’s so sort of and for Ayesha too, the choice to be that creature and the presence she wants to put out into the world is so much the hair and makeup and the costumes.

Out of all of them, I think Mantis from Guardians of the Galaxy had it is the easiest, right?! Lucky lady. 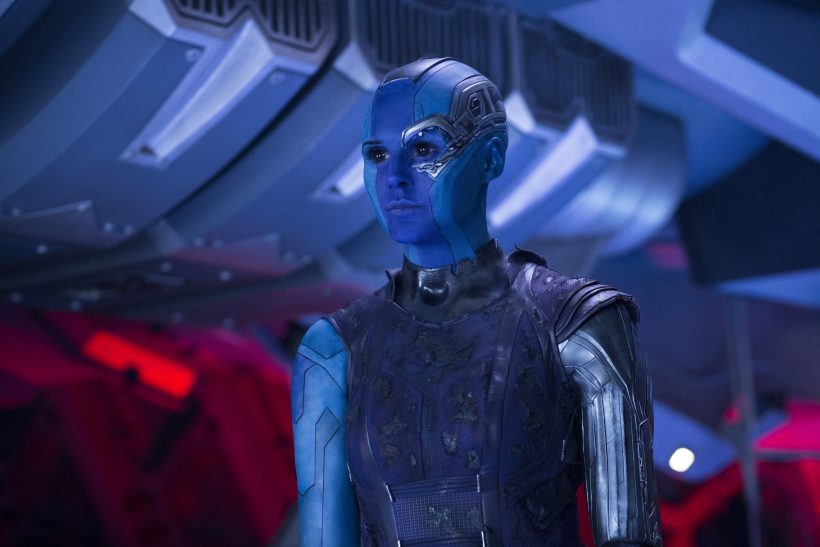 For my question, I had to ask Karen what she thought about Nebula’s back story getting some light.  I asked her how important it was to her that the audience learned that she’s really not a bad person … she’s just had bad things happen to her character.

Yes, thank you! In the first movie, we saw her and she was this sort of evil super villain watching from the sidelines a little bit, but in this movie we really understand why.  And for me like it’s my job as an actor to sort of be her lawyer and explain to everyone like why she is justified in doing these things and I think we achieve that in the movie, which is really cool. And it was just so important to me to give her those layers, because it’s not really interesting to just have a bad guy for no reason.

Full disclosure, I am Nebula’s number one fan in Guardians of the Galaxy 2. So much in fact that I am slightly turning on Gamora. Like, I think James didn’t think that would happen to anybody in the audience, but it did with me. I am 100% rooting for Nebula and I want her to get her own spin off and I want her to get all the revenge that she needs and then I want her to find love with a Ravager and have little babies and go off and live happily ever after! Obsessed with her!!!!  Obviously the happily ever after isn’t going to happen… but I could see her falling in love with a Ravager. Time will tell!!! 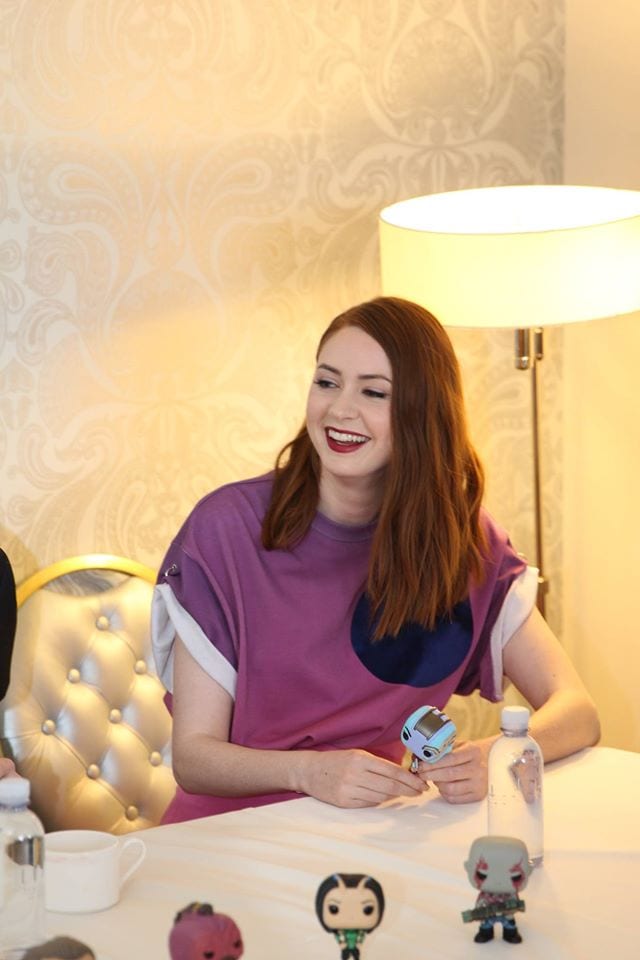 Ok – back to the interview. There is an epic Nebula – Gamora fight scene that happens kind of towards the end. The group wanted to know what Karen thought about it.

That was amazingly fun actually and I’m not the best fighter in the world, I kind of looked like spaghetti and Zoe was amazing and so she was just giving me all these pointers, and she was like if you turn your head like this and strangle like this, then you’re going to look really cool and I was like yeah! So, it was great. I really enjoyed it. I did a version of all the stunts and then an amazing stunt double came in and made me look cooler and it was cool because it was emotional as well, it was physical and emotional this battle between the two sisters and it was just really interesting to me. 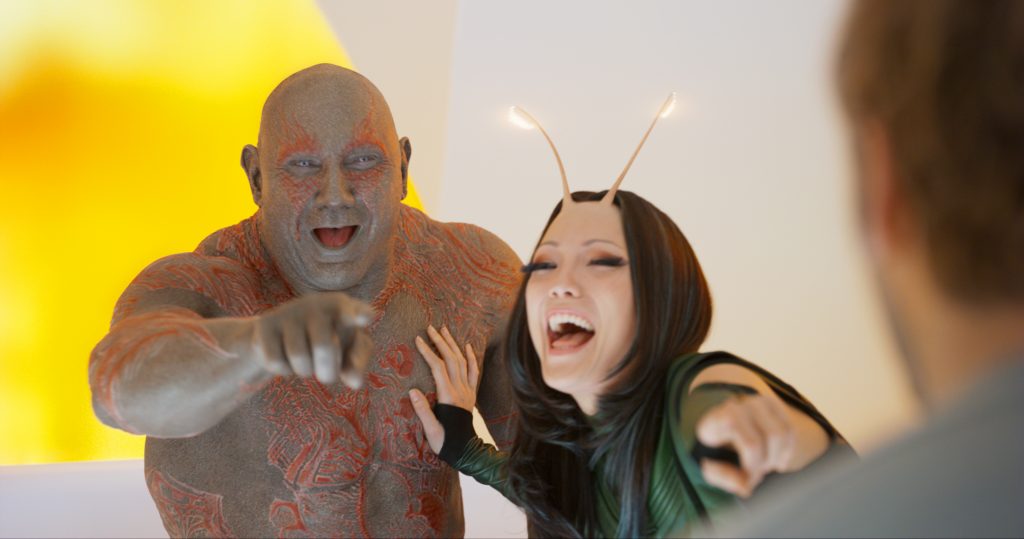 For Mantis from Guardians of the Galaxy, we wanted to know what it was like to be insulted by Drax all the time. Pom was a good sport.

It was really funny but I had to not laugh –  just laughing inside, no it’s fun.  She’s innocent, she’s like a child so whatever he tells her she’s like “okay, if you say so”, you know?

The Mantis from Guardians of the Galaxy character was so innocent and pure… and absolutely fun to watch. 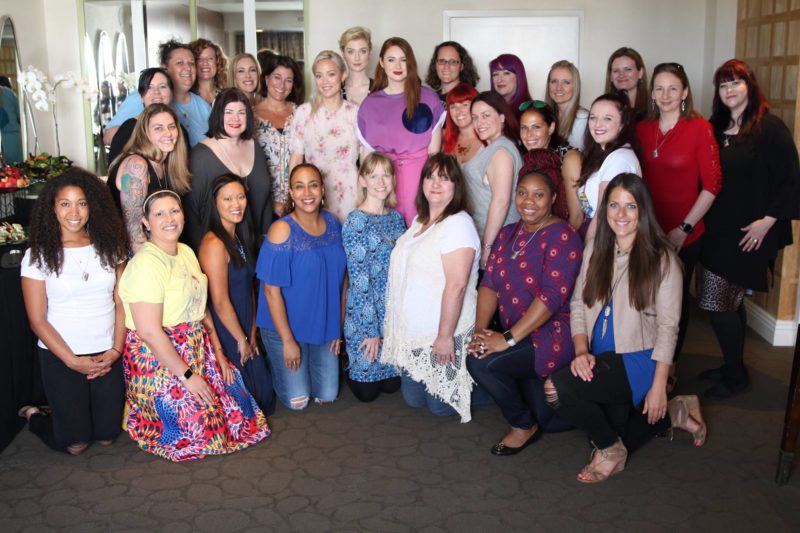 We asked Elizabeth how she felt now that her character has such an impact on the Marvel world.

It- it’s actually a huge privilege as an actor to be a part of something that people really want to see and that they care so deeply about.  And I suppose the first interaction I had with it was at Comic-Con last year and it really was on my birthday, so it was all about me- no [LAUGHTER]

And when we went into- it’s all age isn’t it- and there’s so many people there and they’re so- it’s sort of like pure joy that just shoots out and it’s incredible.  I found it very overwhelming and I sort of kept getting very emotional in interviews like just after, because it’s rare in life to be a part of something that people love so much and they care so much about.  And there is for me anyway –

Strangely enough I wasn’t really nervous about watching the film or being there last night, usually I get very nervous.  But I just have the sense that- I’d seen it already and I think it’s wonderful.  But I just sort of knew that it was going to be accepted with such love.  And I had hoped that we would be too.  Because we’re new to it.  But yeah if that explains how I feel about it. 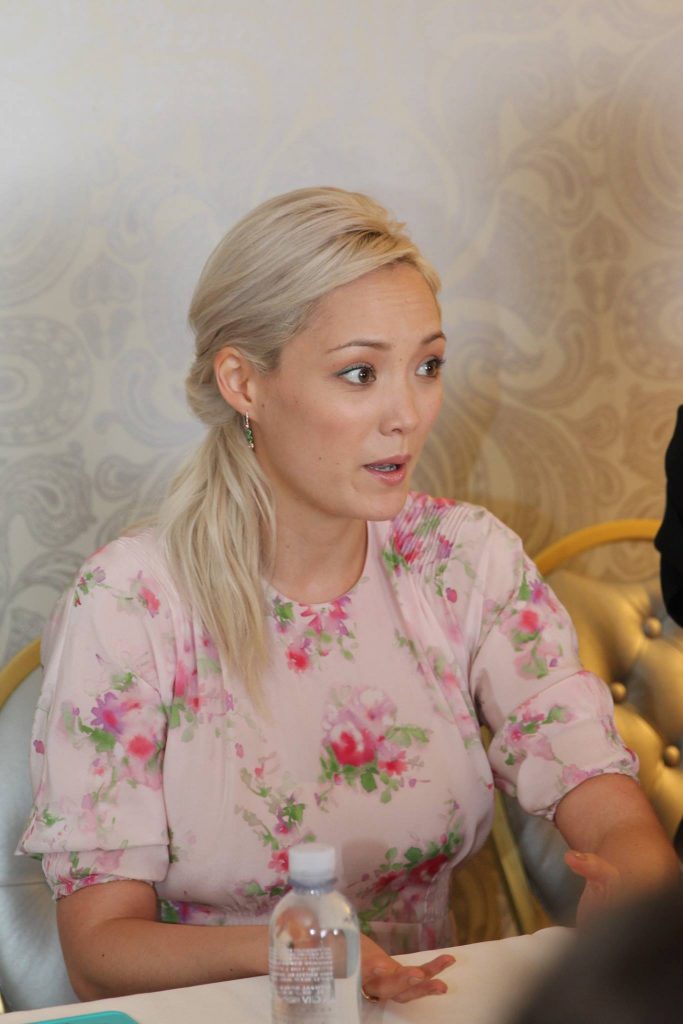 Pom, who played Mantis from Guardians of the Galaxy, chimed in as well

I think it’s not just a Marvel movie, it’s a James Gunn, you know, I think he’s such a genius. And he really reinvented the super hero movie, he made it something really human.

And it really talks about family and I mean you saw the movie- there is action, it’s also hilarious, and it’s also so moving and heart breaking it’s so many things at the same time.  The music is just hah yeah I remember this music and then some of the stuff, you’re like, oh I have to look it up. And so some stuff about the nineties with the stuff that you remember from your past.  I mean it’s so many emotions I think and I think it’s really special. 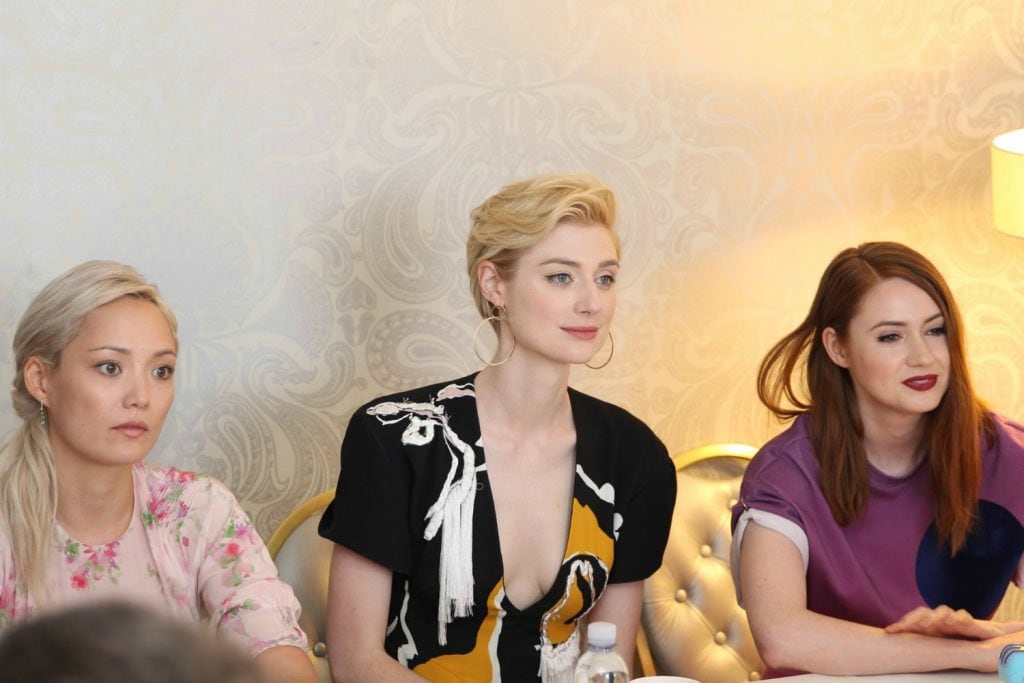 Oh my goodness – I asked Karen YET ANOTHER QUESTION! You really aren’t supposed to do that because there are so many people that have questions. But it was a very quiet room and – like I said – I am OBSESSED with Nebula this time around.

Here’s what I asked:  I have one more for Nebula because I was just so obsessed with your character, what are your hopes for her for the next movie, is it joining the Guardians, is it defeating your father, is it her just roving off on her own? What do you think she should do?

Okay, I feel like she has one clear agenda, which is to kill her father. I really hope that she is the one that gets to do that so I’m crossing my fingers for that would be like therapeutic.  That would be cool.

I’d like to see her relationship with Gamora maybe get a little healthier, however not so healthy that they don’t still try to kill each other because that’s so much fun.  I want her to be bad but like a little bit good.

Same, girl! Plus a spin off!! 🙂 Good luck to them all!!!! Such a great movie. Guardians of the Galaxy 2 OPENS THIS WEEKEND – LIKE HOURS AWAY. YOU NEED TO GET THERE. I AM SCREAMING AT YOU.

To see all the interviews I did for Guardians of the Galaxy Vol. 2 – including Chris Pratt and Zoe Saldana – click here.

*Disney invited me to attend the GOTG2 premiere and to interview the cast, including Mantis from Guardians of the Galaxy. All opinions are my own.