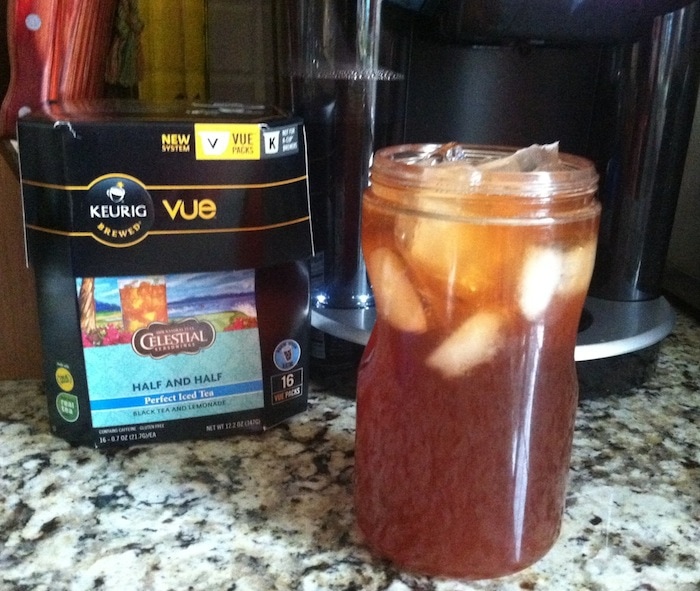 I made a video a while ago about the wonders of my new Keurig Vue. The company made some major enhancements to the system – one of which is a setting specifically designed to brew iced beverages.

Well… little did I know that that setting would save me hundreds (if not thousands of dollars a year). You KNOW that I am a Starbucks fanatic! I get a Trenta Black Tea Lemonade whenever given the chance. Sometimes, I even have two of them in a day which means I can spend at least $9 in 24 hours. Times that by 365 and you are talking MAJOR DOLLARS.

The Keurig Vue has a black tea lemonade pod that tastes GREAT. I bought 5 boxes (yes 5 boxes) last week because I never want to be without my favorite drink. 32 Count – Vue Pack Celestial Seasonings Half and Half Perfect Iced Tea Vue Cup (Black Tea & Lemonade) For Keurig Vue Brewers will run you $31 a box. This means my drink suddenly went down to about $1 a cup.  I could CRY!!!!!

Truth be told – I sometimes add a splash of lemonade to it. Just a splash to make it a tad sweeter. But you might not need that.

If you are looking to save money  – this is the route for you. Over time, you are talking about thousands of dollars saved.

And with the Vue – half of the pod is now recyclable. The center (where the beverage is) pops out and the plastic part can go out with the rest of your recyclables. How wonderful!

Nice blog here! Also your website loads up very fast! What web host are you using? Can I get your affiliate link to your host? I wish my site loaded up as quickly as yours lol

I saw your tweet and knew I had to read it. I'm obessed with Starbuck Black Tea Lemonade. I had no idea there was a kcup for them, defiantly going to have to try them.