In anticipation of 20th Century Fox and DreamWorks Animation’s hottest new flick, Turbo, Ryan Reynolds stopped by the Today Show to chat about his character in this high-velocity, 3D comedy about an underdog snail who dreams of winning the Indy 500 . Lady And The Blog was lucky enough to visit the Today Show, and watch first-hand as Ryan challenged Today Show hosts Matt, Savannah, Willie, and Natalie in a little skee ball competition in the Today Plaza, which was transformed into an Indy 500-style racetrack, where snails glided up the side of Studio 1A. We were on Team Turbo all the way! 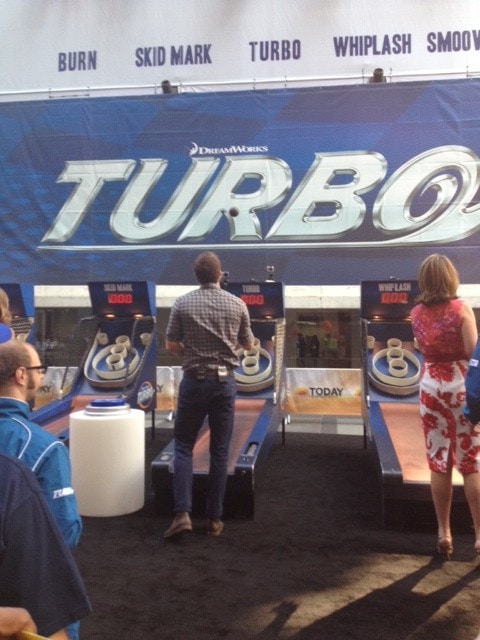 After his Today Show appearance, Ryan Reynolds was gracious enough to sit down with myself and an intimate group of bloggers to discuss Turbo, and how he related to this summer-must see. Not only was he totally handsome and charming, but he was so quick-witted and kind, he comes off as impossibly perfect. Here are some highlights from our interview:

On his childhood dreams…

“It changed many times. That’s the great thing about being a kid is that you’re kind of at the mercy of a tremendous amount of whim.

On how he relates to Turbo, and has faced his fears to achieve his dream …

“Not unlike Turbo, I have those naysayers.  I have those people that say, “Don’t do this.  You’re never going to make it.  You’re a fool.  You should be going this direction.

And everybody seems to have their own agenda for our kids, or your brother, or your sister, or whatever it is.  And the worst offender is ourselves.  We tell ourselves we can’t do it.  We’re not good enough.  We’re not smart enough or good looking enough.

You really have to usurp those thoughts and just kind of push forward and see what you can do. And for me it was just moving down to L.A.  That was the scariest thing, moving from Vancouver to L.A., and taking part in that system.  My expectations were always very minimal for myself.

I managed to thwart as much letdown as possible and that’s always served me really well, just keeping my expectations kind of reasonable.”

Some personality traits that Turbo and Ryan have in common, and how he handled growing up as the youngest of four boys…

“I grew up with a lot of brothers, so I like the fact that Turbo kind of has a bit of a silver tongue. He can throw it back at Chet [played by Paul Giamatti] as much as Chet can throw it at him. So, I knew growing up in my household, it wasn’t my brawn that saved my butt.  It was my wit.

I devoted more time to upsetting my brothers and I was the youngest.  I didn’t have as many responsibilities, so I could really devote time to drawing up my humiliation for them, almost in an architectural sense.  So, it was good.”

On his own driving habits…

“I’m a little more of the slow and steady wins the race mentality. I’ll drive in my car around.  It’s sort of the stereotypes get a little bit flipped.

So, yes, I get a little distracted.  I like to listen to This American Life, it’s one of my favorite shows.  So, I listen to it, and I’m driving all the time and I sort of grip.

When I get excited, I hit the brakes, and that’s a terrible thing to do, especially when you’re operating a gasoline-infused bomb down the highway.  Well, actually, mine’s electric.

But no, I’m not a big racer.  I have 17 years of motorcycling under my belt. I love motor cycles.  I love fixing them, I love racing them, I love riding them. I’ll do that, but not in a car.”

On working with other actors in a voiceover capacity…

“I did a little bit of work with Paul Giamatti, because we have that fraternal kind of relationship, so we had fun together.  I’ve known Paul for a long time.  We did a movie together maybe 16, 17 years ago.  But, yes, I worked with him a little bit, but oftentimes, you don’t.

I’ve known Samuel L. Jackson for a long time, but I only really hung out with him for any regularity this last couple of weeks, just running this in Spain.  You don’t really spend a lot of time with everybody.

You literally go into a recording studio.  You can wear anything you want – in my case just a dash of baby powder – and record for two hours and off you go.”

“I think it’s great.  I have an army of nieces and nephews.  I mean, literally an army.  If we militarize them, we’d all be screwed.

And so, for me it’s a blast to have them out for the premiere and have them here and be a part of this. So more often than not, they don’t really get to see their uncle’s side of it.

And this is a side that’s really exciting to them.  Visiting me on a set, that’s like giving a child Ambien. Coming to this part of it is the fun part for them.”

How he feels about social media…

“I think it’s just about prioritizing.  You’re in the public eye in this way, you could actually find a way to occupy every second of the day with some form of stimulation, and that’s the thing you have to kind of be wary of and to enjoy the quiet moments as much if not more than the circus moments.

For me the balance hasn’t been difficult.  I’m much, much happier being hermitic and retreating to my little cave and being quite happy there.

It’s never been a big deal for me.  I’m not a big drinker.  I didn’t really fall into a lot of those trappings, which are very easy to fall into.  I understand why they’re easy to fall into, but I’ve always been kind of a low-key person.”

What he likes to do with his family…

“I live in New York, so there’s always something to do.  That’s the great thing about living in New York is you walk one block, and you’ve been exposed to more culture than you would find in a five-and-a-half hour drive through Brentwood.

So, it’s a nice feeling. It’s nice to live in the City and to be a part of it.  It’s like a moving, breathing machine, and I love it.

When I’m with my family, we’ll go for a walk.  We’ll go to a museum.  We’ll go see a show.  There are a million things to do in this city.  It’s one of the greatest places on earth.”

On having a group of friends that build you higher, like Turbo…

“Yes, I think you have to.  Everybody has to.  Sometimes it’s yourself. I have a very close relationship with my brothers.  I have three older brothers, and every one of them, I love desperately.

As we’ve grown older our hangouts have resulted in less messy stabbing deaths and more sharing of ideas, opinions and information.  So, we’re real close now, and I love them. Some of them are here, actually.”

“It gets so much better, yes, honestly. My three older brothers and I, we single-handedly ruined my father’s home.  We lived in this house, and we put more holes in it than you can possibly imagine. When the wind kicked up, the house whistled.  That’s how many holes we put in this house.

So, having boys is tough.  I get it.  Teach them how to patch and drywall, though.”

Finally, when we ran out of questions to ask, Ryan left us with one last thought…

“That’s it?  Nothing.  The answer is blue is my favorite color.” 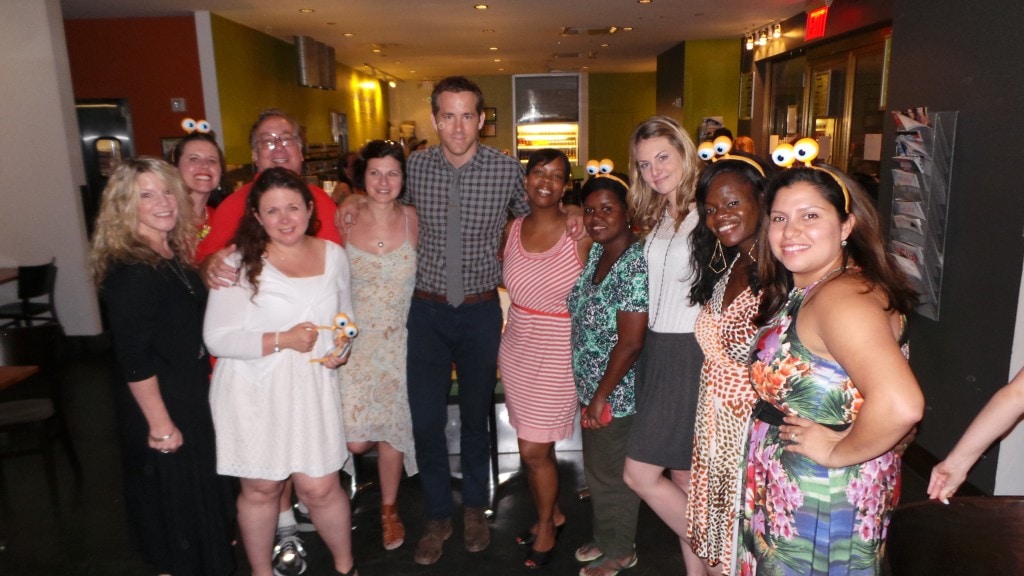 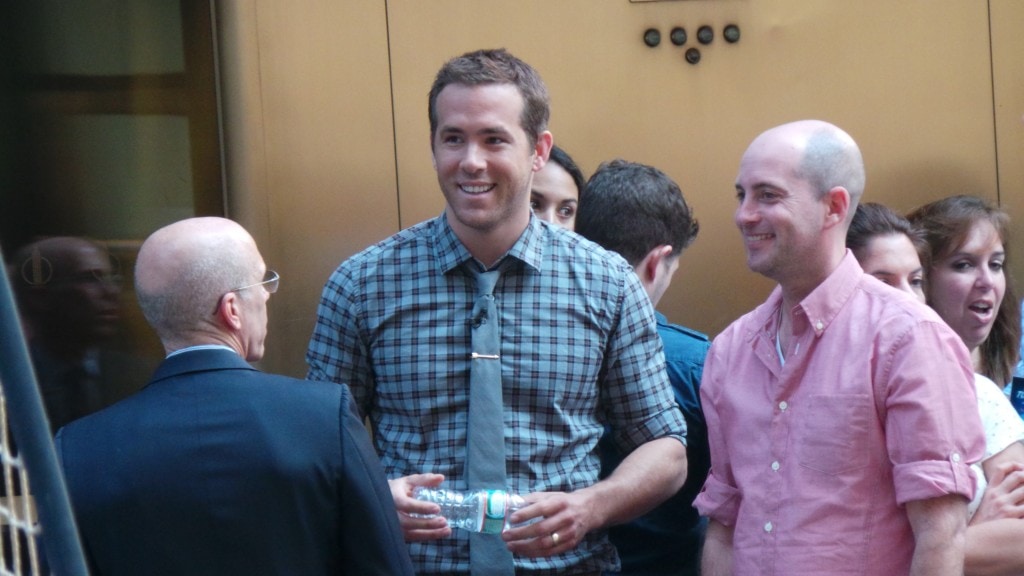 Be sure to click here for a fun and free printable Turbo Coloring Book!