One of the main reasons I love to go on trips with Disney and Pixar is because they give you a view behind the curtain. Not many movies leave LIFE LONG IMPRESSIONS on people. I can probably count the ones that have impacted me so intensely on one hand. One scene that comes to mind whenever I go on these trips is from ‘The Wizard of Oz’. The one when Dorothy goes to see the Wizard and the curtain falls back and she really sees him for the very first time. He’s working his magic… or should I say his technology and smoke and mirrors …and everything she thought to be true changes. He wants her to hold onto the illusion so he screams to her, “Pay no attention to that man behind the curtain!”

But that man behind the curtain IS the magic. He is … everything. He is the reason we believe in all that we believe in after all. And yes, maybe everything is happening because he is making it so… but it’s beautiful nevertheless. 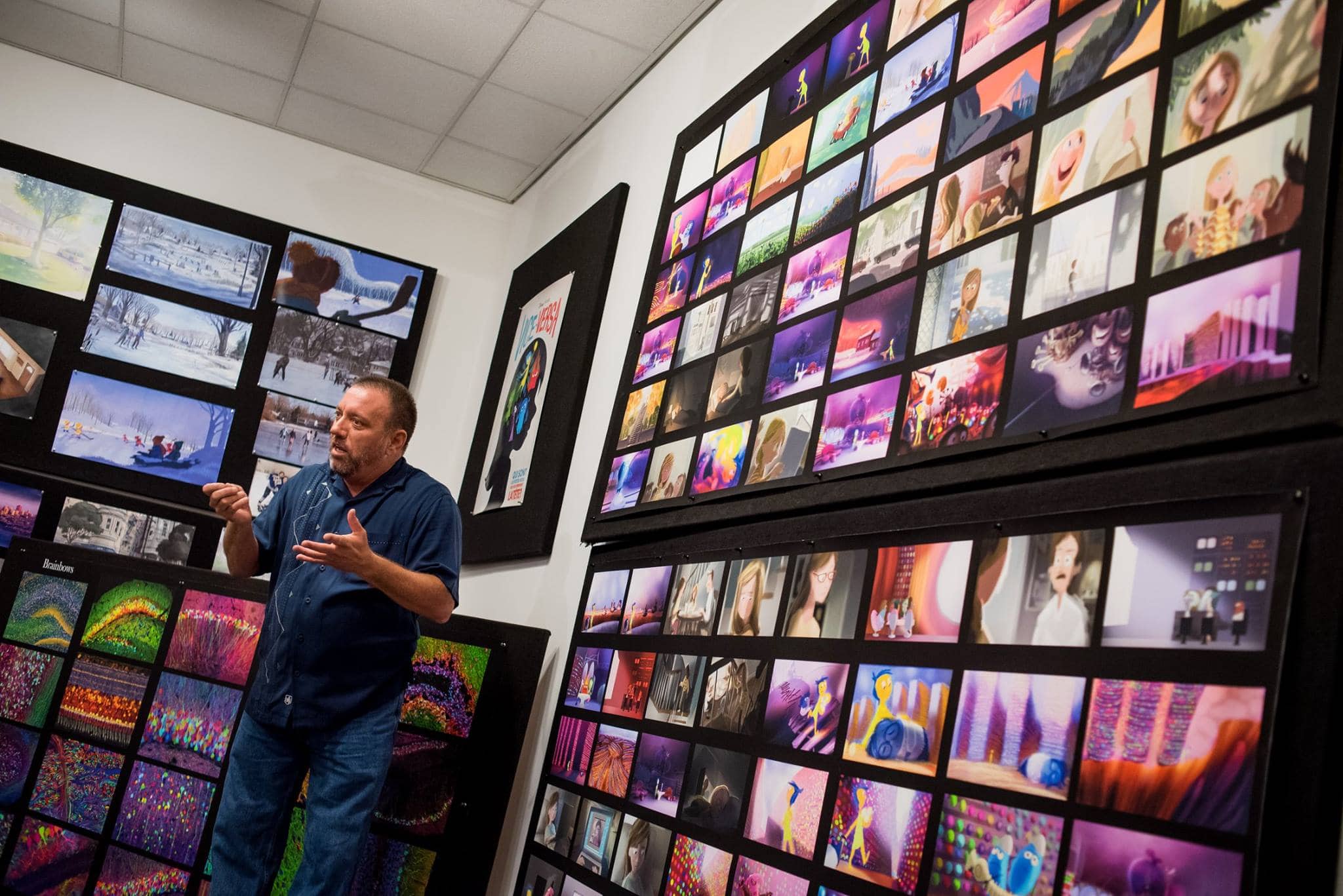 During my most recent trip with Disney and Pixar, I was whisked away to San Francisco to attend a press junket with the team that created ‘Inside Out‘. One of my first interviews was with Ralph Eggleston – Production Direction – and we chatted a bit about how the Inside Out world was created.  When you are sitting in these offices and you are surrounded by original concept art that pretty much MOLDED an entire film, you almost can’t HELP but get LOST in it all. My favorite photos are on the bottom LEFT of the above photo. Before we even jump into anything else, I HAVE to talk about those for a minute.

They… are…. neurons. ACTUAL neurons that are found in our brains. They were colored and dyed so the team can really SEE what they look like, but they are REAL and they acted as inspiration for the entire footprint of this animated film. I mean, aren’t they BEAUTIFUL?! He called them  “brainbows”. HA! I was hoping we could buy them somewhere. I was completely entranced by the notion that they weren’t created by hand. Instead, all that beauty … that “organized chaos” actually lives inside of each and every one of us. 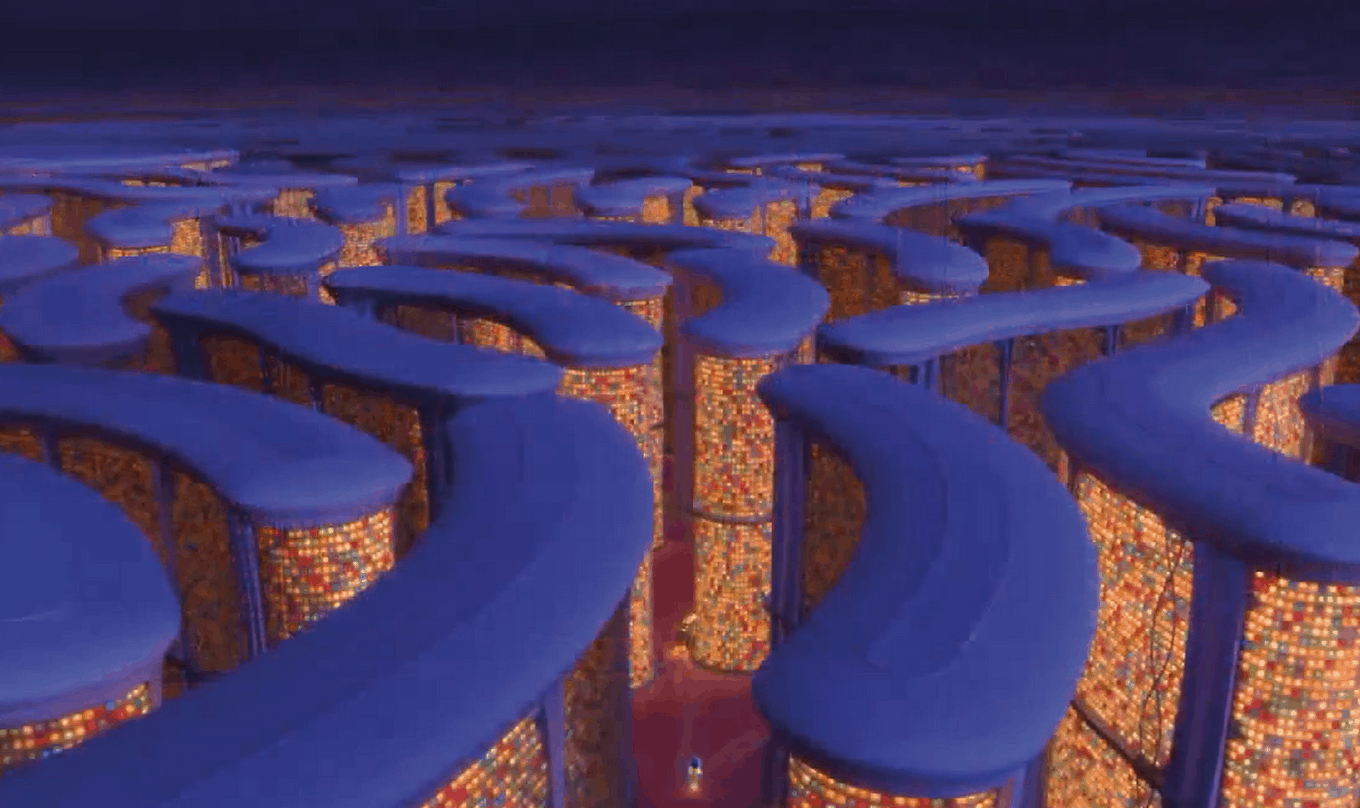 Ralph said his biggest challenge during the initial stages of creating Inside Out’s footprint was determining what the mind looked like — NOT THE BRAIN. The mind. The team was focusing on what they believed was the place where our thoughts and emotions were processed. The brainbows helped put them on a path. If you look at the above shot which represents “long term memory” you can sort of see a resemblance to the brainbows, right? 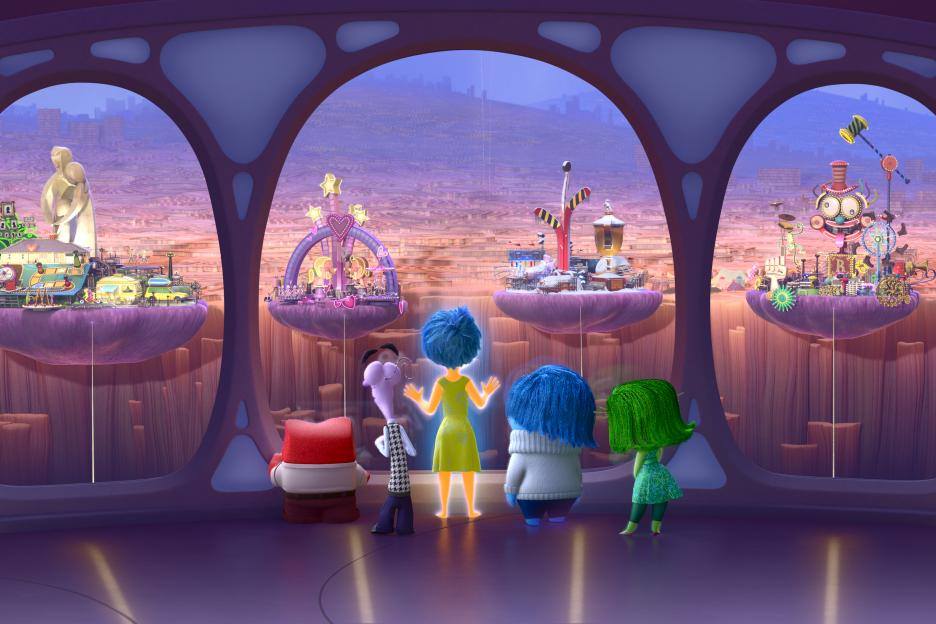 The team had other goals they had to hit as well. A TOP PRIORITY was making sure that the audience could clearly see the difference between the REAL world (not the MTV version) and the EMOTIONAL world. How did Pixar jump that hurdle? They played with color, translucency and shadowing. I watched a very long preview and I can tell you first hand that it is VERY clear what state you are in at any given moment.

This film had to speak to everyone – kids, parents, grandparents, and everyone in between. That’s pretty typical these days for Pixar and Disney, right? I always feel like I have a great experience when I take my children to the movies. I feel like nowadays, the FAMILY is thought about – not just the child. So appreciated!!!

Of course, there were some difficult obstacles they had to overcome. Joy is so full of life and has this outer glow is filled with these tiny bubbles. As a viewer, you think that it looks cool… but as an animator you pretty much gave up blood, sweat, tears and 8 months of your life to make that happen. THAT was a DOOZY! It all started out with a little champagne. Think about the bubbly drink when you see Joy for the first time. It makes sense, trust me. Technically, it was quite the feat!  It’s a good thing John Lasseter didn’t tell the team to make all the emotions have that effervescent glow. Oh wait, he did. WOOPS! 🙂

I mean, even the Train of Thought – something that is important to the film but not something you would consider to be a lead character or figure went through 284 variations before they landed on the final copy. WOW! 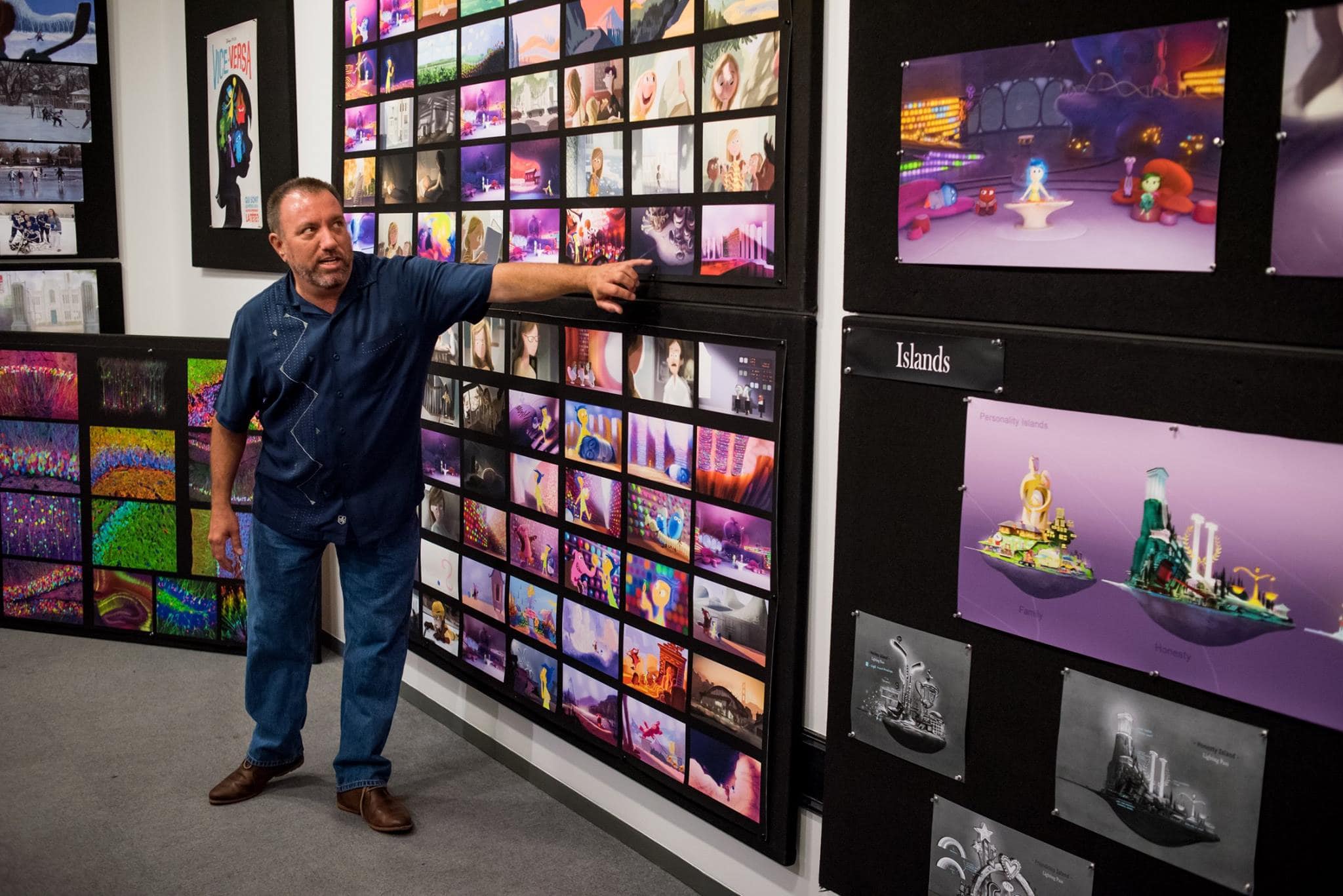 Ralph Eggleston has worked on Toy Story, Monsters, Inc, Wall E, The Incredibles, Finding Nemo … just to name a few. Inside Out is the latest project on his incredible resume of blockbuster hits and it’s no surprise that he’s taken home an Academy Award. This man knows what works. He has an eye for the animated and an imagination that can take us… anywhere. I cannot wait to finish this journey for Inside Out. What happens to Riley? We will find out this June! 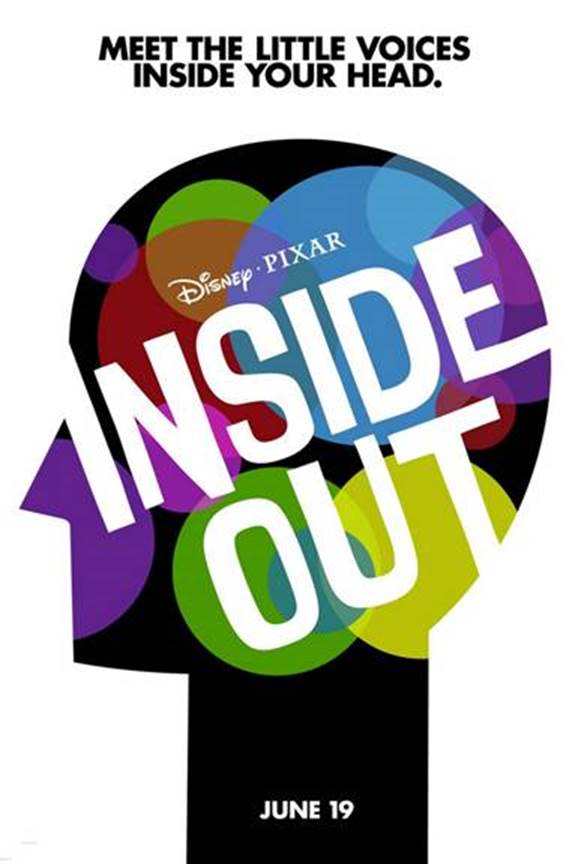 Inside Out hits theatres on June 19th!!!