I Met Captain America, Chris Evans, And He Let Me Hold His Shield While On Set!

I met Chris Evans while touring the Captain America set as it was filming and he let me hold his Captain America shield. WHAT?! I have been sitting on this FOR MONTHS!! I signed a MEGA NDA while I was in LA while I was there for the red carpet premiere of Iron Man 3 and COULD NOT TALK ABOUT IT UNTIL TODAY. 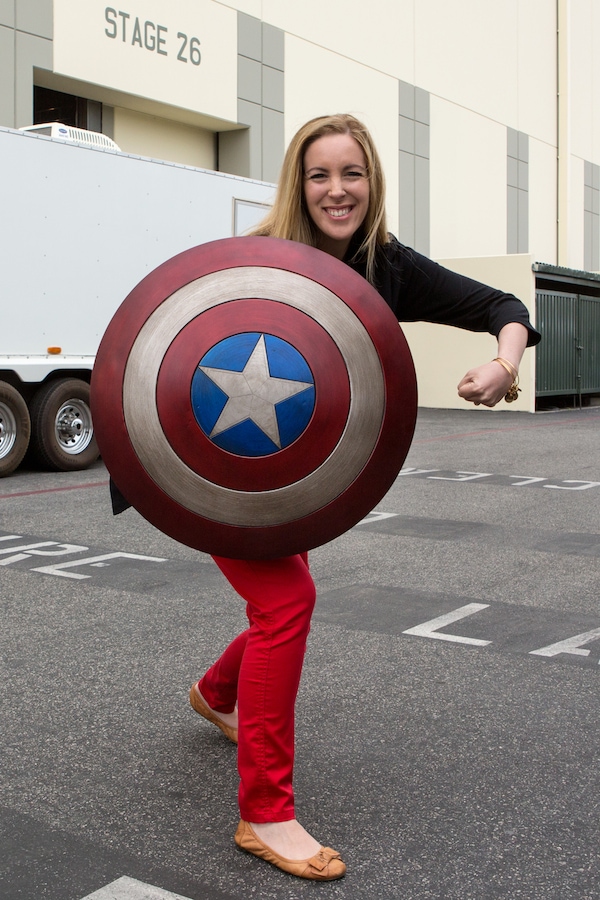 They didn’t want me saying BOO about my SET VISIT TO Captain America: The Winter Soldier. YES!! I actually got to hang out with Chris Evans. We went out to lunch and went sailing on his yacht and… ok maybe the last few things did not happen.

BUT I did actually get to meet him for a few minutes on set and chat with him about his newest superhero role. (more on that in a bit) Total Bliss.

I Met Chris Evans And He Let Me Hold His Captain America Shield While On Set! 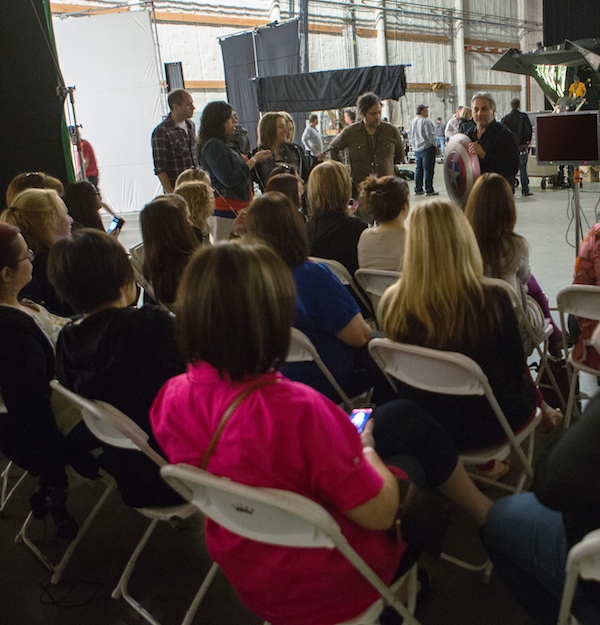 Disney sure knows how to treat a lady. After the Iron Man 3 premiere, we all jumped into our cars and headed over to the locations where the Captain America: The Winter Solider crew was bunkering down. We were in this H-U-G-E sound stage and Marvel / Disney had set up a little area for the group to sit down and watch as Chris Evans, Scarlett Johansson (dressed head to toe in leather —  omg she looked FAB), and Frank Grillo work out a few scenes.

They were on the other side of the stage so we had headphones and televisions to watch. It was super cool. I literally could have stayed there all day. Heck… I was actually trying to figure out a way to get into the scene but couldn’t come up with a viable solution.

Spent the majority of my time searching for “Instant SAG card” on my phone. Unsuccessful… 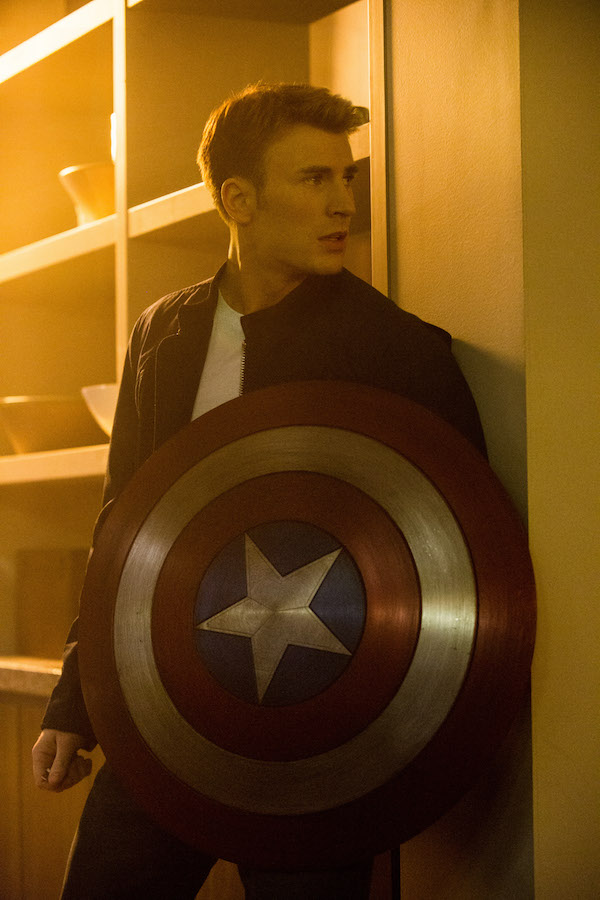 An Interview With Russell Bobbit

In between takes, we had the opportunity to chat with Russell Bobbit — Property Master. You know, the guy who makes all the cool superhero flagship items in your favorite films. LIKE THE FLIPPING SHIELD from Captain America or the hammer from Thor. He’s THE GUY — the one who is responsible for it all. My inner geek was screaming at the top of her lungs.

I know I talk about shoes and lipstick on a regular basis — but there is one thing you better remember about me. I am a Marvel girl through and through. This was a BIG DEAL for me.

Back to Russell. The Captain America shield is pretty much a main character in this film … wouldn’t you say? It’s in just as many scenes as the rest of the team and it has to work in every scenario.

So, you better believe that Marvel made sure they had the right guy on the job. And boy did they – the Captain America shield is PERFECT. 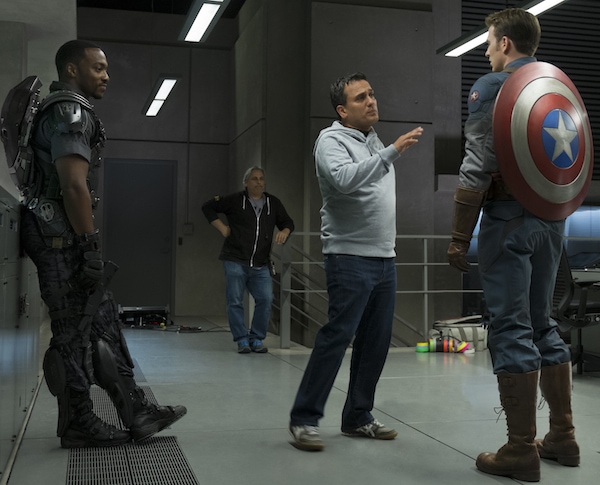 Facts About The Captain America Shield

Did you know that there were about 50 Captain America shields – all created with different materials – to suit the needs of the film??

I have to make 50 shields to accommodate all the different scenarios. I have hard rubber, soft rubber, fiberglass, metal too.  So, for example, if there’s an insert on it  – I would use a metal one because metal looks the best. If the actor needs to hold and play with the shield, then I would use a hard, rubber one. It’s the next to the best.

We need so many because we do so many different shots.  If he’s walking around and it’s on his back, I can put a really clean, nice, heavy one on him. And when we photograph them from behind, it looks shiny and new like metal. When Chris takes it off and starts fighting with it, obviously we can’t hit each other with metal shields or the boys won’t be able to play very long. So I make soft ones to accommodate the fight scenes.

How crazy, right?! You never think about things like this. We – as moviegoers – take these little details for granted. But going behind the scenes and learning information like this TRULY makes me appreciate this art so much more. Because making movies really is an art. No doubt about that.

It’s easy to forget the process behind the film because a movie can quickly sweep us away with the storyline. But there absolutely was a process!!

And Russell reminded me of just that. I can’t WAIT to see Captain America: The Winter Solider — and you better believe I’m going to be checking out that Captain America shield! HA! 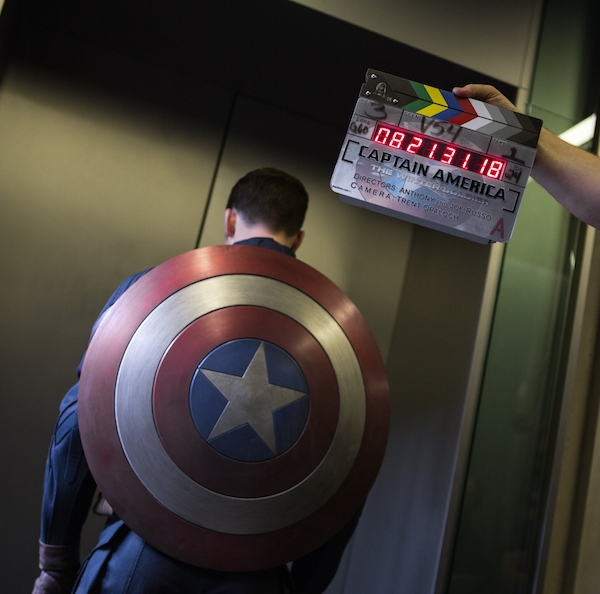 If you want more Marvel movie fun, check out this other stories: