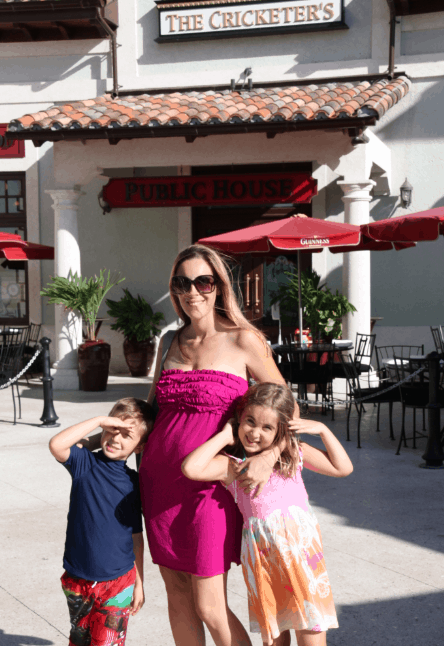 I’m in Turks and Caicos at Beaches and taking lots and lots of pictures with the kids. It was my intention to NOT mention this little pregnancy until I hit about 20 weeks. But I physically cannot hide it anymore. By the third kid, your uterus knows exactly how to stretch and when.

On Friday, I will be 14 weeks pregnant. I can’t believe this is actually happening! My husband has been begging me for 5 years to have another kid and I just flat out refused because I don’t have easy runs. But something happened in the beginning of the year that changed my mind. I am a true believer of fate – and I believe a press trip down to Florida was in the cards for me.

Without going into too much detail, I’ve been afraid to have another child. Like I said, I don’t have easy runs and I actually have a really CLOSE friend who suffered a tremendous loss. A still birth at full term. It cracked me in half. I decided then that there was NO WAY I would go again.

But she went again and now has a beautiful baby girl. What a lesson for me – we are stronger than we think.

That press trip put me in a room with a dozen women – all from different walks of motherhood. One woman was a surrogate, one just adopted a baby from Africa, one had 9 children, my best friend Audrey with four boys trying for another child herself, etc. etc. You name it and she was there. It moved me. Anything is possible. Everything is possible. And when I got home from that trip, I told my husband I was ready.

Let’s get down to the details —

What about all my migraine medication???

I had to get off ALL OF IT.  It took me a few months to ween off of my daily meds and let me tell you – it wasn’t easy. I’ve suffered three migraines since becoming pregnant (which isn’t that bad) and I can’t take anything for it. I just rest, drink lots of water and take a ton of Tylenol. After 3 or 4 days, the headache usually goes away. It’s not fun.

I’m minimizing ALL stress in my life to try to reduce the amount of migraines I get. Here’s to hoping it works. Oddly enough, I think that the hormones in my body are preventing the typical 8 or 9 that I usually get each month.

Are you going to find out the gender?

How long did you try?

But you said you had complications with your pregnancies?

I do. I’ve switched doctors and am now in a high risk practice. They are all over it. I have appointments every few weeks and we’ve already discussed different scenarios. I’m scared. I know I will be placed on bedrest… but like my doctor said… I’ve had two FULL TERM babies. So even though there is some hospitalization in my future, it’s worth a lifetime with a new child.

What kind of pregnancy problems do you normally have?

According to doctors, I am irritable and incompetent. LOL – no seriously. I have an irritable uterus and an incompetent cervix. At around 16 weeks, my body starts to go into pre-term labor. But with rest and some medication – it’s been manageable.

With Liam it was a little harder than with Natalie. I was in and out of the hospital for 2 months because the doctors wanted me RIGHT NEXT TO THEM just in case they had to intervene. I had him at 38 weeks though. So, even though this isn’t easy… it’s going to be ok. I have to keep saying that to myself.

Are you going to totally annoy us with limitless updates on your pregnancy?

So, that’s it for now. I am SUPER excited. My daughter kisses my belly 100 times a day. She is insisting that she prayed for this baby to come and that’s why it’s here. She actually has placed full claim on the little prune… or plum (or whatever fruit size I am up to).

I’m due the beginning of March – but with my track record… I’m guessing mid-February.

Vera, I'm so happy for you! You have such a great family, it's such a blessing to add more to the fun! I'm due Feb 3rd and as you know, this is our first! I feel like we're going through the pregnancy journey together! Praying for a smooth pregnancy ! Xoxo Jenn

So happy for you!

Thank you everyone!! We are thrilled. Appreciate you taking the time out to comment. :)

Congrats!! I'm so happy for you!