How To Host A Minions Party For The Kids

Are you ready? The Minions have their own movie! See them in theaters July 10. To celebrate the festivities, I hosted a Minions bash in my house and the kids had a BLAST. 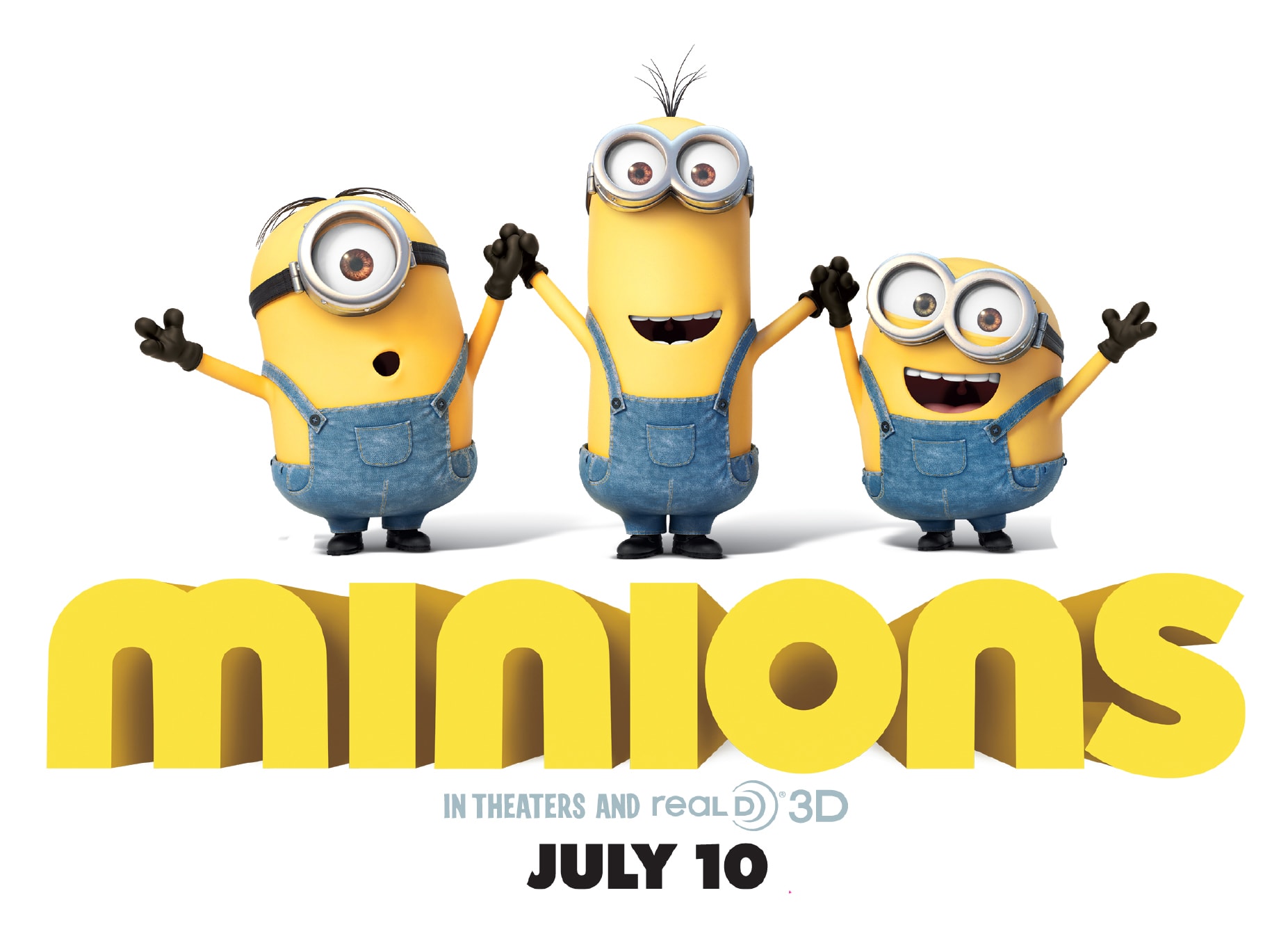 I know I gave you a sneak peek of it all a few days ago during my DAILY VLOG update, but here’s a closer look at some of the arts and craft projects we did. It’s all about DIY when it comes to kids, right?

How To Host A Minions Party For The Kids 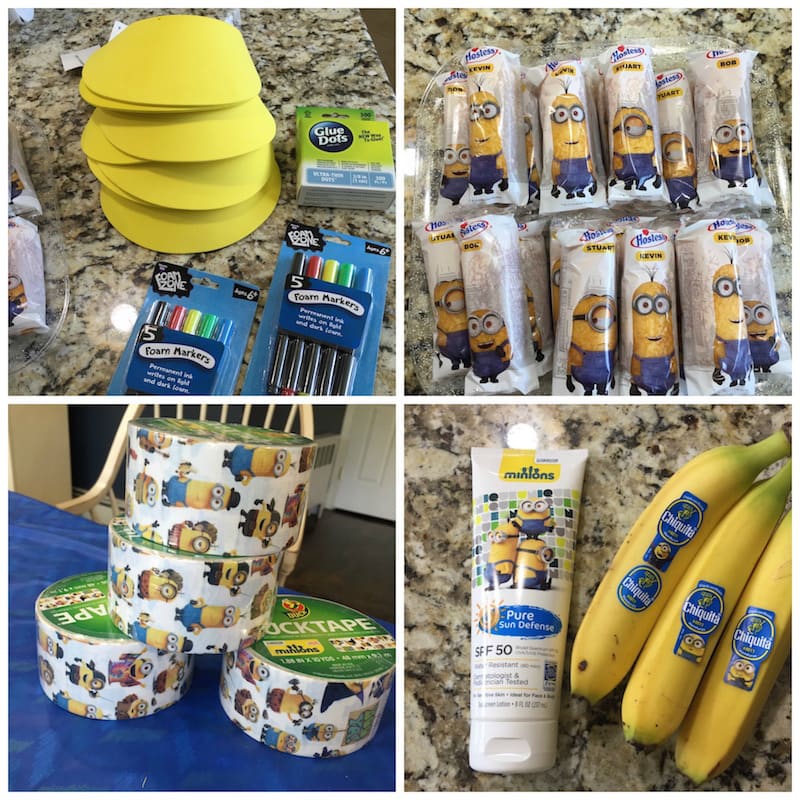 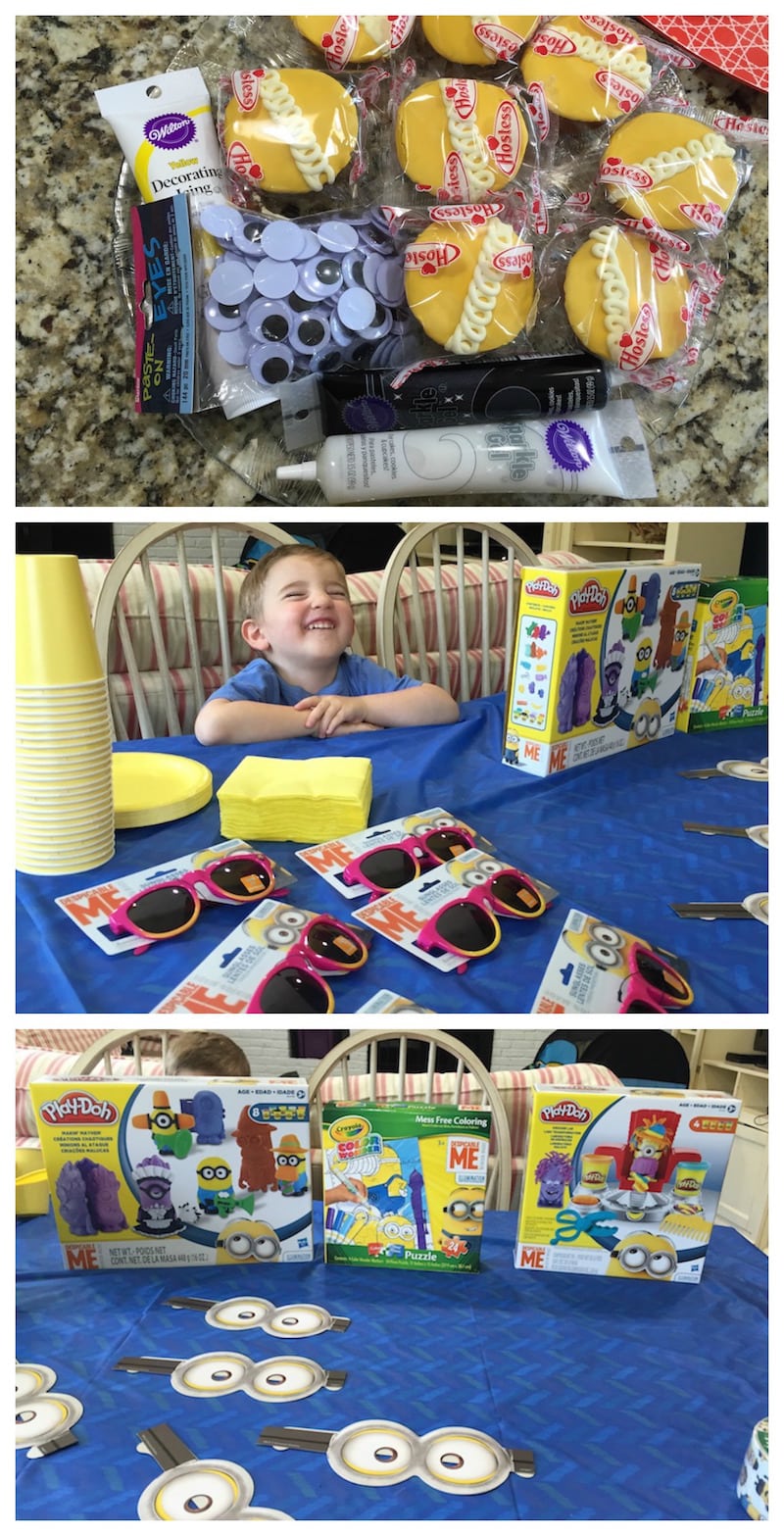 I went to the store and picked up anything Minions related. Lucky for me, I found a few great options including duck tape, bananas (lol), sunglasses, Play-Doh and Crayola kits and sunscreen.

THEN I got a little creative at the arts and craft supply store. I LITERALLY picked up anything that was yellow, black, blue and white. I didn’t know how it was going to end up – but I knew where I needed to start.

Once I had everything in front of me, I decided that the kids would make their own Minions cupcakes, visors, Play-Doh creations and of COURSE duck tape purses. SO FUN! 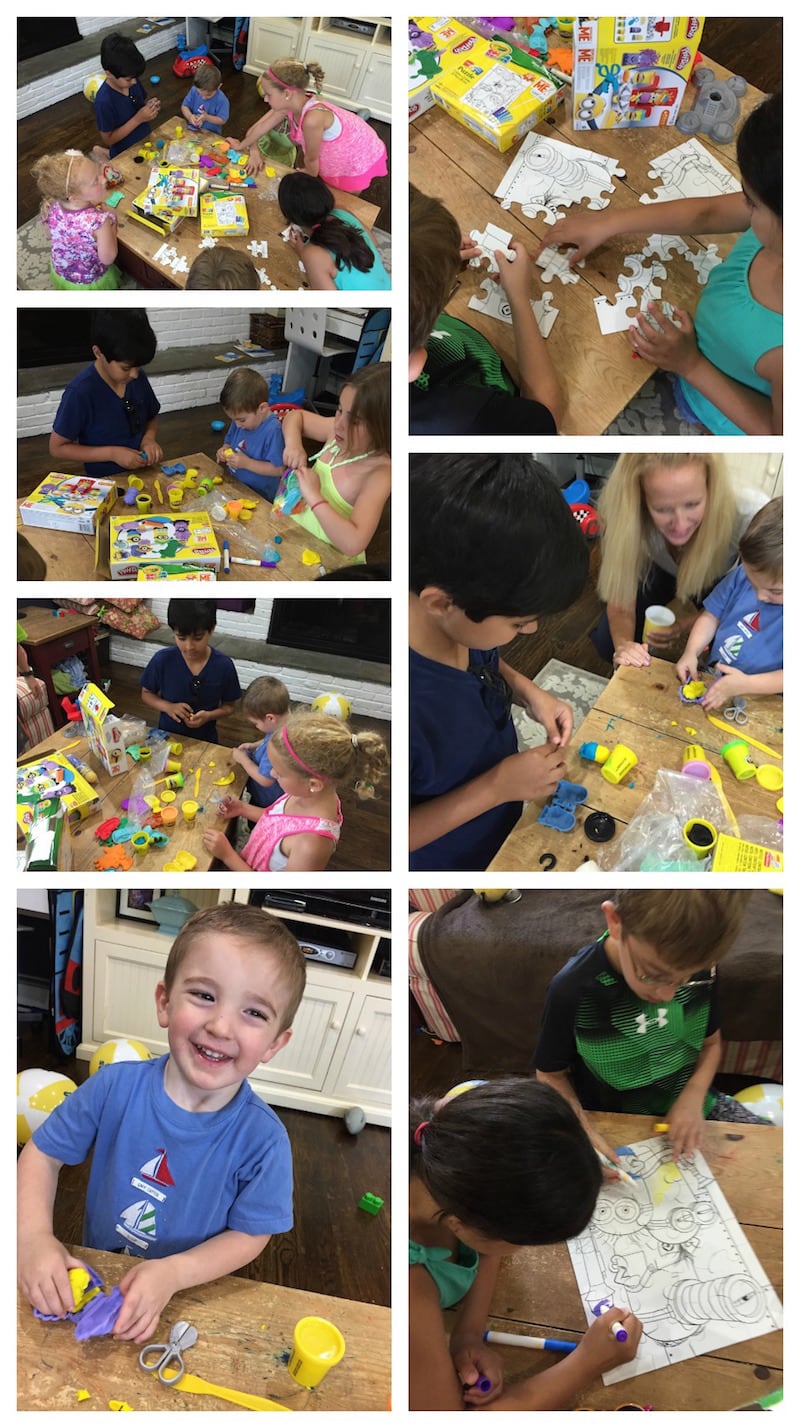 The Arts and Craft Activities:

The Minions Movie is coming out on July 10th, so I wanted to put together a few fun activities for the kids to replicate once they were home on their own — in an attempt to get them excited for the release.

We started out with the pre-boxed activities. Play-Doh and Crayola have a few great items currently on the market. The children enjoyed putting together a Minions 24 piece  Jigsaw Puzzle and showing off their creativity by mastering the Play-Doh Featuring Despicable Me Minions Disguise Lab. You KNOW Caleb loved every second. 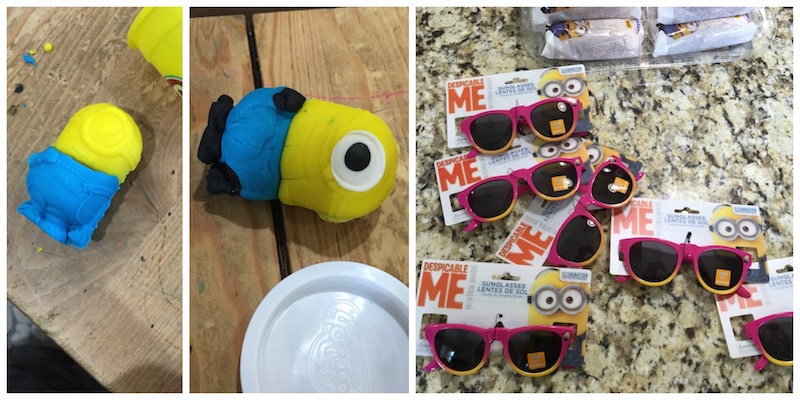 One of my guests – Owen – ROCKED the Play-Doh creations. Look at his MINION! Amazing!!! 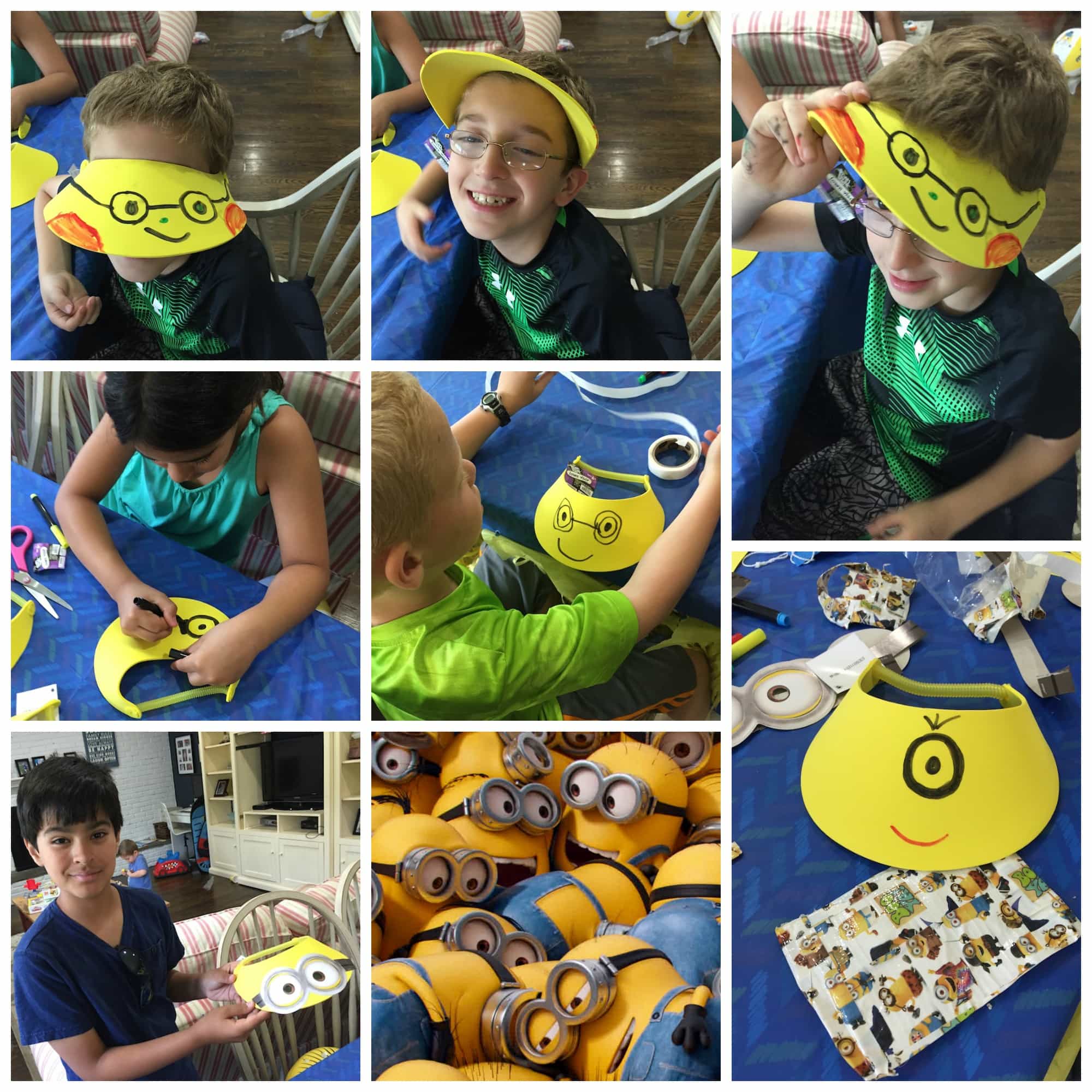 Then it was onto the visors. This was such an easy craft. I let the children create their Minions visor any way they wanted!! Some used graphics I had out on the table while others drew it out completely from scratch. A really affordable DIY opp if you ask me! 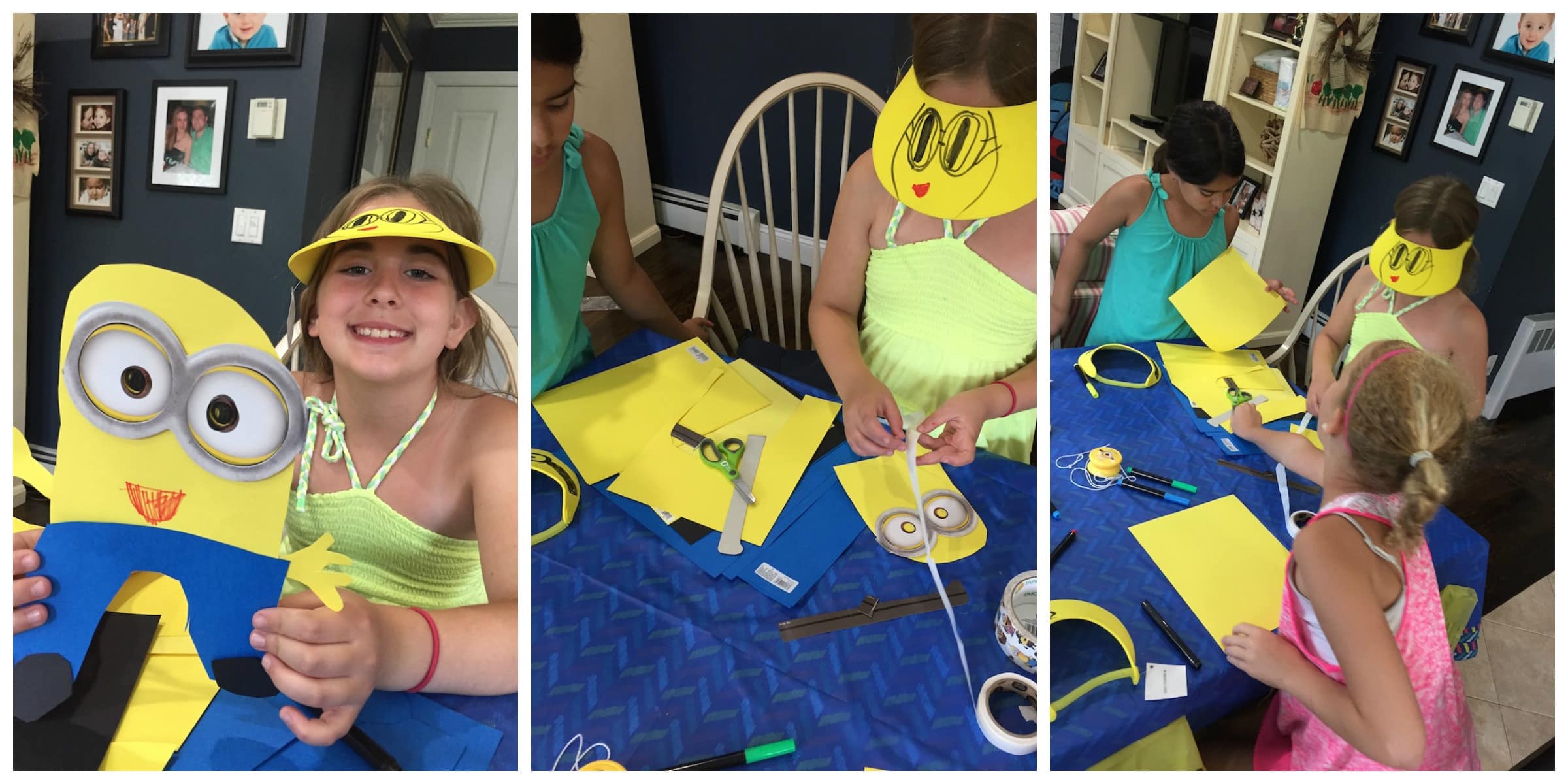 If you haven’t figured out my M.O. yet, let me spell it out for you. E-A-S-Y. I can’t do a lot of intense crafting. Pinterest is fun to check out but… not to actually replicate. I need SIMPLE crafts that kids can do because I don’t have the capacity to help them!!

So, when I bought some paper in minion colors and told the kids to go wild… they did just that without any adult supervision. And isn’t that a WIN, my friends????? 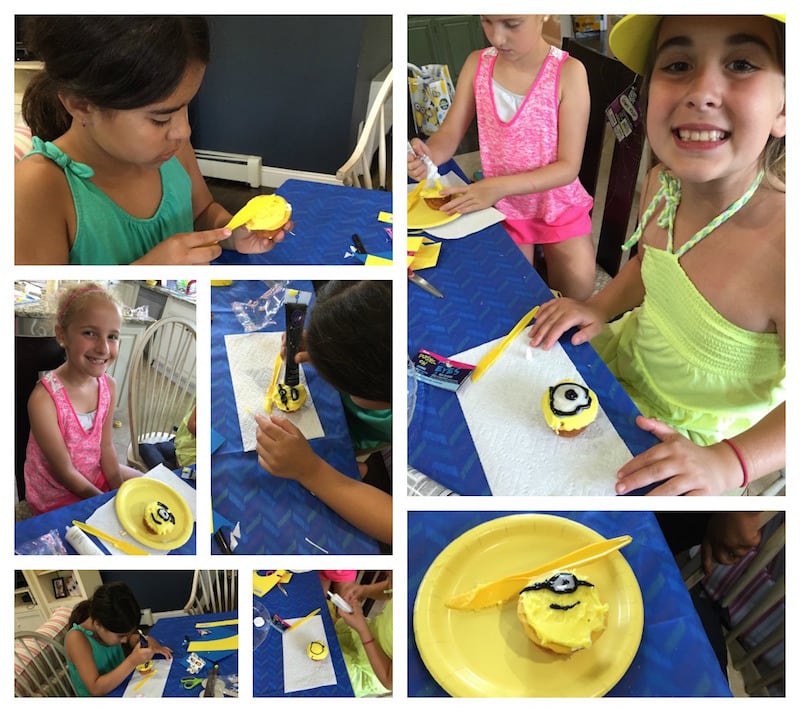 I told all the kids that after they go and see the Minions movie on July 10th, they should go home to their kitchens and REMAKE these cupcakes. I didn’t have time to actually MAKE cupcakes (keeping it real here – not going to lie), so I had them ice over some store bought ones. They had so much FUN !!! 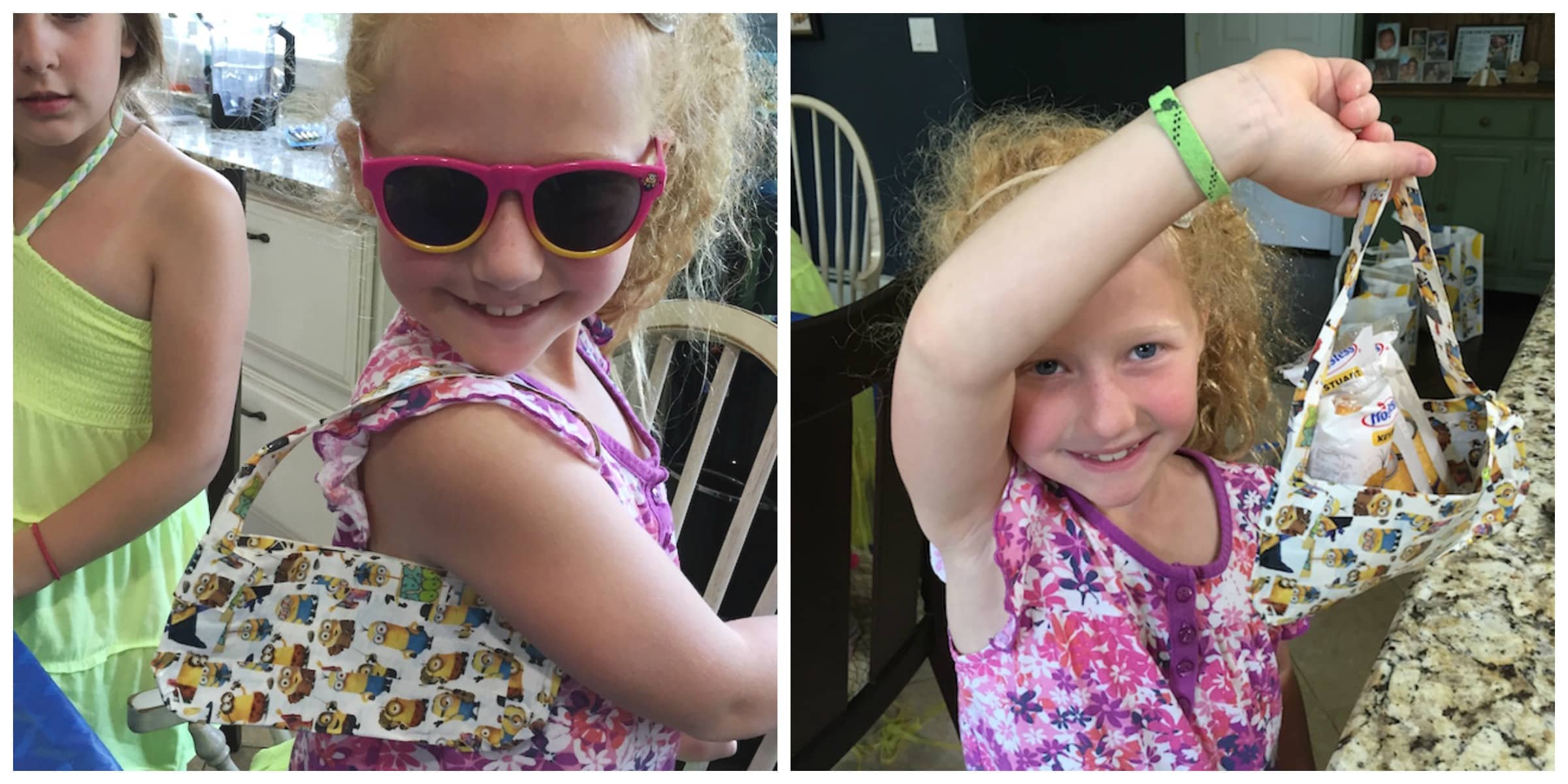 Last but certainly not least was my FAVORITE craft of the day — duck tape purses and wallets. HOW FUN, right?? We use Minions Twinkies as stuffers. Perfect takeaways! And PS – did I tell you that some of the Twinkies were banana flavored? I can’t!!!

Make sure you head to the theatre on July 10th to watch the new Minions Movie. If you throw a #MinionsParty of your own, tag me on Twitter / Instagram so I can check it out!! @VeraSweeney 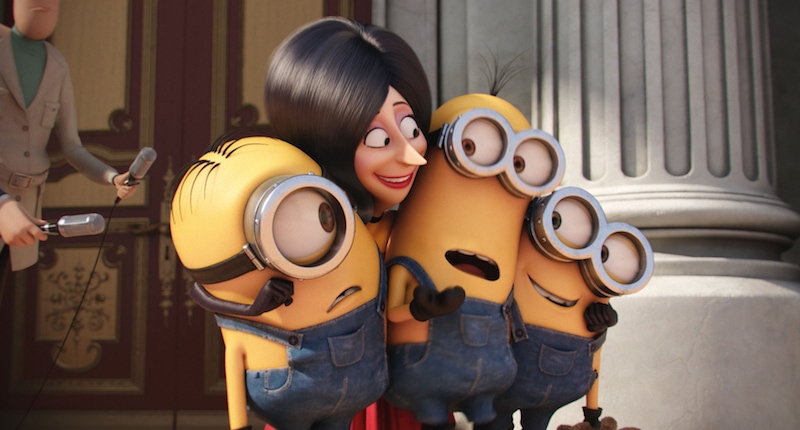 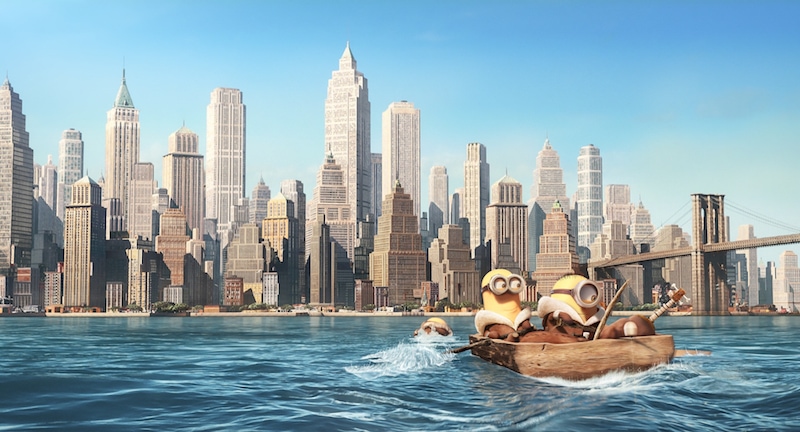 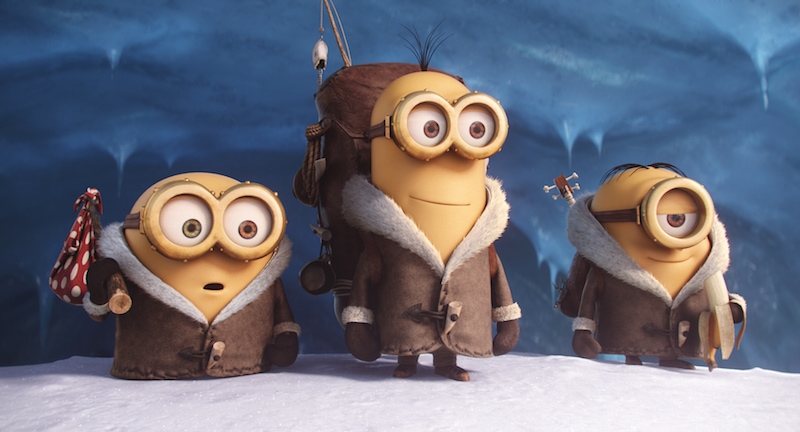 The story of Universal Pictures and Illumination Entertainment’s Minions begins at the dawn of time.  Starting as single-celled yellow organisms, Minions evolve through the ages, perpetually serving the most despicable of masters.  Continuously unsuccessful at keeping these masters—from T. rex to Napoleon—the Minions find themselves without someone to serve and fall into a deep depression. 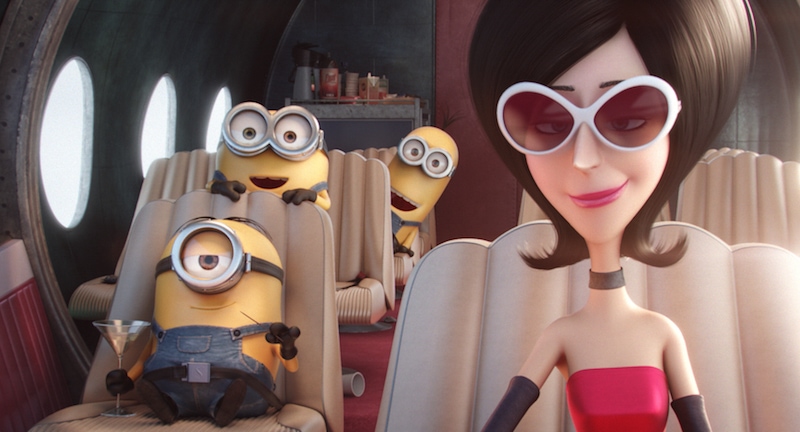 But one Minion named Kevin has a plan, and he—alongside teenage rebel Stuart and lovable little Bob—ventures out into the world to find a new evil boss for his brethren to follow.

The trio embarks upon a thrilling journey that ultimately leads them to their next potential master, Scarlet Overkill (Academy Award® winner Sandra Bullock), the world’s first-ever female super-villain.  They travel from frigid Antarctica to 1960s New York City, ending in mod London, where they must face their biggest challenge to date: saving all of Minionkind…from annihilation. 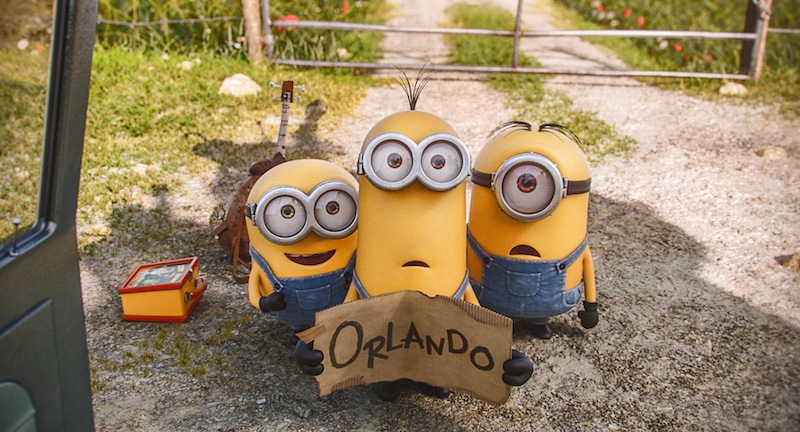 This July, go back to where it all began. ‪#‎Minions is in theaters July 10!!

Want to see a video version of my party? Check out that day’s DAILY VLOG here:

* I’ve teamed up with the Minions Movie to help spread the word about their release date. All opinions are my own. 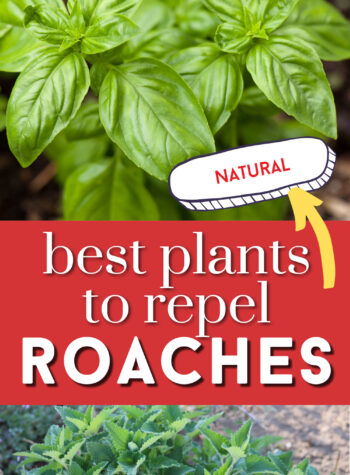 The Best Houseplants To Get Rid Of Roaches In Your Home 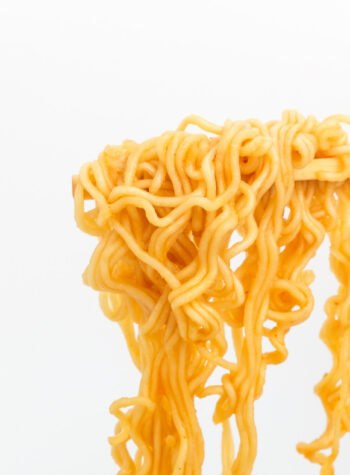 Expired Ramen Noodles: How Long Can I Stretch It? 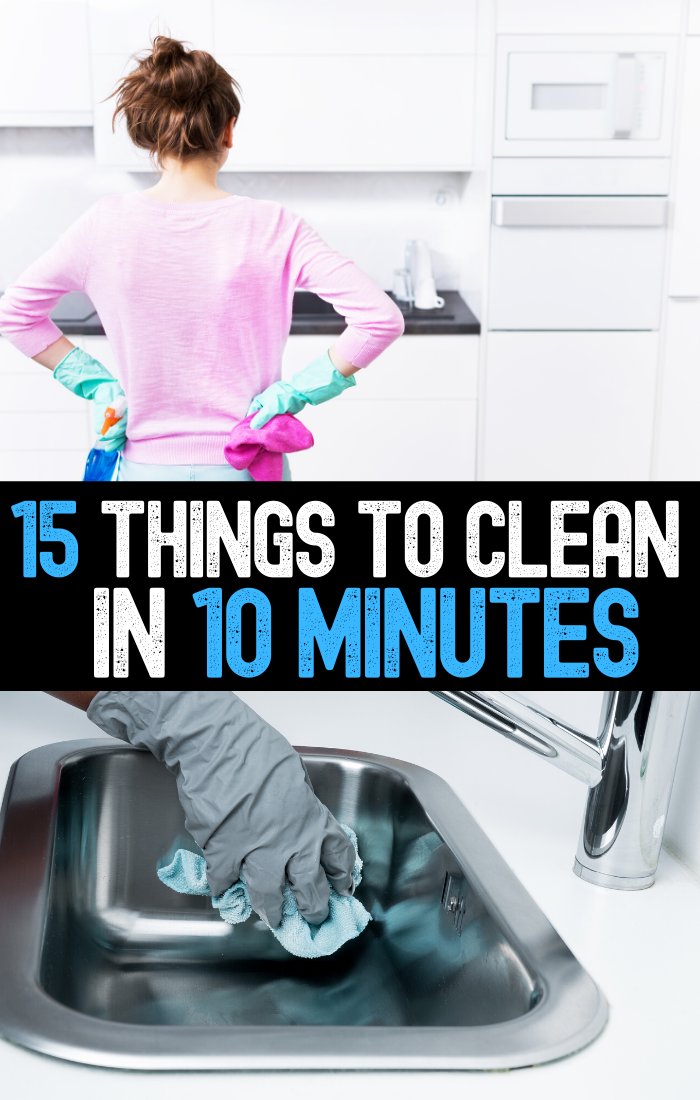 15 Things You Can Clean In 10 Minutes – Speed Cleaner Tips