Ok, seriously. I had the BEST time interviewing Luke Evans and Josh Gad from Beauty and the Beast. It all started out with a live performance spearheaded by T-H-E Alan Menken. WHAT? As someone who grew up loving The Little Mermaid… this was HUGE. Luke and Josh walked on stage and surprised the crowd with a song and started off the day with a big bang. Love a press day when it is filled with positive energy and every single person was beaming after their rendition! 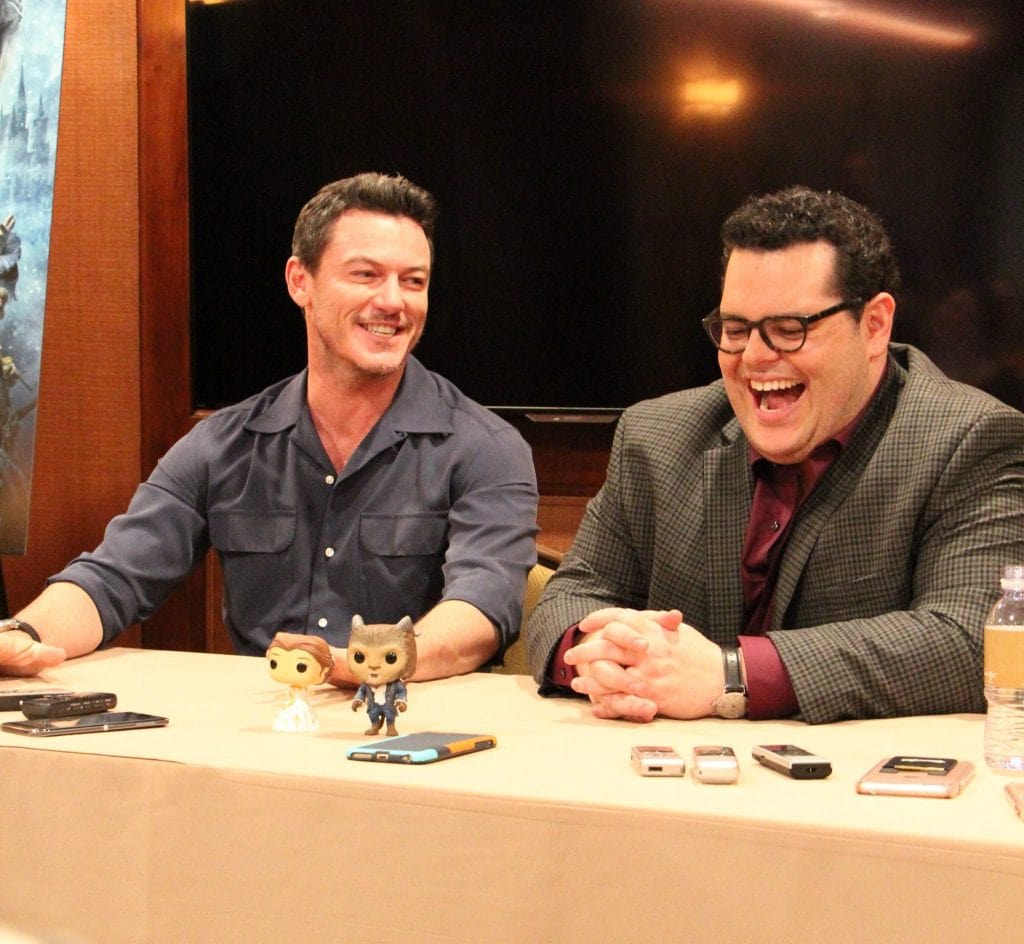 Onto the interview! As soon as these two walked into the room, they were laughing and joking and had a connection that was undeniable. True friends. I felt it. The entire room felt it. I had to ask them about their off-screen shenanigans because I felt like they had a few … dozen. LOL!

Luke: We cause trouble wherever we go. But make people laugh in the process. It was just a lot of fun playing these characters. You know, first of all, we were massive, massive fans of the original. You know, we were both kids when they came out. He was 10, I was 12. I was in South Wales, he was in South Florida. And the climate was rather different.

It probably meant even more to me ’cause it was always dark and gloomy where I came from. So to go in and watch a Disney film in the little cinema in our village was the highlight of my year! Always was. And to bring them to life, we both felt very lucky. And we knew that we could have a lot of fun and laugh. And there were moments when some of the funniest moments we had, I think are things that we made up on the moment. 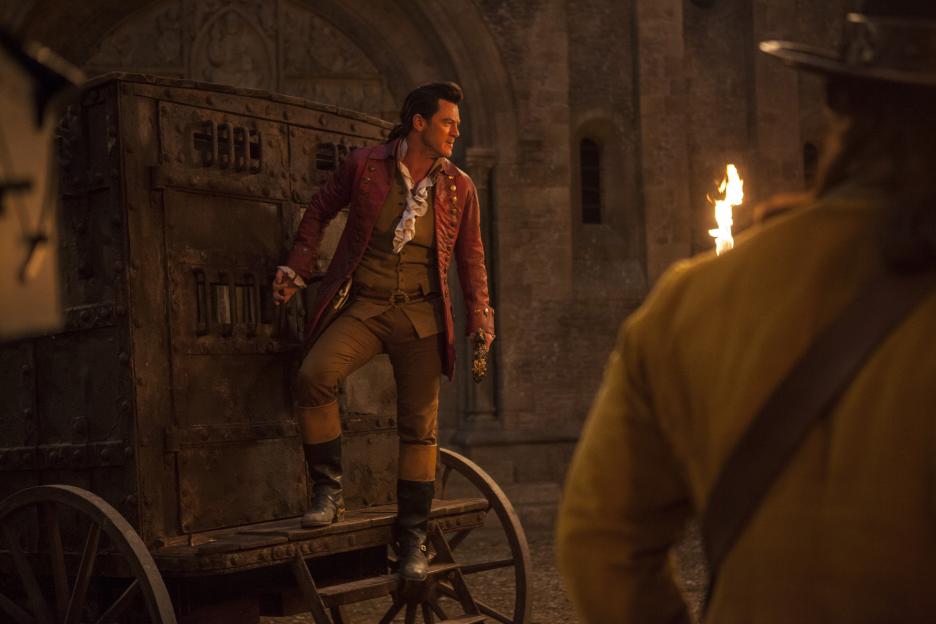 JOSH: The first sequence when the two of us are riding in that wagon with Maurice. That whole idea [LAUGHS] of calming Luke down with stories about the war was something that we literally came up with on the spot. Yeah, weirdoes and widows – all that.

We had about like 30 variations of it. Some of them were even more insane than what you see on the screen. But you’re always hoping, when you get paired with somebody – and I’ve had a couple of those films that I’ve done, where it’s all about the chemistry between the two characters. And the day I met Luke, especially because I didn’t even realize we both came from musical theater.

Luke from the West Side, me from Broadway. And so we have this common language and this common understanding. And this common goal of wanting to do justice to a movie that was so – I cannot stress this enough – so pivotal in our childhoods. 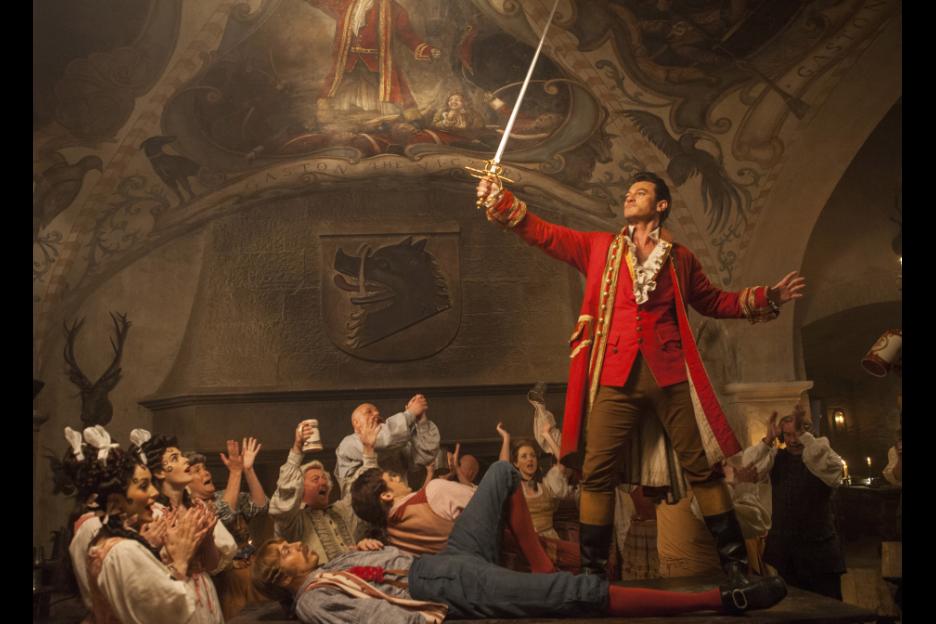 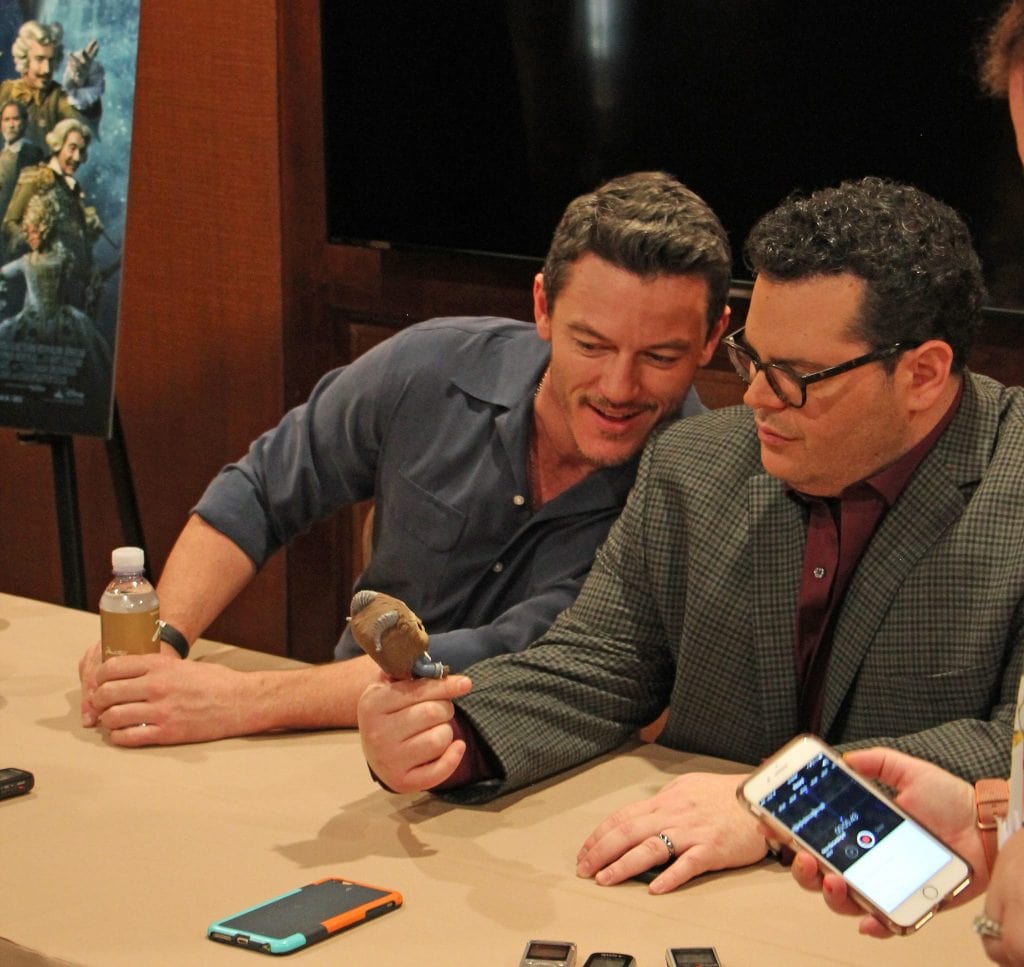 I do want to note – both are excellent singers. I had NO CLUE about Luke because I know this more from his Dracula days … not his Broadway days. I am a horror buff, so to see him in a singing role and to NAIL it was shocking and surprising and magical!! Super amazing! I could have sat and listened to these two chat all day. Such good friends – truly. Nothing stifling about them.

Speaking of horror, most of Luke’s roles have been unseen by his godchildren. They’ve been begging for a role they can watch and.. they finally got their wish with Beauty and the Beast.

Luke: My godchildren are very young and I’ve got lots of kids in my family, who are just a little tired of me noodling movies that they can’t watch. So, the day that I got offered it, the first thing I did was text all their parents and just say to them, “I’m gonna be in BEAUTY AND THE BEAST, and they can finally come to the cinema.”

And they all were at the London premiere. And weirdly, they were happy but also a little sad that I was the bad guy. Oh yeah, yeah, yeah, all right. Well, you know, I’m the baddest guy, you know? He is! Oh, we can’t win on here! Like…it’s a process, all right?! 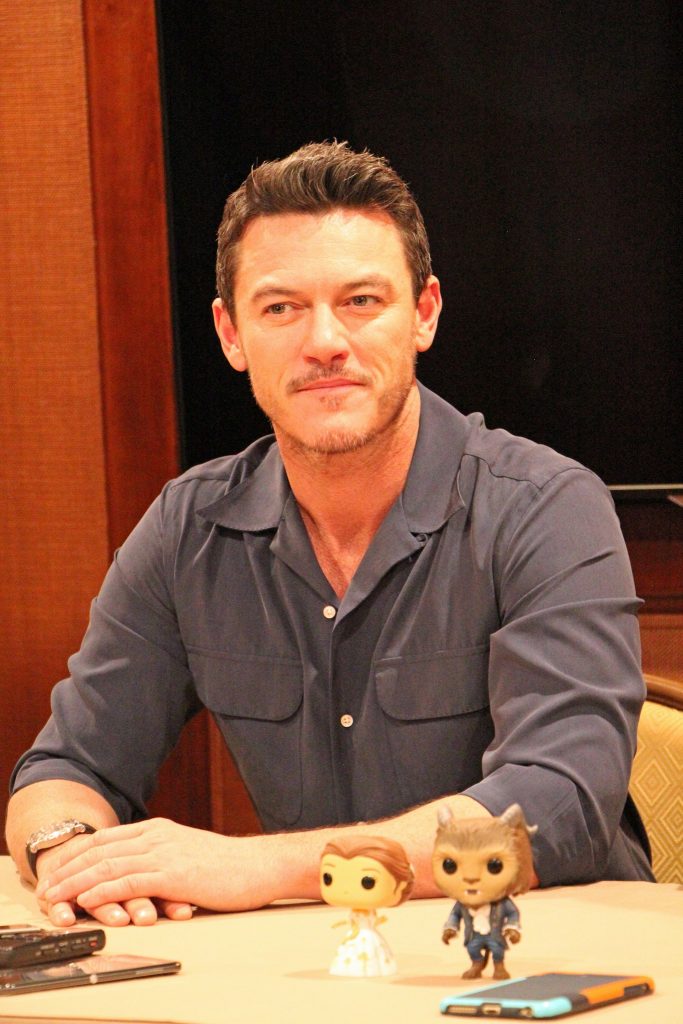 And what about trying on that famous Gaston costume for the first time? We’ve heard over and over again that you truly feel like the character once you put on their garb. Luke agrees.

Luke: I’ve always said, and I always will say, because I think it – a massive part of my creation of a character, especially somebody like Gaston – the look is half of his ego. You know, the hair and the fitted red leather. You know, we went to about four or five incarnations of that leather jacket before we found the right color of blood red. That represented the sinister part of his nature. Because I don’t know if you noticed, but that red jacket which is obviously so synonymous with Gaston in the original. And it’s the same here. That only goes on when he puts Maurice into the carriage to lock him up. And that’s the first time you see it. And we made that conscious decision. When you put something on like that, there was so much work in it, those buttons all and antlers on each button. And I had a pinky ring which was an antler impressed into red stone.

It was all antler themed, as you can imagine. It looked fantastic and you put the wig on and there you go. I remember taking it off on the last day and my hair and makeup lady’s like, “Okay, well, say goodbye to the final time. See you, Gaston.” And she took it off. And then I said, “Well, hello you.”

But he was a hard character to let go. I think we both felt very sad to let them go. Because we’d had so much fun and brought so much happiness to villains, it is to make people laugh. That’s quite a gift, you know, because usually you just make them hate you. But we had the opportunity to do both. 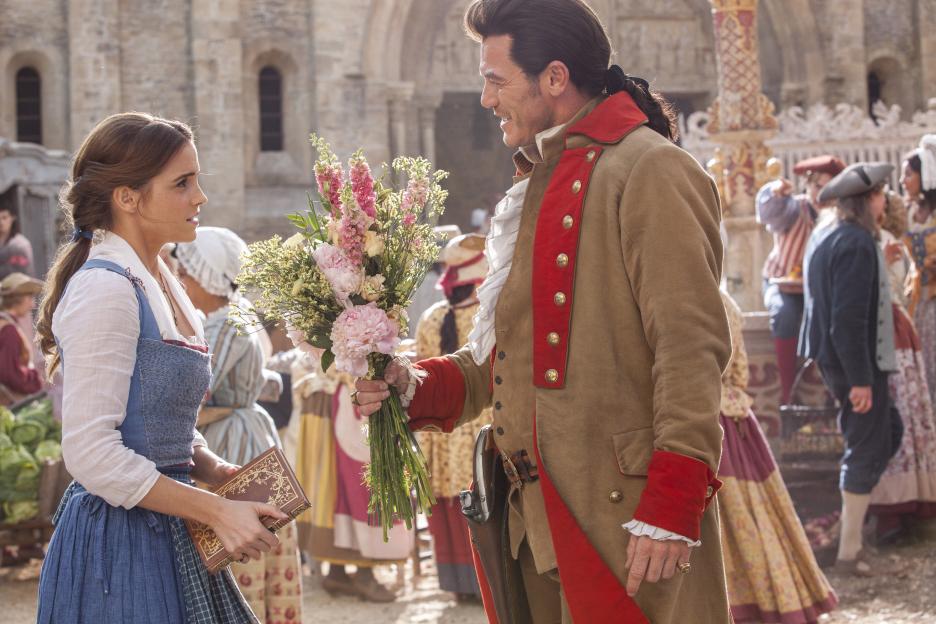 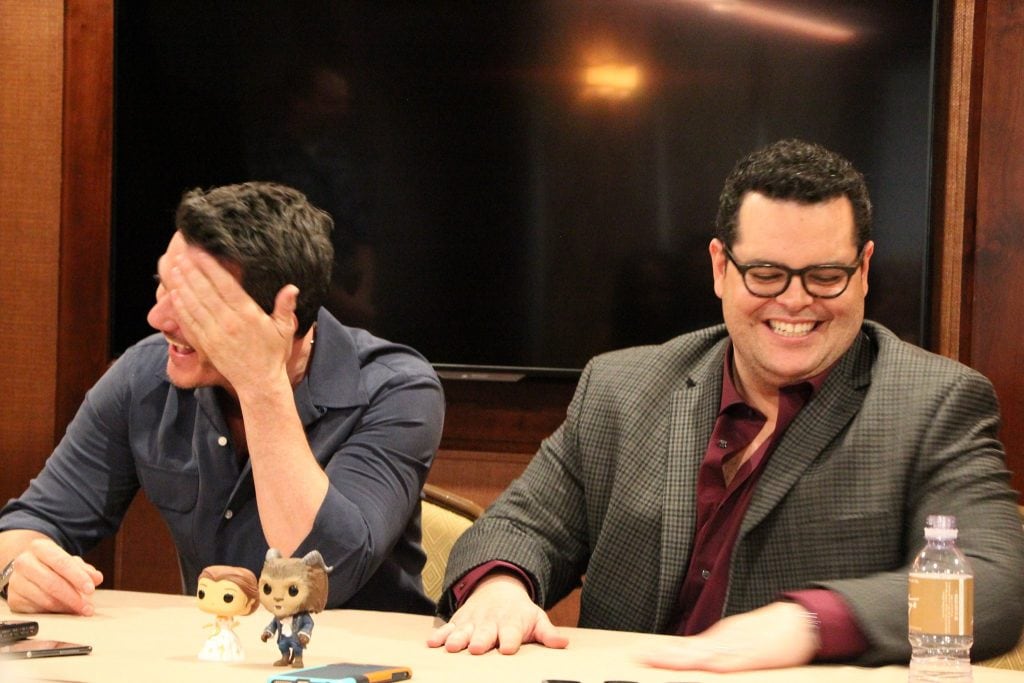 We always end up talking about favorite scenes with actors and if I’m being honest with you, I’m not sure which scene is my favorite.There was a moment that made me cry – but it was for only an instant. It didn’t really have much to do with the storyline and it has to do with Chip. I think I want to say that that was my favorite sub-scene. I won’t spoil it for you because it happens within the last 5 minutes of the movie. But as far as Belle and the Beast are concerned, they were all so visually beautiful. I just can’t PICK!!! Luke and Josh had favorites though. Guess which leads they involved? 🙂

LUKE: It would have to be for me, the Gaston tavern sequence. For two reasons. One, my song. Two, it was the one piece of the whole film where we got to rehearse for four to five weeks. Because it was incredibly technical. So we had all the villagers in the room. There’s vignette stories going on which you have to watch it a few times to know that, all that took a lot of time. And honestly, the music was playing throughout the whole thing. And we have to get them [SOUNDS LIKE: to rubes], onto tables. And there were swords, there was murals that we have to reflect in the back of each shot.

There was a lot of stuff going on, which took time and development and collaboration and a lot of working it out. But that’s what we come from. We have come from the theater, we’re used to that rehearsal experience. And so to have that on a film, was a joy. Also, we got paid a month more.(Laugh) 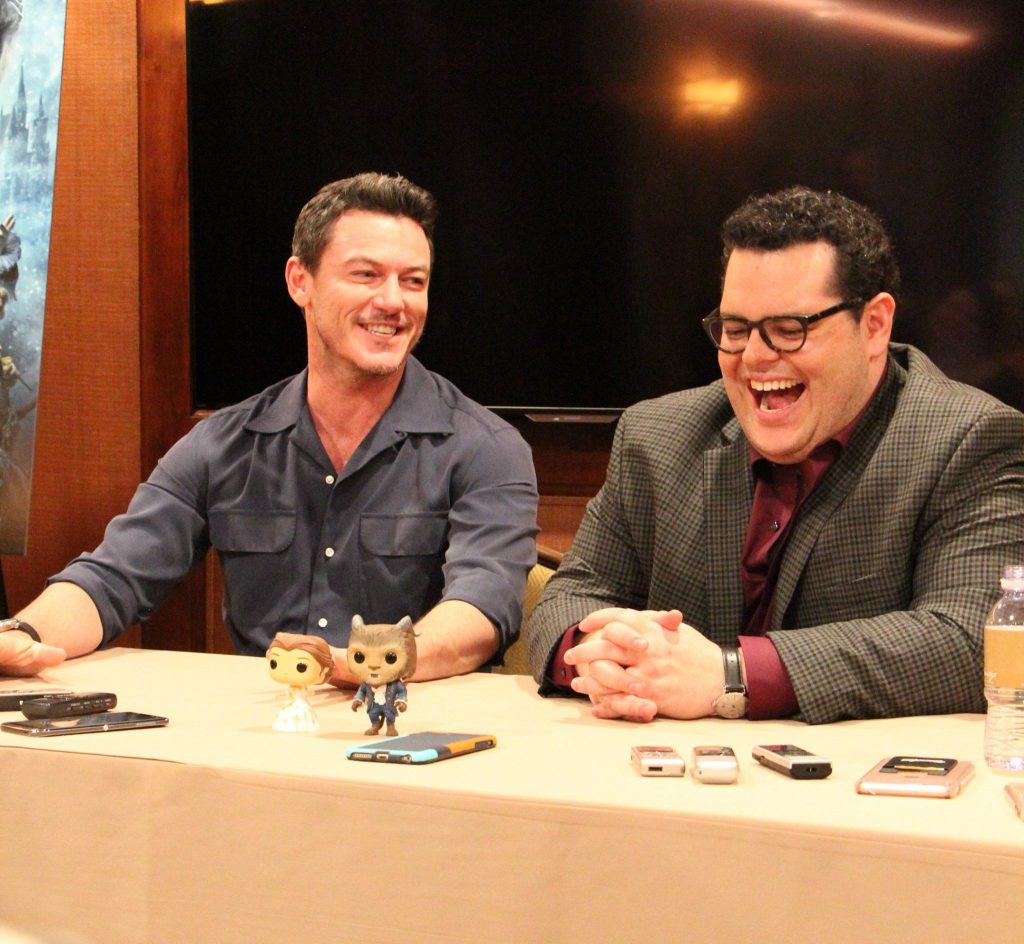 Josh: Not to sound redundant, but it is Gaston. You know, it’s so rewarding to watch an audience now, after two years of working on this in some capacity or another. To now share it with an audience. And see the adrenaline boost that it gives the film when all of a sudden, out of nowhere this up-tempo song with people dancing on the table.

You can feel the energy of the audience wanting to jump into that. And raise a glass to Gaston alongside you. And that is the brilliance again of these Menken and Ashman songs, is they are so unbelievably addicting. And Luke and I have now been singing this song in one way or another, for two years. 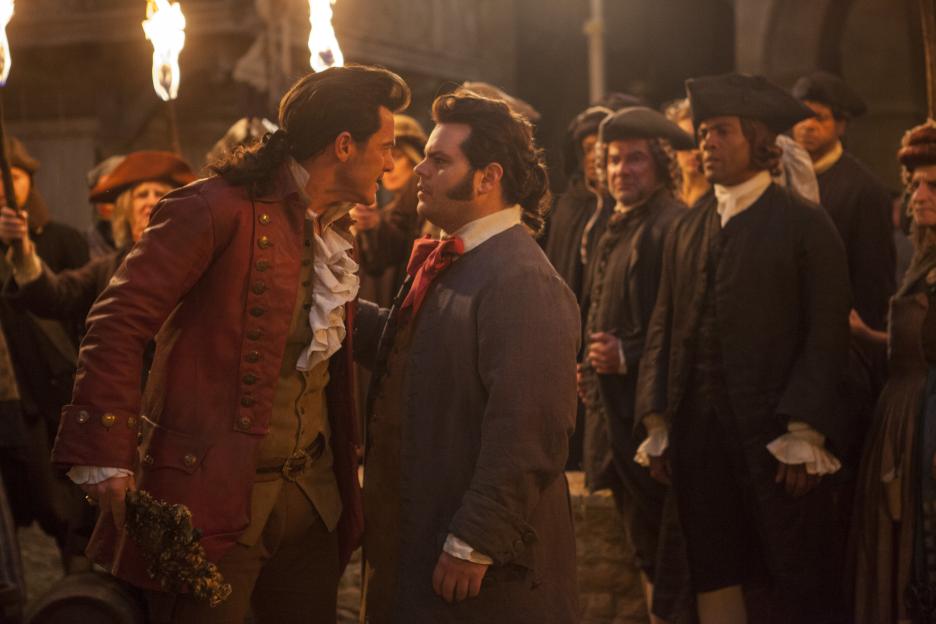 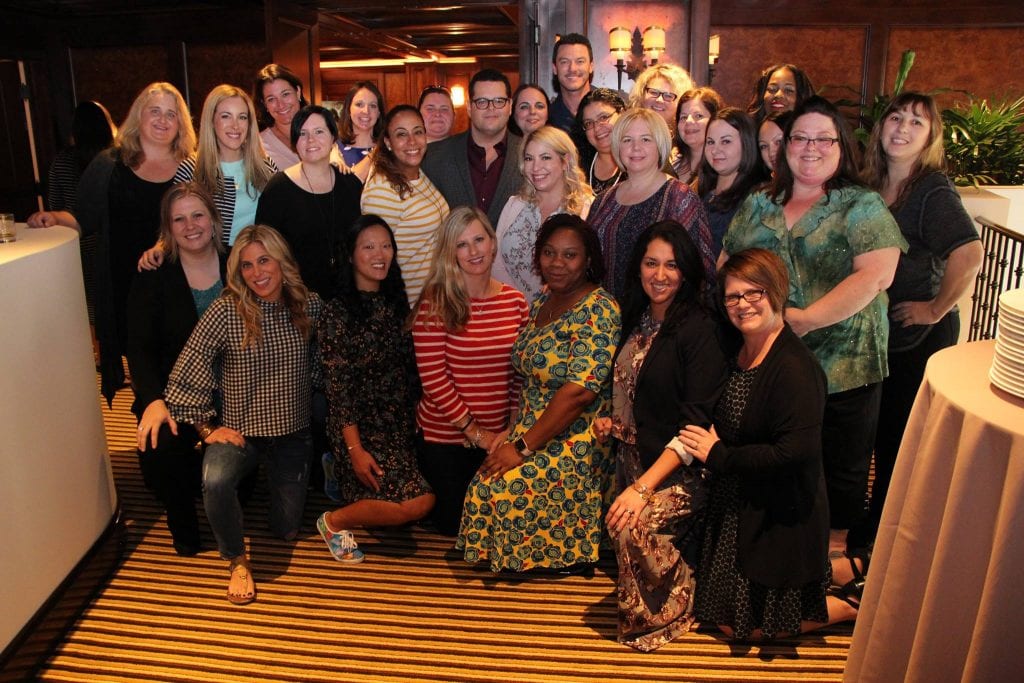 I can’t wait to see what scene will be your favorite!! Mark your calendar because Beauty and the Beast hits theatres this weekend!!

*Disney invited me to California to interview the cast of Beauty and the Beast. Accommodations and Travel were covered.