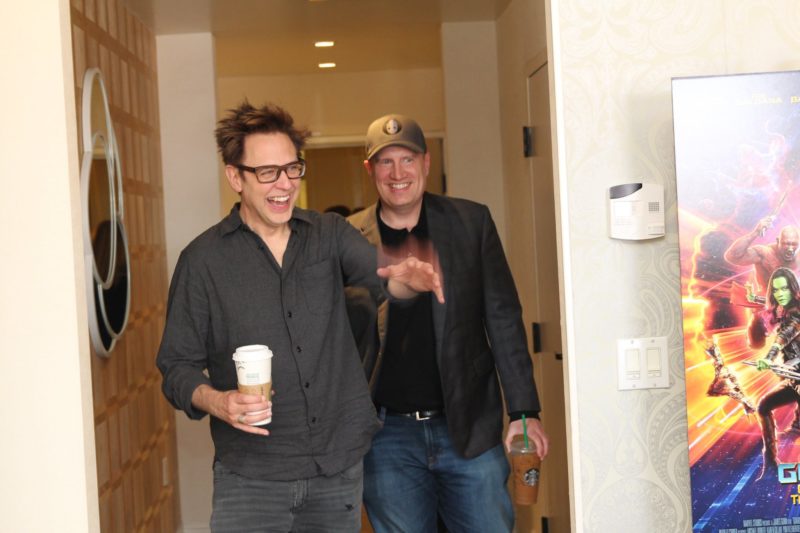 Everyone was so excited to have a sit down with Guardians of the Galaxy legends James Gunn and Kevin Feige because they are the keepers of the knowledge. I mean, if anyone knows the secrets behind the sets, the stories that unfolded between the lines, or the history of what didn’t make it on the big screen – it’s the President of Marvel Studios and the producer of this weekend’s blockbuster hit.

Did I say President of Marvel Studios? Why, yes I did! 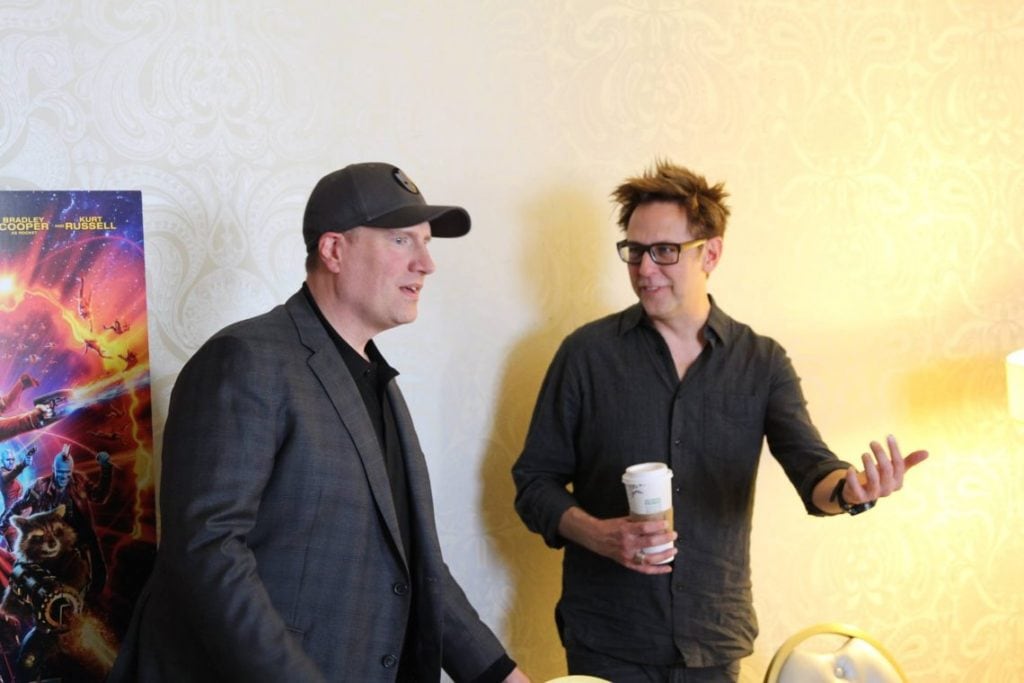 I did everything in my power to not whip out my headshots and catapult them onto his lap. I mean… how often do you get to sit with THE MAN?! TWO MEN? Everyone was flipping out. Huge fans in the room. BIG TIME. Guardians of the Galaxy and beyond. This was an incredible interview and I just have to thank Marvel and Disney one more time for allowing us the time to do it.

Right off the bat, we set our eyes right on James and asked him to tell us a little more about Adam. If you are a comic book reader, you know that Adam is m-a-j-o-r. Did James give up the goods?

That’s all we got from him. What did you think? Did you honestly think that James Gunn was going to tell a bunch of mom bloggers the secrets of Guardians of the Galaxy 3? I mean, pah-lease! Even with that truth serum, I placed in his water bottle, it didn’t break him. UGH! 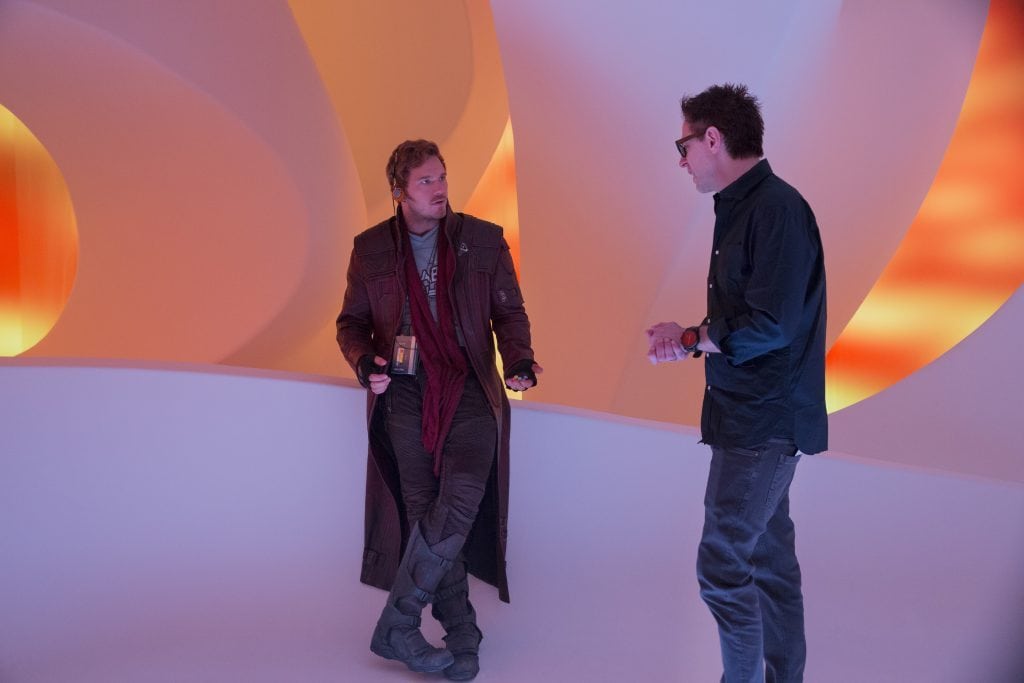 Ok, so we moved onto the music. We all know that music is a huge part of the Guardians of the Galaxy franchise. Full confession – while most of the people loved the music from the second movie more, I actually KNEW the songs from the first movie and didn’t really know many from the second. Anyone else feel that way? Maybe it is my age or something?? I don’t know? Either way, James opened up a bit about the process of selection.

Sure. I mean, you know, listen. I have a list of about 500 songs, which I think of as, like, Guardians-type songs that Meredith Quill might really love.  And when I’m going through and I’m writing the script, I put the songs into the script where they seem to fit.  And sometimes I don’t have a song that seems right on that list, and so I have to go out and search, and listen to a bunch of stuff, and see what I like, you know.  And — but eventually, it’s all basically baked into the organic story of what’s happening in a movie, in the same way you put, you know, sugar in a cake.

There’s nothing I get more tweets about than “you oughta put this song in Guardians of the Galaxy.”  But that’s — those are the nice ones.  The mean ones were, “If you don’t put this song in Guardian of the Galaxy, I’ll never talk to you again.”  I’m like, “Okay, don’t talk to me.”  But it’s — but they always say, and they’re always songs that I know really well, ’cause I’ve studied my Seventies music, especially since starting on this series, and somebody sent this song by this band called Silver, called “Wham Bam.”

And I’m like, “I’ve never — what is that song?”  And I went and I played it, and I’m like, “This is a really cool, like, total Seventies pop song that is so different.”  And then I was like, “Is this, like, a fake song?”  I thought it was a modern band with, like, a retro vibe.

Had to go and do some research on it, and found out that it really existed, and then I put it in the movie.  So, I wish I knew who that Twitter person was!

We need to find that Internet hero!! Who are you!? 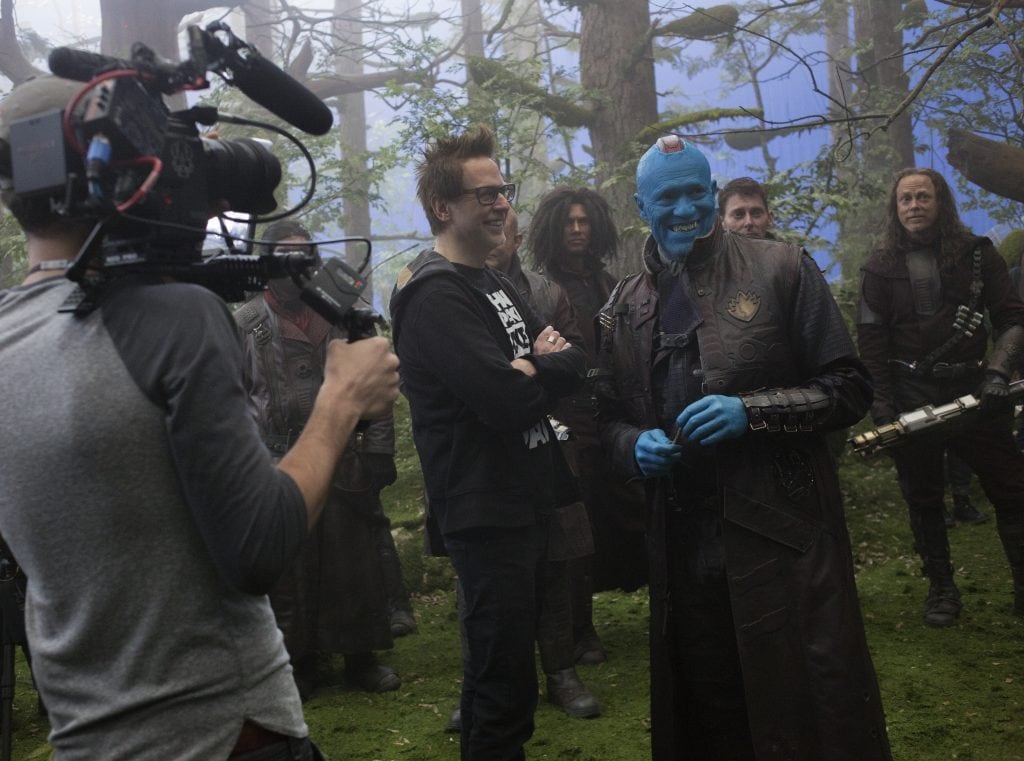 Speaking of songs, Kevin admitted to the group that there is a new Guardians of the Galaxy ride opening up in California Adventures and guess who chose the music???

There’s a Guardians of the Galaxy theme park ride that is opening soon at California Adventure that features songs that James suggested as well, and a few other places coming up in the future.

I always love to hear about the process of a writer or get a sneak peek into the method of the madness. James gave us some info about how we worked with this treatment.

The other thing I remember is that when I wrote the treatment — I probably gave you the music with the treatments. I wrote a very in-depth treatment.  It ended up being about 70 pages long.  That number’s a little bit high because I put a bunch of photographs in there, of sort of, you know, things that make us know what the feel of things are.

But it’s more like a 55-page draft.  But it goes very much into depth, in the dialogue, every beat of the story, what’s happening.  I like to do that first.  But with that, I get — I have a disk that I give to the four, five people that read that treatment, and that disk has all of the songs on it that are in the movie.

My turn to ask a question! I had to bring up Gamora and Peter’s slowly evolving relationship. Two movies without a kiss yet? How very UNHollywood!!  It felt like this was what James wanted us to see and he was holding them back for a reason, so I had to know WHY?!

At the end of the movie we have a moment between the two of them, where I think something is acknowledged, you know.  And Zoe and I actually talked about this for a long time last night at the premiere, at the party after the premiere, and there was a time when we had discussions and talked about having a kiss in the movie.  But it seemed to be…we tried to treat these characters with such respect and such love.

I don’t think that Gamora is a character who would be swept up in the moment by passion, and if she was, I think she would have to deal with the ramifications of that.  I don’t think she would be easy on herself about it.  And so, I think at the end, what we see between the two of them is such a truer love story.  Where she loves him, and he loves her, and she acknowledges that at the end of the movie, but that’s a love that’s based not only on attraction but on a really deep friendship that the two of them have.

A partnership that we see at the beginning of the movie.  That they’ve changed a great deal.  At the beginning of the movie, they’re great friends.  She’s a great support to him when he’s, you know, making this decision, and he respects and loves her.  And so I think seeing that emotional part of their movie, er, of their relationship, is a culmination of what their relationship is in the movie, is more powerful than seeing a kiss that is romantic and would make us feel happy and feel good, but wouldn’t be as true. 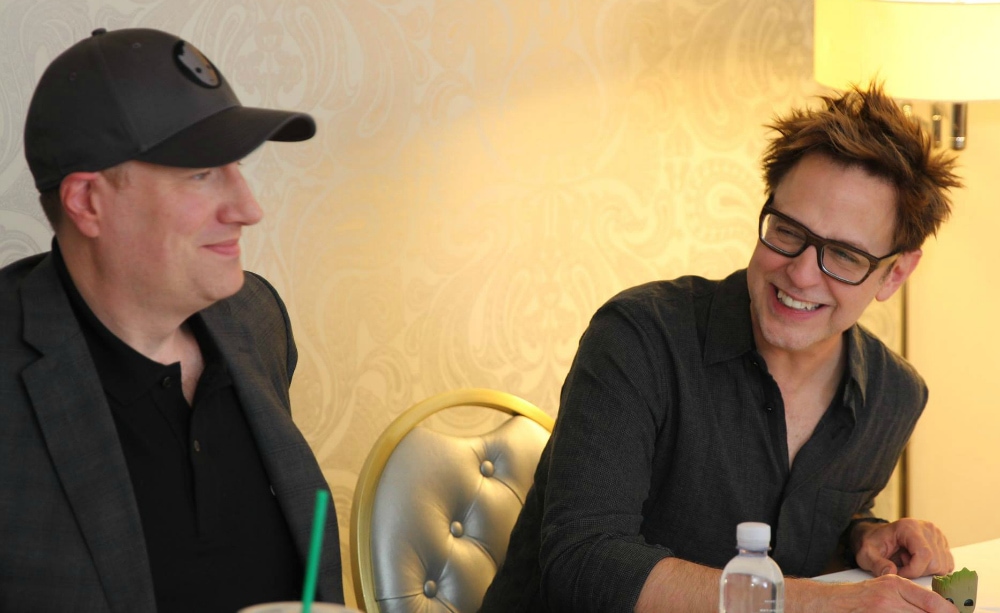 I mean… this just leaves hope for me. So, I’m good. You know!! Add me into script, James. Another half-Earthling enters the galaxy and gives Gamora a run for her money. LOL

In all seriousness, Kevin agreed with the decision. He didn’t think the movie needed a Hollywood moment.

It’s the difference between a truthful, emotional moment, and a Hollywood moment, and that was very savvy of James to navigate that. 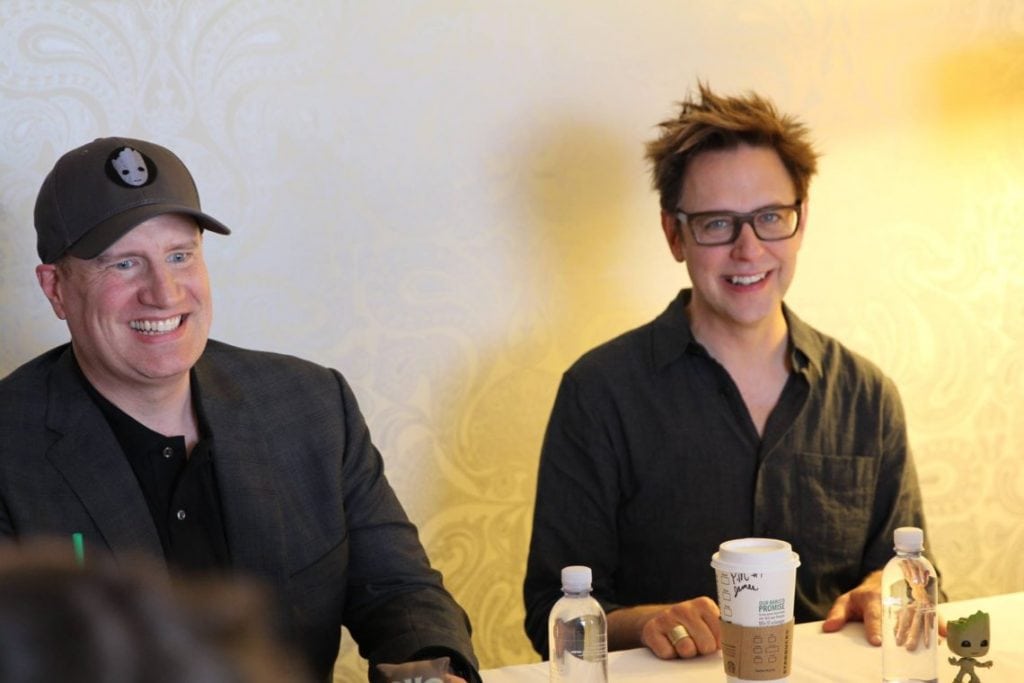 Let’s talk about the Avengers now!! How the heck are the Guardians of the Galaxy going to fit into such a large movie without losing themselves or their team’s dynamic? Kevin told all of us not to worry.

I mean, as with all of the connectivity between our characters on various films, you have to be careful about it.  I mean, we never want it to just seem like characters are popping their heads out of windows and saying “Hello” and then going back in.

Believe me, it’d be easier to do it that way, but it’s — but it wouldn’t be as satisfying.  So a big role, a small role, regardless of the actual screen time that any single character has, and I think you’ve seen this in the Avengers films, and in Civil War last year, it’ll be very meaningful and very important to the story that we’re telling. 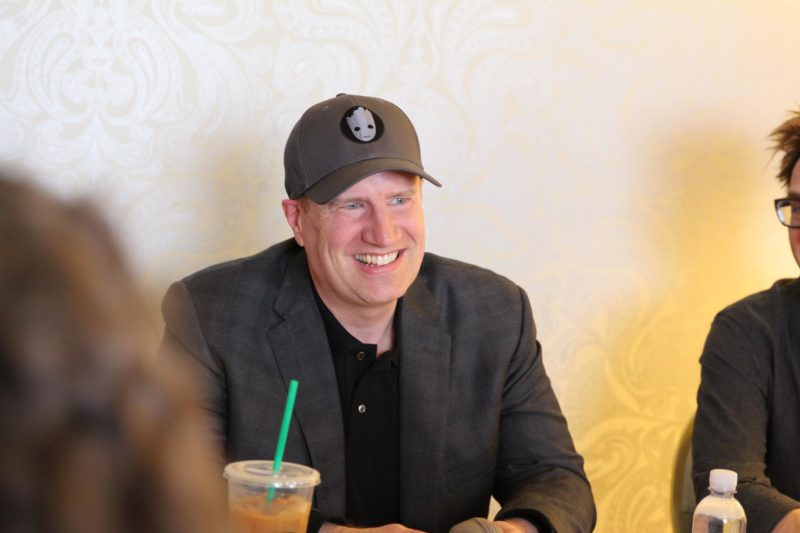 Ready for another big surprise!? Miley Cyrus is a Ravager. No, really! She voices Mainframe.

Miley Cyrus.  A scoop.  That’s a real hot scoop.  Miley Cyrus has a cameo in the movie.  I’m a hundred percent serious.  I was watching the voice, and I’m like, “She’s so likeable.” And her voice is awesome.  I’m like, “She’s got the best voice.”  And then I wrote this thing and I went in and I said, “Kevin, what do you think about casting Miley Cyrus as the voice of Mainframe?”  And he was like, “Well, I’ll see if we can get her.” And then I got her to do it. 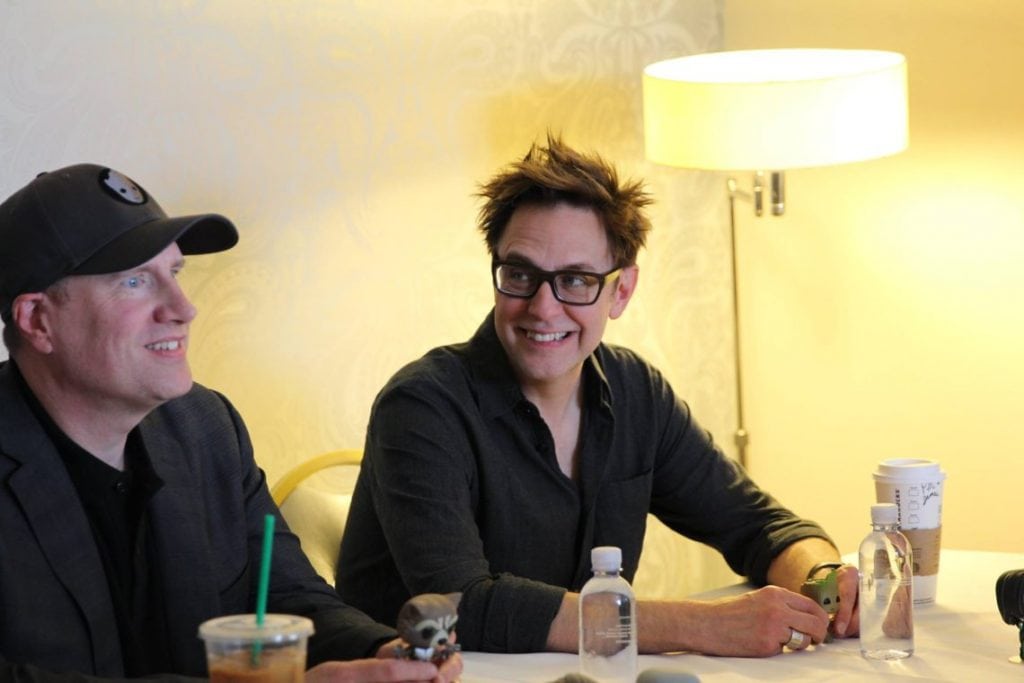 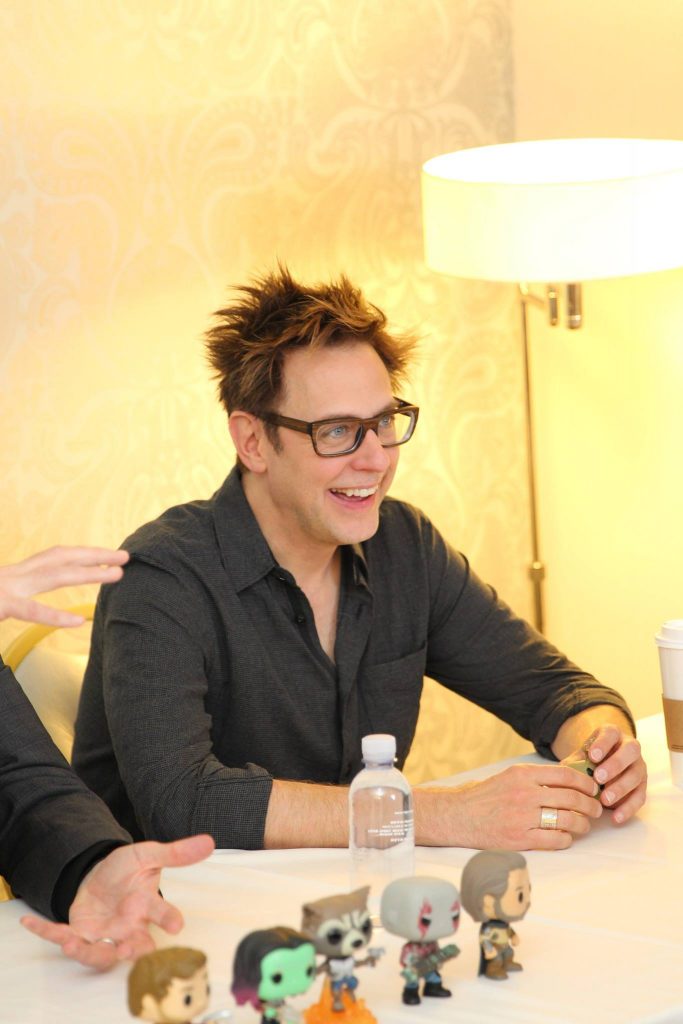 So, this last quote that James said sort of resonated with me. So much in fact that I started to push a “social good” component in my Permission to Hustle Facebook group because it’s time I start giving a shit about things myself. James was asked how he came about landing this role and he said up until Guardians, he prided himself for not really caring about one gig or the next. He actually thought that’s why he did so well in the industry. Well, Guardians of the Galaxy was the first time he ever really wanted something…

You know.  It’s weird.  In the first Guardians movie, the Guardians say, you know, “Maybe it’s time to actually give a shit about something.”  And this is being completely honest.  It’s like, I had a lot of success doing things in Hollywood, and I always considered that my strength was that I didn’t really give a shit.  Like, you know, I would go in and I would pitch something, and I’m like, “Well, if I get the job, then I’m gonna get money.  But if I don’t get the job, then I don’t have to work for a little while, and you know, I’m very lazy.”  And so I was like, I never — I — this fact that I didn’t care, I always thought it was my strength.  And for the first time in my life, I really — I really wanted the Guardians of the Galaxy gig.

That honestly had never happened to me before.  I had never done it.  And so it was a new experience for me in caring, and it’s so funny because that’s exactly what the Guardians are about. 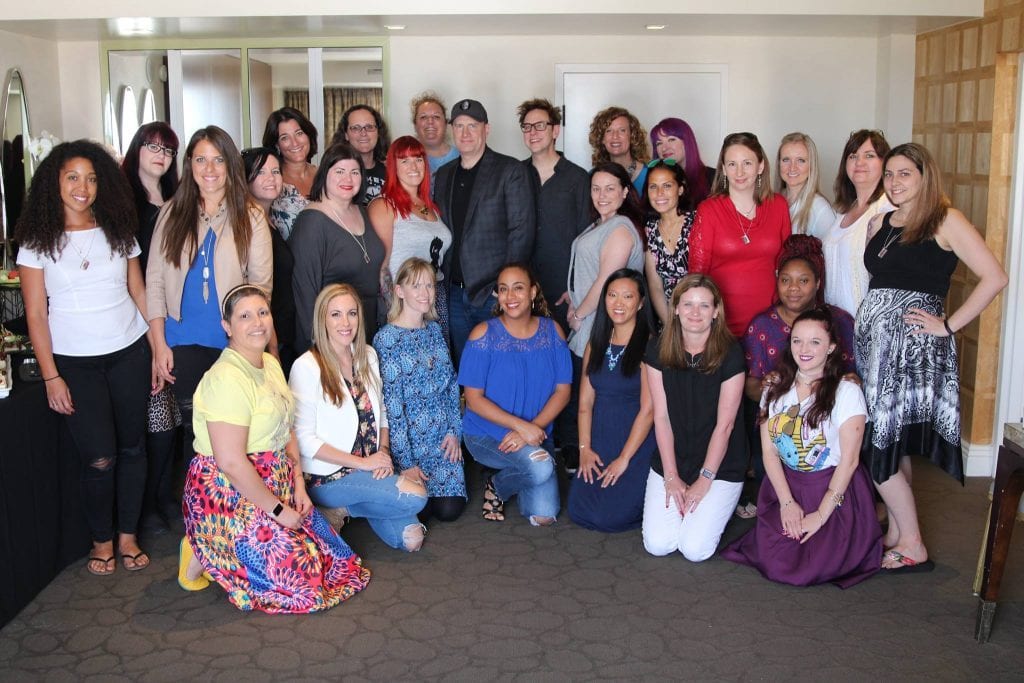 Guardians of the Galaxy Vol 2 is in theatres RIGHT NOW. Go and see it! OH SO GOOD. Kevin and James, if you are reading this, I want to be in Guardians of the Galaxy 3. I am for hire. Will work as a yellow robot hooker, a ravager or a straight up Guardian because I like to dream big and set no limits. Thank you! 🙂 WOOT

*Disney invited me to attend the press event and premiere for Guardians of the Galaxy 2. All opinions are my own.