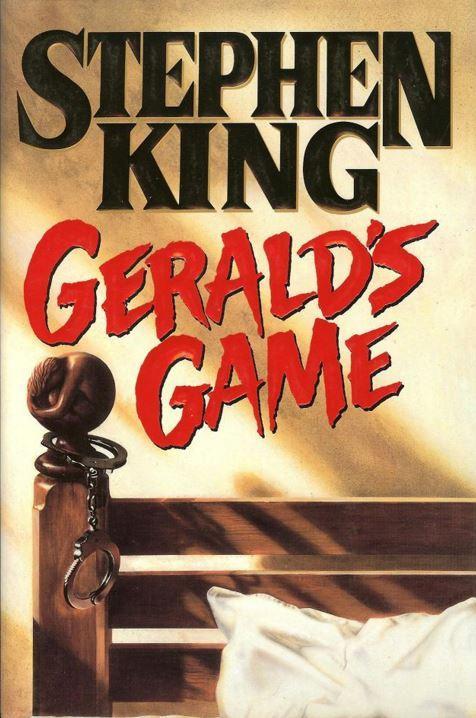 By the way, before I even get into the movie review, just a little note for you to keep in your back pocket –> don’t get handcuffed to a bed when you are in the middle of the woods and alone with your significant other. Just. Don’t. Ever.

While trying to spice up their marriage in their remote lake house, Jessie must fight to survive when her husband dies unexpectedly, leaving her handcuffed to their bed frame.

So, I first read that it was a supernatural haunted sort of thing. I don’t know WHERE I READ IT, but it was PRETTY WRONG. The whole movie is about a woman losing her complete mind because she is handcuffed to a bed after her husband DIES while on a getaway. I don’t want to give away too much because I still think you should see the movie, but I have to warn you about a few things.

If I knew we were going to go there, I wouldn’t have even turned on the flick. Not for one second. But once I started, I had to complete the journey. What a creepy story. Within five minutes of the movie, you know that dog is going to want to eat her. I mean – I’m not giving anything away here. The foreshadowing was so strong with that opening scene that it knocked me off my chair and tattooed the rest of the storyline onto my forehead. Leaving the door opened – what are you NUTS? Obviously not from NYC. I’m ranting. Sorry.

You know, the more and more I see and read things from Stephen King, I have to wonder where it all comes from. I mean, while most credit him as being a complete literary genius, I have to also admit that he is totally twisted and maybe not in a good way. Where do these storylines come from? I would never be able to sit down and write about a child getting abused by a parent. I just don’t want to give into those thoughts. But – time and time again – we see that’s exactly where this author goes.

My heart was racing the entire time – thinking what I would do placed in the main character’s position. I would have broken the wood.I wouldn’t have stopped until I pushed the bed over to the phone. I wouldn’t have given up. But … I didn’t have the life that she did, now did I? I am not a mouse.

The ending was meh. I know he wanted to wrap it up in a solid way and I think the biggest fear for King is always one that we can actually touch and feel and personally know. In the book ‘It‘, was the evil the clown? Or was it the town who ignored all the horrid evil that was running rampant through the streets? Turning a blind eye to injustice – that’s real. A clown who preys on children ever so often? Well, that’s how he gets you to read the book, I suppose.

I don’t like the real evils. I don’t want to face them. I don’t want to remember them. I refuse to pay to be submerged in them. And when I am tricked into doing so, well, it just shakes me to the core.

Abused women. Silenced women. Forgotten women. Yeah – I know a few. Maybe I’m part of that list? Breaking the shackles of our history is hard. Learning from them is an entirely different thing. Are we capable of either? Who knows?

“You aren’t real. You’re just made of moonlight.”

If only it were that simple…