Found An Old Diary From 2004: Some Dark Times Were Revisited 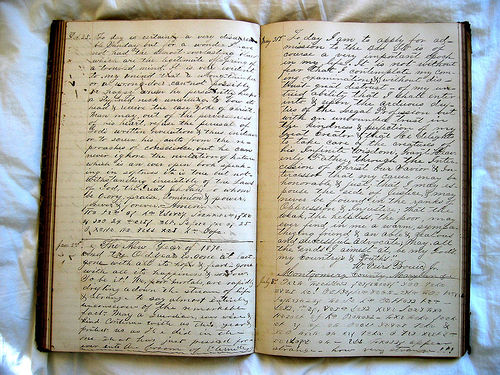 My daughter was cleaning up my closet for Mother’s Day (yes, I put her to work) and she came across an old brown leather book. I realized instantly that it was an old diary. I sat down on the bed to read it and learned that it was from 2004.

And it was very, very sad.

Just to sum up (on a very high level) where I was at that point so you understand… I wanted to have children the DAY AFTER I GOT MARRIED. Three years later – my husband was still fighting me on it. It was the only thing that I could think of. I was obsessed – consumed with the notion of motherhood. And I absolutely hated him for wanting to wait.

Three years of desperately waiting can weigh heavy on a girl. I began to resent him. To withdraw from him. It was pages and pages of feeling trapped, lost, confused, angry, hurt. I wanted out of the situation and I didn’t know where to turn. I actually left him a few times in the beginning because of this. But he always convinced me to stay – and thankfully I did.

It was only about 40 pages or so – but I read it all – and I started to cry because I remember feeling so helpless. I literally hated my husband – HARD. And I said some pretty raw things. The worst part of the diary? There were pages ripped out with little notes from me saying (“too honest – you won’t want to read this again”). It was like my old self was protecting my new self from remembering.

I would cry quietly whenever we were alone in our car. I remember thinking we were so close to one another (proximity wise) but so far apart (mentally). And he would never notice. I would just look out my door window and tears would fall. Never once did he notice. Reading that was really hard for me because I remembered all those times of feeling so alone.

And then there was a piece that I wrote revolving around a burn I received while cooking. I won’t get into it but … wow. I can’t believe I forgot about that.

Why am I writing this post? Because I just wanted to put it out there that there is light at the end of every tunnel. I am very happily married right now and if you saw inside my mind in 2004, you wouldn’t believe that this would be possible. But it is. Give things time. Have patience. And never give up.

We have all been hurt. We have all felt helpless. But we are all also very resilient and good always comes out of bad. So, if you are now where I was in 2004 (for whatever your reason may be) – have faith that it will all turn around. Just stay true to yourself and remember that you are stronger than you think.