Maleficent came out this weekend and I can finally share my Sam Riley interview! Have you seen the movie yet? What did you think? So excited it finally it in theatres. A BUNCH of my friends went and everyone loved it and I mean everyone. Yeah! I feel personally invested in this film. A lot of women were swooning over Sam Riley when he walked in the room.  I was so excited to speak to him because his character was one of the newer twists to the classic fable. The raven is a staple, yes. But this newer, updated version plays a very important role in Maleficent’s life. Birdman is one of the main reasons that Maleficent stays sane, stays kind, stays good – even during her darkest hours. Sam’s character is Maleficent’s best friend. And while this might have been somewhat true in the original, it is REALLY played out in the retelling because the raven can speak and turn in a human in this most recent version. 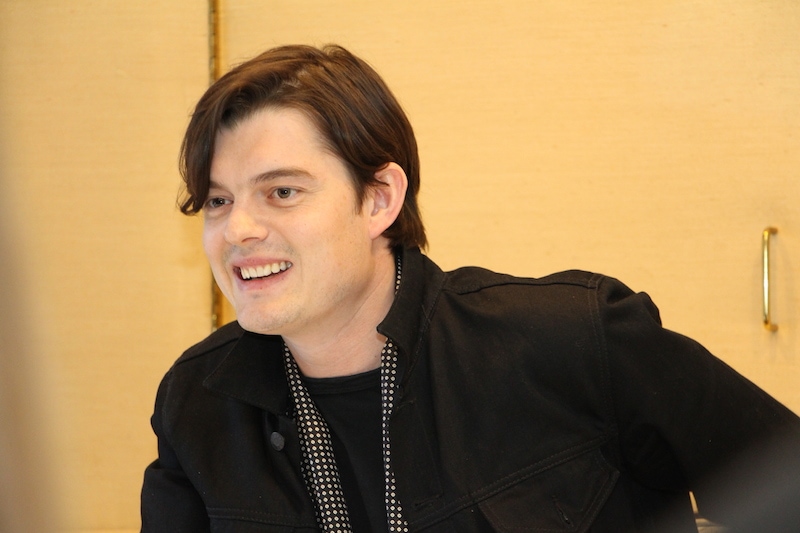 We asked Sam what it was like to work on this classic.

It was really exciting. Most of my films are sort of independent-type cinema that not many people go and watch. But they’re all great, obviously. But the script was really great. I loved it and the lady who wrote it had written the Lion King as well and lots of other big, Disney movies. I thought the way they did this was really interesting because what would make a woman or a sorceress curse a little baby? It’s like one of the worst things you could possibly do.

Also the fact that Angelina was going to play Maleficent was very exciting. 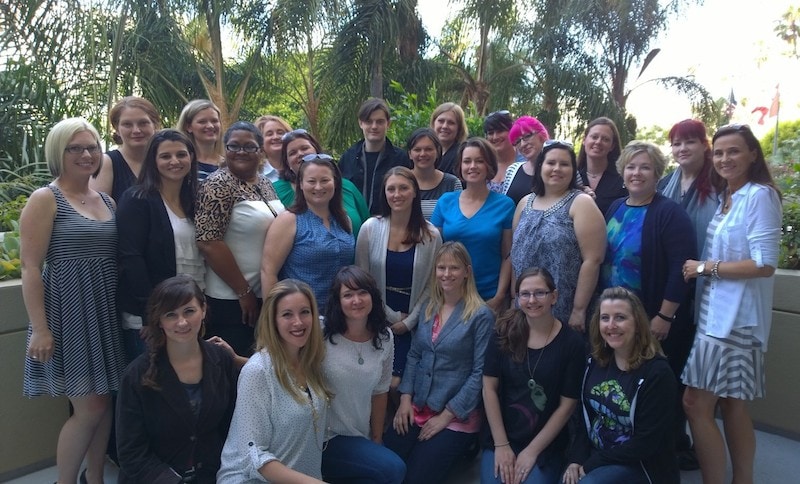 What type of research did Sam do to prepare for this role?

I watched the old cartoon but the raven always looks half asleep or something. So, they brought in some real ravens into a room about this big. I’d never seen a real raven before. I thought they were like crows but it’s like this big and it could do tricks and stuff, which is pretty scary.

When it gets its wings out… it’s as long as the table or something. You know, really huge. And they’re very intelligent and they’re kind of vain as well which I thought was funny. But I just watched this raven in a room for awhile – just to see if anything would rub off on me. There was a really nice lady who helped me doing a movement coach. We tried to copy bits of his movements. And by the end of the session I was actually running around the room flapping my wings.

It was horrific. She was, like, “We should film this.” I was, like, “Under no circumstances do I ever want to see myself running around a room on YouTube going [SQUAWK].” It was awful. But she said it would help because when you do something really stupid and embarrassing at the beginning – like when she turns me from a bird into a man at the beginning I wasn’t wearing very many clothes… which was a strange conversation to have for a Disney movie. Like, how much bottom can you show?  {Everyone laughed} So once you’ve done something really silly then it makes you more relaxed, you know? I should have done it before coming in here actually. 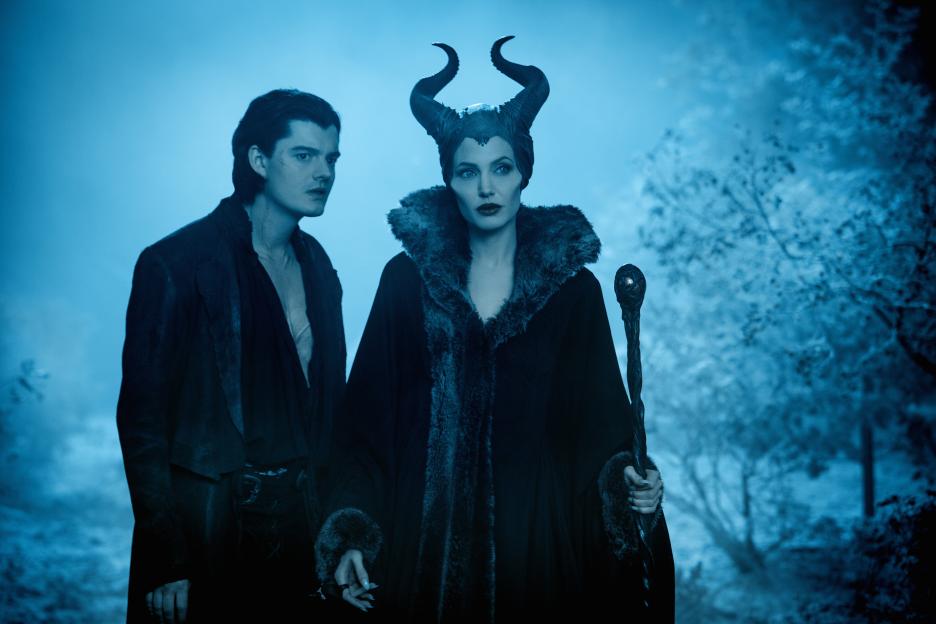 Related: A Look at the Maleficent toy line

Sam was funny. Like… really funny. The group laughed the entire time he spoke about the raven. There are certain people that know how to tell a story and how to engage you. This guy knew how to do both. I’m not sure that it’s translating, but while we were sitting around him, I felt like we were listening to a friend telling us war stories about his day on set. It wasn’t to a group of press. It was to friends. I can’t explain it. Very comfortable and engaging.

Then we talked about hair and makeup and I am so upset that I didn’t get my question in. In the movie, Sam’s body looks like it has burn marks or scars or something along the chest. I couldn’t figure out WHY that would be? I wanted to ask him why they would add that to his character but didn’t get a chance. But I did learn a few things about the process.

It took about three and half, four hour. But I couldn’t really complain because there were other people that had been in there since three o’clock in the morning, so it was manageable. These people would have to wake them up that early so that they’re ready to work at nine, you know? The ladies and guys that were putting all this stuff on, they probably work the hardest because they have to be there at that time and then the whole day they have to make sure things aren’t falling off.

But I’m a really good sleeper. I used to be anyway. I’ve just had a baby, but — well, my wife. {Everyone said awwww} Thank you very much. After a couple of week,s I managed to be able to lie down in the chair and while people were, like, gluing things to my face I could actually sleep through it which is pretty impressive. Until one morning they turned the seat back up and realized they stuck my nose on the wrong way, it was sticking up. So they wouldn’t let me do it anymore after that. 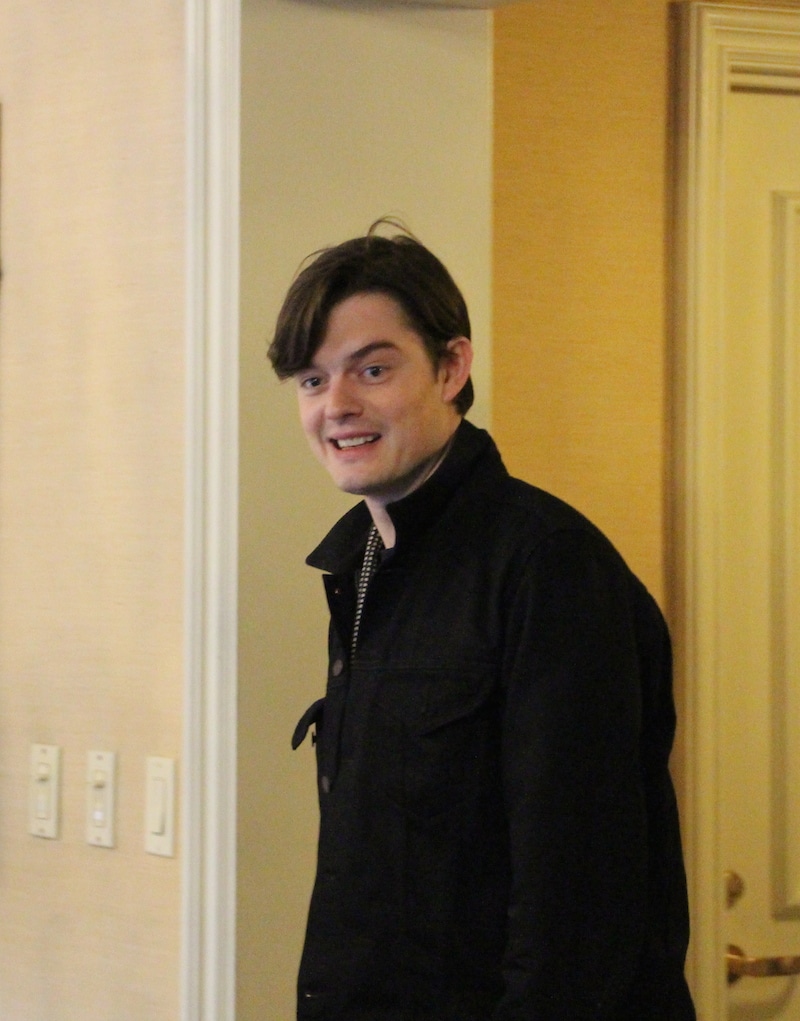 What was Sam Riley’s most memorable scene?

The first one really because I was really nervous. I met Angelina before, obviously, we rehearsed and things like that, but I’d never seen her in the full costume. And they drive you from your little trailer whatever on a golf buggy which was pretty — they don’t usually do that on indy films anyway. They had this amazing set there and she was already stood there so I was worried that I’d been keeping her waiting or something which wasn’t a good start…and she had her back to me and when she turned around it was like… It was weird. It looked, you know it’s not real, you know, the cheekbones and everything and the contact lenses. But when you look at her in all that stuff it kind of looks natural. Natural is maybe not the right word but it fits, you know? You don’t think it looks fake or something.

I completely understand this! I told you in one of my previous interviews that I also felt confused while watching Angelina Jolie as Maleficent. I kept questioning whether or not everything was real or fake because it looked perfect.

It’s always fun to hear about the audition process. How did Sam Riley get the job?

It was pretty classic. They sent me the scenes and then I flew to London and met Rob and the casting director. And then you do the scene and the lady plays Angelina or whatever. I didn’t hear anything for quite a long time so I just thought…

My agent who is really nice said, “Yeah, but you’re not really Disney material, are you?” So I was like… But he’s got a great sense of humor. Um, yeah. I sacked him. Then about three weeks later my American agent rang, which is always at night in Europe, and he said, “What are you doing?”

I said, “I’m in a pub.” And he said, “Well, buy yourself another drink because Angelina saw the tape and you’re Birdman.” So exciting.

Congratulations were in order for Sam Riley’s new baby. How were the parents doing with getting him on a sleep schedule?? We all know how FUN that stage is. LOL!!!

But we’re really lucky. He is actually sleeping. It was like a holiday the first night. Although you wake up like four times the first night that he did sleep sort of wondering what’s wrong, you know? 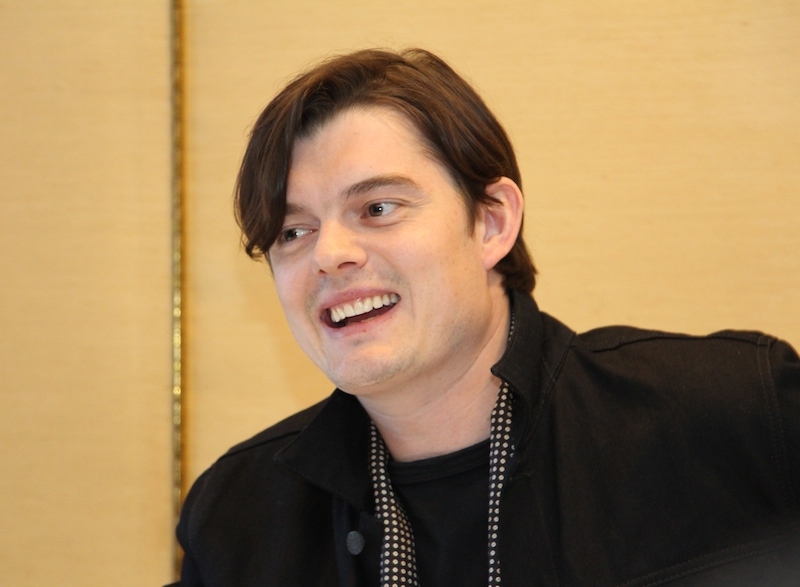 The bird to human transition is a bit bumpy. How did they land on that?

They had the special effects people there on those days to try and explain what to do. You know, when she clicks her fingers  do I go down or am I going up into the air or something like that? And the first time it was a bit strange ’cause they sort of went, “Well just go something like that.” And sometimes you feel really stupid doing these things. But it was good fun.

It’s no secret that Birdman plays Maleficent’s conscience throughout the movie. Was that intimidating?

In the beginning, he’s more like a servant and he’s scared of her because she’s all-powerful and everything. But they spend every day together for sixteen years. She’s isolated herself somewhere, so I’m the only one who talks to her. So we wanted them to be a bit more like a bickering married couple by the end of it and have these lighter moments.

I can sense that there’s good in her, which she doesn’t want to admit. When I read the script and realized that I was going to have every, every single scene with her I was like, “Oh, well, this is pretty cool.”

Did Sam Riley see any of his transformations? There are quite a few.

No, but the director showed me a variety of beautiful drawings of all the animals that I turn into so I had some idea what it would look like. And I think there’s one brief bit of transformation in one of the trailers, but like for a split second. And all my friends are like, “Yeah, that could be anybody, man, you know?” Come on. So. No, really, I’m really excited.

Maleficent is in theatres RIGHT NOW!

* Disney invited me to LA to interview the cast of Maleficent. All expenses were paid.