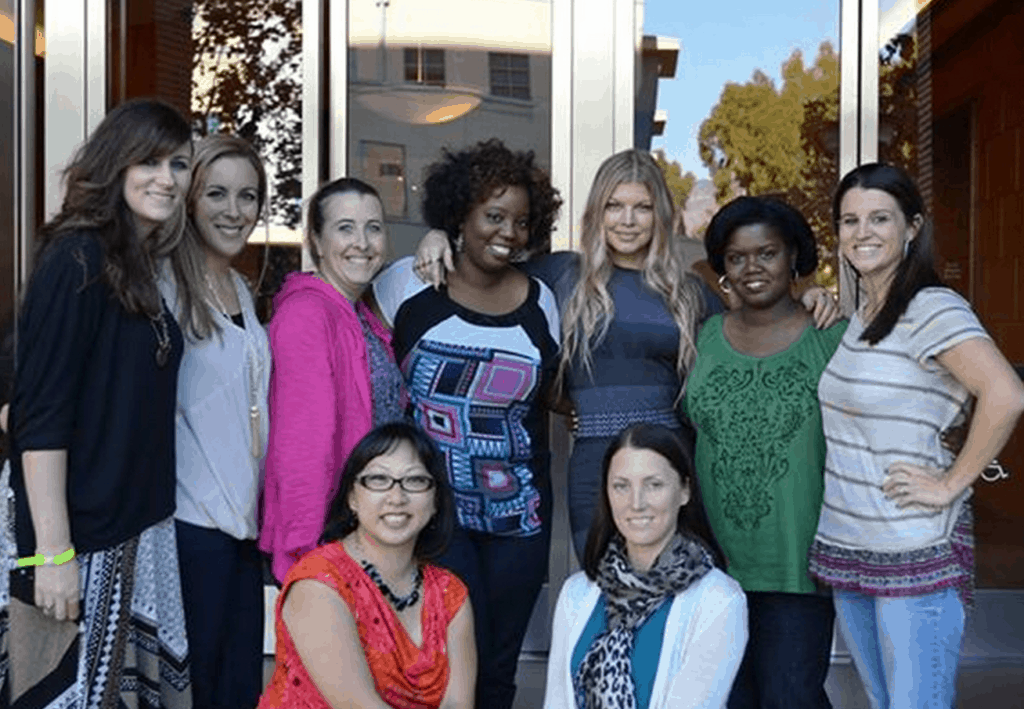 It’s Fergie. You know… FERGIE. The one and only. I’ve been listening to her music since I can remember and have always considered her a powerful force in the music industry and beyond. When she became a mother, I was curious to see what would happen to her sound, and I was happy to see that she stayed true to who she was – fierce!

She was actually a last minute addition to our LA trip. Almost like the cherry on top. It started off with a “maybe”, then it was a “looks possible”, which turned into a “it’s happening people!!!” WOO HOO.

I know I should have opened up the questions with something about the AMAs. Did you know that Fergie will be performing this year? It was just announced. She’s going to debut her first single since 2006 – L.A. LOVE (la la) from her upcoming album. I mean – that SHOULD HAVE BEEN MY QUESTION. Like… What are you going to wear? Any surprises on the stage that you have planned? How does it feel to be performing your first single since 2006?

But my head was a little cloudy. I don’t know what I was thinking? I look at her as someone who has it all figured out. She has her hand in everything. And I just wanted to know how keeps her head straight and what she finds most interesting. I mean, she loves fashion (like me) , and obviously she loves music. How can one person be filled with so much passion? How can she handle it all? Where does it all fall? That’s what I asked.

I do love anything to do with entertaining. Doing Film 9 as well. Fashion definitely. I read WWD every day. I get the paper edition. That’s my little private moment – just for me time. I’m a true believer that you have just a little bit of that – that’s just for you – every single day. It’s not that long in the morning, but it extends into my inspiration for the rest of the day – whether it be having a design meeting about my shoe line or planning my next video or performing. It’s a really fun thing for me as well.

How did you balance it all?

That is a constant challenge for me. That’s why I didn’t have my baby right away while I was putting music out. I wanted to make sure I had my structure as far as being a mom. I was very blessed to have the time to be home with my baby. I didn’t have babies around growing up. My husband did – he had little sisters. It was really just figure it out and letting natural instincts kick in along with my iCal. It was also about adding workouts back in my day… that was another thing to get motivated again. It really is a true balance. You can have it all just not all at once. Something has to give at one point.

Tell us a little bit about LA LOVE

Getting back into music and getting back into the studio… all of the LA artists and the music coming out was really inspiring because I am that LA girl. I felt like I must be a part of that. So, I got in the studio with DJ Mustard and he started playing the track and I really vibed off of the one that he played. I started free-styling and with the hook I was looking for something light. I didn’t want to come off too hard. So, la la la la la. It started to feel very international to me.  I started to think, “Ok, this is definitely about the pride and love I feel for LA, but now it’s starting to be a universal moment. I’ve traveled for the last 10 years and I’ve performed for many countries and people. This is a love letter to the world. A call out — What’s up Brazil! What’s up Germany?! You know! 🙂

Just for fun, Fergie also told us that her son LOVES Kids Camp on YouTube and she believes in some way that they influenced her music video design because she watches them so much. LOL!

Check out Fergie’s new video here. Get it guuurrrrllllll.

ONE MORE THING BEFORE THIS POST ENDS — want to know how Fergie stays on top of it all. Her performances, her play dates, her workouts, her me time, her hubby time? iCal. It’s her L-I-F-E. She couldn’t reiterate it enough. Her life is literally scheduled down to a T. It’s important to have her hours LOCKED down and that was she can maximize her time spent with her loved ones. Smart move. No idle time for this one. 🙂