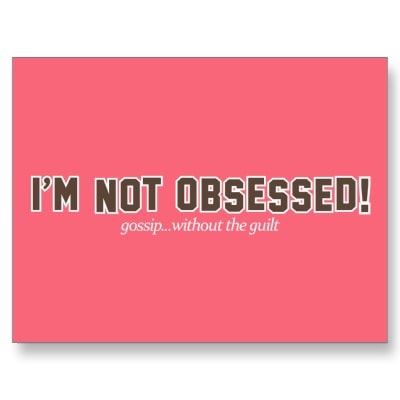 This year, I said goodbye to something that I created over a decade ago and I still can’t believe it’s really gone. Lady and the Blog wasn’t my first website. In fact, it wasn’t even my first genre. I dove into this online world through an entirely new channel – the celebrity gossip channel.

In 2005, when my daughter was just three months old, I decided to start I’m Not Obsessed. Having a background in front end design, it was fairly easy for me to build a website (especially back then when the looks were simple and when HTML was king). I didn’t have to worry about Flash or jazz or moving slideshows. It was just a blog and it was as simple as can be. This site became my outlet during a time when I was truly struggling with staying home. I was so used to working 10+ hour days, working on deadline, being on task. I’m Type A to the fullest. And I found myself wanting a little bit more as I sat home watching my three month old sleep. I just couldn’t relax. INO was the exact outlet I needed to fill that need.

And I worked on it like it was my JOB. Oh wait… it was my job. After a year or so, I had the traffic reaching anywhere between 5-7 million impression a month. After two years, Bill quit his job. We started to fully live off of the income we saw coming in from ADS. We did no sponsored content on that site. It was 100% traffic generated. I loved every second of it.

Then I had my second child and things got a bit harder. So, I hired some amazing girls and we tackled the content together. We still maintained the traffic, but I began to feel a bit manic // pulled // crazed. I couldn’t be all the things I needed to be. I started not being able to leave my house in fear that something would break while I was gone. It started to take over my life.

And then mommy blogging craze hit the world around 2009 and I wanted in on that too. After all, I was a mom and I blogged. Why wouldn’t I try to jump in that game as well? So, that’s when Lady and the Blog was born. I began to write more personal content – things I actually cared about. My passions were ignited. I saw how enjoyable it could be to own a site. It wasn’t making me crazy. It was making me happy. I started to feel conflicted. Money vs. happiness???

At this point, I had two very successful sites going at the same time. I had two kids dying to be with their mother. I had a husband that was somewhere in the room too. And it was just me. How could I possibly do it all? One year, on my daughter’s birthday, my server was hacked and my company could not figure out how to fix it. She was begging to go out to dinner and have some birthday cake and celebrate her big day. But I couldn’t leave the site down. I just couldn’t. She started to cry. It wasn’t enough to make me go. And that was the moment I LITERALLY had a nervous breakdown. Like – “shaking in the corner, almost throwing up, Bill practically sitting on top of me trying to calm me down” nervous breakdown. I saw myself for the first time. Someone who was completely controlled by the madness. I saw that my entire life revolved around this impossible schedule. I saw that even the tears of my daughter weren’t enough to draw me away from the site. I still needed to correct it. And that was not what I wanted to win as a mother. That was not the right decision. I MENTALLY understood that but I couldn’t make any other decision. I literally couldn’t pull myself away from the server until it was fixed. And I hated myself for it.

We never did go out for her birthday. It was a terrible night. I ended up going to bed with a lot of sleeping aids in my system. Bill stayed up until 3AM to fix what needed to be fixed. I completely shut down. My brain just stopped. I couldn’t think. It was like I just shut off.

That night was the last night I ever wrote for I’m Not Obsessed. Bill took over my log in. He hired two extra writers as soon as he found them and I never visited the site again. It completely broke me because I saw that it had complete control over me. I couldn’t celebrate my daughter’s birthday because it was broken. I will never EVER forget that day.

Over the years, it floated on. The writers did the best they could do as more and more sites made their way onto the net. Eventually, every magazine under the sun opened up their own blog. It was hard to compete with that. Our numbers started to fall. Meanwhile, I put 100% of my concentration on Lady and the Blog and this site grew and grew.

Every now and then I would ask about INO to see how she was doing, but in the end, I was ready to let her go a long time ago. She broke me after all.

This week, we finally said goodbye to her. INO was still making a profit but I didn’t feel like it justified the time and effort that Bill was putting into it for that figure. I truly believe that if he put that energy towards his own site – Guy and the Blog – he will find a much happier mindset just like I did many years ago.

I am sad to see this site shut off. But I am also happy, relieved, upset, thrilled, and every other feeling in the book. It was bitter – sweet and that’s the truth. I had to build that site… because it brought me to my true passion. HERE. Everything happens for a reason. My children don’t remember that day – Natalie’s birthday. But I will never EVER forget it. It was a huge lesson for me.

Time is more important. Family is more important. Money isn’t everything. And as long as you have hustle – you can make anything work for you. Lady and the Blog now earns more than I’m Not Obsessed ever did. In fact, I almost doubled my earnings this year compared to the highest year on record from my time heading that URL. So, sometimes change is good. Sometimes change is needed. Change makes you stronger and forces you to be a better version of yourself… because you HAVE to be.

Thank you for the good and the bad INO. I will never forget you.