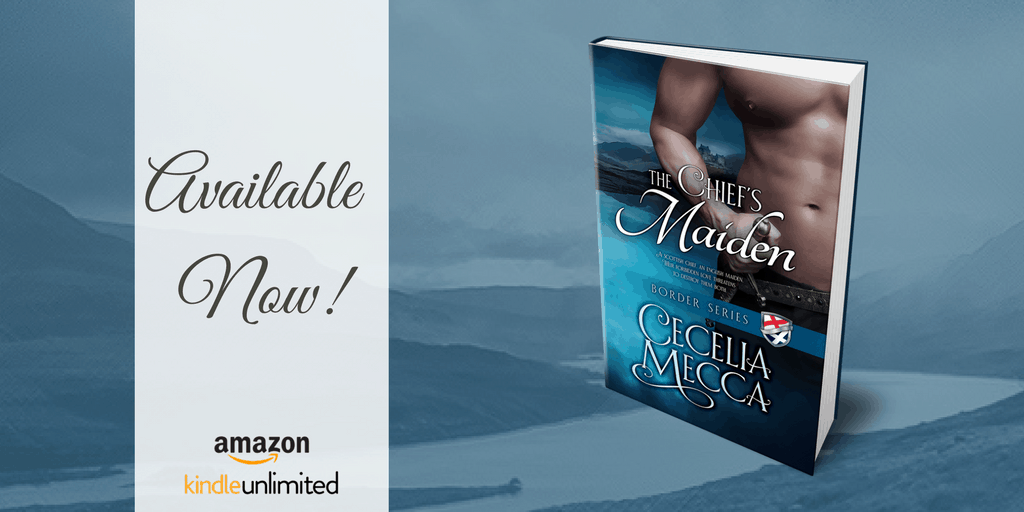 The third book in Cecelia Mecca’s Border Series, a medieval romance set in 13th-century Northumbria along the Anglo-Scottish border has FINALLY RELEASED – TODAY –  September 14!  It’s now available on Amazon and in Kindle Unlimited. Each of the previous Border Series books hit #1 in their categories including medieval and historical romance on Amazon, and The Chief’s Maiden is already receiving similar praise ahead of the launch on Goodreads:

“Let me tell you, this book rocked!”

“This is part of a series but easily read as a stand alone. You will meet others from the previous books that will tempt you to read them.”

“I so love to read a story with a strong female lead and Cecelia does not disappoint again.”

“The tournament action scenes are so well written you can almost feel you are a part of the audience. “

I’m so excited to announce that I have one copy to give away to one of my lucky readers. This is so much fun for me to do because Cecelia – the author – is a good friend of mine.

A Scottish chief. An English maiden. Their forbidden love threatens to destroy them both.

The Scottish king gives Toren Kerr a dangerous but important mission—kill the English Warden. The man’s rumored corruption threatens to destroy the fragile peace along the border, and Toren reluctantly agrees to do his duty. When he travels to England to participate in the Tournament of the North as a cover for his mission, the last thing he expects is to find love, but he’s immediately drawn to a beautiful, mysterious Englishwoman. . . only to discover she’s the warden’s daughter.

Books are Lady Juliette Hallington’s escape from her sheltered life. Tales of romance are her favorite, and they’ve convinced her there’s only one reason to marry: love. When her protective father agrees to send her to the tournament with no guardian other than her married best friend, she recognizes her chance to avoid an arranged marriage. But after meeting Toren, Juliette begins to realize real life is more complicated than tales of love—and the very thing she wants most might consume everything she holds dear.

I got a sneak copy of The Chief’s Maiden and let me tell you… it is NOT disappointing! So very excited about this historical romance. My favorite genre to read.

The Chief’s Maiden is available on Amazon for a special launch price ($2.99) during launch week and is free for Kindle Unlimited readers. Readers can also get behind-the-scenes bonuses by becoming CM Insiders.