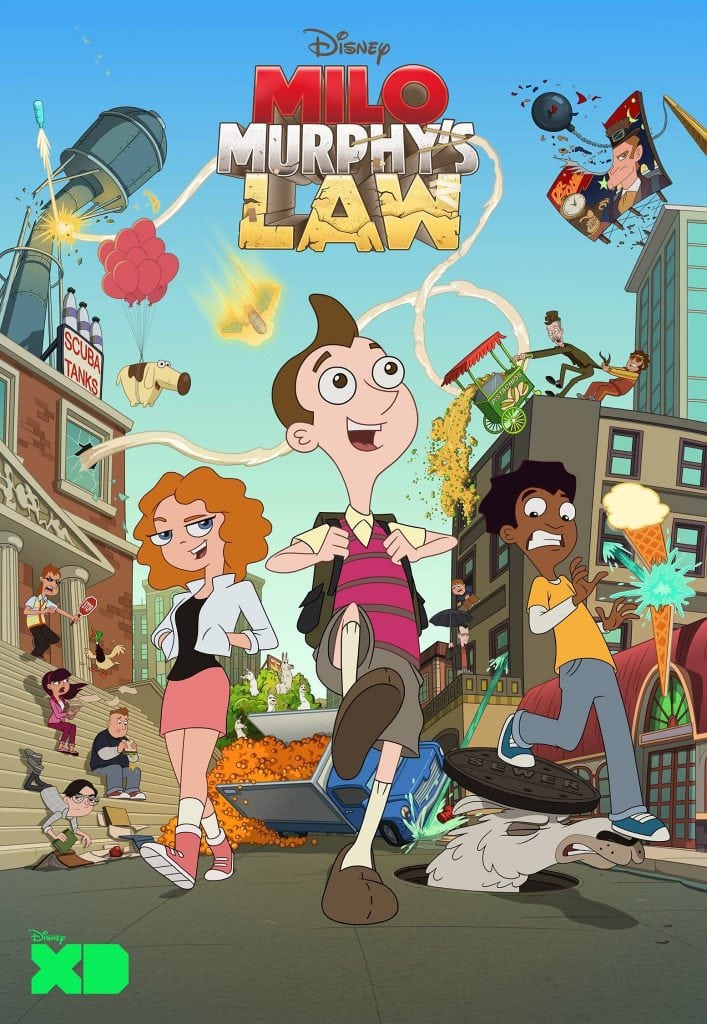 While in LA, I had the chance to sit down with Disney XD’s “Milo Murphy’s Law” creators Dan Povenmire and Jeff “Swampy” Marsh. If their names sound familiar to you, they SHOULD. These two men are also responsible for the HIT animated TV show – Phineas and Ferb. It was actually really fun to hear them speak together because I’ve been a fan of Phineas and Ferb for many years. As you know, they lend their voices to some of the characters they create. SO, if I closed my eyes and listened, I could visualize their alter egos. Too cool!

But this chat was all about Milo and I was happy it was. My family was in the market for a new family cartoon to fall in love with. Milo is someone you instantly start to root for. His constant upbeat attitude goes against everything my jaded, NYC born-and-bred-body has ever known. But there’s a real innocence to it all! Or is there? Maybe Milo is the keeper of some hidden life knowledge – that everything will work out in the end and our reason for being is actually just about enjoying the ride… not getting to your destination. 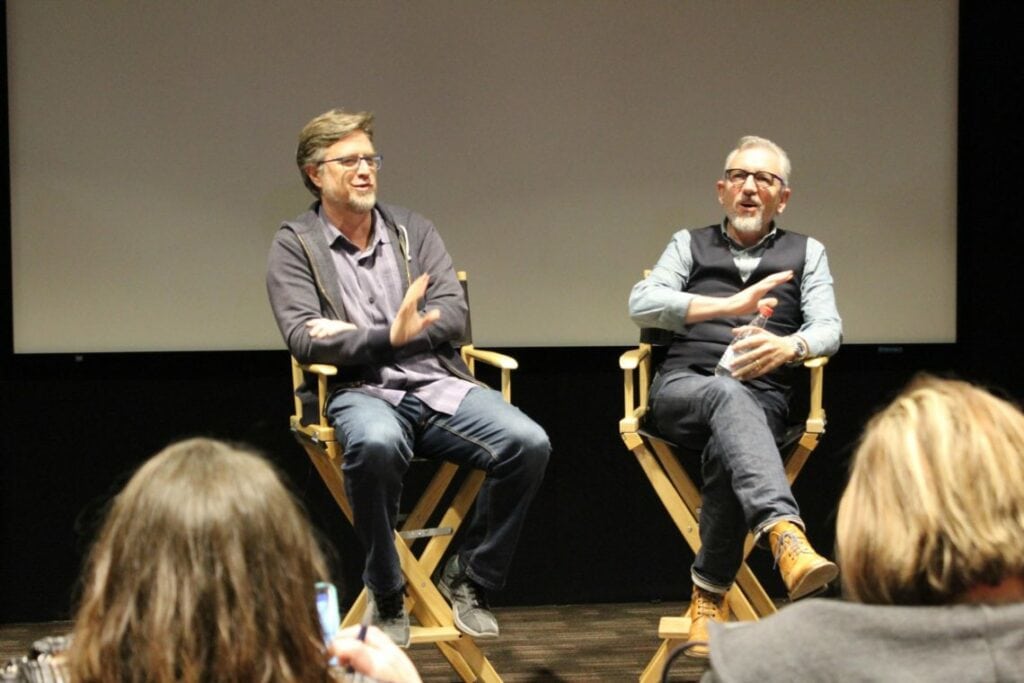 Weird Al Yankovic actually voices the character, Milo and we wanted to know how much of an influence he had on his storyline.  One of the biggest concerns for Dan and Jeff when casting Milo was to find someone with a “very positive voice without sounding put on.” That’s hard to do if you think about it!

Dan: We auditioned hundreds of people for Milo. We auditioned kids.  Seasoned voice actors.  You know, people who — whose work we love.  But when they try to do that super-positivity thing, it’d always come off sort of Pollyanna and false.  And we were just like, we just need to find somebody who just actually has that voice, ’cause the character is sort of modeled after a friend of ours who just sounds that way when he talks.  And, you know, he just always sounds really positive.

And we needed to find somebody who sounds — you know.  Who has that positivity just naturally.  And Weird Al came in and did a voice on Gravity Falls.  And Alex, who runs Gravity Falls, posted it, and I was like — oh.  Weird Al.  I’ve met him.  I’ve seen him interviewed.  He’s this super, super positive guy.  What does he sound like?  I had to look up an interview with him to remind myself what his voice sounded like. We had him come in, and it was just — just immediately worked.

Jeff:  I was against it.  We already auditioned literally hundreds of people. So, when Dan said “we’re going to read one more person,” I’m “fine, whatever, I don’t care.” And then he sent me the audition and I got up in the morning, and it was in an e-mail.  I‘m literally sitting there in bed with my wife, and I play Weird Al’s voice.  She goes, “Who’s that?  ” I went, “It’s Weird Al.  It’s really good.”

Dan: It was a great find, and working with him is great.  The fact that we get to write songs and have Weird Al sing them, it just makes my high school self just, Weeee! 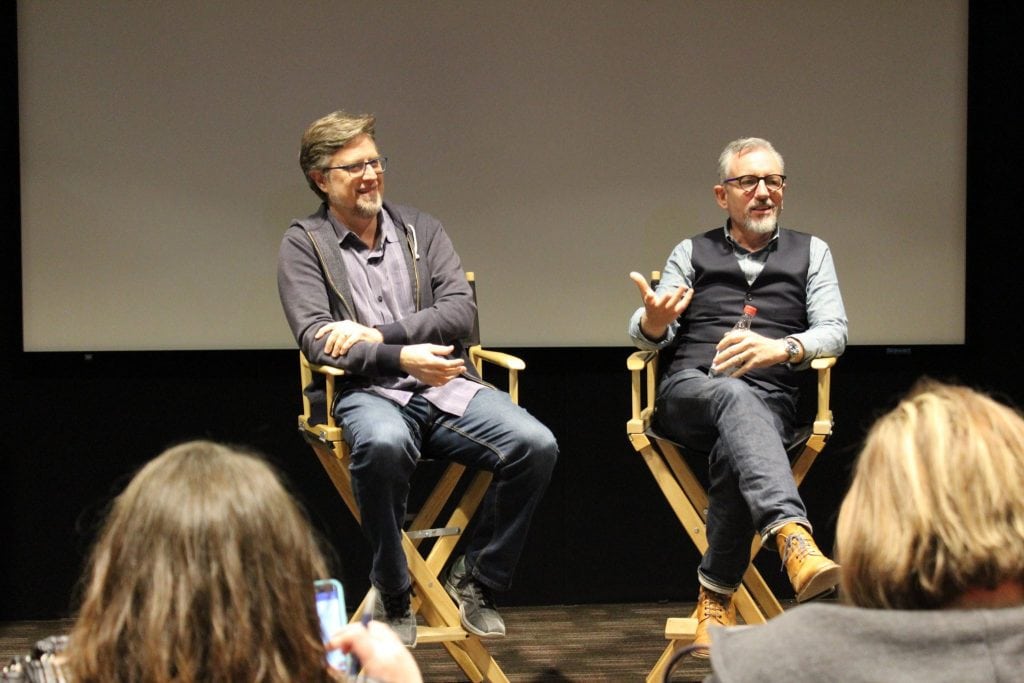 Al is also a bit of a showstopper for other guests that come on the show. Most people that come on to read lines for characters ask if they can meet Weird Al – it’s every 80s kid’s dream!

Jeff : The other fun thing about Al, of all of the really big names that we have had come in and do voices on this show, those people geek out more about Al than anyone I know. Really famous people.  Had somebody look down and go, “Al is coming — can I stay?” I’m like, “Yeah, of course.”

Can I take a selfie? 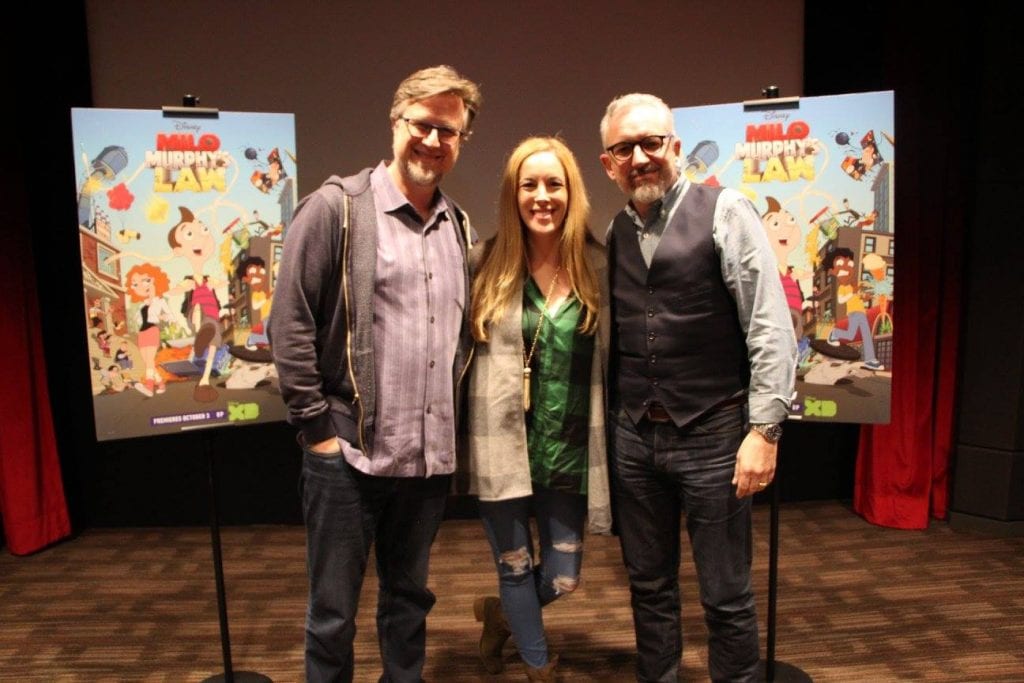 I always love to get a peek behind the curtain and I learned about a little thing called the “Monday Morning Gag.” Basically, Dan and Jeff sit down and try to figure out what key phrases the kids will be tweeting about at the start of the week. What moments will get picked up as the hype?

Jeff: It’s nice to know that things that you wanted — were hoping that would connect… actually do connect! Also I think I look to find the surprising things I didn’t expect.

Dan: You guys laughed at something that we weren’t expecting you to laugh at, and I can’t remember what it was, but I was like, “Oh, I guess that is funny.”   I hadn’t thought of it that way at all, but it was! That’s always fun – when you get a laugh for something that you’re like, “Oh, that’s a surprise.“ 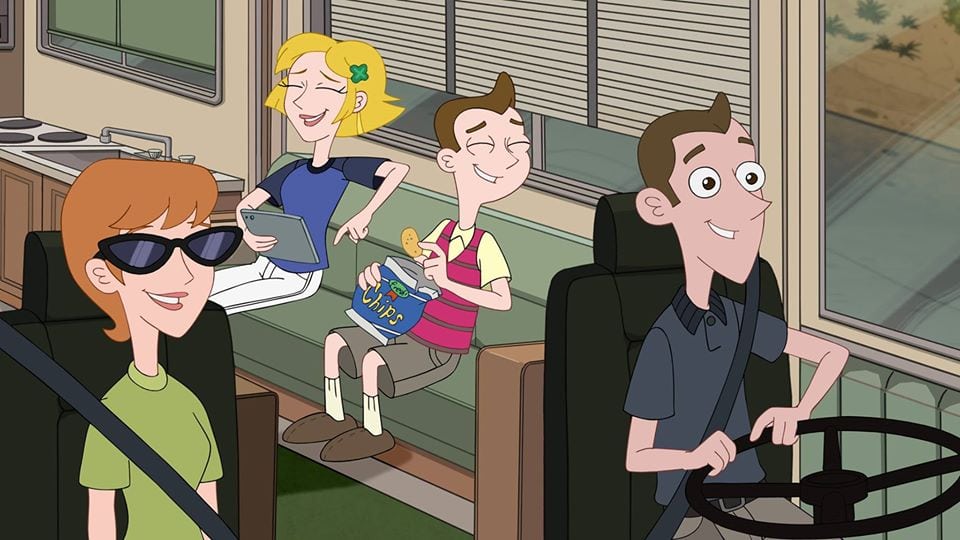 As I mentioned above, both Dan and Jeff voice characters in Milo Murphy’s Law. We all wanted to know if that was predetermined or not.

Dan: I think the writers were like, “We need somebody to cut away to,” because they were used to doing Phineas and Ferb, and then cutting away to Perry and Doofenshmirtz.  And they pitched this idea of these time travelers, and then the whole like, what they do and everything came out of that meeting.  But when I drew it, I sort of was drawing it with the thought of me being that guy, and you being Cavendish.

That’s just been a fun thing to do.  And we get to be in the record room together, which we never did.  He was Monogram, and I was Doofenshmirtz, and there were only like, three episodes where they even had a conversation because they were usually separated by distance.

One of the most important things this duo wanted to accomplish was to create a show the whole family will enjoy.

Dan: When we started Phineas, it was right at the time where TV watching had gotten so segmented.  There’s cable stations that are just, you know…there’s the Food Station, the Food Network, and Home and Garden Television. The research was showing that every age group in the house had its own TV.

Family viewing as we remembered it, from when we were kids, had sort of disappeared. When we were kids, it was the whole family on the couch watching TV.  It was everybody watching one show, and you had to pick something that everybody liked, and since that was no longer the norm, people weren’t watching shows with the whole family.  So, when we hear that families watch this show together, it just warms our hearts. We’re bringing back family viewing to the family.

Disney invited me to interview the creators of Milo Murphy’s Law. Travel and accomodations were covered.