I really enjoyed interviewing Wrinkle in Time costume designer Paco Delgado earlier this month. He had such a passion for his craft and it was pretty clear that he brought his worth to the table while working on this movie. 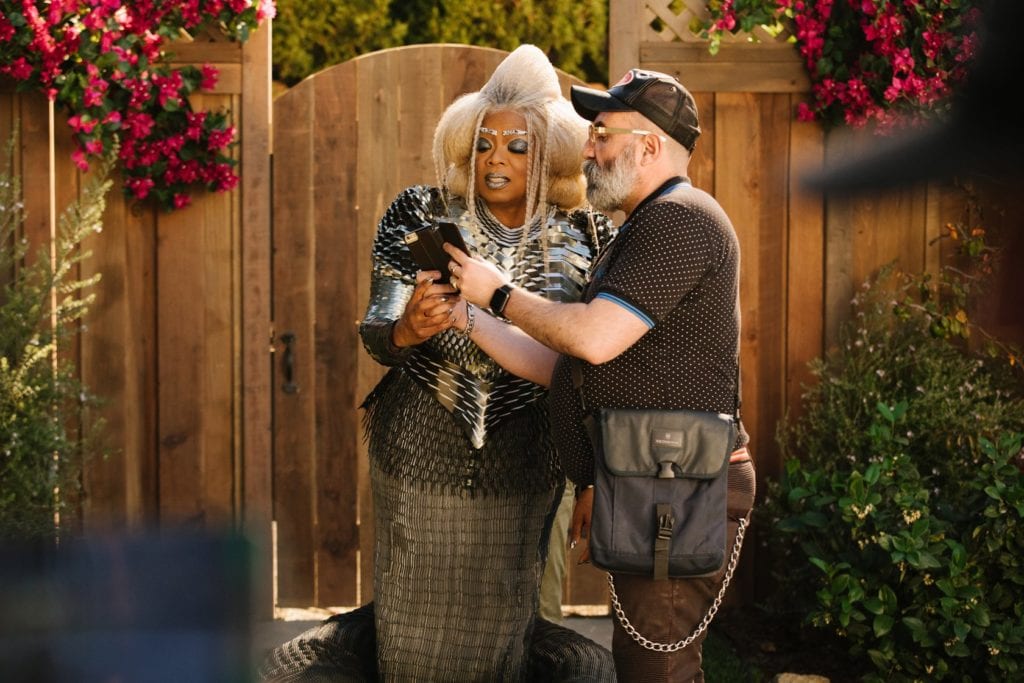 The costumes truly were characters on their own. Each dress/look had so much to say about every one of the Mrs. and I think that says a lot about the power behind Paco Delgado mind’s eye. His gift is storytelling and his medium is fabric.

We asked Paco Delgado a few questions about the process behind the Wrinkle in Time art conception and he opened up about what he loves best.

The very first thing we wanted to know revolved around the beginning. Where does Paco Delgado usually start when coming up with design concepts for a movie?

The first thing I always do is to read the script. You get some hints. For example, Oprah’s character was Mrs… Mrs. Witch. She was a warrior that was fighting in the universe against the forces of evil. Originally, she was a supernova that exploded and became all this energy. We knew then and there that Oprah’s character had to be energy. 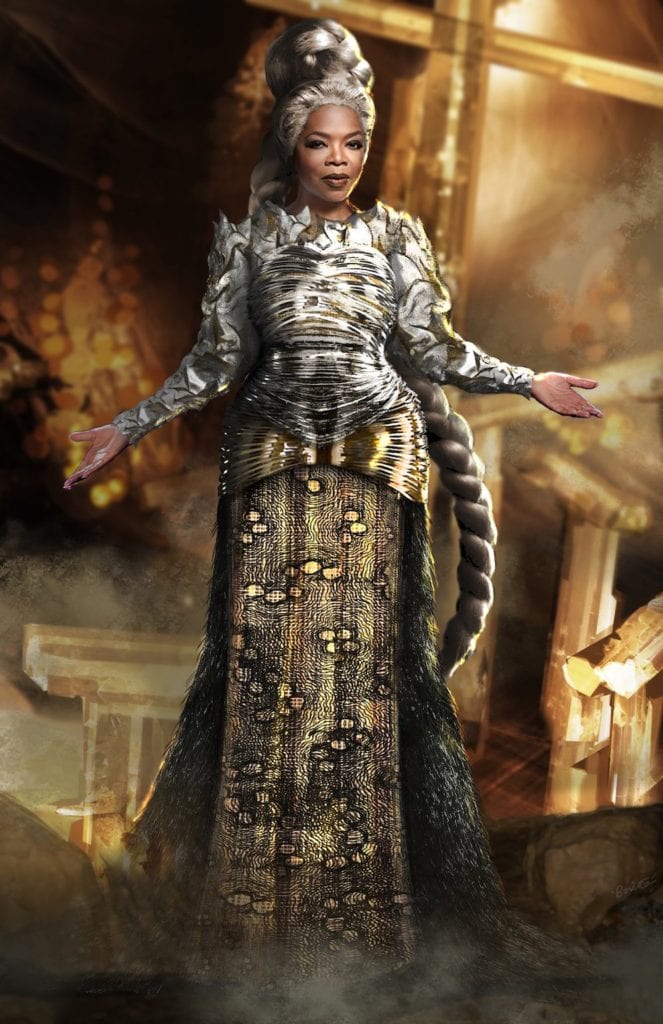 But it doesn’t always work out the way he wants. Not all ideas flow as well as they do on paper. For example, Paco Delgado told us about a time where a sketched idea did not come together as planned.

We started looking for fiber optic. We found this company in China that did amazing fiber optic and we imported some options from them. Then they came here and didn’t work. We were trying different things and making a lot of mistakes.

For example, Oprah’s dress that has the light took ages to make. Weeks and weeks and weeks!  We never found the right amount of electricity. It would work in a really dark room which would over-excite us. “Oh my God, this is amazing!” And the thing is, we went to show it to Eva in a normal room like this, it just did not work!

How embarrassing! It happens. 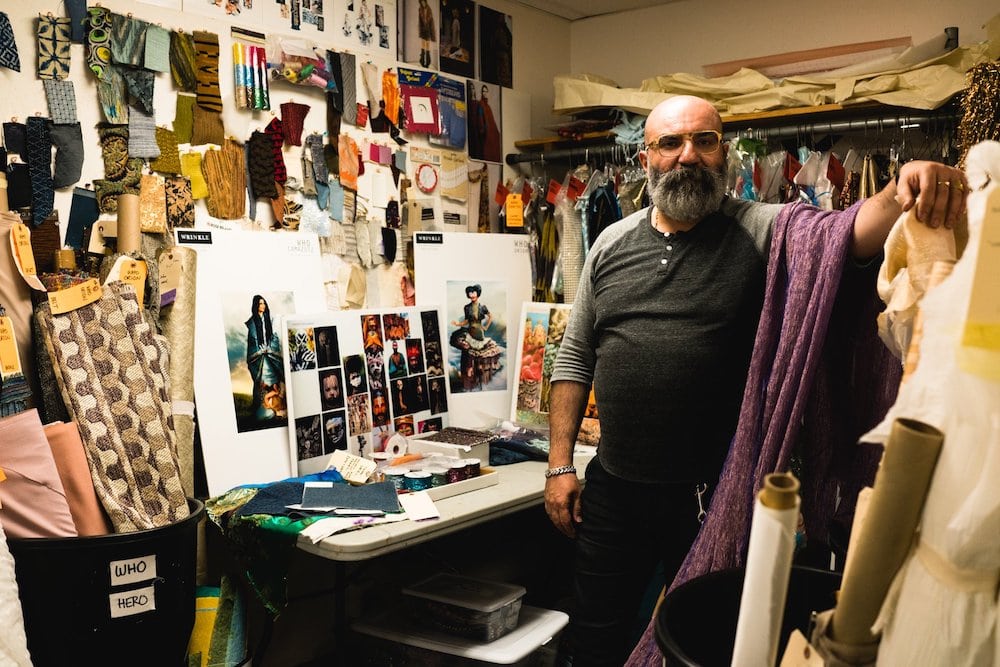 One of my favorite costumes as a viewer was Mindy’s librarian look. I just loved how she literally had on pages from books which in a way defined her. The group asked Paco Delgado to elaborate about that process as well.

Mindy was this super librarian. So, I thought that all her dresses had to have layers of things like book pages. I wanted to see if it was possible to make something with paper. It was an ordeal to find the right paper. But we found these people in south LA that have this warehouse where they sell Japanese paper –  made by hand.

In the beginning, we bought it in it’s raw stage. Then we tried to have our people who dyed materials try to see if they could dye it different colors. It dissolved. Then we found another vendor. And then it worked. That piece took at least three or four weeks. Nothing in this movie took less than four weeks.

Some of the dresses took eight weeks. But also you have to think about what we were doing. Everything was worth doing and it was all being done simultaneously.

8 weeks for a single design! Now, think about all the costume changes that occurred in the movie. Think about all the backups that had to be made for every costume. Times that by how many actresses where on the big screen. You know I am not good at fast math, people. This is my weakness! Oy! 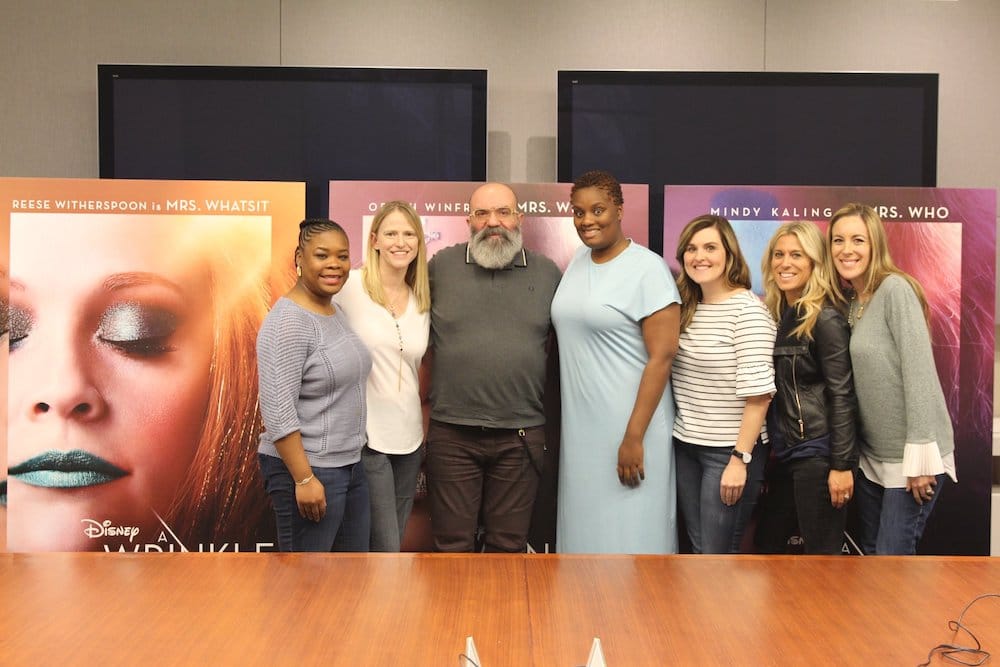 The last point I want to highlight revolves around the actors themselves. Does Paco Delgado start designing before he knows who the actors officially are? I thought this was an interesting answer!

It’s not only the body shapes, the tone of skin,  the tones of the hair, the color of the eyes, or the way they move that helps define a wardrobe.  Because some people have gracious physicality while others walk through life almost stumbling. For example, you cannot put a person in high stilettos if they don’t know how to walk in them. I always try to wait until I get the answer.

I normally try to start work with very open ideas. For example,  I think this man is a strong man that is very clever. And this lady, she is very powerful and she knows how to deal with all the problems in life. I try to work that way. Once we learn about the actor, everything becomes an open book. I mean, you suddenly see the picture.

That makes complete sense and I truly visualized what he meant when he said some actors are particularly graceful while others just aren’t. I thought of Nicole Kidman and then I thought about someone else who I am just not going to name.

These two women walk differently naturally. So the same dress would fall and flow in totally opposite ways. Of course, you need to know the name behind the mask. After all, doesn’t the actor bring life to the words? It only makes sense that they would bring life to a costume as well.

Be sure to head to the theatre this week to see Wrinkle in Time! If you’d like to read my review, check it out here.