I had a crazy day. If I told you everything I did, you wouldn’t believe me. As you can see, content has been a bit light this week. That’s because I am prepping for something HUGE this weekend that just fell on my lap very last minute. A gig is a gig is a gig and I can’t say no even if the timing is a tad inconvenient. I’m going to have a TON of FUN, but a lot of PREP had to happen for it to take place. That’s all I can say right now. Let’s leave it there.

And then I’m leaving for Vegas on Monday! I mean – we can’t forget about that! UGH

Anyway, I just sat down and got to sorting through my emails. I came across the new trailer for Rogue One: A Star Wars Story and I immediately turned it on because I’ve been so curious to see it. 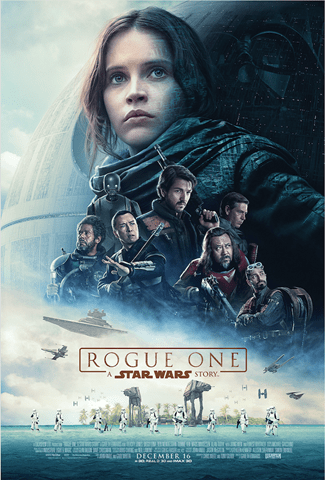 Have you seen the poster yet? Amazing!! Look at that lead! Look at her – front and center. With all the little men below. I don’t mean to sound that way but…. YEAHHHHH. That’s how I’m sounding. As someone who is HARDCORE into SCI-FI and Superheroes and all that jazz, it’s NICE to see a leading lady NOT HALF NAKED ON A POSTER. You and I both know that’s the only way they get this much airtime. The heroine who is hot will earn 75% of a poster… but where are the leading ladies who are smart and intelligent and brave and … clothed? Where are the women I can show my children?

When I saw this poster, I got excited all over again – just like I did the last time I sat down to watch Star Wars.

Official Synopsis: From Lucasfilm comes the first of the Star Wars standalone films, ROGUE ONE: A STAR WARS STORY, an all-new epic adventure. In a time of conflict, a group of unlikely heroes band together on a mission to steal the plans to the Death Star, the Empire’s ultimate weapon of destruction. This key event in the Star Wars timeline brings together ordinary people who choose to do extraordinary things, and in doing so, become part of something greater than themselves.

ROGUE ONE: A STAR WARS STORY arrives in theaters everywhere on December 16th! Will you be there?

Iam just so thrilled to see a movie franchise that I saw for the first time in 1977 still going strong. this is my childhood on the screen.