Visited The Set Of Guardians Of The Galaxy 2 Set And Holding Baby Groot! #GotGVol2

A few months ago, I dropped the bomb that I visited the Guardians of the Galaxy 2 set on my site and it was everything! It was a secret visit and I had to stay quiet forEVER. Do you know how hard that was for me? Harder than childbirth! That’s how hard! I have to say, I’ve done plenty of things in my blogging career, but this was one of the coolest ones. Not only am I absolutely obsessed with Chris Pratt, but my interview with Zoe Saldana has literally changed my life in a real and substantial way. More on those in a bit. For now, I want to talk a little bit about what it felt like to go behind the scenes of Guardians of the Galaxy 2.

During our tour, we had time to check out some costumes, learn about the props, see Baby Groot before anyone else did (WHAT?!)  and test out just how heavy all the artillery really was. Hint: not as heavy as you think. 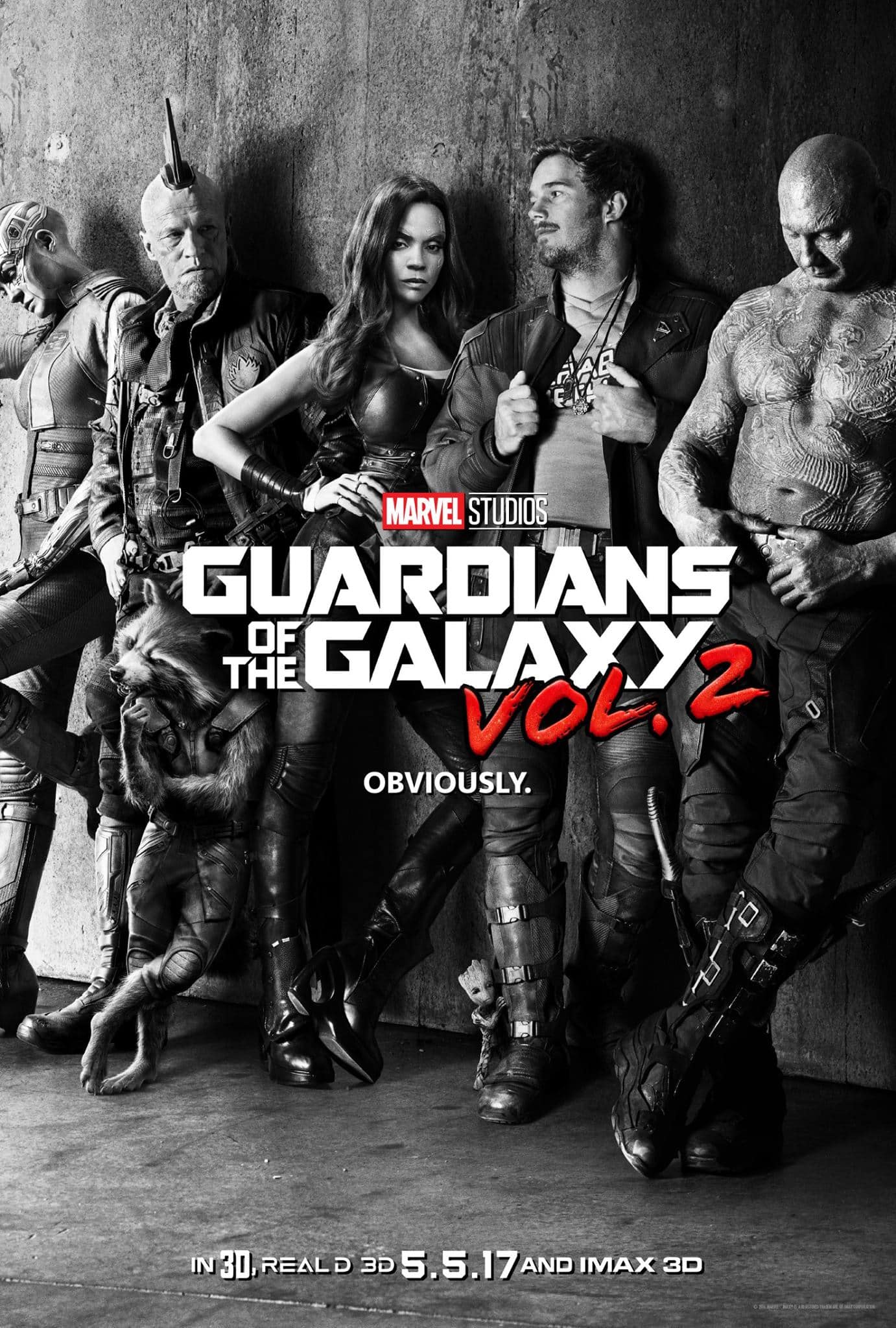 One of the most interesting things that happened during my set tour (besides actually seeing a scene film LIVE) was getting a chance to interview Russell Bobbitt – Property Master for Guardians of the Galaxy 2. Now, this man is a legend in the Marvel Universe. In fact, if you look his name up online, you’ll see that he has his hands in quite a few superhero titles under the company’s umbrella. Do you like Thor’s hammer? Him. How about Captain America’s shield? Yup – you guessed it. Also him. What about Iron Man? He couldn’t have possibly worked on Iron Man’s suit TOO, right? I mean, that is just too much awesome on one resume! Well… he freaking did.

So, it’s no surprise that he would be on the set of GOTG to work on all the weapons and ammo that was needed to make all those fight scenes look real. 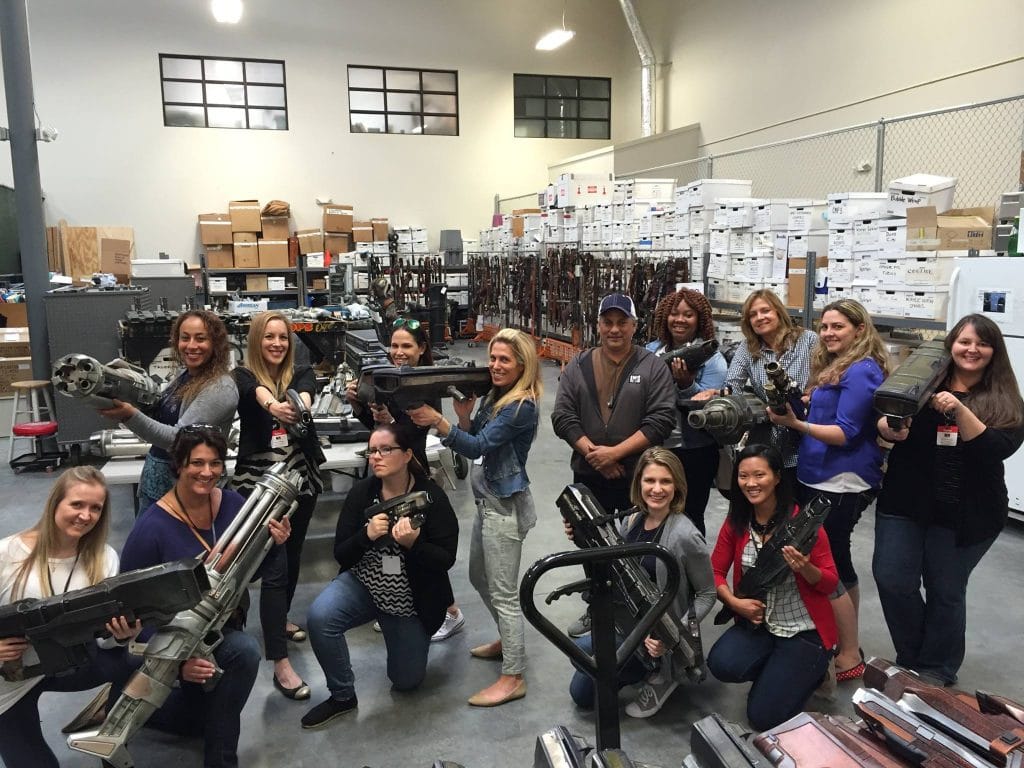 How does he work his magic? That was the first question we asked Russell!

Marvel gives me a script and I have to figure out what kind of props the actors need and where they fit in the universe. And so I’ll go over the script and, and sort of make a big list of everything I think should be in the movie and then I think outside the box and do the background stuff. For example,  the background alien person walks by – what’s he gonna have in his hand?  We design, manufacture and engineer everything basically from scratch on a movie like this because we’re in outer space and there is no outer space prop rental house or an outer space store that I can go to and say I’d like, you know, 800 outer space weapons. 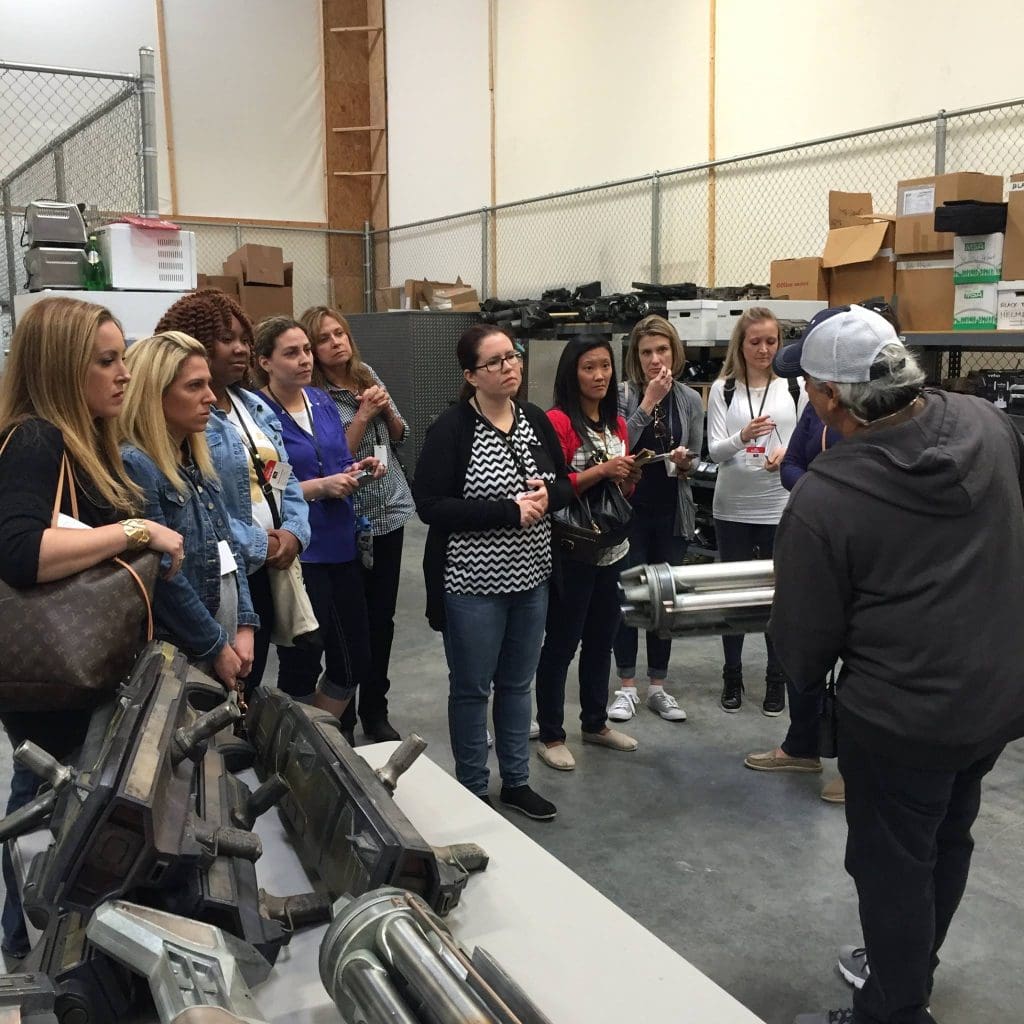 We draw the specs and I show the director. I get approval. Then, I get with the actors and I figure out what their characters are gonna be — and we come up with a plan. From there, it’s a manufacturer process. Drax, Dave Bautista, is a tremendous guy. So if I have to give him a weapon, it’s gotta be a really big weapon.

Now, here’s something I never thought about – two versions of the same weapon. One for closeups and one for running around and holding for long periods of time. But they look exactly the same on camera. Brilliant! 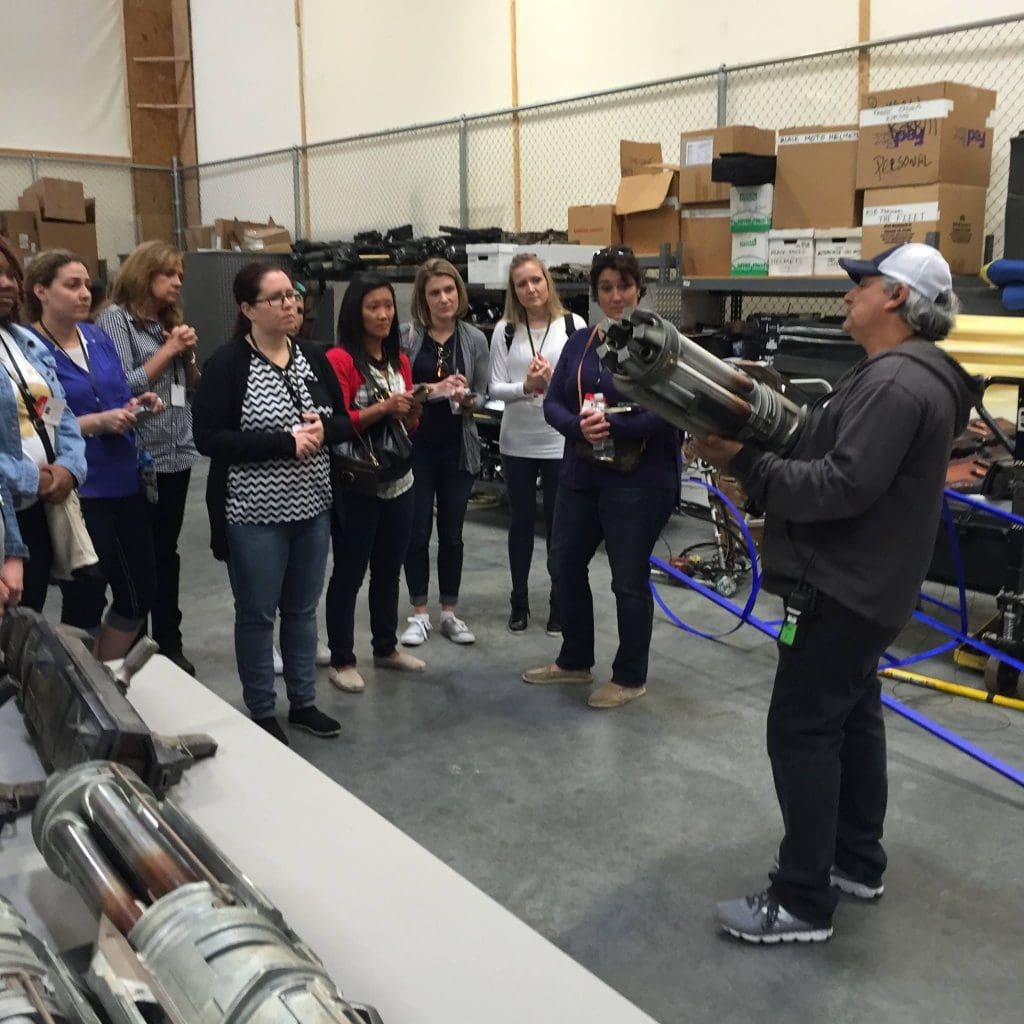 This is one of Drax’s weapons.  I’m gonna pass it around. It is virtually impossible to hold for 12 hours a day while we shoot. This is a real one and it — what — the real ones allow me to do is shoot real good close-ups of em. You can see that this is a metal pipe. And there’s no other material in the world — no paint that can emulate that. So I have to make one that’s this heavy.

What I’ll do is I’ll make a lightweight rubber version of it and we do the best we can to make it look great. These are rubber pipes and stuff. And we use a paint that’s called Alsa paint that is the closest thing to metal that you’ll ever find on the market, in the manufacturing world, a thousand dollars a gallon. 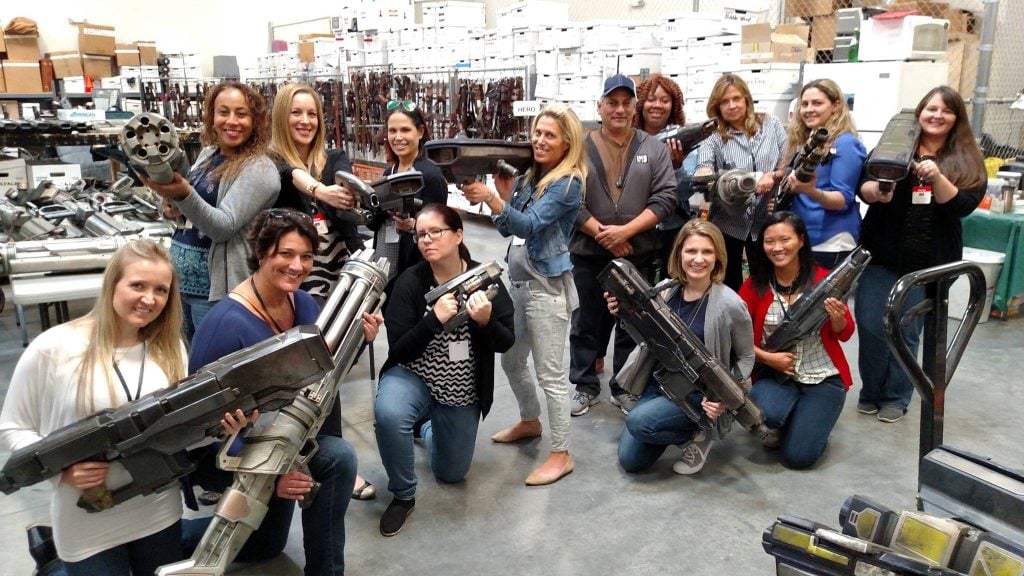 So, we were shown two weapons that were pretty much spitting images of one another – one made of metal and one made of mostly rubber. Genius. On film, you won’t be able to pick out which was which. I can guarantee it!

My favorite story was about Christ Pratt’s headphones. Oh, Lord have mercy look at this gif. Just give me a second before I have to move forward with my thought. I just want to be in this space for a few seconds longer. He is looking at me through the screen. That smirk. That smile. That little shimmy / shake.

The headphone!! Right! Lots of issues getting doubles and triples for those walkman headphones! The warehouse that had samples BURNED DOWN and Marvel couldn’t get anymore!!! Listen to how much they ended up paying to get replicas.

The Walkman that Chris wears, was insanely challenging in that there’s plenty of the Walkman’s out there. You can find those. But the headset – allegedly Sony had a fire in the warehouse and all of that model burned to the ground.

I looked at my boys and the people that shop for me and I said, okay just go find them. Go online, go to Ebay, do what you do to find those headsets and we found two pair. Eight thousand dollars each because they were in Guardians of the Galaxy 1. And nothing irks me more than having to pay eight thousand dollars for something that we created in the first place that was a 12-dollar purchase.

I thought they were joking when they came to me and talked about eight thousand dollars and they showed me. I looked at the Ebay ones. I stared at them. I studied them. I looked at photos from the first movie. I discovered that they weren’t even the actual headsets used in the film. They were just that model and they’re so hard to find that they’re able to sell em for eight thousand dollars, even if it’s the same model.

I called my manufacturing people. I put together a plan and I manufactured my own. Probably cost me more than eight but not much more than eight. And, and so we had a manufacturer more of his headsets because we wanted them to be the same headset.

I’ve run into those challenges and we overcome them and, and it’s fascinating. It’s like the director is so excited — James Gunn is thrilled to death about that headset because he created it. And so he’s really proud of it. 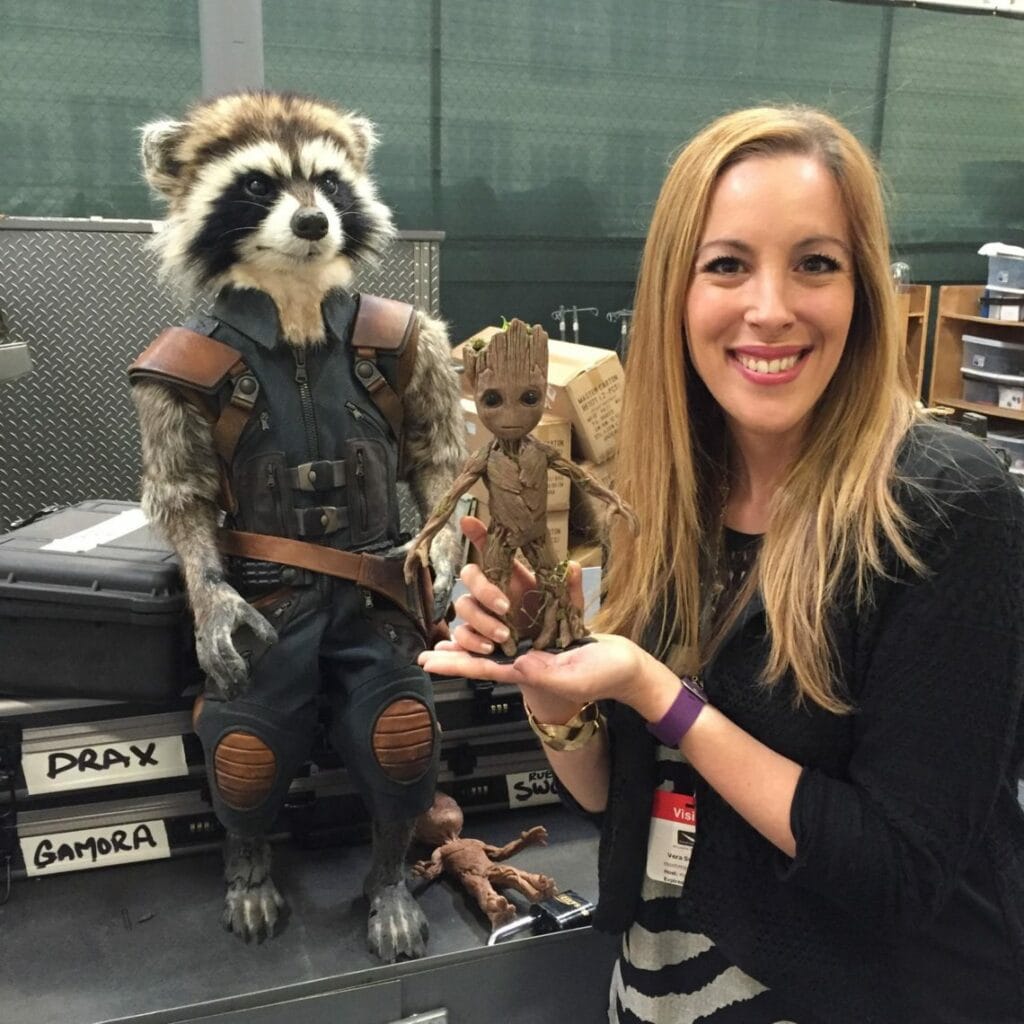 And then, we got to hang out with Baby Groot!! We got to learn a little bit about him while we snuggled behind the scenes.

It’s an aluminum armature inside of there and you bend him enough and that aluminum breaks. So in the middle of filming, Baby Groot broke a hip.

This is a reference piece but we made the reference piece exactly how he’s gonna be in the movie. And so Baby Groot broke a hip. James Gunn stopped shooting, completely concerned about Baby Groot’s hip and I had to send him to the Baby Groot hospital. He had a, a hip surgery. This a true. I’m just telling it from the eyes of a person that cares. So we cut him open, we put new armatures in him, uh, and the next time he had to make an appearance on set, I saw James, he was sitting in his director’s chair and I saw him look over at Baby Groot to make sure he was okay. And I, I carried him over and I let James have him and he touched him and moved him and he, and he was so happy that Baby Groot was all better. Pretty amazing.

Oh, and just in case you were wondering about the budget for props for Guardians of the Galaxy 2 — it was…… one point three million.

Stay tuned because I have so many more interviews to post this week including Chris Pratt, James Gunn, Zoe Salander and more.

Oh yeah, did you see this new spot that aired during yesterday’s Big Game??? I just can’t wait to see this in the theater with my kids!!! * Disney / Marvel invited me to attend a press event for Guardians of the Galaxy 2 and covered my flights and accommodations. All opinions are my own.
Living
Share