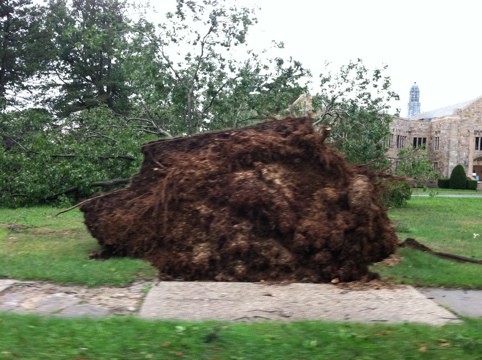 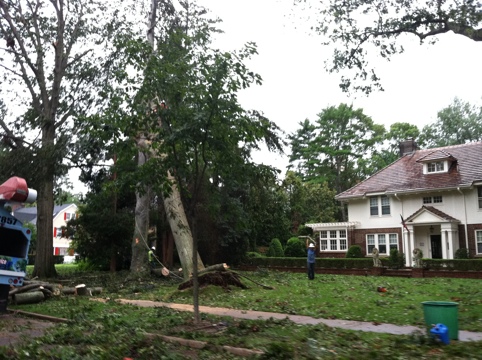 I just drove around my town to see what sort of damage happened due to Hurricane Irene. We were LUCKY – let’s just say that. My town is FILLED with old oak trees and SO MANY OF THEM WERE UPROOTED.

My local paper is investigating whether or not a tornado touched down a few times because most of the damage is very isolated. There were two specific regions that were HIT HARD – one (pictures above) was three blocks from my house – and I’m not exaggerating.

The other – right next to my son’s school!

Friends told me that some houses had their roofs ripped off, but I didn’t see any of that. Then again, I only drove around for 5 minutes because the winds of Hurricane Irene are still pretty strong.

Check out the videos to see the Hurricane Irene damage on Long Island – central. I can’t imagine what the coasts are looking like right now if the center is like this.

My thoughts are with everyone who were affected by this storm.

ALSO – during the actual storm peak, I took these videos – though it doesn’t seem like much. My guess is most damaged happened during the night.

Vera I googled around trying to figure out what on earth is going on in Long Island and ran into this site. There's a media blackout on television obsessing about NJ and VT, and yet I can't get through on the phone to any family or friends in Suffolk (and parts of Nassau) for 2 days now.

I'm particularly concerned about my 88 yr old grandmother residing in george link apartments in coram. All accounts from the weather channel claimed interior long island was untouched but without a car she's homebound 99% of the time and still no answer. Same with my disabled mom living in a town called south haven on montawk hwy. I hate to be a pest but being out of state I'm seriously tempted to call the police. If anyone can fill me in a little better, I'd appreciate any information you could post.

As for the trees there are a couple of factors involved. The tallest ones are the ones that get hit the hardest because it's the nature of the storm. Wind forces don't harm shrubbery the way it does trees, and stand alone old growth trees are most vulnerable. Note that most of these oaks that fell down were nearby concrete walkways and/or paved streets. The nature of their root system requires a spread that's about equal to it's spread of it's foliage canopy. In other words when you have an 80 ft wide canopy, it's healthy root system would be about 80 ft wide. Concrete & heavily compacted earth interferes with that, compounded by the volume of rain that came down forced to drain in that patch of earth loosening the soil they did have root in. Every inch of paved over earth forces the surrounding earth to absorb twice as much water than it would ordinarily. You can see my overall meaning in pictures better... http://www.google.com/images?q=oak+tree+root+systems&ie=utf-8&oe=utf-8&aq=t&rls=org.mozilla%3Aen-US%3Aofficial&client=firefox-a&oi=image_result_group&sa=X What's specific to long island is the fact that the water tables tend to be high, soil tends to be sandy, and so roots tend to not be the deep tap root the way it would in a loamy forest terrain. LI geology and horticulture are not conducive to ideal conditions for traditional oaks even though they can grow there. This is a theoretical explanation why indigenous scrub oaks are much happier & grown maintenance free in the pine barrens. Most plant species are determined ok to grow based on frost/ zoning system but doesn't take into account the nature of the soil you're working.

Pine trees and oaks are allways the worst and fastest to come down. Glad it was not bad there at all :)

unbelievable.......we were all lucky....it could have been so much worse.......hoping the people who had damage get the help they need to go forward. God bless

Great footage Vera! Most of those trees are huge!! Glad you are safe!