Oh my goodness. I have been DYING to write this post all WEEK. Yes, the magic and wonder of ‘Beauty and the Beast’ revolves around Belle’s love story with the prince. That is hand’s down – without a question – an absolute fact. BUT, in the live-action version of the animated classic, there are additional stories that will steal your heart and bring you such joy. There are a few more couples that you will follow and root for. Each mixed up in the curse all in need of a little bit of love to cure their pain.

These sub-stories were just as special to me because they truly drew me in.

A husband and wife who openly talked about how they felt themselves becoming more and more like the animated objects they were cursed to become and holding onto each other for as long as they could still feel. Why am I crying over a candlestick and a duster?! What is happening with my life?!

I had the chance to interview Audra McDonald and Gugu Mbatha-Raw and they were such a pleasure! I absolutely LOVED watching their roles in Beauty and the Beast because – like I said – their storylines just drew me in. I love my husband. I couldn’t IMAGINE being part of this curse with him. Maybe that’s why it affected me so. To be apart like that. How dreadful! 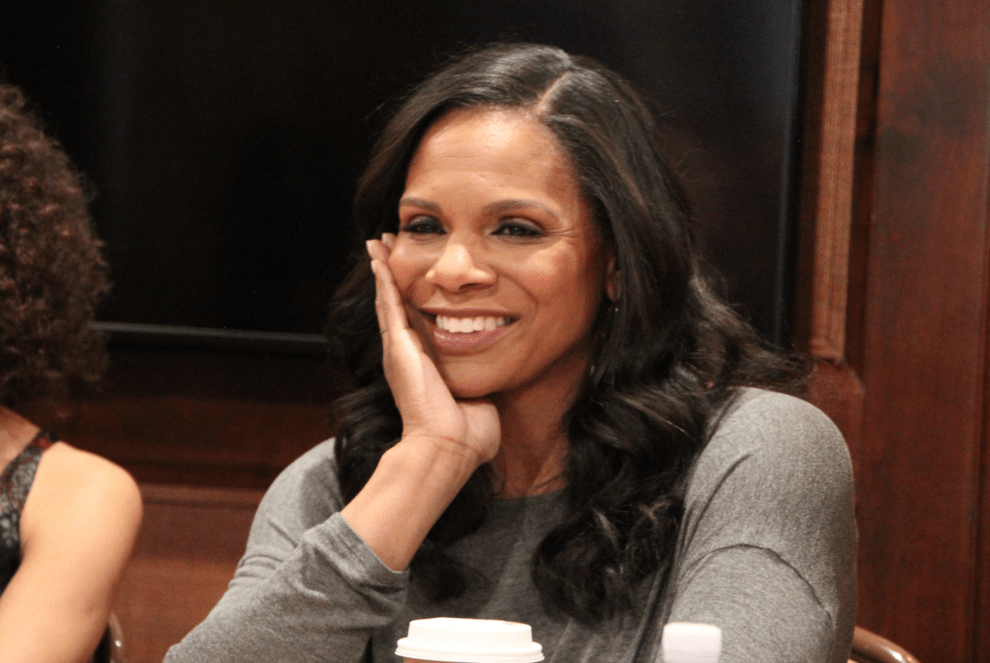 Audra: On the night before we started filming in London, we all went out to dinner and they had a dinner for the cast and everybody.  Aren’t those adorable?  And I said to, after I’d had a glass of wine I was jet-lagged, I’d flown over from New York, I was jet-lagged, had a glass of wine, I was like, ‘so, Alan.  I auditioned for the musical on Broadway for the ensemble and I didn’t get cast in the ensemble.’  And he goes, ‘I know, I know, I know.  Is this okay?’  I was like, ‘yes.’  [LAUGHS]  Thank you, this, this fixes it, thank you. 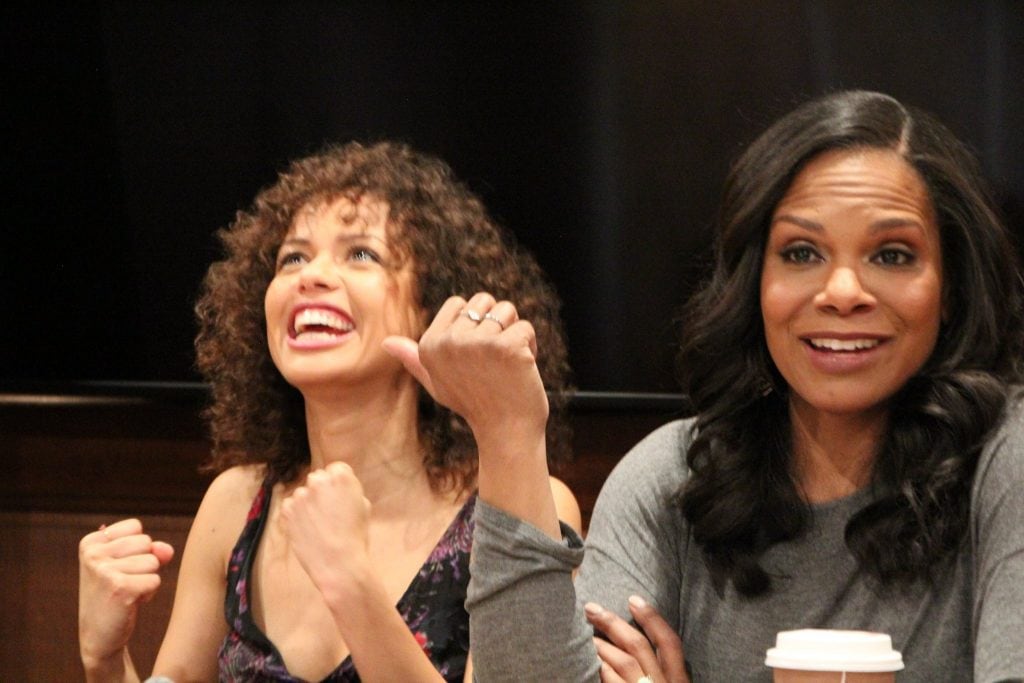 You will soon hear Audra on the big screen and when you do, you will understand the POWER of her voice. Absolute MAGIC. I couldn’t help it – my daughter loves to sing! I had to ask about her beginnings and how I can encourage my little one who has such a passion for the stage.

Audra: It has a lot of it had to do with my parents and my mom.  I, I was a really hyperactive child having, struggling, actually and my parents were struggling with trying to figure out how to, how to help me.  And I was an overdramatic child and having a hard time in school and whatnot.  And they went to the local dinner theater one night and saw a little junior troop that performed before the main musical and it was kid, a group of kids.

I loved to sing at home and all that stuff and I had all this extra energy and drama inside of me.  And they said, ‘maybe this is gonna help her.’  And so, I auditioned for that when I was nine years old and that set me on my path and so I really, I really have my parents to thank for looking for something that would be right for me to express who I was and find a way to channel that energy.  And so that’s what started me on my path. 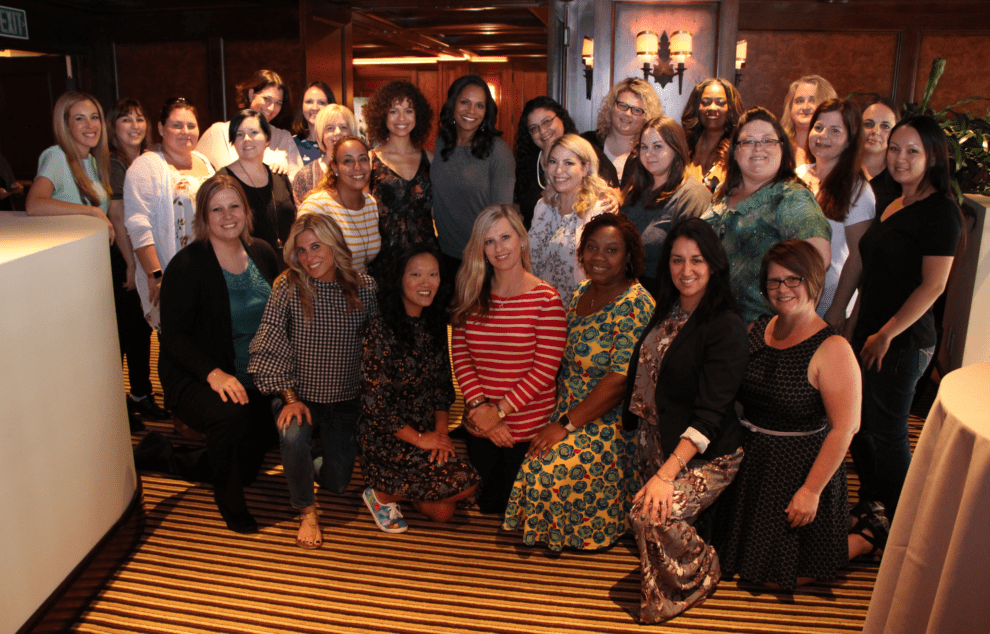 How did Audra feel about having Emma on cast?

Audra : It thrills me to no end because Emma’s such an incredible role model.  You know, and I, as I was saying in the, in the press conference, my daughter for her sixteenth birthday and her fifteenth birthday, asked for people to make donations to charities in her name.  And that’s what she asked for and that’s because of Emma Watson.  You know what I mean?  But, that’s what these kids are learning, if that’s your role model, then go, go, go you know.  So, to be a part of this film that’s gonna be a part you know, obviously a classic and part of the Disney cannon and also be in a film with someone like Emma Watson who has influenced my kids so much is very important to me and one of the reasons I said, ‘yes.’ 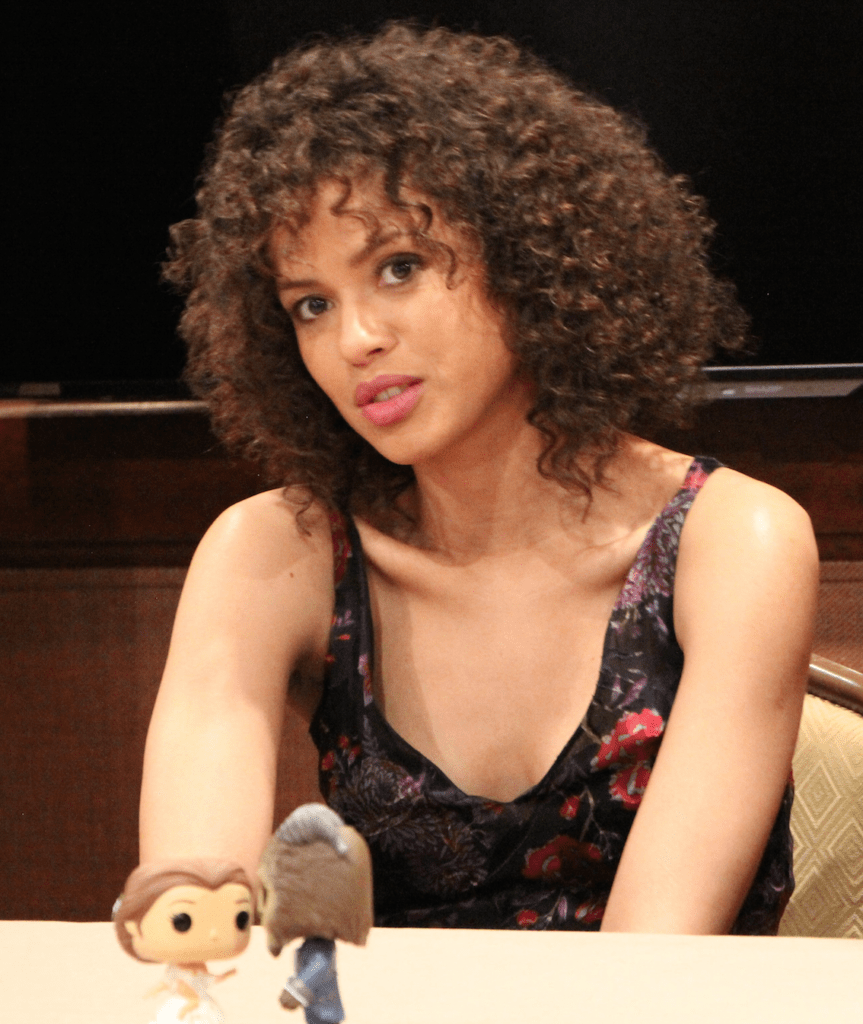 Preparing for an animated film is very different than a traditional movie. We asked Gugu what she thought about the process.

Gugu : Well, for me it was just so liberating.  I mean, I’ve never been offered a role like this before obviously you know, I had to come from doing some quite intense dramatic roles and the idea of playing a feather duster, I sort of thought was so whimsical and fun.  But, also you know, it’s a lot of vocal work in the, in the recording studio and finding the, not just the singing but finding the voice of the character, working on the French accent with the dialect coach and also just really going back to that childhood thing of like, ‘let’s pretend.’  You know, it’s, you’re not limited by your face and your body.

Even costume and makeup was obviously handled differently!

Gugu : On my first costume fitting, Jaqueline said, ‘okay, would you like to meet your object?’  [LAUGHS]  In the room, they had the feather duster on a stand and I was kind of taken aback because Flumette is quite different to the feather duster Fifi, who’s more sort of mopped like, in the original.

And I was pleasantly surprised to see that they made her into this sort of flying dove like peacock-like, very dainty creation.  So, in the costume fitting, you know, we played around with the bird theme, um, and you know I had a big tail feather on one of my costumes, a huge bustle which also worked with the period.  And feathers, I had feathers in my hear, you know, we played around with this sort of Marilyn Monroe style wig so it was kind of fun for me to blonde which is just so outrageous.

We had feathers in my hair and you know, so it was really just sort of channeling a mixture of that sort of you know, playful sort of flirty Marilyn thing with you know, feathers. 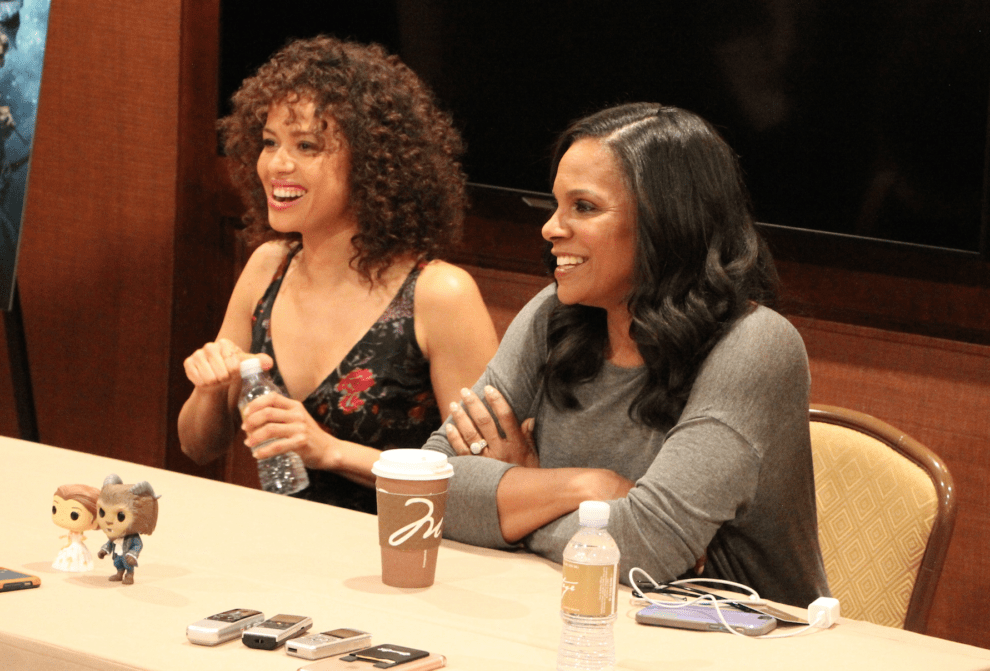 At the end of it all, these two talented and beautiful women have some hopes for the audience members.

Gugu : I hope that people will get swept up in the romance and you know, the music is just so iconic.  And you know, I love the message that beauty is found within, you know, it’s an oldie but a goodie.  But, I think you know, really for this film, you know, the idea to you know, look a little deeper, see the human within each and every person, you know, even if the exterior is not, is something that intimidates you or you’re not familiar with.  You know, there’s, there’s always a human underneath it all.  And I think to try to connect to somebody’s soul, is really important.

Audra : Also that love yeah, there’s always the love conquers all, love wins and it’s not about just giving the love but loving yourself too.  I think that’s what’s so important.  And, and, and realizing that what you have inside of you is most important and not the outside doesn’t necessarily matter.  And I’m sure that’s what people are gonna take away from this. 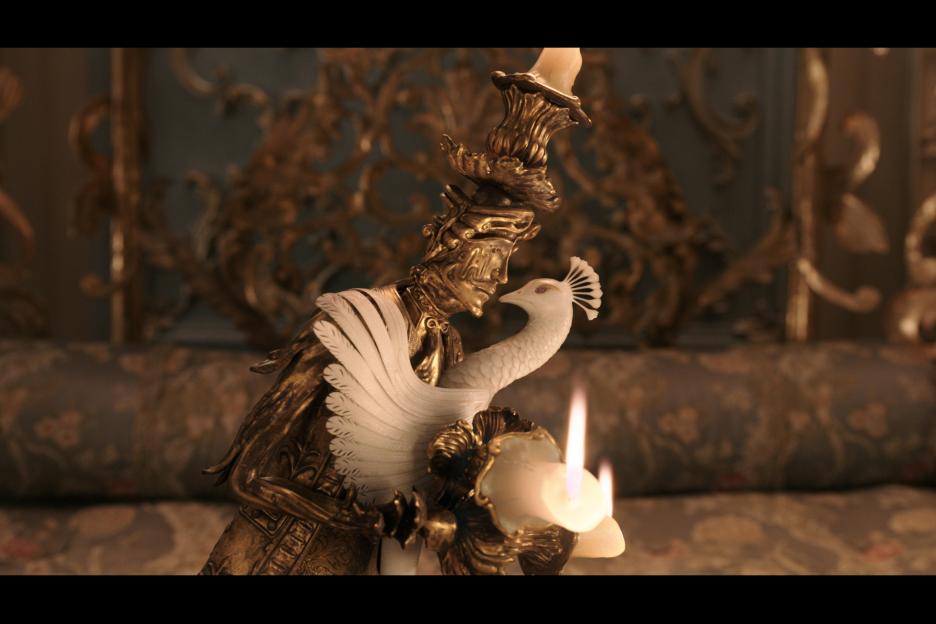 There is so much love waiting for you with Beauty and the Beast!! You won’t want to miss it! My favorite were these two though. Such PASSION. The French always know how to bring it on the big screen. 🙂
Like BEAUTY AND THE BEAST on Facebook: https://www.facebook.com/DisneyBeautyAndTheBeast 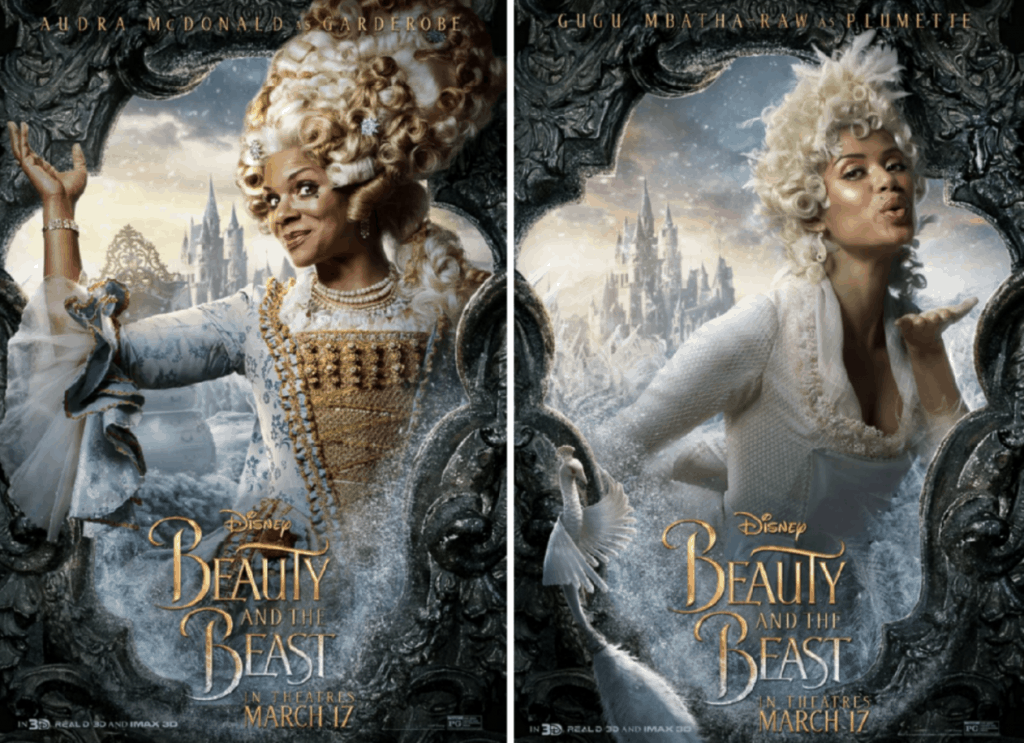 * Disney invited me to California to interview the cast. All opinons are my own. Travel was covered.

Beauty and the Beast is a beautiful movie. I love the story, music and the way they love each other. I'll go see it with my friends, may be this weekend.