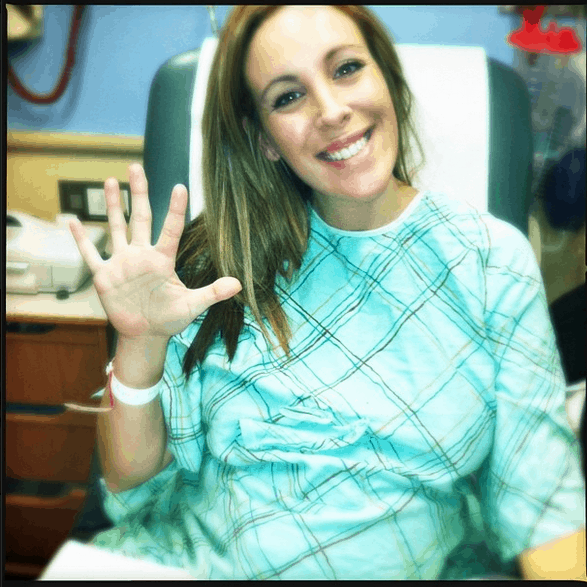 I had a few bag eggs get assigned to me at the hospital and I would be lying if I told you they didn’t taint the experience. But I’ve decided to let all of that go and not harp on the negative. These women were so BENT on believing the machines over what I was telling them – that it literally drove me crazy. But like I said – I’m letting it go. (At least for this post – I’m filing an official complaint about one of them today. What she did to Caleb was … unbelievable!)

Let’s move on because I can get crazy! Here’s my birth story – one filled with the joys this weekend brought me and my family.

Friday I was cramping HARD and contracting for about 9 hours. I knew I something was happening but I was so afraid to get sent home again. At about 10PM, we headed over just to make sure. My in-laws took the kids just in case and it was a good thing they did because I was 5 centimeters. I could grumble here a bit about the nurses who helped me (and who didn’t believe me… and who were patronizing me because I wasn’t presenting tremendous pain) but I won’t. 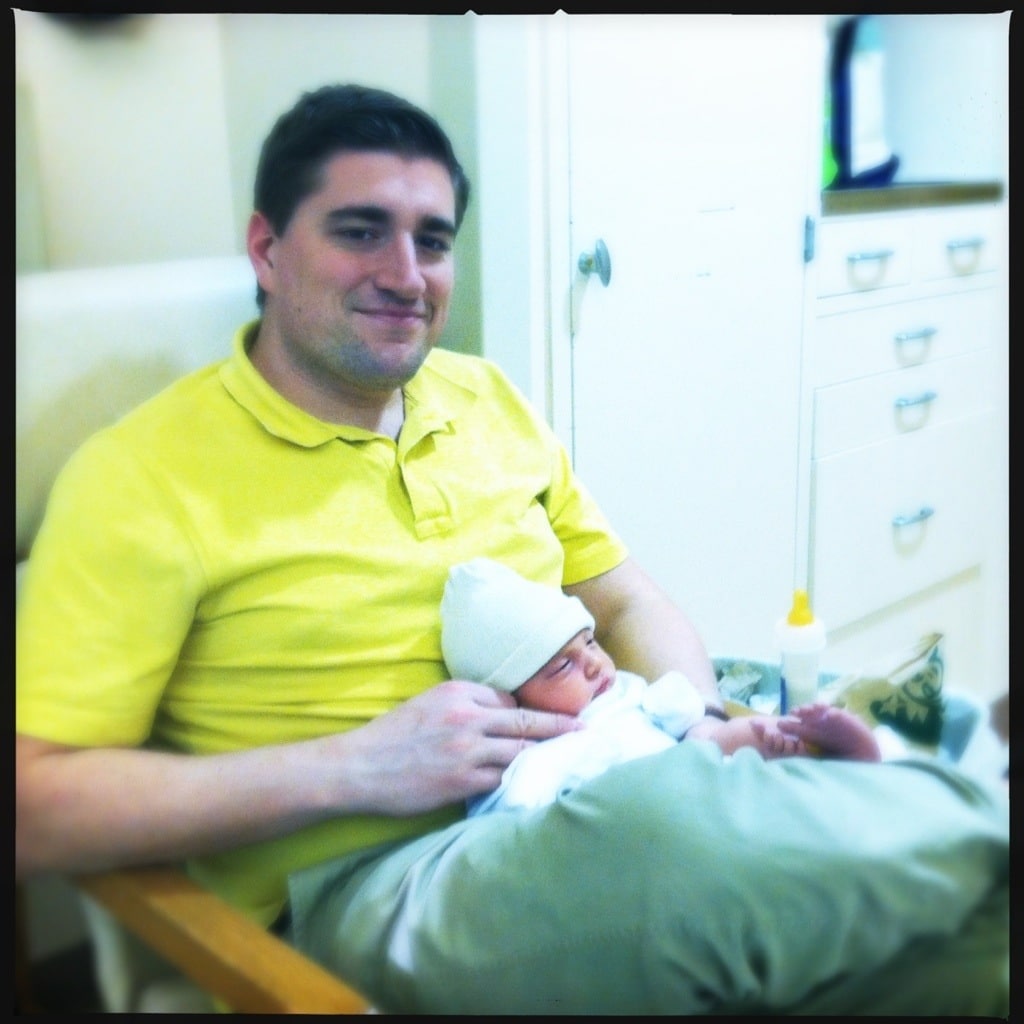 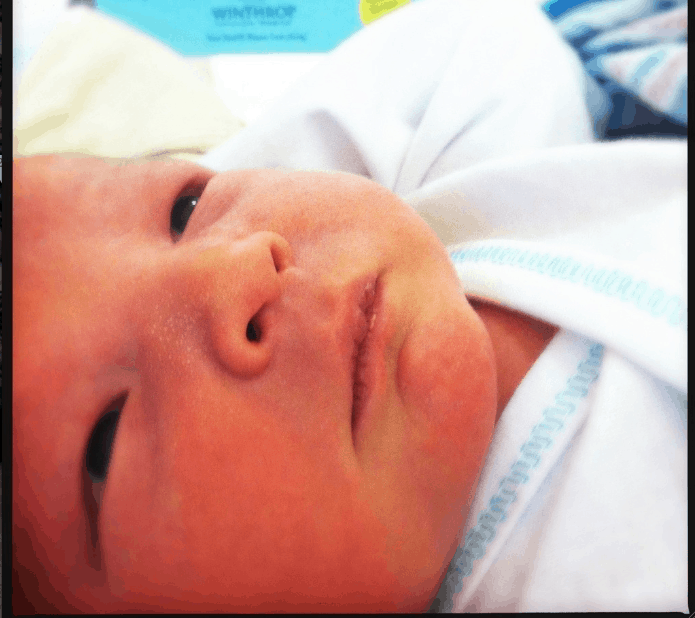 I think I was officially admitted somewhere around 11PM. I didn’t start pushing until about 6AM. Maybe even a bit later. The epidural helped for the beginning stages but once I got towards 8 or 9 it did absolutely nothing. I felt everything. Lord help me… I felt everything.

At one point, I was screaming at the staff “USE A TOOL – SUCK HIM OUT! I DON’T CARE HOW – HELP ME!” That’s when everyone started to gear up. Apparently, women say really crazy things right before delivering. LOL. The doctors that delivered me were very nice and supporting. I was thankful to have them in there. Unfortunately, no one in my practice was available to deliver that day – so everyone was brand new. But to be honest – at that point – WHO CARES?????????????? lol

Had a SERIOUS TURN for the worse after delivery. You know my blood pressure is normally LOW. I stay around the 90/50 range which is perfectly fine. Once the baby was out and I started to bleed I guess… I crashed. I was 74/38 at one point. I sort of almost blacked out and all I remember is people screaming my stats and the doctor pumping me with several rounds of 10ccs of SOMETHING. Whatever it was worked. They brought me back up to a normal range and I was able to keep my eyes open again. So scary.

I was able to VBAC – which I am so grateful for. I didn’t get my tubes tied because I was in such bad shape that I couldn’t imagine having the surgery the following day. I just wanted to be done with getting ripped apart. LOL. I’m passing that ball over to Bill. Hopefully he won’t give me an issue.

They gave me a full bag of pitocin AFTER the birth to help my uterus contract back down to size. I was in MAJOR PAIN THE ENTIRE DAY. It felt like end of labor contractions and were REALLY consistent. DYING. But two days later and that has passed too. Everything passes and you forget, right?

Some friends and family came to see me the DAY I delivered and I was literally cross-eyed. I couldn’t speak. I was SOOOOOOOOOOOOOO drained. Wiped out after everything and I really just wanted to sleep. 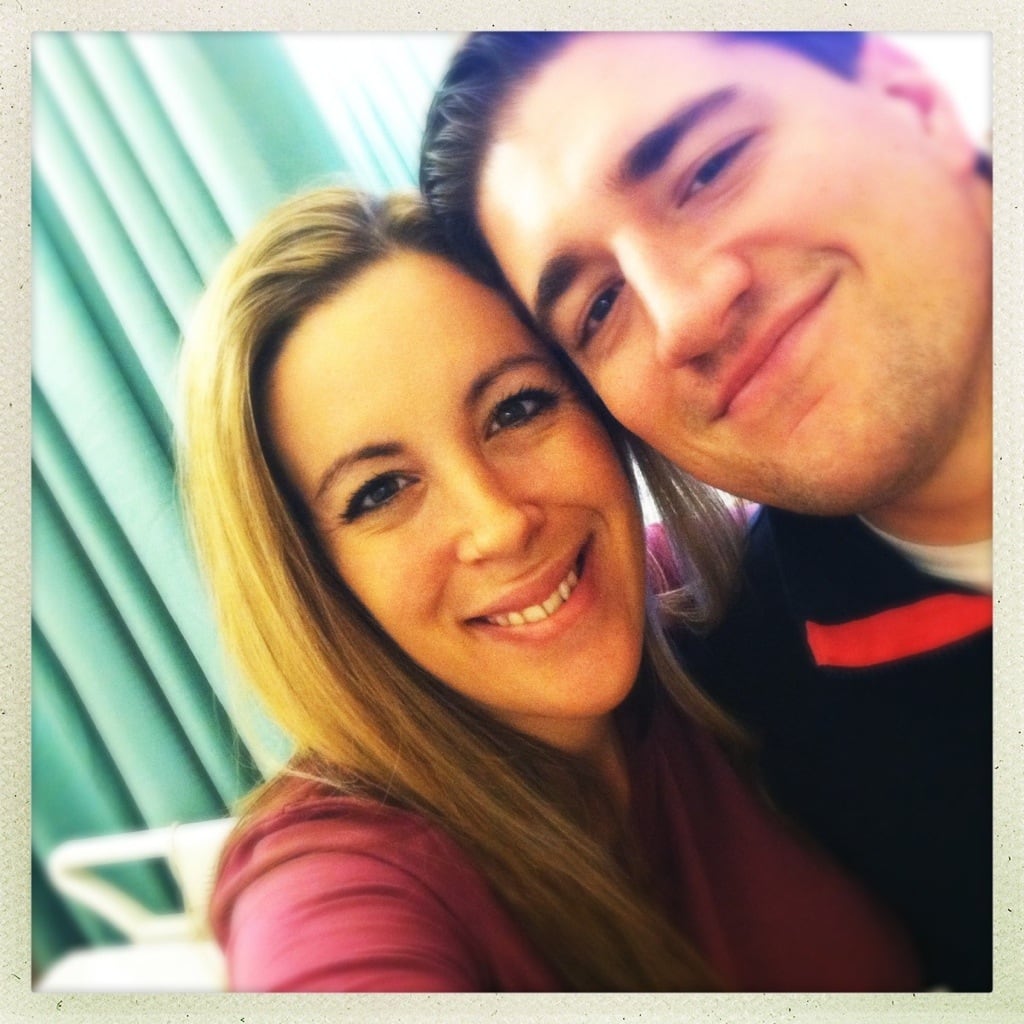 But like I said – everything passes. I felt much better on Monday. Sunday was a recovery day as well obviously. But it’s nothing like a C section. If I had to have another C, I would be out for the count for 6 weeks. I did NOT heal well from that the last time.

I can’t say enough how thankful I am that I VBAC’d. Made a world of a difference. 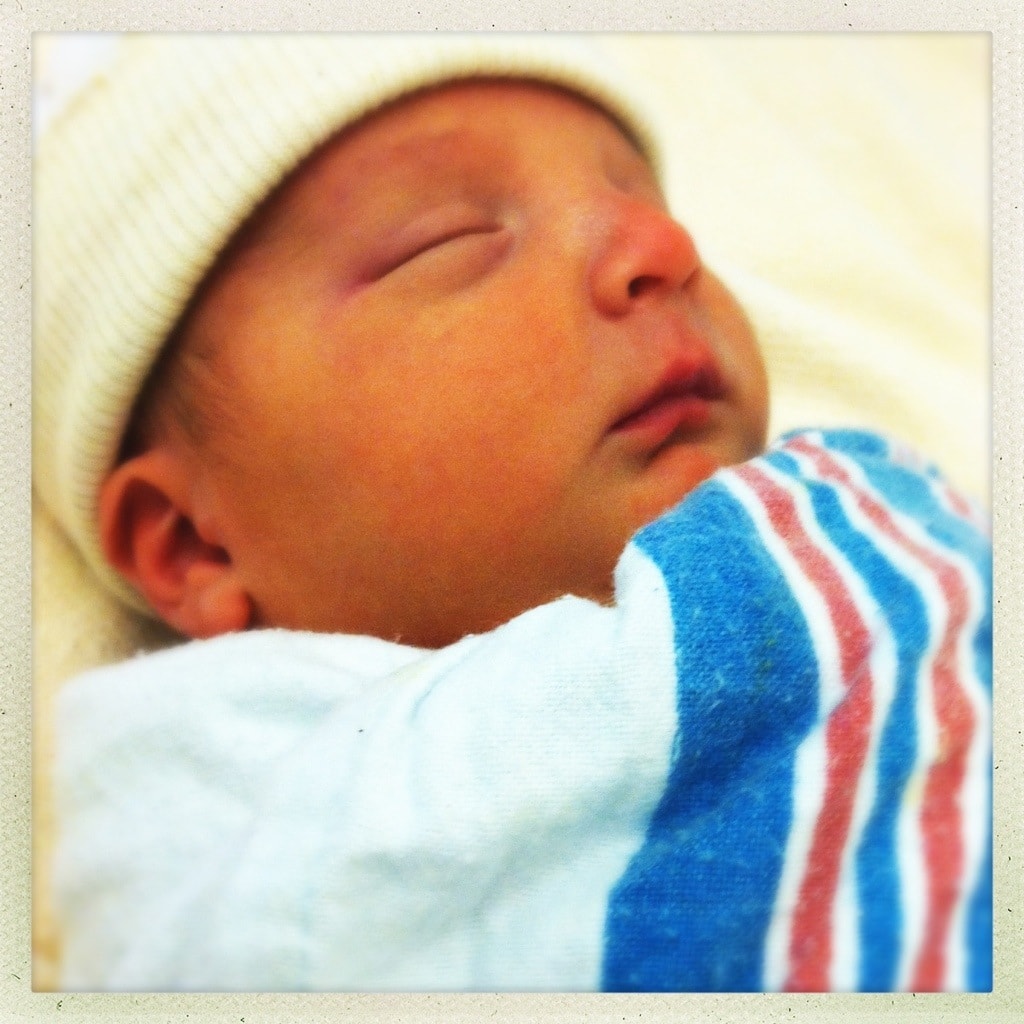 And so now I get to take a ba-billion pictures of this little guy. I can’t stop snapping. I am obsessed with him. All the rules I had with my first two – the ones that made them good sleepers and eaters – out the window. This little guy has me wrapped around his finger. I think it’s because I know that he is my absolute last one. I want to savor every last bite. 🙂 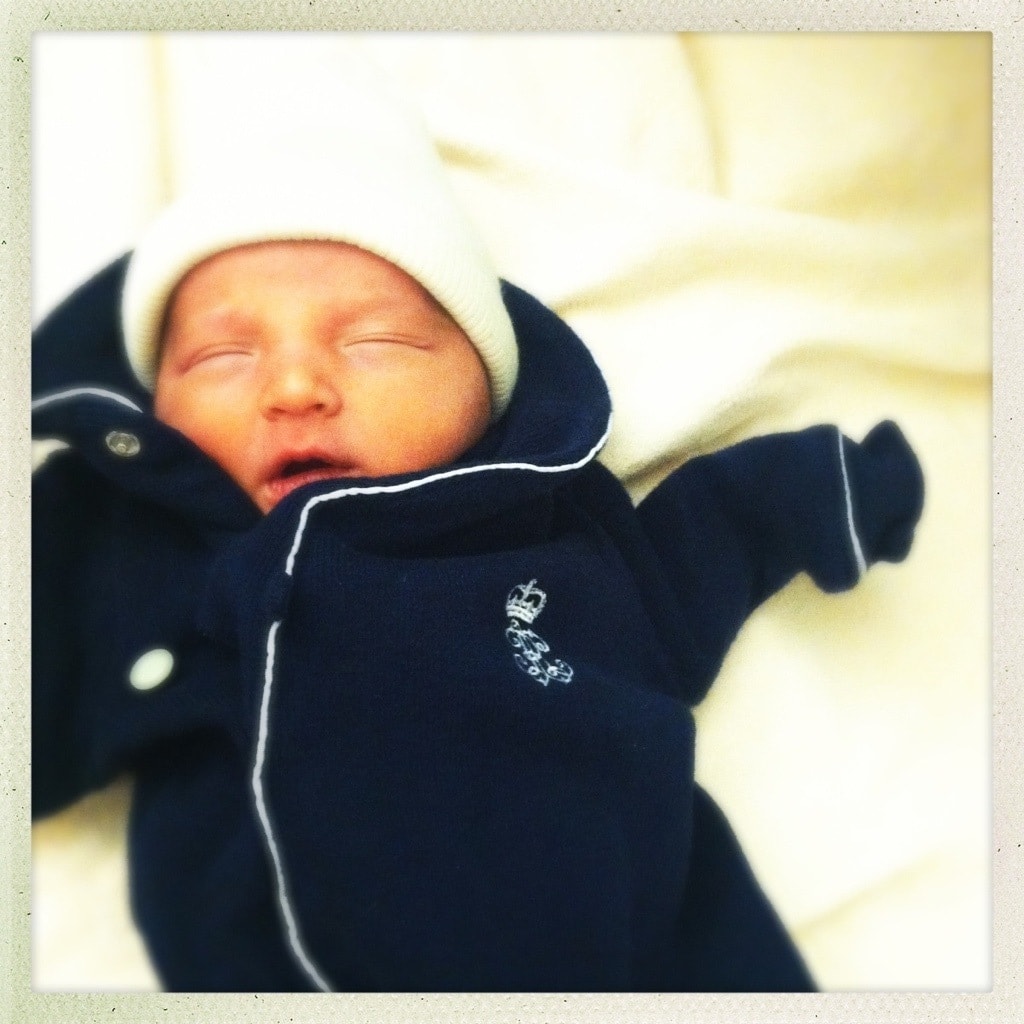 Dismissal came (and another horror that I won’t get into thanks to the NA assigned to my room), we dressed him up in his “going home” outfit. I’ve been holding onto this Ralph Lauren number for AGES. I was so EXCITED to get it on Caleb. He lost a little weight in the hospital … so it’s a little big. Everything is a little big. I can’t believe he is so small. When we left, he was 7 pounds, 10 ounces. To MOST that’s a BIG baby but to me… it’s a runt. LOL! 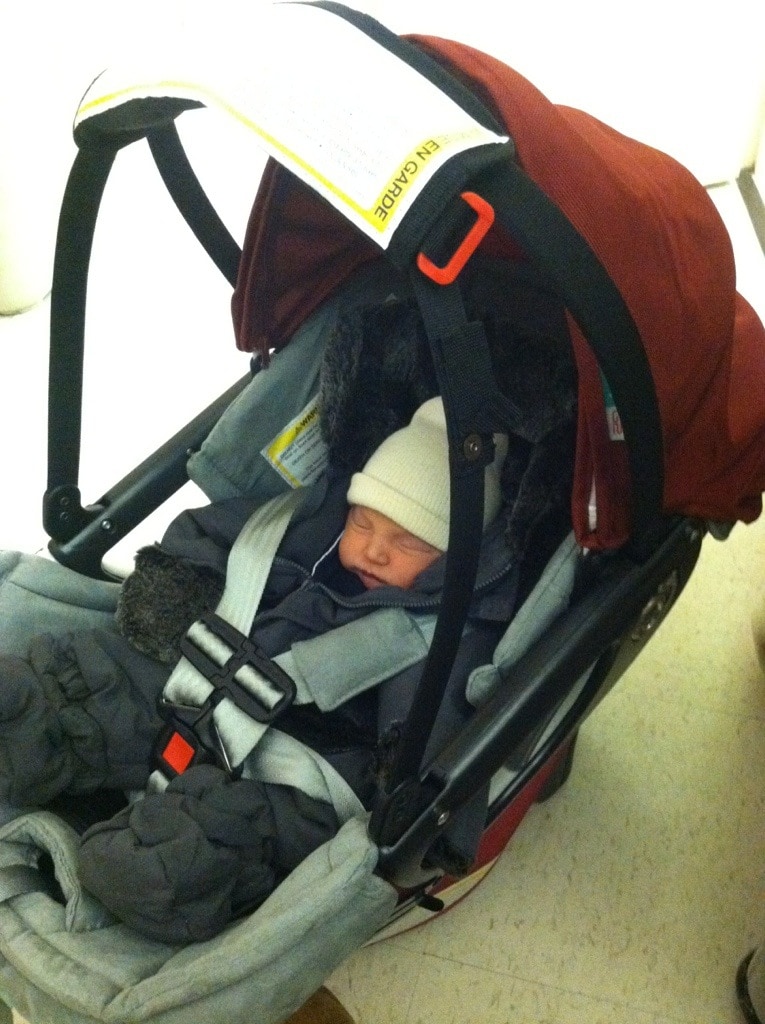 We bundled him up because it was FREEEEZZZZIIINNNNGGGG. Holy Moly it was cold yesterday!!! Felt like 3 degrees with the windshield. This was also the first time we were able to use our Orbits car seat. I’ve been looking at that box for 5 months now. It’s so official!! We have a baby that needs it. LOL 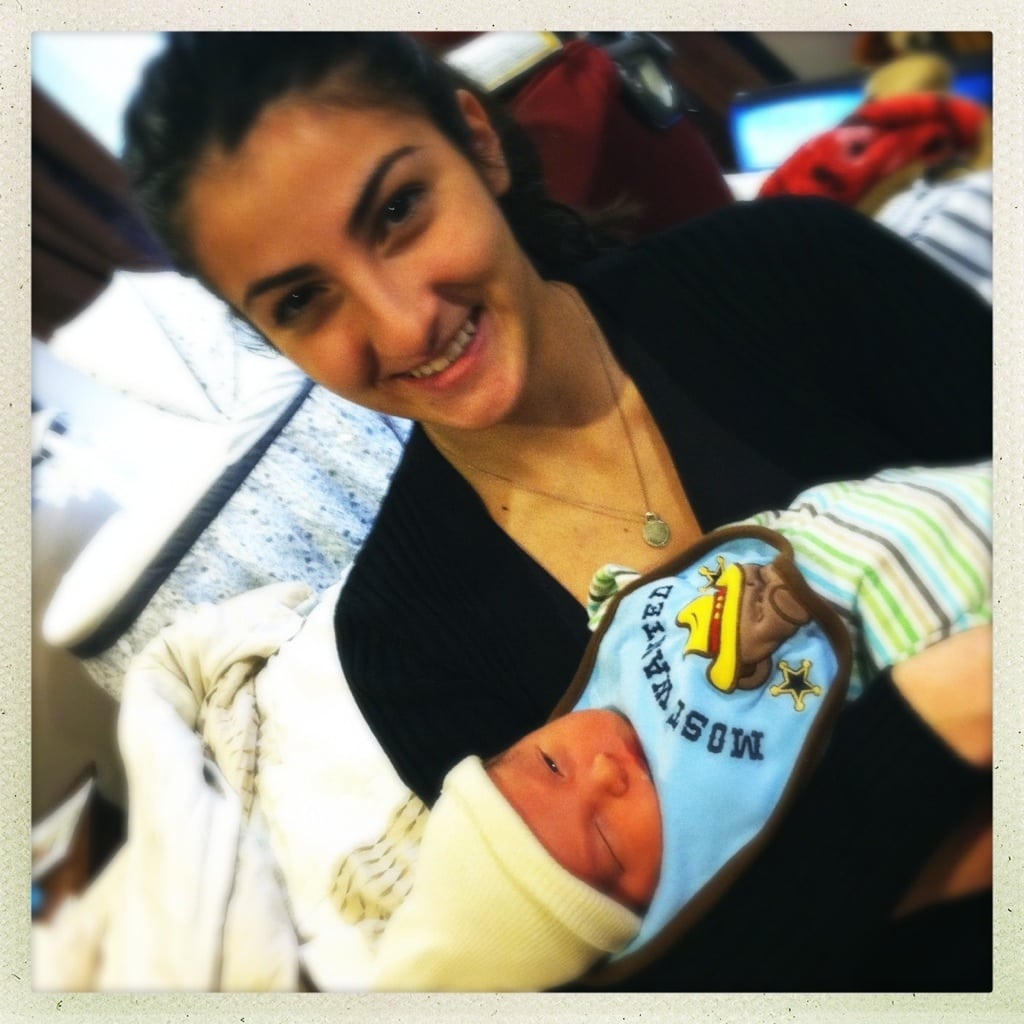 I got home and some family was there waiting to greet us. I felt totally terrible but I kicked everyone out. I just wanted to shower and I know Bill wanted to rest. It was a very long weekend. They love me so I think they understand. At least I HOPE they do. 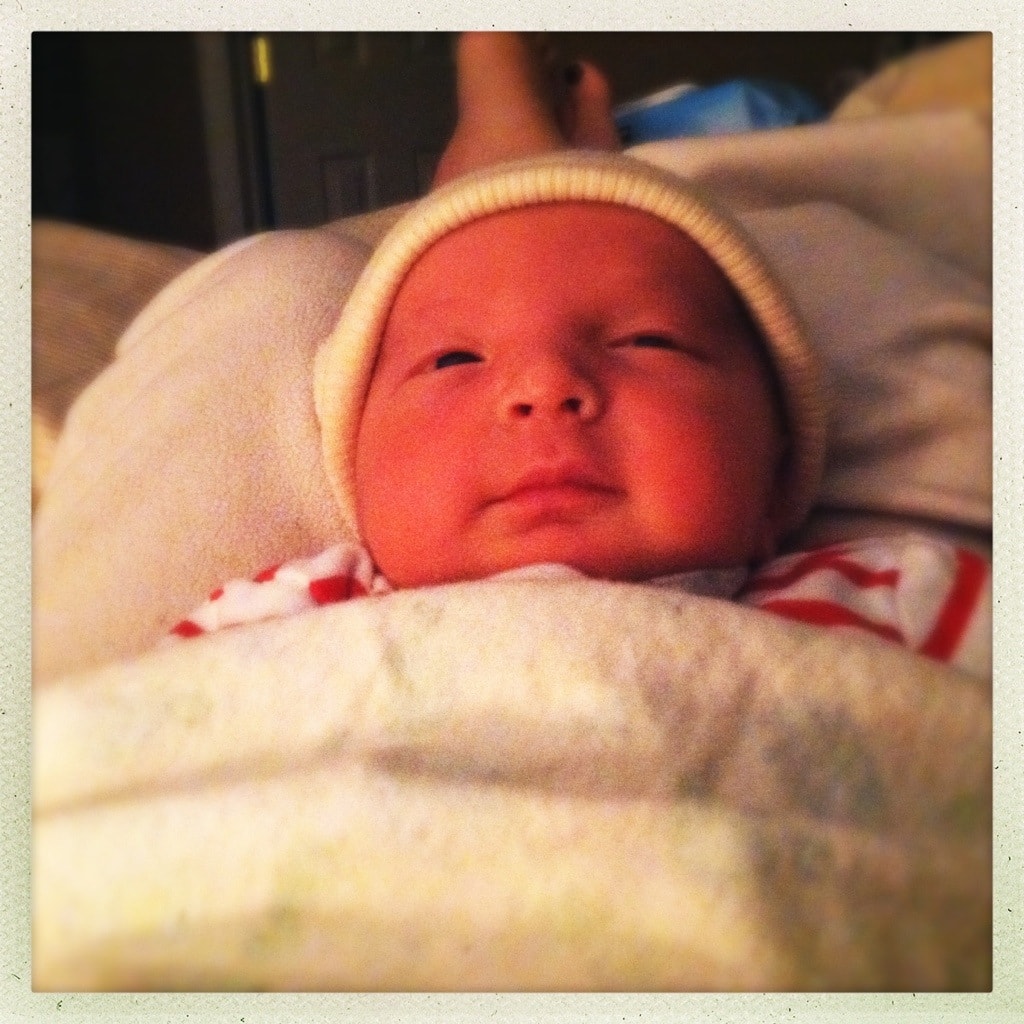 And then the fun began – sleepless nights are in our horizon. But I’m not complaining. I’m going to embrace it all. It’s like the last ride at an amusement park before it’s time to go home. You don’t hold onto the handle bar. You keep your eyes wide open and you take in every second of the fun.

I cannot say enough how thankful I am to be allowed on this journey once again.

Congratulations!!!! You do look so gorgeous and happy in all your pictures, I agree with Betsy it's a bit criminal..lol Sorry for a bit of the negative things that happened, you sound just like I did when I had my last little one. You will be so consumed with your new little man that all of that will fade in time. I'm so happy for you and your family, kind of makes me sad at the same time....been there done that, just four short years ago. I too had my last son and it just goes by too fast. So I thank you so much for sharing, it allows me to enjoy some of your joys of having a baby all over again. What a TRUE blessing it is, the good and the bad, savor each and every moment :0) BTW..it's totally PERFECT that he has you wrapped around his little finger ;0)

OMG How did I miss this?! Congratulations to you all! He's beautiful- I mean handsome :)

Enjoy every moment with that sweet baby. (Like you don't know this already- but they grow so quickly!) I'm still wondering what happened to my infant- 17 months later.. Ahh so happy for you and your family! Welcome party of five!

Thanks for sharing Vera I'm so happy for you and your family! I'm sorry about whatever negative things happened such a downer on what should be all joy! Enjoy every second with your new little guy.

haha of course we understand! =) Love you!

Congratulations! It must have been tough dealing with new staff, especially with those who gave you a hard time and for the one you'll be filing a report about (yikes!). My doctor was on vacation went I went into labor with my second-born, but thank goodness the covering staff was great. I still have asked my doctor at every prenatal visit with this pregnancy if he'll be there this time, just in case...

He's a beautiful baby, and a wonderful addition to your family. Congrats again!